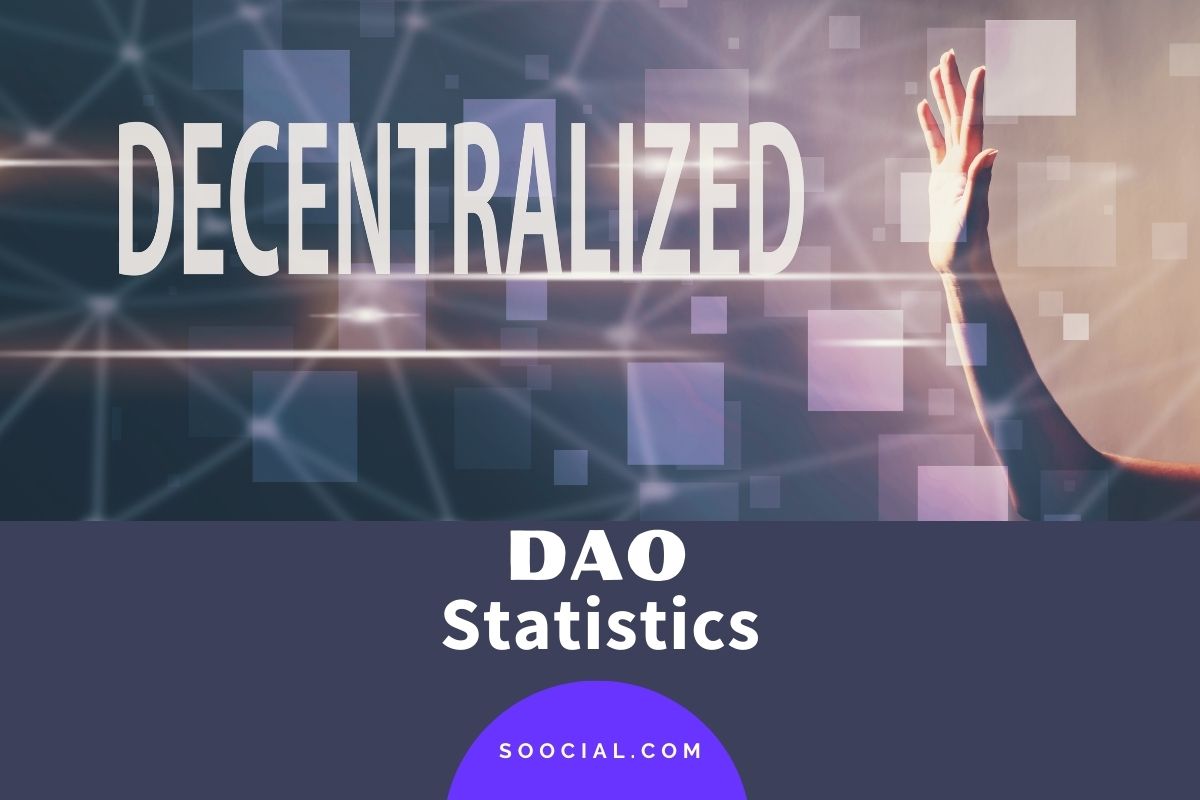 Decentralized Autonomous Organizations aimed to decentralize power in organizations from a top hierarchy to stakeholders or token holders, mostly individuals. Think of DAOs as companies but as a part of the blockchain ecosystem. These DAOs would then give voting rights or power through the sale or transfer of their tokens. More the token that an entity holds, the higher would be its voting rights.

As of now, DAOs are in their developmental stage, and they have not served a significant purpose in the real world. However, attempts have been made to use DAO for purposes such as venture funding, creating an NFT marketplace, social media site, and even buying a copy of the Orignal US Constitution!

Contents show
Decentralized Autonomous Organizations (DAO) Stats
1. The total market capitalization of DAOs is ~$21 billion
2. The top 5 DAO tokens hold a market cap of ~$13.2 billion
3. There are nearly 1.7M governance token holders and 497k active voters in the DAO ecosystem
4. Nearly 47k decisions made and 2.5M votes have been cast in the Dao ecosystem
5. DAOs prefer holding native tokens over non-native tokens
6. Ethereum is the most preferred token in the DAO ecosystem
7. Around 17000 people raised ~$50M to buy the US Consitution using a DAO
8. The first DAO raised $150M in 21 days from 11,00 investors
9. ‘The DAO’ hack nearly lost $60M to hackers
10. Nearly 35-40% of initial DAO token allocation is made to VCs, teams, and protocol companies.
11. There are about 65 DAOs with a treasury of more than $1 million
12. DAO market treasury tanked by ~$4.5B in three months
Conclusion

While the DAO market is pretty niche, naive and new, here are some insightful statistics that give a brief insight into DAOs.

1. The total market capitalization of DAOs is ~$21 billion

As of January 2022, the total market capitalization of all DAO tokens stood at ~$21B. In the same period, the total number of DAOs in the ecosystem stood at 4227. Nearly 182 of these DAOs tracked by deepdao.io held a treasury value or AUM of around $10B.

3. There are nearly 1.7M governance token holders and 497k active voters in the DAO ecosystem

Uniswap had the highest number of governance token holders at 307.7k, followed by Kusama at 235.1k and Decentraland at 215.1k. The three DAOs combined held or issued nearly ~42% of all governance tokens in circulation.

4. Nearly 47k decisions made and 2.5M votes have been cast in the Dao ecosystem

According to deepdao.io, as of January 2022, a total of 47.1k decisions have been made within the DAO ecosystem and nearly 2.5M votes have been cast since its inception.

6. Ethereum is the most preferred token in the DAO ecosystem

According to deepdao.io, Ethereum is the most used token in the DAO Ecosystem. Out of 181 DAOs listed on DeepDao, nearly 97 DAOs used Ethereum. This would mean that owning Ethereum would give you voting rights in more companies than holding any other token.

The ConstitutionDAO that failed to place the winning bid has now given the token holders and option to refund. Nevertheless, the market cap of ConstitutionDAO is at a staggering ~$450M as of January 2022 (Source: CoinMarketCap). This is nearly nine times the ~$50M that it had initially managed to raise.

By May 2016, Nearly 14% of all ether tokens(ETH) at the time were invested in The DAO. ‘The DAO’ was eventually shut down after an attack due to vulnerabilities in the codebase.

Generally, the blockchain network is considered to be safe or nearly ‘hack-proof’. However, in June 2016, ‘The DAO’ was attacked due to vulnerabilities in the code base, resulting in the transfer of 3.6m Ether(ETH) worth $60M, a third of nearly 11.5M ETH committed to The DAO.

The DAO later ‘hard forked’ the protocol and managed to recover all the tokens. The Securities Exchange Commission then released a report on ‘The DAO’ that can be accessed over here.

10. Nearly 35-40% of initial DAO token allocation is made to VCs, teams, and protocol companies.

This shows that a large percentage of DAO tokens are reserved for VCs, teams, and protocol companies.

The more tokens an entity holds, the greater its voting power. These ‘entities’ might not be part of the crypto world and have a monetary interest at stake.

11. There are about 65 DAOs with a treasury of more than $1 million

The social sentiment for DAOs is also in the red. According to Google Trends, the interest for the topic ‘Decentralized Autonomous Organization’ declined significantly after the new year.

The market for Decentralized Autonomous Organizations is at an infancy stage, and there are a lot of factors that could affect the price, voters, and token holdings in the DAO. Thus, DAOs are volatile and unpredictable.

In summary, DAOs are growing in popularity, both within the cryptocurrency community and amongst startups. Although it is still too early to determine whether or not DAOs will become a mainstream business model, it is clear that there has been significant growth in the number of new DAOs.

It’s clear that this space is really taking off, so hopefully, this has given you a better understanding of how DAOs work, what they do, and how they impact the world around us.

While the information supports the benefits of DAOs, it also reveals that not all of them are successful. If you want to launch your own DAO, ensure you have sufficient funding, support and expertise.

We hope you’ve enjoyed reading this list! We feel like we’ve just scratched the surface of what’s possible with DAOs. There’s still so much more to learn and explore.

We’d love to hear your thoughts on the statistics. What do you think? What’s the most surprising statistic? Where do you see DAOs going in the next few years? Let us know directly via email!

335 NFT Names to Transform Your Art Into a Digital Empire

24 Metaverse Statistics That Will Blow Your Mind (2022)