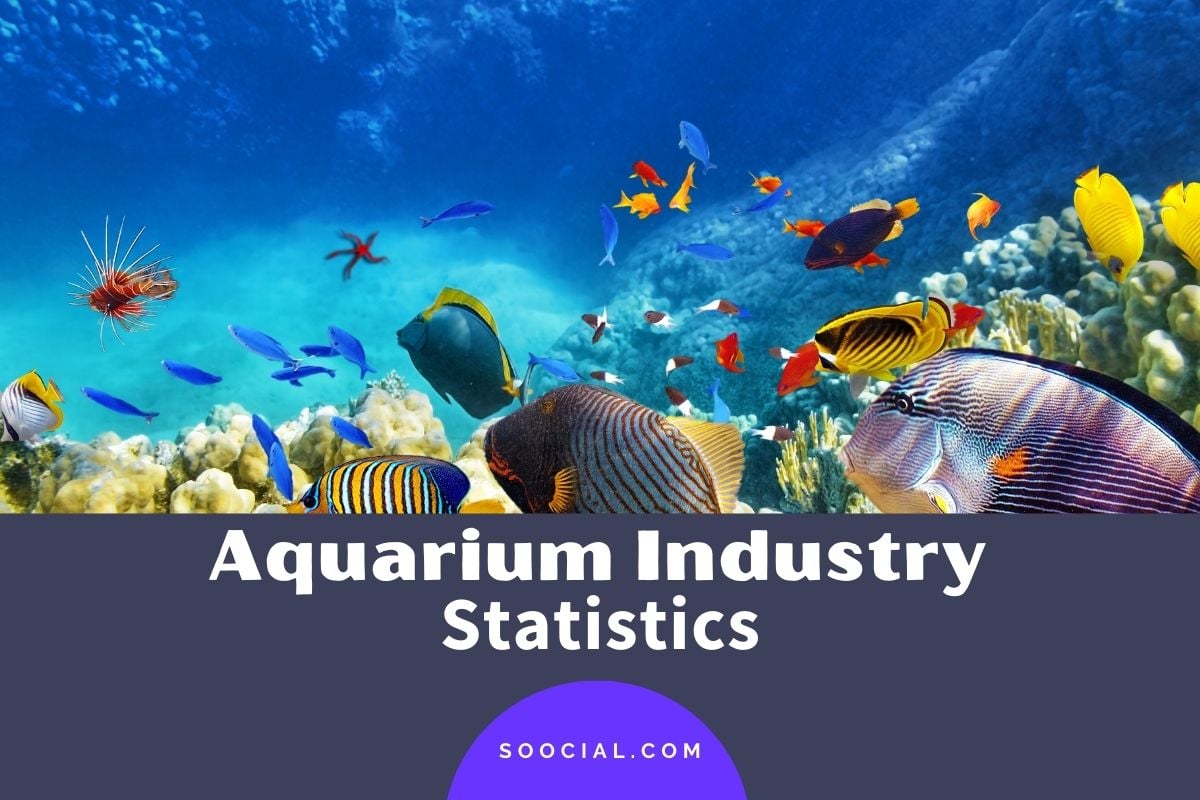 You could be forgiven for thinking that the aquarium industry is a relatively small one, but you’d be wrong!

In fact, the aquarium industry is booming.

Many hobbyists are fascinated with keeping a home aquarium and have gone beyond the basic fish tank to add more exotic and unusual species.

When it comes to fish, both saltwater and freshwater species are kept, with goldfish, guppy, betta, and angelfish being the most popular ones. Beyond that, aquarium enthusiasts also keep other animal species in their tanks, including snails, crabs, shrimps, frogs, and turtles.

So in support of all things aquatic, we’ll elucidate the most interesting and useful aquarium industry statistics.

In 2019, the sector had a value of $2.55 billion, which means a growth of 1.8% by 2020. Many factors contribute to the industry’s growth in market size — individuals looking for animal companions during the COVID-19 pandemic and technological advancements in the aquarium industry, to name a few.

In the United States, the pet fish category is the biggest of the non-dog and cat pet categories when it comes to sales. Its growth even ranks in the middle of the category. According to trends, households with girls are the key demographic that contributed to the growth of the market.

As we see, more households keep freshwater fish than saltwater fish. This is because the former is less expensive and easier to maintain than the latter.

4. In the US, 60 percent of the 25 most popular marine animals are invertebrates.

Of the 25 top-sellers, only nine are vertebrates; the rest are invertebrates. To be specific, the Blue Leg Hermit Crab tops the list. This species, with the scientific name of Clibanarius tricolor, is probably the top-seller because it is good at removing detritus, hair algae, film algae, and some kinds of cyanobacteria from your tank.

5. Georgia Aquarium in Atlanta is the largest aquarium in the United States

The Georgia Aquarium, in Atlanta, is the largest aquarium in the United States, and the third-largest in the world! It boasts more than 100,000 animals, including whale sharks, bottlenose dolphins, beluga whales, and more!

The aquarium was opened to the public on November 23, 2005. It has since become one of the most popular attractions in Atlanta, welcoming over 2.5 million guests each year.

In addition to this staggering market size, the industry is also expected to be valued at $21.15 billion by 2027. This is the result of an estimated compound annual growth rate of 7% from 2021 to 2027.

With the wide application of the industry, from houses to zoos and oceanariums, and the innovative products, this projected growth in market value is not far from happening.

7. An estimated 700 million visit aquariums and zoos globally every year.

The World Association of Zoos and Aquariums, or WAZA, records over 280 zoos and aquariums in more than 50 countries worldwide. A typical year would bring an estimated 700 million people to these zoos and aquariums.

However, this number has been dramatically affected by the COVID-19 pandemic, when strict lockdowns caused non-essential businesses to close down.

8. The Chimelong Ocean Kingdom in China is the world’s largest aquarium.

Aquariums, or fish tanks as they’re sometimes called, are a fun and interesting way for people to view aquatic animals—including fish, reptiles, and mammals—in a safe and controlled environment. They’re also great for the animals, giving them a place to hang out that is full of food sources, without having to worry about being eaten by larger creatures. But what’s the largest aquarium in the world?

The largest aquarium in the world is China’s Chimelong Ocean Kingdom with a total of 48.75 million liters (10.72 million UK gallons; 12.87 million US gallons) of water. It also has an underwater viewing tunnel that measures 68 feet long! The aquarium holds 15,000 marine animals, including some rare ones like dugongs and sea otters.

It is also home to the largest underwater viewing dome in Asia and the world’s largest acrylic panel—measuring 39.6 meters wide by 8.3 meters high (130 ft × 27 ft).

9. The global reef aquarium market size is projected to reach $11 billion by 2028.

A reef tank or reef aquarium prominently showcases live corals and marine invertebrates in addition to fish to replicate the natural coral reef environment.  With an estimated compound annual growth rate of 10.7%, the global reef aquarium market size is expected to be valued at $11 billion by 2028.

The development of advanced designs in aquariums, such as aquascaping and planted tanks, paved the way for market growth in the industry.

A key factor to the global growth in the reef aquarium market is the growing interest that Millenials have in keeping ornamental fishes in aquariums to complement a luxurious lifestyle. Apart from that, the COVID-19 pandemic and the resulting lockdowns increased people’s need to have an animal companion.

In addition, fish tanks generally require less space, so keeping a fish is a practical option.

11. In the global market for aquariums, residential reef aquariums make up 43% of all sales.

One of the best parts about owning an aquarium is that you can set them up in any style you like. One of the most popular styles is known as a reef aquarium—it’s just like it sounds, a tank that contains coral and other kinds of marine life you’d find in the ocean.

The residential use of reef aquariums is currently on the rise since it improves the aesthetics of a home. Additionally, the technological advancements in the aquarium industry have caused the number of aquarium enthusiasts to rise.

When you break down the statistics, it’s not hard to see why keeping a home reef is such a popular hobby. Homeowners with reef aquariums love seeing the bright colors and unique shapes of their fish and corals. They also enjoy the social aspect of searching for new fish and learning more about the best ways to care for them.

The zoo and oceanarium end-user segment is expected to grow in the coming years at a rate of 11.5% every year, making it the fastest growing segment.

Although its current revenue share is surpassed by that of the residential use of reef aquariums, the zoo and oceanarium end-user sector has the fastest anticipated compound annual growth rate in the coming years. This is fueled by the public’s growing interest in visiting aquatic zoos and oceanariums as a form of recreational activity.

Europe held the largest revenue share (32.2%) of the global reef aquarium market in 2020, followed by North America and Asia Pacific. On average, reef livestock is exported or sold at $5 to $150 per piece.

While Europe’s large share is likely due to a greater number of hobbyists, it’s also important to note that the region has favorable conditions for reef aquariums, including a high level of income and growing popularity as a destination for scuba diving vacations.

Additionally, coral farms being developed in Europe contribute to the regional market growth. For example, the first commercial coral farm in Europe grows around 5,000 corals per year.

The report predicts that the Asia Pacific region will be the fastest growing region due to increasing demand for exotic marine life.

The ornamental fish market involves a broad species of fish. However, it’s mainly categorized as marine and freshwater fish. Ornamental fish is primarily produced in Asia, with some species being bred in captivity and others being caught in the wild.

With a growing number of households worldwide that keep an aquarium, it’s no wonder a huge percentage of ornamental fish are being kept in this setting as opposed to commercial settings. In 2015, the ornamental fish used for residential purposes reached 529 billion tons, making up 73.19% of the world’s consumption.

16. More than 2,500 species are involved in the ornamental fish industry worldwide.

An estimated 60% of these species come from freshwater. Although the industry relies heavily on freshwater fishes that are bred in captivity, it also includes some wild invertebrates and fish.

When it comes to freshwater fish, around 30 species seem to dominate the market worldwide. This includes livebearers, angelfish, neon tetra, goldfish, and discus, to name a few.

17. Marine fish creatures account for 15% of the total value of the ornamental fish industry.

In addition to this percentage, an astounding 98% of marine ornamental fish being sold in the market are caught in the wild, while the rest are bred in captivity.

Marine fish are more expensive and harder to maintain compared to freshwater fish, but they’re still becoming increasingly popular, specifically in Europe and the US.

With the growing interest in ornamental fish, its health benefits, and the numerous technological advancements in the industry, these statistics are hardly surprising.

19. In 2019, Japan was the top exporter of live ornamental fish, comprising 12% of the total exports in the market.

20. In 2019, the United States had the most imports of live ornamental fish, making up 17.6% of the total imports in the market.

Singapore is the largest exporter of ornamental fish to the US, comprising 16.2% of the exports to the country.

How big is the aquarium industry?

A factor that adds to this undeniable growth is the aquarium industry’s varied applications, such as residential, commercial, zoo, and oceanarium.

Is the aquarium industry growing?

In recent years, the aquarium industry has shown significant growth, and it will continue to grow in the coming years. As mentioned above, it is estimated to have a CAGR of 7% until 2027 and will possibly reach a global market value of $21 billion.

With recent advancements in aquarium technology, a rising number of aquarium hobbyists have been noted. Additionally, with its many health benefits, fishkeeping has gone beyond just having something to decorate your living room.

Which country is the largest exporter of ornamental fishes?

According to the Observatory of Economic Complexity, 12% of the total live ornamental fish exports in 2019 came from Japan. It ranked number one in countries with the highest value of live ornamental fish exports ($41.8 million). Unsurprisingly, this island nation also has one of the most aquariums per capita. Indonesia came next, with a total export value of $39.8 million.

Thanks for sticking around to the end! We hope you’ve enjoyed this list—and if you feel like we’ve missed anything, or would like to share your own experiences in the aquarium industry, we’d love to hear from you.

We know that a lot of people are really passionate about fish and aquariums, and we’re excited to see what this industry has in store for the future. If you’re thinking about starting your own aquarium business, or joining one already in existence, we hope this list of statistics helps put things into perspective for you.

We’ll do our best to keep bringing you the most up-to-date data on what it means to be in the aquarium industry so that you can stay on top of your game.