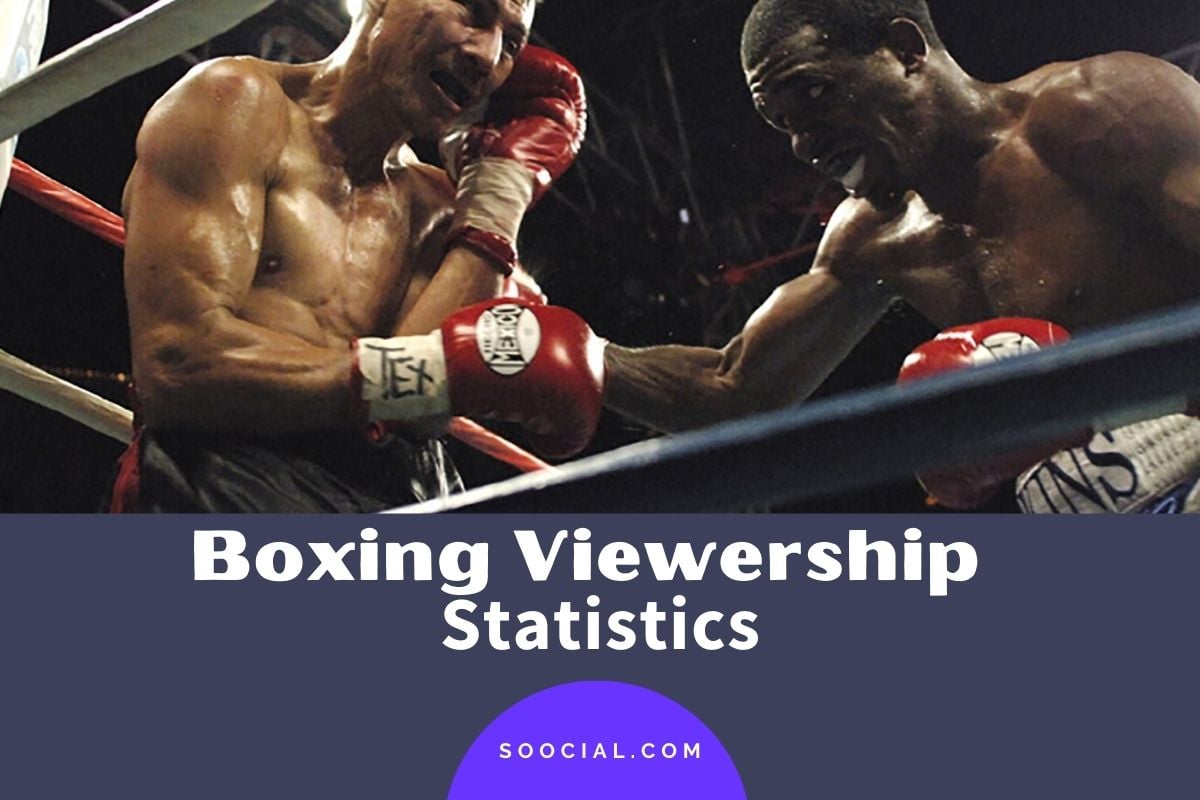 In this blog post, we are going to be talking about the sport of boxing, which has been around for over 5,000 years and remains popular in several parts of the world today.

For starters, it probably isn’t surprising that boxing is one of the oldest sports in the world. It was one of the original Olympic events and has a rich history dating back thousands of years. What might surprise you, however, is how popular this sport is today!

You will get to learn more about many things like:

Let’s take a look at some staggering boxing viewership statistics.

Contents show
Boxing Viewership Growth Statistics
1. The UK has shown the most interest in boxing over the last 5 years
2. Boxing viewership is growing in LATAM
3. Interest in boxing is growing among younger audiences
4. Boxing was the fourth most popular sport in America in 2021
5. In the UK, 15% of people regularly watch boxing
6. 43% of men in the UK prefer to watch boxing live
Boxing Viewership Demographics Statistics
7. Only 20% of American men are avid fans of boxing
8. The average age of boxing viewers is increasing
9. Hispanic viewers are more likely to watch boxing than MMA
10. 44% of boxing and MMA fans are female
How Popular is Boxing as a Sport?
11. Boxing is the second most popular sport in the world among young people
12. Boxing stayed popular during the pandemic
13. 28% of Americans say they’re fans of professional boxing
Which Boxing Matches Drive the Most Viewership?
14. Mike Tyson is the most recognized boxer among viewers
15. The highest-grossing boxing event of all time earned $410 million in revenue
16. Jermall Charlo vs Juan Macias Montiel achieved the highest viewer numbers of any boxing match released by Showtime during the pandemic
17. Boxing viewership on PBC Fight Night Increased by 12% between 2018 and 2019
Conclusion
Sources

1. The UK has shown the most interest in boxing over the last 5 years

A Google Trends analysis of the term “Boxing” reveals some interesting insights into which countries are most likely to watch boxing around the world. According to Google, the United Kingdom had a search interest score of 100 in the years from 2017 to 2022.

2. Boxing viewership is growing in LATAM

The Global Web Index Report on sports popularity around the world acknowledges differences in boxing viewership throughout different regions of the world. For instance, boxing doesn’t appear at all in the top five sports for North America and Europe. However, in the Middle East, it’s the 5th most popular sport, with 42% of internet users watching matches regularly.

3. Interest in boxing is growing among younger audiences

The UMass Lowell Center for public opinion worked in collaboration with the Washington Post to survey 1,000 American adults on their opinions towards sports. This was the first release in a series, covering which sports viewers support in the modern world.

Alternatively, the smallest percentage of fans of boxing (17%) were in the age group of people 65 and older.

4. Boxing was the fourth most popular sport in America in 2021

A Harris Poll survey reported by Boxing Junkie and Forbes indicates interest in boxing in the United States may be greater than many people realize. The report asked 2,072 American adults whether they considered themselves to be a fan of certain sports, including baseball, hockey, basketball, golf, and various others.

5. In the UK, 15% of people regularly watch boxing

Harris Interactive conducted a poll with 1,000 representative members of the UK in 2019, to learn more about the state of sports viewership in the country. In this report, Boxing fell just below the index of the top 10 sports, coming in at position 11, just above horse racing, rugby league matches, basketball, martial arts, and netball.

Interestingly, MMA, which is often combined with boxing in many surveys today, was deemed much less popular than boxing. 15% of participants in the study considered themselves to be a fan of boxing, which involved live viewing and watching sports events.

In collaboration with the Quick Surveys platform, Harris Interactive looked at the viewership statistics surrounding popular sports in the UK.

According to the report, boxing was one of the most popular sports to watch live among men and women. However, men were significantly more likely to watch boxing live and in-person than women.

7. Only 20% of American men are avid fans of boxing

Research seems to show a diminishing interest in boxing in certain parts of the world, particularly in America, where some people regard it as a sport for older people.

A Statista report published by David Lange looked at insights from 2,200 adults respondents in America to determine how US citizens feel about boxing.

According to the report, only around 20% of the men in America would identify themselves as avid fans of “men’s boxing” matches. Alternatively, around 50% of respondents said they had no interest in the sport at all.

8. The average age of boxing viewers is increasing

According to Market Watch’s analysis of the average of consumers watching various kinds of sports, the average age of boxing viewers is increasing.

Notably, Market Watch also found the average of viewers for virtually all of the sports they looked at has increased except for in one area (WTA Tennis), where the age of viewers has fallen.

9. Hispanic viewers are more likely to watch boxing than MMA

A report conducted by the Sports Business Journal and reported by Boxing Junkie in 2019 indicates Hispanics may be more interested in boxing than most.

The research into boxing viewership found the median age of boxing and MMA is the same (49 years old), but that the balance of people who watch either boxing or MMA varies according to their background.

Around 22% of white adults said they supported MMA, making the mixed martial arts landscape more popular than boxing (only 17% of white adults). Alternatively, among Hispanics, 61% claimed to be boxing fans, compared to only 31% who were fans of MMA.

A report on the demographics of MMA and boxing fans published by CEO and founder Bob Ciosek in 2019, found around 44% of the audience for these sports is female. The report also indicates around 41% of the current audience is between the age of 25 and 34, which is a highly coveted demographic in the sporting world, thanks to a higher amount of disposable income.

Further insights into the demographics of fans of boxing and MMA found that around 65% of the viewers of this sport make less than $75,000 per year.

Additionally, the majority of the audience appears to be white or Caucasian (60%), while the number of viewers in the Hispanic/Latino and Black/African American category is growing.

How Popular is Boxing as a Sport?

11. Boxing is the second most popular sport in the world among young people

The Global Web Index notes that boxing as a sport has grown significantly in recent years, with the addition of new talent that younger viewers can relate to. However, interest in boxing diminishes among older age groups.

12. Boxing stayed popular during the pandemic

Despite arguments about boxing’s rising or falling popularity around the world, studies have shown viewership remained high for the sport during the pandemic. An average of 699,000 people watched the third fight between Joe Frazier and Muhammed Ali in 2020, for instance.

An assessment of the continuously positive numbers surrounding boxing viewership in the pandemic by Forbes indicated big names like Muhammed Ali and Floyd Mayweather often help the sport to continue attracting viewers in difficult times.

A poll conducted by the UMass Lowell Center alongside the Washington Post looked at the attitudes American adults held towards sports prior to a crossover MMA and boxing event schedule in 2017.

According to the study, around 20% of Americans identify as “avid sports fans”, while 26% say they’re regular fans, and 35% are casual fans. Only around 19% said they weren’t fans of sporting events at all.

Which Boxing Matches Drive the Most Viewership?

14. Mike Tyson is the most recognized boxer among viewers

Despite an increasing number of new fighters in boxing, the Harris Poll looking at the popularity of boxing in 2021 found that most people aren’t familiar with newer fighters. This may indicate why certain names are likely to drive additional revenue from pay-per-view sales.

According to the Harris Poll, Mike Tyson was the most recognized boxer among 89% of respondents, followed by Muhammed Ali at 88%. Floyd Mayweather only earned the third spot in terms of recognition with 79%, despite extremely high viewing figures in the last decade.

The Harris poll noted many of the most recognized boxers asked about in the survey were already retired, which might indicate a reason for declining viewership among older fans.

15. The highest-grossing boxing event of all time earned $410 million in revenue

According to a World Sports Weekly graph highlighting some of the highest-grossing pay-per-view boxing fights of all time, the most significant fight in the last couple of decades earned a massive $410 million in PPV revenue. This was the Floyd Mayweather vs Manny Pacquiao fight which took place in 2015.

The fight with the second-largest PPV revenue also featured Floyd Mayweather against Conor McGregor in 2017, earning a revenue of $396 million.

According to this report, Mayweather’s fights account for four out of the five highest-grossing pay-per-view events in recent history. The fifth spot belongs to the fight between Mike Tyson and Lennox Lewis in 2002, earning around $112 million in pay-per-view revenue.

16. Jermall Charlo vs Juan Macias Montiel achieved the highest viewer numbers of any boxing match released by Showtime during the pandemic

A study conducted by Nielson for the boxing industry and reported by Boxing Scene found the most-watched boxing match released by the Showtime channel during the COVID-19 pandemic, as of June 2021.

The event with the biggest viewership was the fight of Jermall Charlo against Juan Macias Montiel, which achieved an average of 333,000 viewers for the 12-round event.

A peak audience of approximately 379,000 viewers watched towards the end of the fight. These numbers only account for the viewers who watched the fight live on the linear channel offered by Showtime. Viacom CBS doesn’t release streaming numbers online.

According to RingTV and Fox, the number of people watching boxing continued to increase somewhat between the years of 2018 and 2019. For the calendar year of 2019, the famous “PBC Fight Night” event telecasting on Fox averaged a total of 1,403,000 viewers.

According to the report, this is 35% better than the numbers for the USPN UFC fight night event, and 103% better than ESPN’s top-ranking telecasts for boxing. Additionally, the numbers represent an increase of 12% over viewership numbers in 2018 (1,245,000 viewers on average).

Thanks for taking the time to read this deep dive into boxing viewership statistics.  We’ve come to the end of our journey. But before we say goodbye, we want to share a few final thoughts with you.

We came across some amazing stats on boxing viewership, and also found that boxing viewership is on the decline. It’s clear that boxing is losing viewers, but we’ve learned many new things about the sport, its fans, and what the future might hold as fans are always eager for more ways to keep up with their favorite boxers and matches.

Of course, we’re always looking for more boxing-universe knowledge, so if you have any stats we should add to our list, let us know. We love hearing from you!

As always, thanks for reading.

675 Fitness Class Name Ideas To Get Your Heart Racing