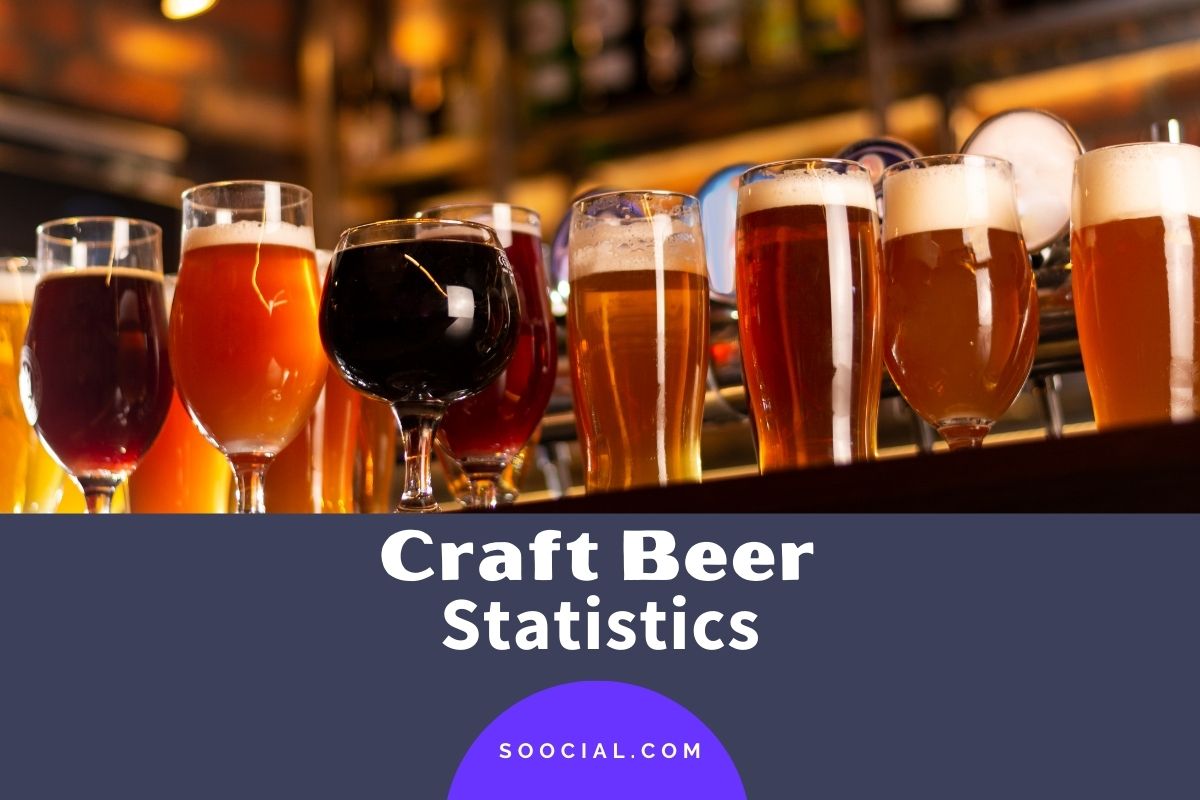 We don’t know if you’ve heard, but craft beer is totally having a moment. It’s the fastest-growing segment of the beer market, and it’s generating a ton of buzz in the media.

But if you’re like us and you’re always looking for new ways to learn about beer, then here’s something that will make your day: we’ve got the latest super interesting craft beer statistics right here!

If you’re looking to learn more about craft beer as a whole, or even just as a consumer, this is a great place to start. You may be surprised by some of the trends and statistics that have emerged in this industry over the past decade. If you’re interested in starting your own craft brewery or brewpub business, there are also some important statistics that can help you get started.

If you’re an investor who wants to get into the industry on a smaller scale than starting an entire brewery or brewpub yourself, this article is also helpful because it outlines some of the major financial benefits associated with investing in craft beer companies.

It’s not water or tea, yet beer is surely one of the most popular beverages in the world. While regular beer is what you’ll typically find on grocery store shelves, craft beer tends to be the top choice for those with exquisite taste.

Craft beer also sets various trends and boasts some exciting statistics. We handpicked the top ones below.

These figures and facts are just the tip of the iceberg when it comes to craft beer stats. Scroll down to dive deeper into the consumption trends, demographics, and habits of microbrewed beer.

According to the latest data provided by the Brewers Association on US beer sales, total beer sales went up only 1% in 2021.

Craft beer sales had a better run considering they jumped nearly 8% or 7.9% to be exact. With this movement, the American beer market share held by microbreweries reached 13.1%.

This figure represents a 21% dollar growth. The overall beer market in the country was $100.2 billion, meaning 26.74% of it comes from microbreweries.

3. Nearly two-thirds of the craft beer industry production volume in the US comes from regionals.

These breweries contributed 65.7% to the total craft beer production volume. They were followed, far from closely, though, by microbreweries (18.4%) and taprooms (8.1%).

Only 6.4% of the production volume came from brewpubs and even less, or 1.4%, from contract brewing companies.

Here’s the number of barrels (1 barrel equals 31 US gallons) produced by each of these craft beer breweries.

4. The number of craft beer breweries in the US has been steadily growing in the past decade.

Yet, there’s been an impressive increase in the number of breweries ever since.

Among these nearly 10k breweries, there are:

5. Most craft beer brewery owners in the United States are white and male.

The Brewers Association for Small & Independent Craft Brewers conducted a survey focused on the owner demographics of breweries.

Moving on to owner demographics by gender, two-thirds (75.6%) of craft beer brewery owners were male. The remaining 23.7% and 0.2% of owners were female or non-binary. Only 0.6% chose not to answer this question. It’s interesting to note that 41.4% of the breweries have at least one female owner, whereas only 2.9% were 100% female-owned.

6. Blue Moon was the leading craft beer brand in America by sales.

Craft beer has been on the rise in the United States, so multiple brands offer this product. Only one of those, however, boasted sales of nearly $400 million in 2020. This was, of course, the craft beer giant Blue Moon, whose 2020 sales reached $396.64.

Only one other craft beer brand had sales throughout the United States of over $300 million – Sierra Nevada. This company sold craft beer worth $324.02 million.

The top three craft beer brands by sales list is rounded up with New Belgium, Samuel Adams, and Lagunitas. These companies generated sales of $299.38 billion, $236.41 billion, and $204.52 billion, respectively.

7. California, Pennsylvania, and Florida produced the most craft beer barrels in the US in 2021.

According to the craft beer data by state collected by the Brewers Association, Mississippi produced the least or 21,283 barrels of craft beer.

South Dakota and North Dakota produced 23,068 and 24,270 barrels throughout 2021. These figures got them the second-last and third-last positions on the list.

West Virginia was the only other American state that produced under 40,000 craft beer barrels, with its production of 24,684.

9. Vermont, Maine, and Montana have the most craft beer breweries per capita by state.

While California is the leader in producing craft beer, other states lead the way regarding microbreweries per capita.

10. Mississippi, Louisiana, and Alabama have the fewest craft beer breweries per capita by state.

Louisiana, Alabama, and Utah are also at the bottom of the list, with respective numbers of microbreweries per capita of 1.3, 1.4, and 1.8.

11. The share of American adults who drink craft beer has been slowly growing yearly.

In 2018, 40% of American adults who can legally consume alcohol reported drinking craft beer. This share has been growing over the years, but not too drastically.

12. Fewer Americans purchase craft beer brands that they have never heard of before.

In 2015, more than one-third (37%) of US craft beer consumers would purchase unknown brands. This share has been declining over the years.

This shows that marketing will have to play a significant role for newly established microbreweries if they want to sell their product.

About half or 51% of craft beer consumers from this income group reported drinking the beverage weekly. By comparison, the share of weekly craft beer drinkers among those making $100k or more is 47%.

15. American adults between 21 and 44 are the most common weekly craft beer drinkers.

Here are the results of what share of microbrewed beer drinkers from various age groups consume the beverage weekly.

As you can see from these numbers, about half the craft beer drinkers aged 21-34 and 35-44 consume it at least once a week. By contrast, only about one-third of those 55-64 and 65 or older share the same craft beer drinking habit.

If you’re interested in how CBD use correlates to craft beer consumption, there’s not much there. In a Statista survey analyzing this aspect, most age groups reported that their craft beer hasn’t changed due to CBD use.

Here’s the share of craft beer drinkers from each age group stating that CBD use does not affect their beer consumption.

For about a third (35.5%) of those 21-34, CBD use has increased the craft beer consumption, that’s something to note. Also, about a third (32.8%) of adults from the same group reported using both on the same occasion.

According to the Fortune Business Insights data on the craft beer market, the market size of this sector was $95.23 billion in 2020.

Data shows that European beer drinkers consumed 831 million liters of craft beer in 2012. This amount has been growing in the upcoming years and reached 931 million liters in 2013 and 1.05 billion in 2014.

The upwards trend continued, and in 2015 Europeans consumed 1.21 billion liters of craft beer. By 2016, the amount reached 1.39 billion liters, representing a four-year increase of 67.99%.

19. France, the United Kingdom, and Switzerland are the European countries with the most microbreweries.

In France, there were 2,000 craft beer breweries in 2020, while in the United Kingdom, there were 1,815. The third European country with the most microbreweries, or 1,159, was Switzerland.

These three countries were followed by Germany (901), Italy (624), and the Czech Republic (506). All the other European countries had under 500 craft beer breweries, with Malta being at the bottom with only one such beer brewery.

20. Most Australians think that the craft beer quality in the country is increasing.

In its annual Australian Craft Beer Survey, Beer Cartel analyzed the attitudes of Aussies towards craft beer. The results are pretty interesting and as follows:

21. Over half the UK adults understood the concept of craft beer in 2019.

While only 26% of Brits understood what craft beer is and consumed the drink in 2016, this number increased to 59% by 2019. This jump shows the rapid growth of popularity of this beverage among UK adults.

In the country, Camden Hells Lager leads the way when it comes to sales value, making about £40 million in 12 months. However, Brewdog Punk IPA is the top off-trade brand by moving annual total sales of more than £41 million.

The COVID-19 pandemic seriously hit the craft beer industry in the UK. Namely, in April 2020, independent breweries reported a massive drop in beer sales of 82%.

We hope you enjoyed this list of craft beer stats as much as we did—and that you now have a better understanding of the growing craft beer industry! We know that craft beer has really taken off in recent years, and we want to keep you informed about the industry as it continues to grow.

Overall, craft beer is a booming industry that seems to only be growing. With so many different breweries and styles of beer out there, there’s no reason not to try your hand at brewing your own. Whether you want to open your own brewery or just like making your own beer for fun, it’s an exciting time for craft brewers and consumers alike!

If you liked this article, please share it with your friends! Let them know how much they can learn about craft beer just by reading articles like this one.

Thanks again for reading and sharing this article with your friends and family. We appreciate it!

266 Beer Slogans and Taglines that Get the Party Started

285 Creative Brewery Name Ideas that Beg for A Taste