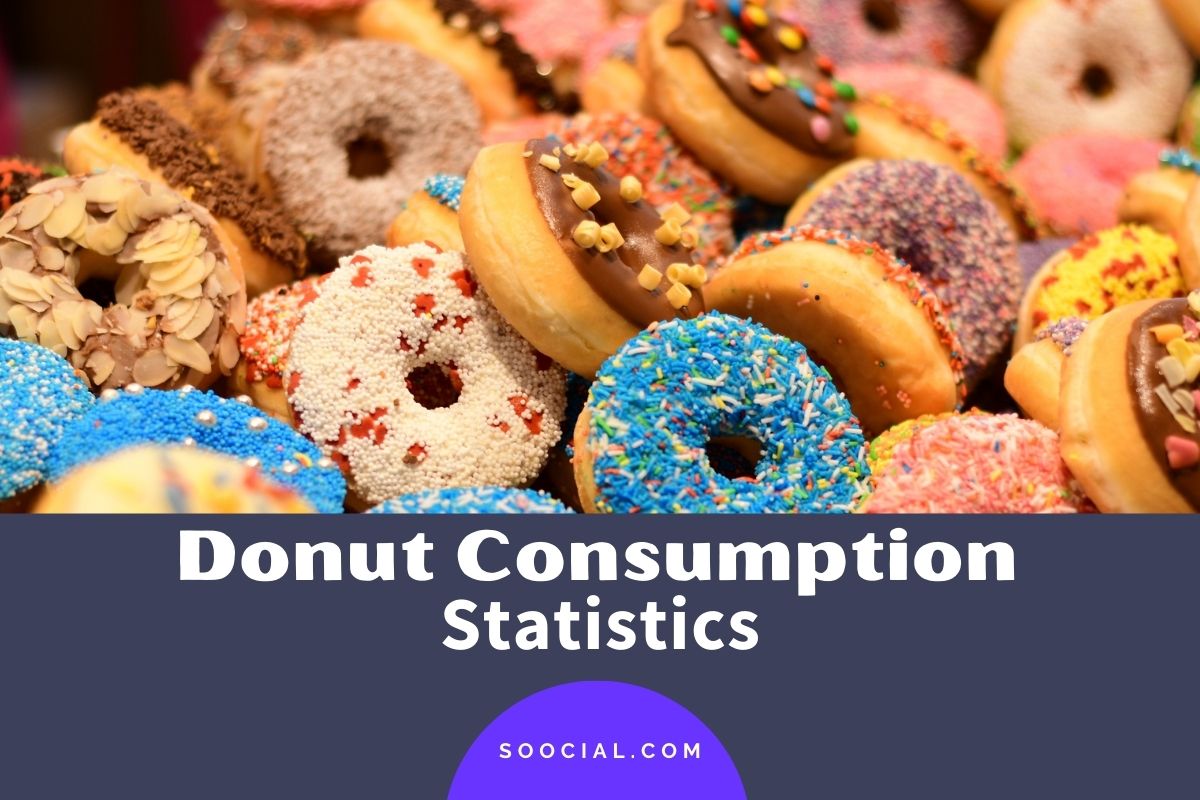 Hey, donut lovers! We have a sweet treat for you today. We’ve collected the latest donut consumption statistics from around the world, and we can’t wait to share them with you.

Heads up: This is not your average blog post. It’s a deep dive into the world of donuts—and we’re talking about everything from how many donuts are consumed per year in the United States, to how much money is spent on donuts every year. We’ve even included the top flavors of donuts that consumers like to eat and which country eats the most donuts (Hint: It’s not the US).

So what are you waiting for? Sit down and enjoy a sweet treat while you read up on what makes us all so unique when it comes to our favorite pastry!

2. There are around 203.09 million donut consumers in the United States.

The first time the number of donut consumers in the United States exceeded 200 million within the same period was in 2018 when it stood at 200.8 million.

If you’re looking for a sweet treat, there’s no denying that America has you covered: around 10 billion doughnuts are made in the US every year.

3. It is estimated that there will be around 207.31 million donut consumers in the United States in 2024.

4. The donut store industry market size in the United States is estimated to be worth $7.5 billion in 2022.

The above figure shows a 3.8% increase from the one recorded in 2021. When observing the period between 2017 and 2022, the market size (revenue) of the donut store industry in the United States has been growing at an average CAGR (Compound Annual Growth Rate) of 0.8%.

The industry is highly fragmented and competitive, with intense competition from well-known brands such as Dunkin’ Donuts and Krispy Kreme.

5. Donuts account for 35.6% of breakfast bakery product sales in grocery stores in the United States.

The latest data reveals that other sweet goods rank second with 30.6%, followed by muffins and bagels, respectively accounting for 24% and 9.8% of breakfast bakery product sales in grocery stores in the United States.

6. The average price of a donut in a restaurant in the United States stands at $4.92.

7. 50% of consumers in Poland buy American-style donuts at least once a month.

Another 15% buy this type of donuts at least once a week, while the portion of consumers in Poland who buy American-style donuts once every few months and less than once in three months stands at 17% and 19%, respectively.

8. Canadians eat more donuts per capita than people in any other country.

The United States may be the home of the donut, but Canada is the king of donuts.

Canadians love their donuts! In fact, Canada is the country with the highest donut consumption per capita.

There are many possible explanations for this, but one thing’s for sure: there’s no shortage of delicious donuts in Canada!

We’re not saying that’s a bad thing. There are plenty of reasons why Canadians love their donuts so much: they’re sweet, fluffy, and delicious. But it does seem like Canadians could cut back on their intake just a bit. Maybe… just try one less donut each week? What do you say 😉?

9. 46% of consumers eat donuts once to a few times a month or more.

Town and grocery store bakeries rank as the second and third most popular places to buy donuts, as agreed by 72% and 71% of consumers, respectively.

Have you ever wondered what age group is most likely to eat donuts?

Well, according to a recent study, the age group 30-49 years consumes the most donuts, closely followed by those aged 18-29 years!

Third place goes to 50-64 years old. These folks have been around the block a few times and know what they like: donuts! In fact, many of them grew up eating donuts as children and continue eating them today because they’re delicious and affordable, especially when you’re on a budget.

People in their 30s and 40s eat more donuts than any other age group does, but there’s also some strong competition from younger folks (18-29) when it comes to consuming these tasty treats!

The results are surprising, as one would have expected younger people to be more likely to eat donuts.

It could be that older people have more free time in which they can indulge in eating a donut.

Alternatively, it may be that younger people are more health-conscious and therefore do not eat as many donuts as older people do.

Either way, this is something worth noting if you’re going to be doing any marketing or advertising for your donut store or bakery.

12. The average American consumer eats about 31 donuts every year.

We know you love donuts. We love them too. That’s why we’re so excited to share this statistic:

It is estimated that the average American eats 31 donuts per year, so most Americans eat two to three donuts per month. In fact, more than a third of Americans (37%) eat at least one donut every month—and that’s just the people who admit it!

So whether you prefer your donuts dusted with powdered sugar or smothered in chocolate frosting—or if you’ve made it through life without ever eating a donut consider ordering some delicious donuts for your next party or event.

On average, such restaurants have nine different donut dishes on their menus. Still, in 62% of cases, donuts are sold at designated shops.

14. 51% of consumers buy chocolate-frosted donuts a few times or more per month.

15. Being a favorite in 15 states, glazed is the most popular donut type in the United States.

Apple fritters and donut holes share the third place, as favorites in three states each. Apple fritters are the favorite type of donut in Connecticut, Oregon, and Washington, while donut holes are most loved in Iowa, Maine, and Mississippi.

Blueberry donuts are consumers’ favorites in Indiana and Ohio, while Missourians and consumers in North Carolina are mostly after cinnamon twists. Consumers in the District of Columbia and Rhode Island mostly opt for crullers, while chocolate-glazed donuts are the most preferred ones in Georgia and Tennessee.

Old fashioned donuts are consumer favorites in Minnesota and Nevada, while consumers in Michigan and Wyoming are mostly after paczki. Consumers in Pennsylvania and Texas mostly opt for powdered donuts, while sugar-covered donuts are a favorite in Utah and Virginia.

16. Cream-filled donuts are the most popular kind of donuts in America.

According to data from a recent poll, Americans love all things donuts. Cream-filled donuts (22%) have long been a favorite, but they’re not alone: plain glazed (18%), chocolate glazed (12%), plain cake, and jelly-filled (9% each ) are also popular favorites.

So what are you waiting for? Order yourself a box of cream-filled donuts today and get ready to celebrate! 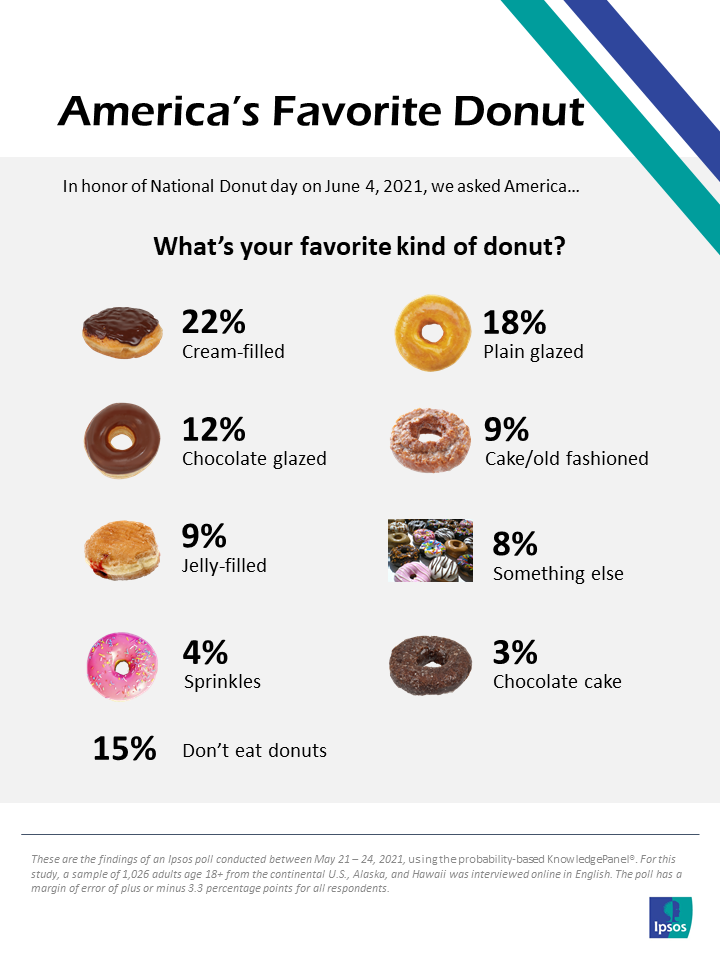 The second most popular reason for buying donuts is their taste, as agreed by 70% of consumers. 57% get them for breakfast, 55% buy them as a treat for family and/or friends, while 48% get them as a snack.

With healthier alternatives being donuts low in sugar, carbs, and fat, with no high-fructose corn syrup, and enriched with protein and fiber, 72% of consumers agree they should taste the same as donuts they would typically buy.

31% of consumers say that, if available, they would purchase healthier donut alternatives, while another 32% could see themselves eating more donuts than they do now.

When it comes to the reasons why consumers would purchase healthier donut alternatives, 82% would buy them because they taste similar to donuts they typically buy but are better for them, while 71% put still feeling like they’re indulging as the main reason.

19. Bulk or 1-count donuts account for 36.4% of the total donuts sales in the United States.

6-count donuts are the second most popular at 18.5%, followed by 12-count and donut holes or mini donuts, respectively accounting for 16.8% and 16.1% of donut sales.

At only 3.9%, 2- to 5-count donuts are the least popular, while all other types account for 8.5% of the total donuts sales in the United States.

Have you ever had a Krispy Kreme glazed donut when you were feeling a little down in the dumps?

Well, it turns out that’s not an uncommon occurrence. In fact, according to a study by Yelp, Krispy Kreme glazed donuts are a favorite of America’s heartbroken, along with other classic treats like ice cream, pizza, and cake.

So if you’re looking for a way to get over your ex and feel better about yourself, we recommend treating yourself to some delicious Krispy Kreme donuts!

Statistics on Donut Manufacturers and Vendors

But one of the most interesting facts about donuts is their sheer ubiquity. In the U.S., there are 18,010 donut shops. That’s a lot of donuts!

Donuts come in all shapes, sizes, and flavors—and they’re made from many different ingredients. Some are deep-fried while others are baked; some use cake batter while others use yeast dough; some are glazed with chocolate or frosting while others have sprinkles or nuts on top; some are filled with cream cheese or jelly while others have fresh fruit inside them (like apples).

You can find donuts at local bakeries as well as grocery stores throughout America’s neighborhoods—and even on the side of roadways when they’re sold by street vendors!

23. With over 63.83 million consumers, Dunkin’ Donuts is the most-eaten brand of donuts in the United States.

24. Dunkin’ Brands is the leading producer in the donut industry in the United States.

As per the latest available data, Dunkin’ Brands accounts for 15.16% of the total revenue generated by the donut industry in the United States.

The list of the top producers is rounded by Krispy Kreme and Tim Horton’s, which account for respective 4.65% and 4.43% of the total donut industry revenue in the United States.

25. There are 9,421 Dunkin’ Donuts establishments in the United States.

Accounting for 11% of the total number of Dunkin’ Donuts establishments, Massachusetts has 1,089 of them, or a location for every 6,329 people in the state.

26. 11 US States and Territories don’t have a single Dunkin’ Donuts location.

27. With 212 of them, Chicago is the city with the highest number of Dunkin’ Donuts establishments in the United States.

The list of cities in the United States that have more than a hundred Dunkin’ Donuts establishments is rounded by New York, Brooklyn, and Philadelphia, with 166, 138, and 131 establishments, respectively.

The list of the top 10 vendors making the most in donut sales in the United States is rounded by Clydes Delicious ($29.6 million), United States Bakery ($28.3 million), Bon Appetit Danish ($24.2 million), and Carolina Foods ($14.4 million).

That’s a lot of data and an even bigger takeaway: donut consumption is on a steady rise. We expect them to continue to grow in popularity as they become more and more available at all times of the day (and why not?).

If you have any questions about these statistics or anything else donut-related, please feel free to reach out! We’d love to hear from you!

In the end, donuts are a treat. They’re meant to be enjoyed and enjoyed often! So what are you waiting for? Go out and get yourself a donut today—maybe even two!

465 Donut Shop Name Ideas That Will Make You Hungry