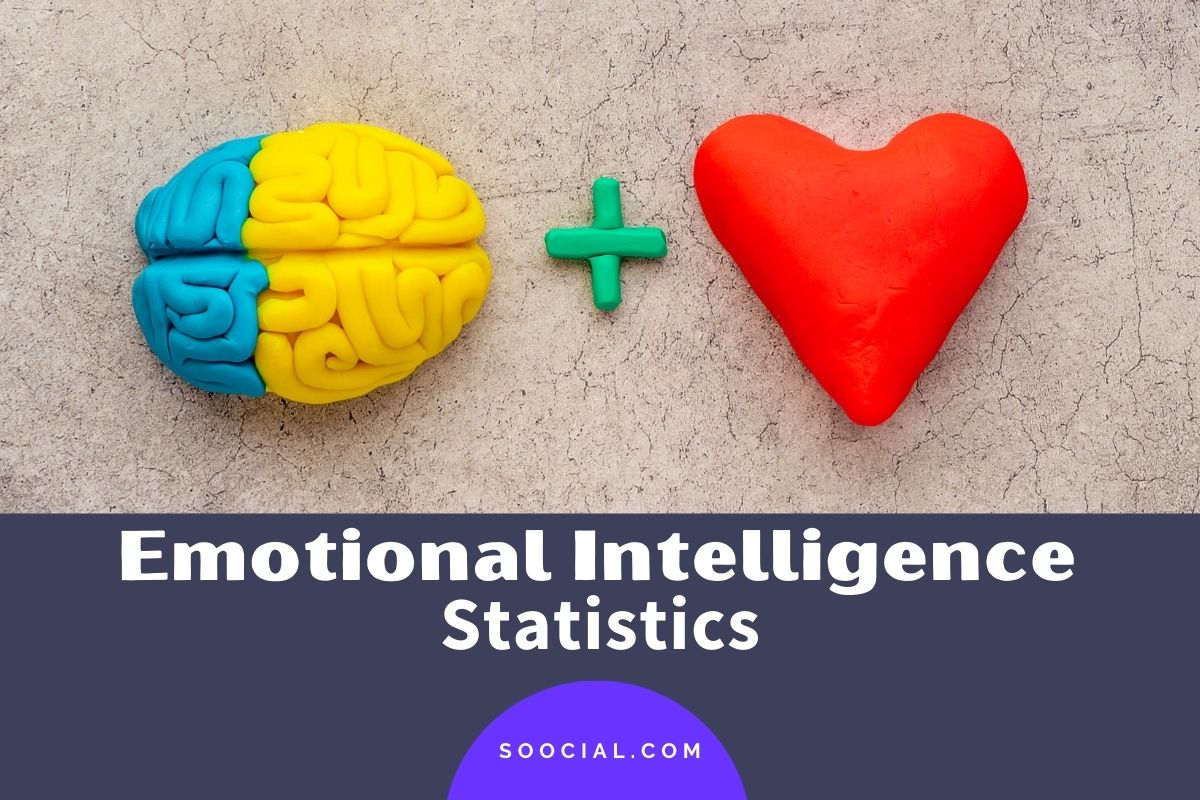 Have you heard about emotional intelligence? There’s a lot of talk about it, but what does it mean, and why should you care?

If you’ve ever wondered how important EQ really is, or what its impact is on the workplace, your relationships, or even your health, this blog post is for you! We want to share everything we know about EQ with you so that you can take control of your mood and be the best version of yourself!

Sounds pretty good right? So why don’t we all just take some pills and be done with it? Well, while there are medication options for mood disorders like anxiety and depression, there aren’t any magic pills for EQ. But the good news is that there are things you can do to improve your emotional intelligence.

It seems a lot of people are in denial, according to this research by Tasha Eurich, an organizational psychologist.

Self-awareness is about knowing who you are and how you are perceived. It is crucial for career success, leadership effectiveness, and job performance. However, it looks like it isn’t commonplace in today’s workplace.

2. 99% of working American adults report working with at least one person who isn’t self-aware.

In a survey involving 467 working adults across several industries in the US, nearly all of them have worked with at least one person who lacks self-awareness. On top of that, nearly 50% of the same respondents reported working with at least four such people.

3. Peers were reported to be the most unaware colleagues, with 73% of American workers reporting having at least one unaware peer.

It looks like you don’t have to search far to find an unaware colleague. On top of having unaware peers, 33% of American employees reported having bosses who aren’t self-aware, and 16% reported having such clients.

4. Employees with high EQ scores earn an additional $29,000 on average per year than those with lower EQ.

5. Every additional point in your EQ score means an additional $1,300 to your yearly salary.

Although IQ scores can also help determine someone’s proficiency in their career, having high EQ scores seems to be the bigger factor in determining success. That said, developing your emotional intelligence seems to have monetary rewards as well.

6. 75% of the Fortune 500 companies use emotional intelligence training tools.

7. EQ is four times more effective than IQ in determining who will be successful in their field.

A 40-year study of UC Berkeley PhDs showed that EQ is more powerful than IQ in determining a person’s success in their given field — four times more, to be exact.

Skills like active listening, stress management, and empathy are contributing factors to a person’s success. Even the smartest person can benefit from having a higher EQ score.

8. Technical programmers with EQ scores belonging to the top 10% can develop software three times faster than their low EQ colleagues.

This shows that even in jobs where you’d expect a lower EQ won’t matter as much, especially since they’re not client-facing jobs, it does still have an effect on productivity. Anyone can benefit from having high emotional intelligence — or at least conducting training to improve.

9. Leaders with empathy perform over 40% higher in employee engagement, decision-making, and coaching.

According to DDI, a global leadership development company, empathy is the number one skill that leaders have to be good at. Research shows that managers or employees in a leadership role are perceived to have better job performance when they are empathetic.

When leaders communicate to their direct reports with empathy, the team feels more supported, and individual members perform better.

How Does Emotional Intelligence Affect Companies?

10. Emotional intelligence has a 58% influence on job performance.

Aside from improving their employees’ skills, emotional intelligence has to be taken into consideration as well to improve their performance.

11. Restaurants managed by people with high emotional intelligence grow their profit by 22% each year.

With this statistic, there’s no denying that emotional intelligence impacts the profit growth of businesses. It seems that the key factors affecting productivity are emotional self-awareness, happiness, social responsibility, reality testing, and interpersonal relationship — all of which are components in emotional intelligence.

When emotional intelligence is incorporated in business operations, employees feel secure enough to speak up about their concerns, business-related or otherwise. They’re also more inclined to express their ideas since they feel more heard, thereby increasing employee engagement and decreasing attrition rates.

Employers may include emotional intelligence in their assessment when looking for employees who have leadership potential or who are next in line for a promotion or pay raise. You can still be a top-performing employee if you don’t have a high EQ score, but the chances are very slim.

On the other hand, high EQ employees made up only 20% of the bottom performers.

How Much Do Companies Value Emotional Intelligence?

14. 71% of hiring managers value EQ over IQ when looking for employees.

Companies understand that although having someone with strong hard skills is great, an employee with high emotional intelligence will be more valuable in the long run.

According to hiring managers, they’ve observed that employees with EQ are more likely to effectively and diplomatically resolve conflict, empathize with co-workers, and stay calm under pressure.

15. 59% of employers refuse to hire a candidate with a high IQ but low EQ.

People with a high IQ may have the hard skills necessary to be productive employees in the workforce, but if they have low EQ, they may be difficult to work with. That’s why employers aren’t willing to compromise. If someone has low EQ, they’re most likely not going to get hired even if they have a high IQ.

16. High EQ employees are favored over high IQ employees for a promotion 75% of the time.

Leaders with high emotional intelligence are more than likely to be productive and effective. They usually lead by example and give a lot of thought to business decisions. They also listen as much as they speak, which is a very good quality in employees in a leadership role.

Soft skills include problem-solving, stress management, communication, and adaptability. These traits are usually harder to teach than, say, teaching someone how to use Excel. It usually takes a lot of training to train someone to have better soft skills, but the result is worth it in the end.

19. Forty-four Fortune 500 companies found salespersons with high emotional intelligence had twice the amount of sales compared to those with low to average scores.

The Hay Group conducted a study on 44 Fortune 500 companies and found that salespeople with high EQ brought in twice as much revenue as those with low to average emotional intelligence. This is hardly surprising, though — an effective salesperson has to be able to understand the needs of the prospective client to provide the appropriate product or service for them.

20. A large hospital decreased its nursing turnover by 50% within 18 months of imposing an emotional intelligence screening assessment.

This large hospital had a nursing turnover rate of 65% prior to implementing the emotional intelligence screening assessment. Within 18 months, that rate dropped to 15%.

Employee retention has its benefits — reduced costs, lesser time and resources spent on training, improved employee morale, and increased productivity, among others.

21. A Fortune 500 company based in Texas that switched to an emotional intelligence-based assessment increased its employee retention by 67% in the first year.

This Texas-based Fortune 500 company had previously used personality assessment in their hiring process for many years, but it wasn’t doing much to reduce the turnover rate. When they switched to an emotional intelligence-based selection assessment, they started to see results.

In the first year, the company saw the following results — increased employee retention by 67% and increased company bottom line by $32 million in increased sales and reduced turnover costs.

22. A Dallas corporation found that its employees with high EQ scores were 20 times more productive than those with low EQ.

Keeping in mind the results of this recent study, we can conclude that any company can benefit from conducting emotional intelligence training among its employees to improve their EQ.

What percentage of success is emotional intelligence?

According to TalentSmart, among 33 other essential workplace skills, emotional intelligence is the top factor in workplace performance, expounding that it contributes to 58% of any professional’s career success.

What is the average EQ score?

While the perfect EQ score is 160, the average ranges from 90 to 100. People with a high EQ score tend to be better at understanding and empathizing with others. If you have an EQ score that’s below average, you can increase your emotional intelligence by learning how to manage or reduce negative emotions.

The meta-analysis also found that access to technology is linked to a decrease in self-control and well-being.

What are the five elements of emotional intelligence?

That was a lot of information, wasn’t it?

Thank you for reading this blog post. We’re so glad you made it to the end of this article. We hope it’s cleared up some misconceptions, and given you a deeper understanding of what EI is and why it matters.

If you have any more questions, please don’t hesitate to reach out to us.

247 Self Care Business Name Ideas to Make You Feel Good