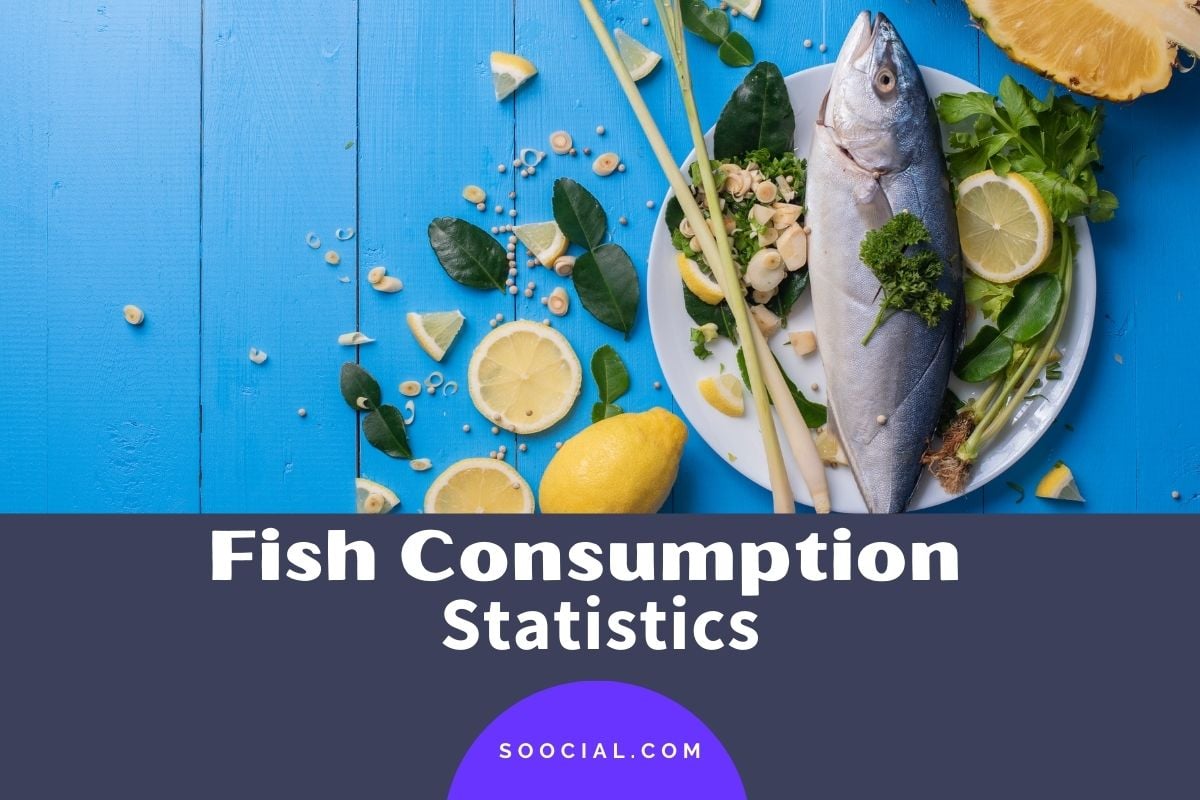 We love fish. We love eating it, we love catching it, and we love the calming effect it has on our brains. That’s right: Fish—that delicious, healthy protein source we’ve been told to eat our entire lives. But we also know that there are many people who don’t like to eat fish for reasons of conscience—and that’s cool.

We’ve gathered fascinating fish consumption statistics so you can make informed decisions about this important part of our ecosystem. We’ve got data on everything from how much fish people eat per year to what kinds of fish are most popular, so if you’re looking for some insight into the global seafood habits, this is where it’s at.

Buckle up, this is gonna be a wild ride!

Fish and Seafood Consumption in the United States

1. The United States is the second-largest seafood consumer, consuming a total of 6.3 billion pounds of seafood in 2019.

The United States is only surpassed by China when it comes to seafood consumption.

This shows a small increase from 19 pounds consumed in 2018. Although the average fish and shellfish consumption per person has increased over the years, it is still well below the recommended seafood intake prescribed by the US Department of Agriculture. According to them, every American should consume 26 pounds of fish and shellfish per year.

4. In 2019, the consumption of fresh and frozen seafood products in the US per capita was 15 pounds.

5. The consumption of canned fishery products in 2019 in the US was 3.9 pounds per capita.

The demand for seafood in the US is so high that the country has to import. As a result, it remains to be one of the major importers of seafood worldwide. In recent years, the percentage of imported seafood has only increased, while exports saw a slight decrease compared to 2018.

From 1961 to 2017, fish consumption worldwide has increased by 3.1% per year on average. This rate is nearly twice the average increase of the world population, which was 1.6% per year for the same period.

It is also higher than the increase in worldwide consumption of all other animal proteins, such as milk, dairy, and meat, which was 2.1% annually.

9. China has the highest consumption of fish worldwide, consuming 2.03 million tons of fish per year.

Every year, this amount of fish feeds one billion people. China’s demand for fish and seafood is so high that trawlers need to go to foreign waters to catch them.

In the country, whether you go to cheap or expensive restaurants, you will find fish on the menu. The country also produces so much fish that they are able to export to other countries, such as Canada.

Of the 179 million tons of fish produced globally in 2018, around 88% were consumed directly by humans. Only 12% was left for non-food purposes, which include using fish as bait, animal feeding, or as an addition to canned pet foods.

11. 35% of the global fish harvest is either wasted or lost.

This huge percentage of waste in the fish industry shows that the sector needs to improve its sustainability and efficiency. This can be done through implementing appropriate policies, capacity building, regulatory frameworks, and providing physical access to markets.

12.  Tuna is the most consumed fish in the world.

Tuna is the fish that is eaten most throughout the world, according to a report by the United Nations Food and Agriculture Organization. Tuna is high in protein and low in calories, making it a great food to include in your diet.

Now that you know this, why don’t you go grab a can of tuna and make yourself a nice tuna salad?

13. Iceland has the highest fish and seafood consumption per capita.

(Our World in Data)

Did you know that Icelanders eat more fish and seafood every year than anyone else?

In second place is Maldives, where people also eat a lot of fish but slightly less than Iceland. They have an average of 90.41 kg per year! Coming in third is Kiribati, with 76.69 kg per year on average.

According to a report by the Food and Agriculture Organization of the United Nations, fish consumption provided 17% of the animal protein intake of the global population in 2017. Additionally, it accounted for 7% of all proteins consumed worldwide.

That year, 3.3 billion people got their animal protein intake from fish meat. In some countries, such as Ghana, Cambodia, and Bangladesh, this percentage goes up to 50%. Small islands are more inclined to have a diet that consists mainly of fish because of easy access.

16. Tuna is the fish with the highest amount of protein.

The increase in fish consumption worldwide shows no signs of slowing down. As a result, global fishing companies are working twice as hard to meet the demand. Fish supply is expected to increase worldwide, except in Africa, where fish consumption per capita is projected to decline.

In addition to expecting that fish production will increase in the coming years, the percentage of fish for human consumption is expected to increase as well, reaching 89% by 2030.

With the production of fish and seafood increasing worldwide, the question of sustainability is top of mind. Although fish is a renewable resource, one can still wonder how long we can produce and consume fish without running out.

This is a relatively slower growth compared to the one seen from 2007 to 2018 when total fish production worldwide saw a 27% growth.

Historical data shows that in 2020, the seafood industry was valued at $240.6 billion globally. According to the latest statistics, the global market value of the industry reached $252.6 in 2021. It’s only expected to grow in the coming years, with an estimated value of $335.8 billion by 2025.

21. Africa is projected to have the highest growth in fish supply for human consumption by 2029.

Globally, the fish supply for human consumption is expected to reach 180 million tonnes by that year. However, there will be varying figures in growth from one continent to another, depending on how much the population grows and how much fish is consumed.

22. By 2029, Asia will account for 75% of the additional fish consumption worldwide.

Although Asia will not have the highest growth rate in the fish food supply, it will still account for 75% of the additional fish consumed by humans globally. This is because Asia is the largest consumer of fish worldwide.

Additionally, 40% of that additional volume of fish consumed will be attributed to China, where rising income, a growing population, and increased diversity in fish products contribute to rising consumption levels.

23. 58% of the total fish for human consumption will likely come from aquaculture by 2029.

Aquaculture is already a more significant source of fish for human consumption compared to the wild catch, contributing to 53% of the total volume from 2017 to 2019. However, in the coming years, particularly in 2029, that percentage is expected to increase to 58%.

This increase is driven by competitive product prices in the market, decreasing availability of fish in the wild, and urbanization.

How much fish is consumed each year?

Globally, the demand for fish has only been increasing. In the 1960s, the average person ate only 9.9 kilograms of fish each year. Nowadays, that yearly number has increased to about 20.5 kilograms per person. This increase can be attributed to rising income, population growth, and urbanization.

How much of the US population consumes fish?

According to a study published in 2014, more than four out of five Americans consumed seafood in a span of 30 days. In particular, 74% stated that they consumed fish, and 54% stated they ate shellfish. The demographics that consumed less seafood were the young, low income, and low education.

Which country consumes the most fish?

According to WorldAtlas, China has the highest fish consumption worldwide, with 2,035,262.17 tons of fish consumed by over one billion people. The country’s demand for fish and other seafood is high, so Chinese trawlers venture to foreign waters to catch them.

On the contrary, fish consumption in the world has been steadily increasing over the years. For example, in 1961, the per capita consumption of fish in Asia was only 1.86 kilograms. Fast forward to over 50 years later, and that number has reached 5.04 kilograms per person.

Why is fish consumption increasing?

We have come to the end of our list of fish consumption statistics. We hope you found the information useful, and you’ve learned something new! It’s been a fun ride, and you’re now ready to make your own fish-wise decisions.

Please reach out to us if you want to go over any of the information that we’ve collected or anything that follows from it. We’d be happy to help in any way possible! If you’re interested in seeing any of the stats we’ve covered in greater depth, please be sure to check out the links we’ve provided below.

Thank you for reading!

1221 Food Business Name Ideas That Nobody Can Resist