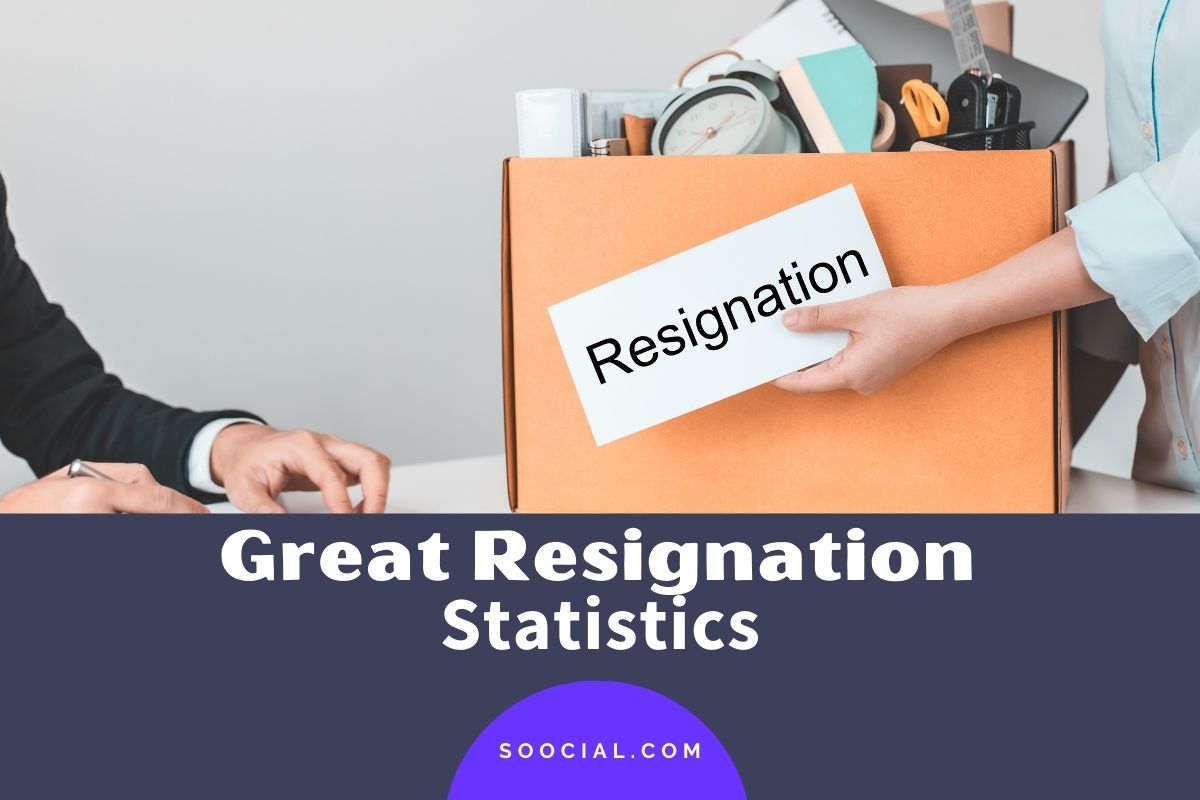 It seems that workers have had enough when it comes to unfair working conditions and low salaries. They are not afraid to quit their jobs and seek something better. This attitude is among the leading causes that drive the Great Resignation in the United States but also worldwide.

In order to make sure you’re on top of this critical issue, we’ve compiled a list of the most significant statistics related to The Great Resignation.

Here are our top picks regarding the Great Resignation stats and trends.

Do you think the stats we listed above are shocking? Wait until you read the statistics and facts we have below!

1. In the United States, a record-high number of quits were seen in November 2021.

The latest reports by the BLS show that in November 2021, there were a total of 6.27 million job separations. A record-breaking 4.52 million were quits. This figure shows the extremely high number of people who are voluntarily quitting their jobs.

In fact, according to the BLS figures, ever since July 2021, at least 4 million people have left their positions per month. Most quits were noted in the accommodation and food services, health care, social assistance, transportation, utilities, and warehousing.

Here are some figures to note regarding the monthly number of job quits in the United States:

However, the number of quits was low from April through May 2020 due to the COVID-19 pandemic. During those months, the number of job separations and, more precisely, layoffs and discharges skyrocketed instead.

2. The number of American job openings in March 2022 was at an all-time high.

The BLS reports an all-time high number of job openings for March 2022 of 11.54 million. Compared to the 11.34 million positions available the previous month, this figure has increased. In March 2021, moreover, there were much fewer jobs available, i.e., 8.48 million.

These figures reveal that in only a year – from March 2021 to March 2022 – the number of job openings in the US jumped by 36%. These figures are also in line with the Great Resignation trends. As more and more people leave their positions, more and more openings need to be filled.

It’s important to note that 10.5 million of the available jobs are in the private sector, while only 1.04 million are for the government. So, in the United States at least, it seems that private companies are the ones affected by the Great Resignation the most.

Among the 4.53 million Americans who left their jobs that month, 4.28 million or 94.48% were from the private sector. So, it’s definitely the private sector suffering the most from the effects of this latest trend of quitting jobs.

The BLS’s latest statistics reveal what industries have noted the highest number of resignations in March 2022.

As for industries where not that many quits were seen, here are some examples.

The latest BLS reports on resignations also offer insight into the number of quits by region.

In this segment, the South region leads the way with 1.92 million quits in March 2022. The West region comes next with 1.11 million resignations. Finally, the Midwest and the Northeast regions contribute the remaining quits. These two noted 894,000 and 599,000 quits, respectively.

This trend is in line with the figures from the previous months and years.

Even with the COVID-19 pandemic put aside, the number of resignations in the US has grown year over year. BLS data from April 2017 shows 3.03 million quits for the month. Represented in a line, the upcoming months reveal an upwards trend.

By November 2018, the number had surpassed 3.5 million already. The only exception was April 2020, when there were only 2.03 million quits as the pandemic shut down entire industries. Ever since, the number of quits has been skyrocketing, it seems, reaching the latest record-high figures of over 4 million resignations a month.

All of these resignations are, naturally, driving the number of jobs in the United States. In March 2022, this figure was also at a series high at 11.55 million. By comparison, in March 2021, there were 8.48 million available positions for American workers.

As for the latest 11.54 million jobs, most of them (10.5 million) were in the private sector. Only 1.04 million positions were available in the government sector. These figures, once again, highlight the headaches the Great Resignation causes to private businesses.

Another rate that has significantly changed over the past 12 months is the unemployment one. Namely, in April 2021, the unemployment rate in the United States was at 6%. By April 2022, it dropped to an impressive 3.6%.

This rate shows that even though many people leave their jobs, they don’t end up unemployed. Instead, the figures suggest that workers are just switching to positions with better offers.

The reputable Pew Research Center focused on the reasons why workers quit their jobs during the Great Resignation. They provided options as the “major” and “minor” reasons for handing in their resignations and a final “net” score for each.

Their data revealed that the top major reason (37%) for leaving their job was the low salary. For 26%, the low pay was a minor reason for quitting. Hence, the net score for this was 63%.

With an identical net score but different major-minor representation came in the “lack of opportunities for advancement.” Namely, for 33% of the respondents, this was a major reason to quit, while for 30%, it was a minor reason to resign.

Other major reasons for workers to voluntarily leave a job include feeling disrespected (35%), because of childcare issues (24%), not enough flexibility (24%), and lack of good benefits (23%). Workers also cited relocations (22%), working too much (20%), working too little (16%), and vaccine requirements (8%) as major resignation reasons.

9. Most of the workers who switched jobs tend to see improvement in their overall employment situation.

Over three-fourths of those who left jobs in 2021 and haven’t retired have found a new job already. Among those who quit, 55% were now full-time employed, and 23% were part-time employed. For nearly two-thirds (61%), finding new employment was somewhat easy, while for 33%, it was “very easy.”

Overall, those who switched jobs reported being in a better position than before. Among everyone who quit a job throughout 2021, 56% said they were making more money. Moreover, 53% have better advancement opportunities, and 53% said they could now more easily balance their work and family responsibilities. Half of those who resigned and got a new job had more flexibility, and 42% had better benefits.

With such reports, it’s expected to see the Great Resignation stay strong. As long as workers tend to find better jobs and working conditions, they will keep switching employers. Unless, of course, employers step up their game and start meeting the needs of their workforce.

10. Young adults are the Americans who are quitting their jobs the most during the Great Resignation.

Data by the Pew Research Center reveals the demographics of those who are the most likely to resign. Among women in the workforce, 20% left a job in 2021 compared to 18% of men.

Pew Research Center data also reveals that low-income workers are more likely to quit. Among those with a low, middle, and upper income, the share of workers who resigned in 2021 was 24%, 18%, and 11%, respectively.

11. Younger generations would prefer being unemployed to unhappy and employed.

A Randstad study asked workers from 34 countries whether they’d rather be unemployed than unhappily employed. The results show that younger generations value their happiness more, as 40% have responded positively.

Here are the results of what percentage responded with a “Yes” below:

12. Nearly a third of employees in the UK consider changing jobs in 2022.

While the concept of the Great Resignation started in the United States, that doesn’t mean that other markets are safe from it. In fact, in a survey focused on UK workers, 29% said they wanted to change jobs in 2022.

Depending on the sector, the share of people who would quit their jobs was much higher. For example, 44% of those employed in the legal industry and 42% of those in the IT sector said they would resign for a better offer.

13. More than 40% of workers worldwide considered leaving their jobs in 2021.

According to the data in the annual Work Trend Index report for 2021, over 40% of global employees were considering switching or simply leaving their jobs.

The survey also outlined the best ways for employers to keep their workers amid the Great Resignation. One of the essentials was offering flexible work, as that’s what 73% of the employees seek.

14. Over one-quarter of Australians have resigned because their jobs didn’t fit their lifestyle.

Randstad’s research focused on employees and their stance towards their jobs outlines an interesting trend in Australia. Namely, more than one quarter or 26% of Aussies have quit a job simply because it didn’t fit their personal life.

A different study discovered that 1 in 5 Australians changed jobs in 2021, while about 25% considered resigning.

15. 40% of Generation Z-ers expect to leave their current jobs within two years.

That’s a lot of people! And it’s no wonder. The workplace has become more and more demanding over time, with employees having less and less time for themselves—and each other.

This is a significantly higher percentage than Millennials (24%) who say they would do so.

Of course, this statistic is not surprising—it’s no secret that Gen Zers are looking for a higher purpose in their careers and want to make an impact on the world.

To understand why we need to take a look at how this generation has been shaped by changes in technology over the last decade. Since coming of age in an era when smartphones were ubiquitous and social media platforms were growing rapidly, Generation Z has been accustomed to instant gratification. This means that if something isn’t working for them immediately (or even within a week), they will likely move on to something else—and there are plenty of other options out there for them.

But what does this mean for employers?

It’s up to you to find ways to help your employees achieve their goals and feel valued. If a company doesn’t offer flexible work hours or provide opportunities for growth, it’s likely that many of your employees will be looking for other options.

Let’s wrap it up!

There are a lot of interesting statistics here, and I hope you’ve taken the time to think about how they might apply to your career.

We hope you enjoyed this journey through the data with us! If there’s anything else you’d like to know about The Great Resignation, or if you want to share some of your own thoughts, please feel free to reach out to us!

Until next time, take care and all the best!

26 Why Employees Quit Statistics That You Should Know (2022)