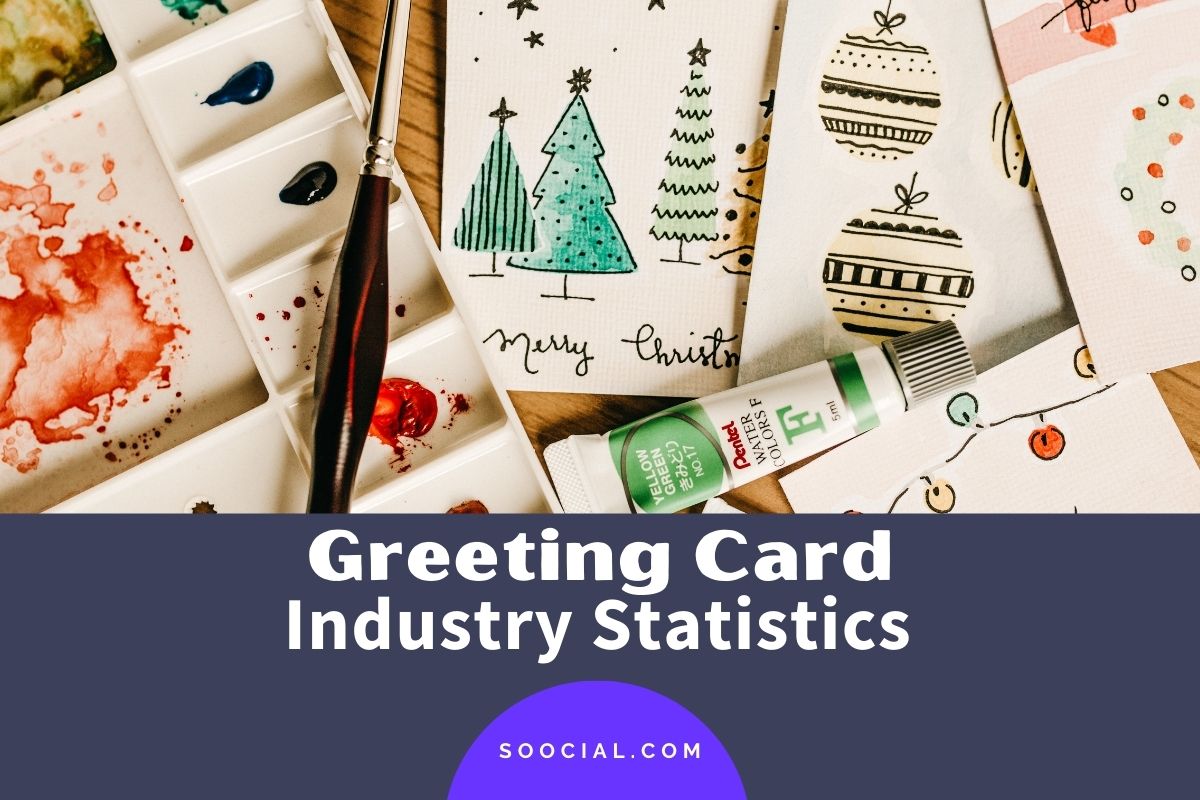 If you’re in the greeting card industry, then you’re probably always looking for ways to improve your business.

You know how important it is to stay on top of industry trends. But sometimes it can be hard to find information about what’s going on in your industry—especially if you don’t want to pay for expensive subscriptions or pay someone else to do research for you.

Well, we’ve got good news! We’ve collected the latest statistics about the greeting card industry in one place so that you can find everything from the total number of greeting cards sent each year to how much money people spend on greeting cards (and much more).

Everyone likes a good old greeting card, right? Well, maybe not in 2022, when the focus has shifted to digital goods and being environmentally conscious. What does that mean for the greeting card industry? Well, we handpicked some awesome statistics below!

Needless to say, there’s a lot more to uncover when it comes to the magical and festive greeting card industry. So, scroll down to discover all the statistics and trends we’ve listed for you.

According to the 2020 reports from PR Newswire, the global greeting card industry was worth $23 billion. However, this market is forecasted to drop to $20.9 billion by 2026.

In this report, there are various segments of the industry covered. So, the birthday greeting card industry should drop to $6.1 billion by 2026.

As for national markets, the US greeting card market was estimated at $7.3 billion, whereas the China one was $1.1 billion.

According to the latest data by the Greeting Card Association, American consumers purchase about 6.5 billion greeting cards every year. The yearly retail sales of this product typically vary between $7 billion and $8 billion.

This isn’t all that surprising, considering that 90% of American households buy greeting cards every year.

3. The UK has the largest percentage of adults that purchase greeting cards, while New Zealand is at the bottom.

A survey conducted in 2019 and 2020 reported that over 76% of adults in the United Kingdom had purchased at least one greeting card. The next spot on the list is occupied by the United States, where about 53% of adults buy greeting cards.

Canada is just below the US, as it reported that 50% of its population shop for greeting cards.

Lastly, New Zealand made the list with 41% of adult Kiwis saying they purchase gift cards regularly.

4. Christmas is by far the most popular occasion for purchasing greeting cards.

Experts are categorizing greeting cards into every day and seasonal. When it comes to everyday ones, the most popular categories are:

As for the seasonal ones, Christmas is leading the way by far when it comes to units sold. Greeting card industry statistics by the Greeting Card Association show that 1.3 billion Christmas greeting cards are sold every year.

These are followed by Valentine’s Day (145 million), Mother’s Day (113 million), and Father’s Day (72 million). It’s amusing to note that 85% of adults in the US celebrate Mother’s Day, hence it’s landing third place by unit sales. Plus, Mother’s Day is the largest holiday for card-sending in the Hispanic community.

It’s interesting to mention that the number of Galentine’s Day greeting cards has been on the rise alongside the celebration’s popularity. Namely, this new trend promotes celebrating your female friends – gals on the day before Valentine’s Day.

Greeting card industry reports from 2020 show a worrisome trend when it comes to publishers’ revenue.

6. Greeting cards can cost anything between 50 cents and $10 or even more.

So, there are handmade or recycled cards alongside products that come with lights and even sound chips. That’s why the price of greeting cards drastically varies. The cheapest ones start at 50 cents, while the most expensive ones can cost $10 or more. Still, the average moves from $2 to $5.

7. Most people buy and send greeting cards to make someone feel good.

Three-fourths of those who buy and send greeting cards over the holidays do so to make their loved ones feel good.

As for how they choose which cards to buy, there seem to be five individual decision factors:

Moreover, consumers have said that they prefer an actual greeting card compared to a social media message or a text message. However, thanks to social media, birthdays are more recognized than ever.

In that sense, social media has been driving the sales of birthday greeting cards.

It’s interesting to note that technology savvy and younger consumers are the ones who purchase greeting cards over the Internet.

9. The UK greeting card market’s value has been dropping since 2018.

The lowest figure was reported for the year 2020, as it was just below $1.4 billion.

When it comes to who the most valuable customers are, you’d be surprised to discover that it’s the Millennials. Customers from this generation tend to purchase the greeting cards that cost the most, and they buy greeting cards at a higher rate compared to Gen Xers.

In regard to units bought, Baby Boomers led the way. Yet, Millennials have been the generation spending the most money on this product ever since 2015.

Greeting card industry statistics on consumers have shown, however, that the average purchases are from 35 to 60 years old as that’s the age range when people know the most people. So, it’s likely that they have lots of events to purchase greeting cards for, such as birthdays, weddings, baby showers, and so on.

11. Women buy most of the greeting cards that get sold.

The men versus women talks are always relevant, and for this aspect, female customers are the target audience. Namely, over 80% of all greeting card units are bought by women. Moreover, female purchases have a higher likelihood of buying several greeting cards at once.

12. In the UK, most greeting cards are bought by elderly women.

While 79% of UK greeting card shoppers are female, their age group is also important to note.

13. Almost 80% of the UK’s greeting cards are bought in North England.

The same survey also analyzed what parts of the UK bought the most greeting cards.

The results put North England at the number one spot, with 79%. The Midlands and South England are just below it with 78%, while Wales reported 76%.

Scotland and North Ireland reported that 75% of their population purchased greeting cards, while London is at the bottom with only 69%.

Even though this is a strong figure, the industry for greeting cards and other publishing has been decreasing year over year.

From there on out, the wages have been declining steadily:

The United States reported that there are 568 greeting cards & other publishing businesses operating in 2022. While this number might seem big, there’s actually a decline of an average of 2.4% over the last five years.

Moreover, California, Florida, and New York are the top three states with the most greeting card & other publishing businesses in the US. More specifically, California has 98 opened businesses, while Florida and New York have 60 and 55, respectively.

17. The greeting cards and other publishing industry in the US employs over 19,000 people.

In 2022, the US reported there are 19,335 employees in the greeting cards industry. From this, we can conclude that the average greeting cards business employs around 33 people.

Now, the total number of employees is a 1.9% decline compared to the 2021 report. Similarly, the industry reported an average decline of 6.3% for the past five years.

Greeting cards are an inevitable part of every holiday season. A survey that took place from October 1st to the 10th showed that the average consumer spends around $29 on greeting cards. Of course, this includes the postage costs as well.

19. The average US customer spends around $7 on greeting cards for Valentine’s Day.

History has proven that customers will spend more on gift cards during holidays, especially when it comes to romantic occasions.

Thus, the 2022 report for Valentine’s Day includes consumers paying seven and a half US dollars for greeting cards. This statistic resulted from a survey that included over 7,700 US citizens over the age of 18.

20. 36% of American consumers believe that giving greeting cards is one of the most underrated thoughtful gestures.

There’s nothing like a carefully-crafted greeting card to show your loved ones that you care. A greeting card is original and personal, easy to share with anyone, and loaded with emotion.

Greeting cards are still a very important and meaningful gesture to millions of Americans. They have been used as an expression of love, happiness, and sympathy for decades, which is why they still hold significance today as evident in this survey.

21. Research shows the average American saves 17 greeting cards over the course of their lives.

While this is a small number, it’s important to note that in many cases, these cards are not just kept as mementos of someone’s life or even of special occasions. The vast majority of greeting cards are saved for sentimental purposes.

The sentimental value of greeting cards can be linked to several factors.

22. 68% of people feel that receiving a greeting card indicates the person who sent them cares about them.

68% of consumers believe a greeting card shows someone cares about the person who receives it, making it the top reason people like receiving greeting cards.

23. 61% of Americans store their cards for over six months after receipt, regardless of the occasion.

For many people, greeting cards are a way to express appreciation for someone else. But for some, they are more than just a way to show someone you care—they’re an opportunity to make a memory.

Research shows that these people want to remember the person who sent them the card, and they want to keep the card as a reminder of their relationship with that person.

It’s not uncommon for people to keep cards from their children or grandchildren in their wallets or purses for years after receiving them.

This is an incredible statistic because it shows that the value of a greeting card is lasting. Even though it’s a small token, it can have just as lasting an impact as something more elaborate.

There’s no question the digital age has made sending cards somewhat antiquated. But that doesn’t mean the greeting card industry is dead – far from it.

The rise of social media has also given birth to a new wave of greeting cards—digital cards—and they are extremely popular with millennials.

So if you want to get in on this lucrative industry, now is the time!

25 Business Card Statistics to Make You Do a Double-Take