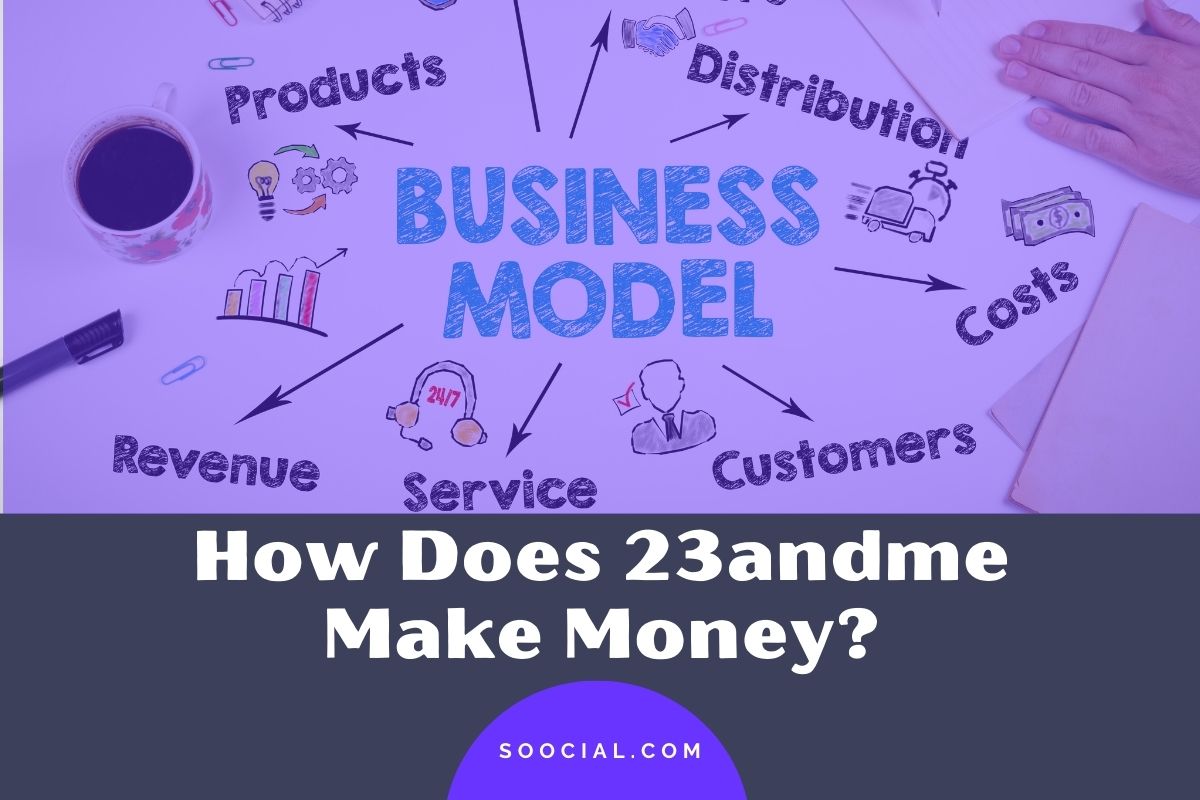 Today, 23andme has expanded to cover more than 1000 regions and offers consumers a chance to explore their ancestry just as they might explore unknown lands on a vacation. If you’re not familiar with 23andme, it is a personal genomics and biotechnology company based in California, highly popular for its direct-to-consumer genetic testing service that will reveal consumer’s ancestry and genetic makeup.  They also have a service that allows you to receive health-related information based on the tests they’ve run on you.

But how does 23andme make money? What are they selling exactly? That’s what we aim to answer in this article. We’ll discuss their business model in detail and find out what kind of revenue sources does it have.

23andme operates on data selling business model in that they have a database they license out to drug companies for R&D. The primary source of their database is their DTC genetic testing kit, with supplementary data supplied by surveys and various smartphone apps.

Let’s delve into the company’s business model and find out more.

23andme is a genetic testing company that prides itself on being the first FDA-approved direct-to-consumer DNA and health test. The company was founded in 2006 with the mission of helping people learn more about their ancestry and family medical history.

23andme is a DTC genetic testing service that creates a database from its users. This database can be monetized for the therapeutics market and many other applications.

What sets 23andme apart from its competitors are four things:

23andme has an evolving business model. It was originally in the DTC genetic testing business when it was founded in 2007. However, after 23andme ran into legal and regulatory problems with the FDA, it had to begin to change its business model.

Due to its home testing service, 23andme is in possession of a very large database. The current monetization of that database is primarily therapeutics, but that can change in the future.

Based on this history, 23andme’s business model is that of a drugs and data business that uses DTC genetic testing, health-related surveys, and a health app to continue to build its database.

Its database is so large and comprehensive that it has a competitive edge in the drug business.

How Does 23andme Make Money?

23andme has diversified revenue streams for making money. Even though DNA home testing/DTC genetic testing has been their primary revenue stream over the years, that will most likely soon be replaced by therapeutics.

What has previously cost $999, 23andme has managed to get down to $99. Home DNA testing, aka direct-to-consumer (DTC) genetic testing, allows users to spit a sample of their DNA and submit that sample to laboratories for analysis.

The application of this testing can be divided into two categories: ancestry and health-related.

23andme’s strongest competitor in this market would be the company, Ancestry, aka Ancestry.com.

Health-related testing deals with discovering genetic predispositions to certain health issues, such as a cancer gene. The FDA considers such test kits to be a form of drug and, therefore, subject to all of the regulations for any drug sold within the US.

In consequence, 23andme has had some legal battles regarding health-related home DNA testing. 23andme has been able to market its full genetic testing services without FDA approval within Canada and the UK.

A compromise has been reached in that the FDA has granted 23andme the right to sell some health-related home DNA tests:

CEO Anne Wojcicki when speaking at Talks at Google has stated that 23andme boasts the largest human genetics database in the world. Many have proclaimed 23andme the Google of human genetics.

While there may be some justifiable concerns regarding the data mining of the human genome, Wojcicki has promised that 23andme would not sell user data to third parties without the user’s consent.

There is an online terms-of-service form that the user must sign before any DNA sample can be analyzed by 23andme, which gives 23andme the right to the user’s data in many aspects.

Wojcicki also claims that 80% of users willingly consent to have 23andme use their data for altruistic reasons; they want to help cure or prevent cancer and other diseases.

There is also an anonymous option, where the user grants 23andme the right to use their data, in aggregate, for research purposes, but not identify the user by name to third parties when discussing personal data.

Regardless of whether Wojcicki plans to sell personal data, the database of user data in aggregate should be quite easy to monetize. Therapeutics is the most obvious application of this database but there are many others: statistical research, food industry, sports industry, etc.

Therapeutics currently appears to have the most growth potential for 23andme. That also seems to be the opinion of Richard Branson when he decided to have Virgin do a $3.5 billion SPAC merger with 23andme.

Therapeutics is where 23andme is doing the majority of their hiring. In fact, 23andme has more postings for therapeutics than all other departments combined.

GlaxoSmithKline (GSK) has signed a deal that will allow 23andme to receive 50% of any profits drug developed from their data. The companies are in a joint partnership regarding clinical trials and the development of drugs created by GSK for cancer treatment.

In early 2020, Almirall SA purchased the right to market the first in-house drug developed by 23andme, “a bispecific monoclonal antibody that blocks all three isoforms of IL-36 cytokine”.

The drug will be used for the treatment and/or prevention of various inflammatory diseases and dermatological conditions.

In addition to data collected from the testing itself, 23andme collects 30,000 health-related surveys from users. These surveys have a market value in themselves in that they are an additional data source.

Users can participate in the research from their phones and laptops at any time they wish, for five minutes or fifty minutes. This research contributes to over 230 studies.

Topics range from “Parkinson’s disease to lupus to asthma and more” and has already resulted in the publication of 172 research papers in collaboration with some of the most prestigious universities, including but not limited to:

In 2020, 23andme launched a health app with 75,000 subscribers. In addition to the revenue stream created by this app, this app is obviously also a data source.

For those who do not own Apple products, Google Fit is an option, which also integrates with 23andme.

Google Fit has worked together with the World Health Organization to develop Heart Points, a feature that allows the user to track and reach an activity goal that is based on the WHO’s recommendations.

23andme’s funding has increased 8x over the course of eight years.

With backers like Richard Branson and endorsements from Warren Buffet, they should have no problem attracting funding in the future, should they need it.

Revenues, however, are another story. Revenues have nearly cut in half over the course of two years.

23andme is not making a profit at this time. Demand for home DNA testing has been falling and revenues have been decreasing. In January of 2020, 23andme had to lay off 15% of its workforce.

It should be noted, however, that the drug created by 23andme in partnership with Almirall SA is relatively new to the market.

Due to the steady decrease in profitability in the DTC genetic testing industry across the board, it can be deduced that the loss in revenues was related to 23andme’s old business model for home DNA testing and not a reflection of its soon-to-be presence in the therapeutics market.

Furthermore, 23andme has only recently become a public company on June 17, 2021. (It merged with VG Acquisition Corp., a SPAC owned by Richard Branson, and has been renamed 23andMe Holding Co., trading on the Nasdaq under the ticker symbol “ME”).

Therefore, it has not yet had a full fiscal year as a publicly-traded company so those revenues are not yet in. Shares rose 21% on the first day of its listing.

Conclusion: How Does 23andme Make Money?

To sum us, 23andMe earns most of its revenue by selling at-home DNA testing kits and selling consumer genetic databases to various healthcare organizations for R&D purposes.

23andme provides an at-home saliva-based personal genome service for users to analyze their genetics and learn about their ancestry and inherited traits. They also offer genetic testing for health risks related to their genetics.

Apart from those services, 23andme offers genotyping services for pharmaceutical companies who want to use the data that they’ve compiled for research, and they also facilitate the storage of DNA data in a trusted manner and allow customers to download their raw data from the server for further analysis or processing.

We hope you found this article informational and that you now have a better understanding of how 23andme makes money. This company is pretty unique in the way its business model works, and it’s important to understand how it fits into the overall picture of genetics and healthcare.

Thanks for reading this article. If you’ve found it helpful, please take a moment to share it with others on social media. It helps us grow our reader base.

If you have any questions or suggestions, feel free to shoot us an email.

Have a great day!

How Does Noom Make Money? Business Model of Noom