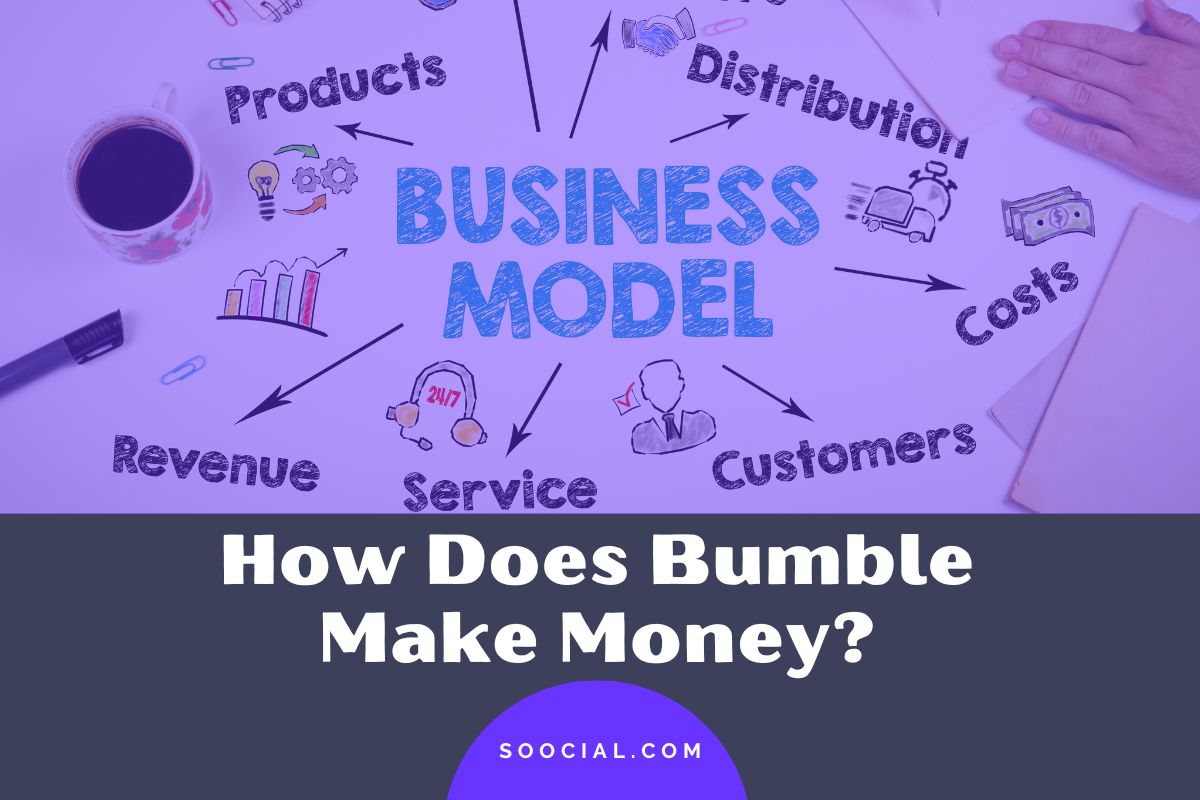 Bumble is a popular dating website and app. In recent years, the platform has also launched services for friendships and professional networking.

The company was founded by entrepreneur Whitney Wolfe Herd in 2014 after she left Tinder, a rival online dating platform. Like other dating platforms, users on Bumble view each other’s profiles and swipe if they’re interested in being matched. However, Bumble requires that women make the first move.

The popularity of dating apps has been steadily increasing worldwide since 2016. In that time, dating apps have seen significant growth in both user base and revenue share. In 2021, there were 323 million users of dating platforms worldwide. [1] Bumble is the third most popular dating app globally after Tinder and Badoo.

The app boasts 45 million active monthly users but only 1.5 million are paying users. Despite significant growth, Bumble has struggled after its 2021 IPO. In August 2022, Bumble was valued at just $5.4 billion. That’s a 50% decrease from its peak valuation of $13 billon in 2021.[2]

While the company has often met their predicted revenue growth, many on Wall Street seem to have lost faith in the stock.

What is Bumble & How Does It Work?

Bumble is like other dating apps like Tinder, Hinge, Match, and Ok Cupid. Users join for the purposes of finding other people for friendship, dating, and possible long-term commitment.

However, unlike other dating platforms, Bumble was designed to allow women to control the conversation by making the first move in heterosexual matches. Either can message first in a same-gender match.

Founder Whitney Wolfe Herd has referred to this structure as flipping the outdated gender dynamics of dating and romance, “on [their] head.” The platform has also been referred to as ‘Feminist Tinder’ and ‘Tinder for women; due to this focus on women’s experience of the platform. [3]

With Bumble, users create profiles that communicate who they are and what they’re looking for from a potential love or friendship match. The app is essentially a search tool that uses algorithms to match users based on the personal data they provide, like location and age.

After signing up, users can browse the profiles of other users, swiping right on profiles they like and swiping left on profiles they don’t. If both parties swipe right, a match has been made. At this point with other dating apps, either party can send a message.

Bumble is different in that the woman must message first within 24 hours in a potential heterosexual match. The man then has 24 hours to respond to her. If neither party responds with the 24-hour window, the connection will be lost. If both parties respond, the time restriction is lifted, and the conversation can continue at its own pace.

The time limit is novel among similar dating apps and is likely designed to increase user’s engagement with the site. It also likely means users generate connections faster which could make the app feel more effective to users.

Bumble is meant to provide a safer space for women by reducing the opportunity for men to send unsolicited lewd messages and pictures. In LGBTQ matches, either party can message first, and the other has 24 hours to reply. Users can also SuperSwipe to alert users of their interest.

Despite Bumble’s branding as a female-friendly platform, it has faced criticism in the past. Main investor and majority owner Andrey Andreev has been accused of misogyny and creating a toxic workplace.[4] However, Andreev sold his stake in the company in 2019.

Users who want to more easily search for potential matches can sign-up for Bumble Premium. It gives users access features like incognito mode, travel mode, advanced filters, and unlimited swipes. Bumble also offers something called Boost, which allows users to SuperSwipe, extend time on current matches, and spotlight their profile to the top of the profile stack.

In recent years, Bumble has branched out to matching people for other purposes. For example, it has added a BFF mode which is meant for users looking for friendship. It has also added a Bumble Bizz mode which attempts to rival LinkedIn as a business networking platform.

As a dating platform, Bumble is based on a freemium business model. The company makes using the app free in order to incentivize a critical mass of people to use the app. That ensures that people who sign up will be able to access a large number of potential partners, making their dating app experience better.

Users can then upgrade to paid plans that offer significantly more functionalities and features. The limited features of Bumble’s free plan means that users are incentivized to purchase premium services that enhance their experience of the app.

With 42% of dating app users aiming for marriage as an end goal, [5] the ability to pay to extend time with current matches or have an unlimited number of swipes on potential matches makes many users pay. Bumble has 1.5 million paying customers.

Bumble earns most of its revenue through its subscription offerings and in-app purchases like Bumble Premium and Bumble Boost. Users can also pay for individual services, like Spotlights. These are available individually or in packs of 30 and boost users’ profiles to more users for a period of 30 minutes.

Although Bumble’s model of allowing women in potential heterosexual matches to make the first move is unique, it’s freemium model of allowing free account creation while urging in-app upgrades is similar to other dating apps on the market. Bumble’s Spotlight feature, for example, functions like Tinder’s Boost feature.

Bumble also owns the popular Russian-based Badoo dating app, which allows it greater access to global markets. Badoo is focused on the European and Latin American markets, boasting over 28 million monthly active users. [6] Bumble operates in North America, the UK, the Czech Republic, and other countries around the world. The US market makes up more than 10% of the company’s revenue.

Bumble holds 22% of the U.S. market share. That means it comes in after Tinder which hold 32% of the market. Both beat out Hinge and Plenty of Fish, at 15% and 14%, respectively. [7] The company faces intense competition from these sites and other local or interest-specific rivals life FarmersOnly.com.

The company also faces competition over its friend and business matchmaking services. Companies like Friender and Friendmatch offer rival services and companies like Pawdates offer specialized friend matching services for dog owners. When it comes to making business connections, LinkedIn is a rival.

These additional matching services makes Bumble different from its other dating app competitors who don’t offer matching for these groups.

Bumble’s business model has been successful at generating increasing revenue. The company reported revenue of $765 million in 2021, up from $542.1 million in 2020.[8] But the company also has significant expenses. It takes significant human resources like developers, writers, editors, designers, and marketers to keep a global app like Bumble functioning smoothly.

Dating app companies also have to invest a significant amount of money in advertising to compete in the crowded online dating marketplace. After expenses, Bumble generated just $286.9 million in net income in 2021.[9]

How Does Bumble Make Money?

Bumble does not break down the sources of its revenue so it’s unclear how much of it comes from the company’s separate income streams.

Bumble Premium costs $19.99 for one week, $39.99 for one month, $76.99 for three months, and $229.99 for a lifetime subscription.[10] Many features extended by the Premium plan help with selling a monthly or weekly subscription if a user makes a mistake on the app or wants to reconnect with a match.

For example, a user might purchase a subscription if a match expires or if they accidentally swipe the wrong way on a promising match.

The Bumble Boost plan Is a lower tier subscription plan that costs less but doesn’t come with as many features.

It can be purchased independently for $5.99 each or $50.10 for 30 which costs just $1.67 each. This can greatly increase the number of matches a person gets in a particular period of time since their profile is given priority to people swiping.

SuperSwipes are features that allows users to indicate to matches that they’re very interested in them. When users activate it, the other user will be notified that you SuperSwiped them.

SuperSwipes are purchased with digital currency known as Bumble Coins. One SuperSwipe is equivalent to one coin. The cost depends on currency and region, but an American user can buy 5 coins for $7.99 or 30 coins for $34.99.[13]

Bumble also has a Bumble Shop. People who have developed successful love matches on the app can create a branded gift registry on the site. They can request items like a $75 charcuterie board and knife set engraved with the phrase ‘The best is yet to bee,’ a set of wooden honey dippers, and a variety of bee and honeycomb-themed wedding party favors.

No information was available on how much revenue the shop brings in for the company.

Bumble Inc. (BMBL) is currently a public company trading on the NASDAQ exchange. The company raised $2.15 billion in their February 2021 IPO with an initial opening price of $76 per share. This was well above its projected IPO price of $43 and gave the company a valuation of $8.6 billion.[14] As of August 2022, the company’s stock traded at $26.69 USD for a valuation of $5.4 billion.

Bumble is currently profitable. Although the company reported a net loss of $110.9 million in 2020, Bumble managed to post a profit of $286.9 million in 2021. Bumble has enjoyed periods of profitability since its founding but recently saw a $110.1 million loss in 2020.

The company’s focus on empowering the female dating app consumer may prove to be a risk. The company wants to grow by expanding the services it offers to that community but has not yet proven the profitability of its alternative Bumble BFF or Bumble Bizz models.

Because there is a low cost to consumers to switch to alternative dating apps, Bumble will remain at risk from its competitors. If Bumble were to seek alternate monetization strategies, it may be able to report more consistent profits and growth. [17]

So there you have it! Bumble’s business model is a clear example of how a company can use their product to their advantage. It’s not just about making money; it’s about delivering on the needs of their customers and finding new ways to do so.

As a result, Bumble has grown into a massive community with over 45 million monthly users, who are all looking for connections, friends, and of course, love.

It’s clear that Bumble is a force to be reckoned with in the dating app industry. The company has built a strong brand and a loyal user base, and it’s poised to continue growing as it expands its services.

We’re excited to see how the company continues to grow and evolve in the future. We’re sure there are plenty of exciting things on the horizon for Bumble!