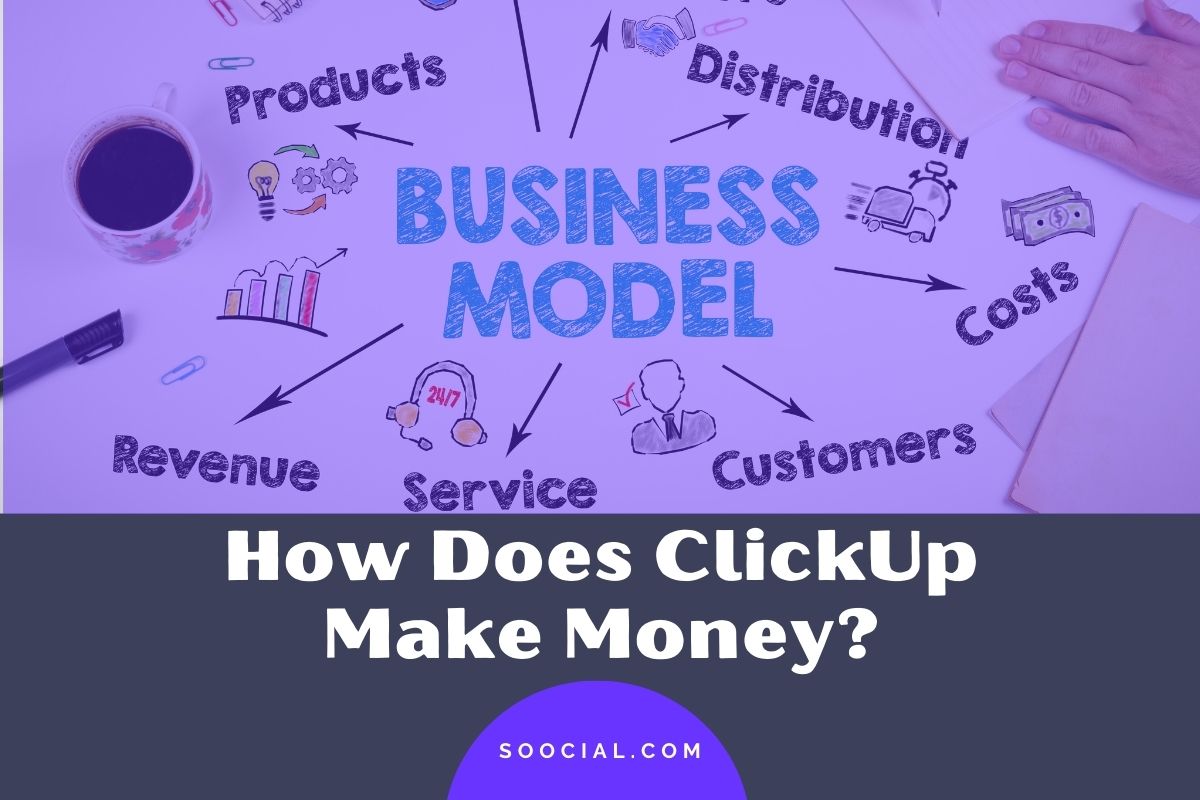 Founded in 2017, ClickUp is a cloud-based task and project management tool. It is an all-in-one productivity platform that keeps all of your work organized in one place, designed to be a one-stop-shop of task management apps. It offers users more than a hundred features, including to-do lists, calendars, live messaging, task hierarchy, and a lot of customization options.

While ClickUp has experienced phenomenal growth, it still remains an enigma to most aspiring entrepreneurs. Many are wondering how ClickUp makes money.

ClickUp operates on a freemium SaaS business model, which means that the project management tool is free of charge. ClickUp makes money by charging for premium subscriptions to users who want additional features or more storage space.

Are you curious to know more about ClickUp’s business model and how it generates revenue? If so, you are in the right place. This article will help you dig into their revenue model and explain how ClickUp makes money.

ClickUp is a company that condenses the thousands of productivity apps that help us work into one large platform.

Self-described as “one app to replace them all”, ClickUp is helping to make people more productive by simplifying their workspace. In doing so, this one-stop shop has quickly become one of the fastest-growing productivity platforms across the globe.

The great thing about ClickUp is that it’s designed for everyone, and anyone can use it.

ClickUp boasts large companies like Tesla and NBC are able to make use of their platform. They are also proud of the smaller teams, like families making use of the app by delegating chores or setting reminders.

With a mission to help “save people time by making the world more productive”, ClickUp quickly created a name for themselves.

Founder and CEO Zeb Evans learned the importance of working smarter, not harder very early on. Driven by his own frustrations in navigating between multiple productivity apps, Evans became hungry for a way to save time.

ClickUp is a company that most certainly believes in what they do. The platform was originally created for internal use for a different project that Evans was involved with.

Recognizing how useful the application had quickly become, he made the decision to share it with the world.

Though ClickUp was founded just three years ago, it has quickly become a force to be reckoned with. In an uneven playing field where competitors have been in the industry for 10+ years, ClickUp still measures up.

Moreover, the company offers a number of product features that competing platforms do not provide:

Set, manage and perform custom tasks with ClickUp’s Task feature. Users can check the task status, correspond by leaving real-time comments, and share with outside parties.

With this feature, customers can also expand large projects into subtasks to meet goals more easily.

With ClickUp, users can create folders that can be seen by anyone they share within Docs.

For example, an employer can create and assign tasks to employees for completion. The ability to create these separate folders allows for a less chaotic workspace, and greater organization, driving productivity up.

ClickUp helps users stay on schedule in order to meet important deadlines. The platform even provides employers with a way to monitor their employees’ progress with weekly scorecards.

One of the bigger draws to joining ClickUp is the wide number of integrations added to the platform.

Productivity applications such as Zoom, OneDrive, Dropbox, Grammarly, and more are available for use for user convenience. The company has created a way to maximize our workspace while minimizing the mess.

ClickUp makes sure that users can find the most popular productivity applications on their platform. If not, they can also create their own personalized integration using ClickUp’s public API.

By partnering with a number of prominent companies, ClickUp has made working a more enjoyable experience.

Users can access ClickUp anytime, anywhere as the platform is available on all desktop browsers, and as a mobile application. Customers also have the option to use their voice command feature to set reminders, create tasks and view notifications.

Moreover, ClickUp provides an email add-on feature that syncs with your personal email for an even more streamlined workflow.

Users can transfer all of their existing projects into one space with the company’s Import feature. Customers can even import users and assign them to a task.

Users can access companies such as Asana, Monday and Todoist, and more to import your tasks for a more streamlined experience.

ClickUp delivers a wide variety of valuable tools and resources on its platform. In order to understand all that the company has to offer, they also provide a learning center for customers.

For visual learners, ClickUp provides tutorials on various topics like onboarding or customization. They even break down their on-demand demos based on experience level. The company also offers webinars for more specific cases, or users can suggest a topic that they’d like to see.

ClickUp provides detailed help articles for users to read through. Users can feel confident in their journey as they follow how-to guides with helpful pictures to support the text. In addition, the company blog delivers useful content pertaining to the industry, how to navigate it, and more.

Recognizing that not everyone is well-versed in project management software, ClickUp takes initiative to educate its users.

The company provides weekly tips to keep their customers in the know. ClickUp is heavily invested in education, and the lengths that they’ve gone to teach their users make this evident.

Customer service is of utmost importance at ClickUp.

Evans admits to having interned for six months at The Walt Disney Company. There he learned why customers consider Disneyland “the happiest place on Earth”, and brought those principles to ClickUp.

The company boasts of having the highest-rated client support in the industry. They provide free one-on-one coaching for customers eager to maximize the use of the platform. They are also available to support their customers with 24-hour assistance, including holidays.

How Does ClickUp Make Money?

Evans advises that good company culture is important for increasing productivity, which in turn generates revenue.

The company places a great deal of importance on its hiring practices. He suggests that if the work-life balance is important to an interviewee, ClickUp isn’t the place for them.

He is transparent regarding his intent to succeed. And his vision for the company is what helps ClickUp become the success that it is today.

And while a great work culture and motivated employees certainly help, ClickUp makes money from their paid subscription plans.

In today’s competitive software marketplace, the race to the cloud is being won by companies that offer a freemium model, where new users get a basic product, but then have to pay for additional features.

ClickUp generates revenue from their paid subscription plans. For a monthly fee, users can have access to a plethora of tools and resources that help drive profitability.

Companies and organizations on the ClickUp platform pay a monthly subscription fee to access additional features and functionality on the platform. These paid accounts can be billed annually or on a monthly basis.

In offering multi-level subscription plans, the company has generated revenue from over 50,000 teams and counting.

With this plan, users receive the basic essentials to help get them started for no monthly fee.

The features included in this plan are up to 100MB of storage, unlimited tasks, unlimited members, and two-factor authentication. This plan is beneficial to those who want to test the waters, without making too much of a commitment.

Though the free plan does offer valuable tools and resources, users are limited in some key areas.

Access to important integrations like Google Drive and Dropbox are not available with the free plan. And over time, many users will find that they require more storage space. Here is where the money comes in.

Many ClickUp users subscribed to the free subscription plan eventually move on to the paid ones. For $5 per member monthly, users have access to all that is included in the free plan and much more.

Included in this plan are unlimited storage, integrations, dashboards, guests and permissions, goals, portfolios and custom fields, and more.

For $9 per member, users can upgrade to their business plan to receive everything found in the unlimited plan and more. Some features include permission settings, branding and

customization, access to historical data, Google single sign-on, and much more. This plan is for businesses that are looking to maximize efficiencies in their day-to-day operations.

ClickUp offers their Enterprise plan touted as being for advanced users, or those working with a large team. This plan allows Admins to manage the degree of complexity and features end-users can access. It also decreases information silos, helping to increase ways in which users communicate and collaborate with their team.

Though each of the subscription plans is priced at an affordable rate, ClickUp goes the extra mile. Their Let’s Make a Deal feature allows users to negotiate the price per member, allowing users to save even more money. This feature not only helps them win over potential customers but also builds a relationship of trust and credibility.

In 2020, the company raised a total of $35 million in their series A funding round led by Craft Ventures. Less than a year later, ClickUp doubled its user count to two million, increasing its revenue more than nine times.

In just two years since its inception, ClickUp raised $100 million in their series B funding round led by Georgian. Because of this, they reached a $1 billion valuation, earning them the coveted unicorn status. This is a highly sought-after title defined as a privately owned start-up earning $1 billion in company valuation.

Since 2017, the company has raised a total of over $137 million in capital over four rounds. This is an impressive feat in a highly competitive industry that is quickly becoming the largest in the software space.

ClickUp, the company that’s reinventing project management is profitable and is continuing to grow at an accelerated rate. It is now expanding globally and increasing its customer base to improve market share with an ambitious growth plan.

Though a fairly new player in the game, ClickUp is already turning heads in the industry. With companies like Forbes calling the platform an “essential tool for workplace hybridity”, it’s no wonder their success happened overnight. Early investment in the company is evidence that ClickUp could become the leading productivity platform in the near future.

Conclusion: How Does ClickUp Make Money?

To wrap it up, ClickUp makes money via paid subscriptions. ClickUp works on a freemium business model, which means the basic functionalities are free to use, and users only pay if they want to upgrade the tool to use advanced features.

ClickUp is growing in popularity among freelancers, startups, and small businesses due to its highly affordable pricing. It has shown massive growth since its beginning and shows no signs of slowing down. With such a quality product and their pricing strategy, there is nothing stopping them from continuing to grow at their current rate.

Thanks for reading this article. We hope now you have a clear idea about how ClickUp makes money. If you enjoyed reading it, please show us some support by sharing it on social media.

In case you have any questions or doubts related to this article, feel free to drop us an email. We’ll try to answer as soon as we can.

Thanks for visiting, and have a nice day!

How Does Asana Make Money? Business Model of Asana

How Does Airtable Make Money? Business Model Of Airtable

How Does Monday.com Make Money? Business Model of Monday.com