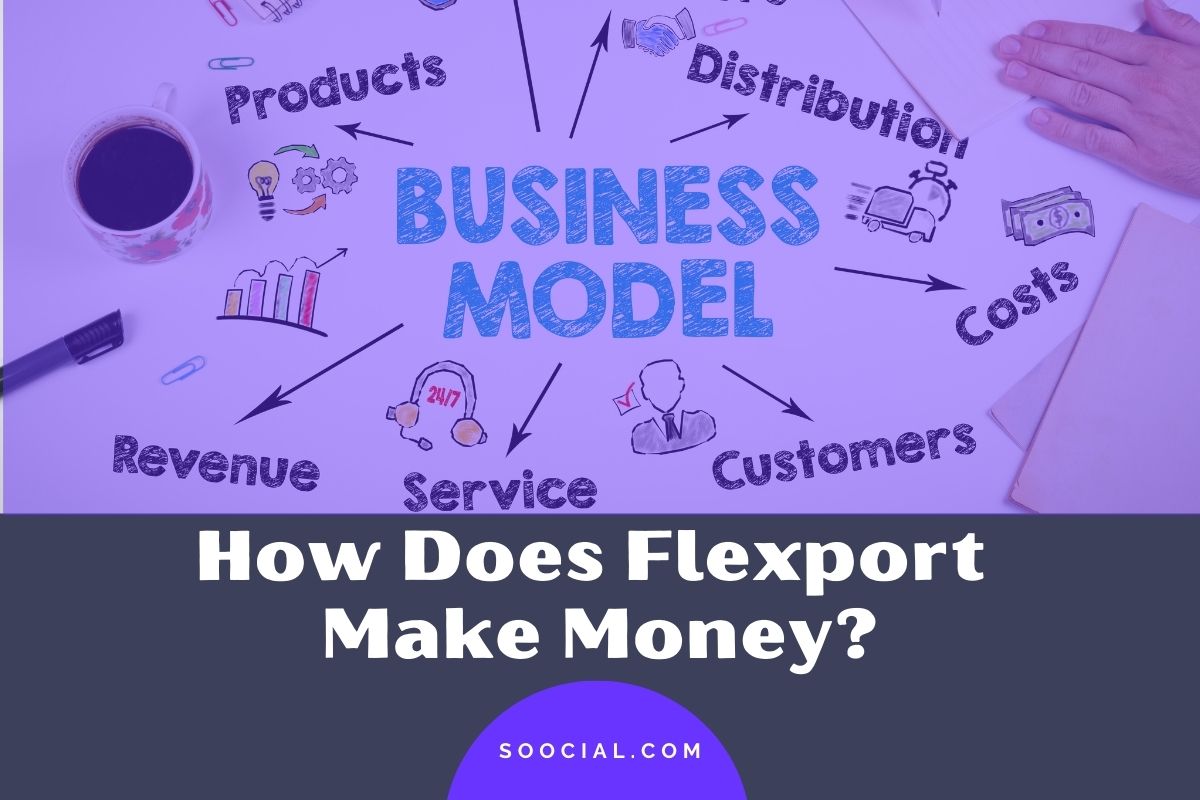 Flexport is a freight logistics company with the goal of bringing transparency to a historically opaque industry. In this article, we’ll take a look at how Flexport makes money and the growth strategies they use to scale and maintain profitability as a business.

They provide not only shipping but a fully digitized supply chain platform, so you always know exactly where your package is at all times. Furthermore, they offer completely bundled supply chain services that allow your business to solve any unforeseen problems that may arrive in the shipping world: customs, fragiles, hazmats, etc.

In addition to being a software platform for freight forwarding, their bundled services include logistics, trade, finance, and supply chain.

Obviously, if Ring founder and CEO Jamie Siminoff is willing to devote his personal time to appear in a promotional video endorsing Flexport, this brand has impressed some very important people.

Supply chains are the lifeline of the world and for companies that want to maximize their supply chains, Flexport is the answer.

If you want to understand the level of success Flexport has had, you only need to check their client list: Georgia-Pacific, Nomad, Ring, and others.

Whatever freight-related problems your business may have, Flexport has the answers through a wide range of services that are fully digitized for the 21st century, post-pandemic environment.

Before Flexport, most forward freight was running on paper and, as Siminoff has described, was two guys talking on the phone.

The very nature of shipping is that goods change hands quite often, and it can be hard to pin down responsibility on a particular party, especially if those goods are traveling from country to country.

Since Flexport has everything digitized, tracking is easy. In fact, the customer does not even need to track because the updates are sent to the customer through the internet on the platform, which is fully interactive. Of course, hard copy printouts are still available for customers that need them.

Because Flexport’s cloud services are state-of-the-art, the data is secure and stable. Furthermore, even complicated data can be processed quickly and aggregated appropriately on the Flexport platform.

In an interview with TechCrunch, Flexport CEO Ryan Peterson said that a lot of legacy businesses have been going out of business, due to pandemic quarantines.

The solution to this problem has been forward-thinking, high-tech companies like Flexport. Not only does Flex use its cloud-based platform to serve its customers reliably and efficiently, but it also helps legacy businesses adapt to these turbulent, post-pandemic times by assisting them in making the transition from legacy businesses to digitized businesses.

Peterson explained that the inefficiencies in the shipping business have been rampant.

Because Flexport is a fully digitized platform, they can send the certified documents electronically, and if there is a problem, they have several other options for delivering a hard copy.

Therefore, Flexport never has to have their customers deal with a situation when the cargo arrives before the manifest and customs agents are waiting for some plane to arrive.

Flexport has excellent ocean shipping, for both FCL and LCL. Their air and ground shipping are quite reliable as well.

Their FCL shipments, full-container load, are tracked by transponders and observed on their platform. Furthermore, shipping times are calculated based on well-aggregated data, for more effective planning and reduced shipping costs.

LCL, less-than-container-load, shipments are also available for customers that are willing to share container space with other shippers in order to save on shipping costs.

With non-digitized forward freighters, there are lots of opportunities for costly errors, due to space calculating costs with multiple customers sharing the same containers in LCL.

Because Flexport is also a platform, these miscalculations are extremely rare for them because their technology enables them to gather, process, aggregate, and manage huge amounts of data into secure data sets.

This accuracy allows them to have full awareness of every cubic meter of container space and a reliable conclusion as to which customer and cargo that space would be appropriate.

In addition, Flexport customers using LCL will only share their container space with properly vetted shippers and customers within Flexport’s personal network. This network has over 500 nodes around the world as is built with security, safety, transparency, and speed in mind.

Several former airline executives have been hired by Flexport to advise them on every aspect of air shipping, including customs regulations and helping customers that have problems in that area.

Their ground shipping allows full collaboration within the platform of every person involved in the shipping process, from CEOs to truck drivers, allowing for real-time data regarding traffic, road closures, etc., to be integrated into the platform.

Anyone who has been delayed by customs officials or has been to pay fines can appreciate the financial dangers and legal hassles of shipping from country to country.

Flexport has its own team of customs brokers to guard costly errors regarding paperwork and procedures for items that have to pass through customs.

All Flexport customers must have their shipping data run through a Harmonized System Code to eliminate such potential entanglements before the item is actually shipped.

Since 2018, the US and many other countries have been engaged in a trade war with China. The COVID-19 pandemic has not improved relations.

Shippers have to concern themselves with tariffs, quarantines, and other unforeseen regulations. Flexport’s trade advisory service can help insulate customers from such “black swans”.

Duty drawback is another service that Flexport customers can take advantage of. Instead of going through the red tape of filing with different governments to get duties refunded, Flexport can perform that service for their customers and allow business owners to focus on running their business.

Even in Shakespeare’s The Merchant of Venice, risk was a very real part of the shipping merchant’s world and almost cost Antonio a pound of his own flesh! If you ship, your goods must be insured!

Flexport has a synergistic partnership with Marsh, a major insurance broker. Not only does Flexport offer to handle the paperwork for customers’ insurance policies, when the need arises, but they will also file the claims as well.

Since black swans are part of the shipping business, it is important to have access to financing to cover unforeseen costs.

Flexport is able to use its status and even its technology to negotiate favorable financing terms for its clients, and they do not need to put up a “pound of flesh” as collateral.

Order management enables visibility and control down to the SKU level through data management and business insights. Threaded messaging is saved for all POs, purchase orders.

Sustainability is a major concern for twenty-first-century businesses in general, including shipping.

The carbon offset enacted by Flexport includes a partnership with Carbonfund.org, a company that offsets emissions up to 100% through renewable energy projects and anti-deforestation efforts.

Flexport also provides a free Carbon Emissions Calculator which allows shippers to track and analyze their carbon footprints in real-time.

They can integrate their software systems with Flexport’s cloud-based, forward freight platform, or they access pre-built integrations because Flexport supports most EDIs, Electronic Data Interchanges.

Jamie Seminoff has mentioned that Ring products often contain lithium-ion batteries, which qualify as dangerous goods, and that Flexport has removed a lot of stress and risk from the equation by ensuring that all compliance procedures and paperwork are in order.

Moving such goods through customs requires that the shippers be “DG trained”. As of the time of this writing, Flexport is the only US forwarder that is also an IATA-accredited training school. They make sure that your team is DG trained because they can certify your team.

If you look at Flexport’s yearly revenues over a four-year period, Flexport has had significant growth with some volatility. There was a severe drop in 2019 and a 5x explosion in 2020.

Flexport is making a profit according to the revenues posted above and the fact that Flexport did a 5x from 2019 to 2020. Flexport is profitable based on the $3.2 billion valuation given by SoftBank.

Those who do not know of Mr. Siminoff might wonder why his name has been dropped so much.

Siminoff took a start-up on the reality show, Sharktank, and after getting insultingly low valuations by the venture capitalists on the show, turned his start-up into the leading door security company in the world before selling it to Amazon for one billion dollars.

He has the vision to see potential in companies that others do not. So, when he speaks of the potential of Flexport, he is someone worth listening to.

The question, “Why Is Flexport So Successful?”, was answered by Siminoff himself. “The fact that I don’t have to get involved with Flexport to a deep level, is why it’s successful.”

Flexport lets CEOs be CEOs. They do not have to worry about monitoring important shipments because they know that anything sent through Flexport will be taken care of. This confidence frees them up to be the visionaries that build and lead disruptive companies.

In order to be capable of providing this freedom for CEOs, Flexport has to be not just a forward freighter, but a technology company. That is why Flexport CEO Ryan Peterson was able to negotiate a billion-dollar deal with SoftBank while wearing his slippers.

Conclusion: How Does Flexport Make Money?

Now that you have gone through the entire guide, it is now time to conclude the article. We have covered everything about the business model of Flexport, the different revenue streams it uses to generate revenue, its history, and the interesting facts about the company.

Flexport is one of those companies that comes along every once in a while to completely blow you away. We’ve learned about their work culture, their origins, and the kind of determination it took to start this massive business.

It’s clear they are at the top in terms of what they do. So what does the future hold for Flexport? That remains to be seen, but if they continue building their company with the same ferocity they launched into the market, your guess is as good as mine.

Phew! We made it to the end of this article. If you’ve read the entire thing – congratulations! If you liked reading it, feel free to share it on social media.

Have a nice day 🙂

How Does ShipBob Make Money? Business Model of ShipBob