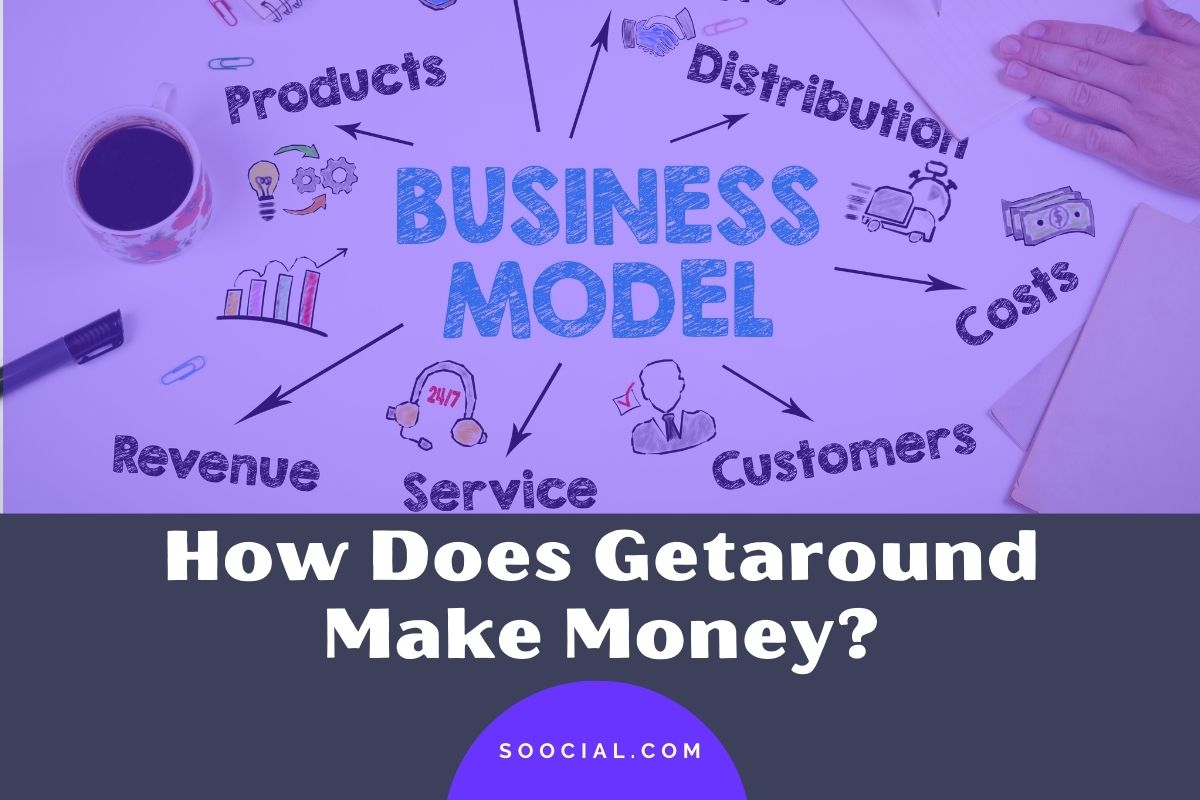 If you’ve never heard of Getaround, it’s exactly what it sounds like; a way for you to get around without having to own a car. Pretty neat, right?

The biggest question surrounding any company is, “What is their business model?” If you don’t know how a company makes money, you can’t make an informed decision on whether or not to invest in it.

Getaround is a peer-to-peer car-sharing service available throughout the United States and Europe. With Getaround, individuals can quickly book cars for a few miles or a few hours. People who own cars can also lease their cars out. Getaround bills itself as a way that the standard car owner can become an “entrepreneur.”

So, how does Getaround the platform make money? It’s clear that car owners get paid for their car time. But the business model of Getaround may seem a little more nebulous.

Getaround operates on a marketplace platform business model by connecting car owners with car renters. The company makes money by charging a 40% commission fee on each rental booked through the platform.

Getaround earns revenue by taking a fairly large portion of the rental earnings. In fact, the commission rate of Getaround is 40%. And since Getaround doesn’t have to actually supply the cars (or anything), the earnings are considerable.

Getaround’s business model is revolutionizing the car industry and threatening traditional rental companies. The company has achieved impressive growth by disrupting the car rental market with a peer-to-peer business model that allows owners to earn extra income from their vehicles while giving renters the freedom and flexibility to enjoy a car on-demand.

For the car renter, they download the app and find cars nearby. They’re able to rent a car for a very short period of time. Often, the rates are much, much less than for a car rental service.

For the car owner, they download the app and then sign up their cars for rental. This is referred to as “starting a business” because the individual essentially becomes the sole proprietor of a car rental business. A car owner can sign up with one car or multiple cars. They then install hardware that Getaround uses to control and protect their car.

Getaround provides the app that both car renters and car owners use. Getaround also provides the hardware needed to safely transfer control of the vehicles from renter to renter, without the car getting potentially lost or stolen. Ultimately, Getaround makes a sizable commission from every rental.

For Getaround, the business model offloads many of the traditional costs regarding car rentals. First, they don’t have to pay for parking lots, because the vehicles are parked in open locations. They don’t need to pay for the vehicles themselves or the maintenance thereof, because the car owners do all of this for them.

Getaround also has a substantial number of fees associated with not turning vehicles in properly, not cleaning vehicles, driving vehicles too far, or losing their hardware. These fees ensure that Getaround doesn’t lose money on its transactions.

However, Getaround is still building. In 2019, they acquired Drivy, which allowed them to move into Europe. While they are valued at nearly $1.7 billion, they are currently taking in revenue less than $100 million a year, making them still firmly in the startup category.

How Does Getaround Make Money?

Getaround makes money through two venues: startup costs and rental costs. Those are the primary methods of making money. It does have secondary, incidental sources that include operational fees and pass-through fees.

For every vehicle, there’s a $100 startup cost. There’s also a $20 monthly data subscription.

So, a vehicle owner interested in setting up one car will pay $100 upfront and then $20 a month. This covers the Getaround Connect device, which is the device that locks, unlocks, and tracks the vehicle.

Because the vehicle has to be tracked automatically, it also requires a $20 data subscription.

A vehicle owner setting up five cars would pay $500 upfront and then $100 a month. So, the costs do increase fairly quickly.

As of 2019, Getaround had reported about 20,000 vehicles on the road. Alone, that would have been $2 million in upfront income and $400,000 in monthly recurring data subscription fees. Though it is unclear how much of that data subscription goes to profit and how much is paid out to the data provider.

As Getaround grows, these costs cover the growth and ideally aid the organization in remaining scalable.

Rental costs are what Getaround is designed for. If a car rents for $20, Getaround will get $8 of those dollars and the rental owner will get $12. By taking such a large cut, Getaround is able to make a profit.

This profit does have to go through things like marketing and advertising. But because Getaround doesn’t have to maintain a large fleet of vehicles, its operating expenses can be fairly lean.

These rental charges are applied to the user’s rentals and are not a part of the car owner’s profits, so the car owner does not see this as revenue. It goes direct to Getaround and covers their administrative costs, risks, and insurance.

But at the same time, Getaround has been growing aggressively and has invested a lot of time and money into the costs of expansion.

In addition to the normal charges, there are also a number of fees charged by Getaround to ensure that its platform operates smoothly.

There are also charges that guests may incur from other guests, such as key charges, fuel charges, electricity charges, and more. These charges are considered pass-through charges and wouldn’t be a part of Getaround’s monetization schedule.

It is very likely that Getaround does make money from insurance, but insurance is optional as the guests can choose whether they want extra insurance.

Most drivers already have insurance through their existing insurance plan and consequently will not need the additional insurance packages.

These costs are all in USD. But the European version of Getaround also has very similar costs, they will just be adjusted based on where they are.

Getaround had raised a total of $600 million in financing by October 2020. It was able to grow substantially during COVID.

Its last funding round was its Series E funding round, which raised $140 million. Getaround may still procure more investment capital as it is still classed as a developing startup.

Getaround is backed by Softbank and has a valuation of about $1.7 billion. It has about 5 million active users throughout America and Europe.

This acquisition was part of Getaround’s broader expansion strategy to create the world’s largest and most trusted on-demand car sharing marketplace.

Because it’s a disruptive industry, Getaround isn’t necessarily focusing on revenue but instead growth.

Getaround is not profitable yet, but their CEO Sam Zaid expects it to be profitable very soon. The company has been aggressively expanding its business in new markets and growing its global presence.

Conclusion: How Does Getaround Make Money?

So, here we are at the end of our quest.

To sum up, Getaround is a sharing economy app for cars. The company allows users to rent out their personal vehicles directly to others. Similarly, renters can find the best car rental deals and book their cars right through the app. Two primary ways Getaround makes money are through startup costs and commissions on each car-borrowing transaction.

Getaround has created a way for individuals to make money off their own cars when they are not using them. This is similar to short-term rental companies such as Airbnb, which allows people to profit from rooms in their homes during certain times that might otherwise be vacant.

By this point, you should have a good understanding of how Getaround makes money. They are not quite like the traditional car rental companies known for imposing high fees on their customers.

This helps in alleviating car ownership and makes users more environmentally friendly. It also frees up parking spaces and reduces traffic congestion. Getaround utilizes car data better since they have access to know about the car’s condition at all times as long as they are renting it.

We’ve learned how Getaround does such a great job of making car-sharing profitable. It’s not surprising at all that Getaround is doing so well. It’s not only convenient, but it’s also cost-effective and a great way to make money from your idle car.

They make money because they scale their services well and constantly improve them by listening to their customers and adjusting their business model base on user behavior.

Thanks for taking the time to read this article. We hope you found it useful and if you did, please share it with your friends.

Thanks for visiting, and have a great day!