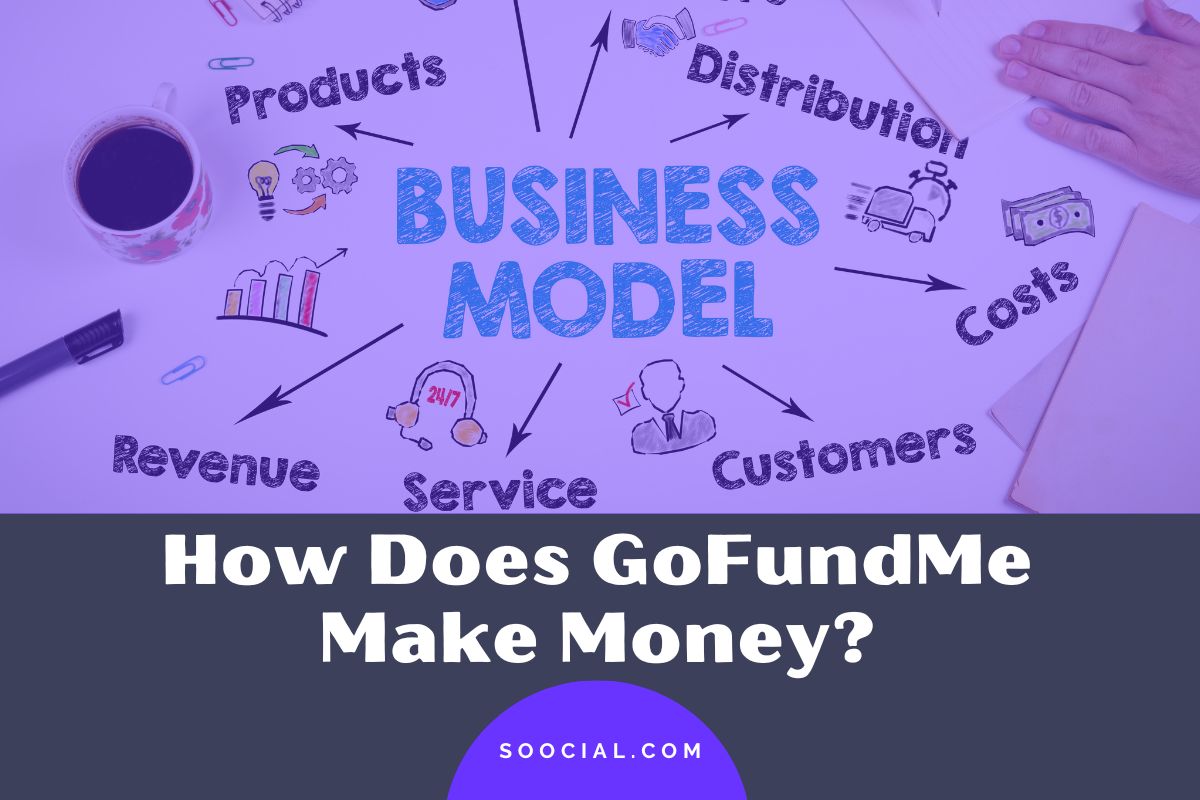 GoFundMe is one of the most popular crowdfunding platforms in the world. The company charges fundraisers transaction fees on the donations they receive. In addition, the company has several other revenue streams.

GoFundMe primarily makes money via transaction fees on payments sent to those who fundraise on their platform. They also make money on direct donations from users.

Founded in 2010, GoFundMe is one of the main online platforms individuals and charities go to raise funds from their local and online communities. The company is based in Redwood City, California but has offices around the world. GoFundMe was started by Brad Damphousse and Andrew Ballester.

In the site’s first 10 years, it raised over $9 billion for causes and individuals from 120 million donors.[1] It has since surpassed $15 billion in funds raised. GoFundMe remains a private company and doesn’t release much information about their revenue or other financials to the public.

What is GoFundMe & How Does It Work?

GoFundMe is an online crowdfunding platform where individuals and non-profits can raise money for anything from life events to illnesses to causes they care about.

Fundraisers create a landing page with photos, a description of what they’re raising funds for, how much they’re raising, and what the funds will be used for. They can then share their fundraising campaign on social networks like Facebook and Twitter to get donations.

People who are interested in donating can then click on a link and navigate to the fundraising page and learn about the fundraising campaign. If they decide to give, they can easily make a donation using a credit or debit card. Their donation then gets added to the tally at the top of the page showing progress towards the fundraising goal. They will also be listed as a donor by name or, if they chose to give anonymously, their donation amount will simply be listed.

As the initiators of the fundraisers make progress towards their funding goals, they can add updates to the page. This might include descriptions of how the funds are being used or why the funding goal has been increased.

It’s important to note that GoFundMe does not require that users hit their donation target to pay them the funds raised. It also doesn’t limit how long they raise money for. Users can keep their campaigns running for as long as they want. They can also take out money from the campaign as often as they want. The funding goal can also be increased or decreased at any point.

When the fundraiser is ready to use the money, they just submit a request to have the funds dispersed to an approved bank account. If someone is raising funds for a friend or family member, GoFundMe will get involved to confirm that the funds will be used for the person they are intended for and clarify how the funds will be given out.

At that point, GoFundMe takes a cut of the donations and disperses the rest of the money. The fundraiser can then use those funds in whatever way the GoFundMe campaign said they would. They can also continue to provide updates and thanks to donors.

GoFundMe also has a charity platform that raises money the company distributes to registered charities and other causes.

Making donations to GoFundMe does not entitle donors to charitable tax receipts unless they are giving to a charity through the platform. Crowdfunding is a form of fundraising that is generally outside official charitable channels. While some non-profits might use it for things like funding programs or replacing equipment, it is best known for its use to raise funds for individuals.

Some common uses of the platform include raising funds for medical treatments, paying for tuition fees, or helping out someone who has experienced a personal tragedy. After significant or traumatic news events, people often set up a GoFundMe for the victims. For example, after an Illinois shooting on the Fourth of July, people raised money for a child whose two parents were killed.[2]

GoFundMe does prohibit raising money for a number of causes, including if you are accused of a crime and are raising funds for your defense.

GoFundMe is a crowdfunding platform for individuals and non-profits. Unlike some crowdraising platforms it has few limitations on its campaigns. For example, people raising funds do not need to provide a gift or service in exchange for those funds like on platforms like Indiegogo or Kickstarter.

Fundraisers also don’t have a time limit — they can go on indefinitely. In addition, the person raising the funds gets those funds even if they don’t meet their fundraising goal. These features make GoFundMe a popular platform for raising funds.

GoFundMe is also extremely well known. The fact that so many people have used it to fundraise or to make donations to causes means that people generally think of it first when a tragedy strikes or they suddenly need money. Its also easy for donors to use it since they might already have an account on the site.

GoFundMe’s business model is focused on becoming the default crowdfunding platform for any kind of individual or non-profit fundraising campaign. By capturing a big percentage of the crowdraising market, GoFundMe can then capture a significant amount in revenue from the transaction fees related to those donations.

While GoFundMe doesn’t have a platform fee, they do charge a payment processing fee on each of their donations. This amounts to 2.9% and a $0.30 fee for each transaction. With millions of donations taking place on the platform every month, that adds up.

However, people from around the world can donate to campaigns so long as they have a credit card or debit cards to do so. While limiting their reach allows the company to build up their business in the countries that they’re targeting, it does mean that competitors can take over other markets. That makes it harder for the company to later expand into those geographic regions.

Essentially, GoFundMe has the business model of a payment processing company or a peer-to-peer payments company. However, they create pages to help support and promote successful crowdfunding.

Competitors include international and domestic fundraising platforms like FundRazr and WhyDonate. But payment companies like Venmo and PayPal are also competitors as individual fundraisers sometimes share links to their accounts with those companies rather than creating a GoFundMe page.

While GoFundMe does not share their financials publicly, they likely have significant business, staffing, hosting, and development expenses. Despite those costs, it is believed that the company is profitable since they haven’t actively raised funds since 2015.

How Does GoFundMe Make Money?

The company does not share their financials, so there is no way to know how much they make on each of these sources of income.

GoFundMe charges 2.9% plus a $0.30 fee for each donation it processes. This does not get paid by the donor, nor does these deductions show up in the fundraising page’s cumulative total. Instead, the funds get taken off the total before money is dispersed.

That means that if someone raises $10,000 they will not get that full $10,000. The transaction fees will be taken off that amount first.

It is unclear how much GoFundMe makes from this source of revenue.

GoFundMe is currently a private company. In 2015, GoFundMe’s founders agreed to sell a majority stake in the platform to Accel Partners and Technology Crossover. They later stepped down from their roles in the company. The deal valued the company at $600 million.[4]

Prior to the company’s sale, GoFundMe went through just one round of funding and raised a total of $3.2 million.[5] The fact that the company hasn’t raised additional rounds of funding likely means that the business was profitable very early on in its evolution.

While GoFundMe’s current valuation is not public knowledge, it likely grew significantly since 2015. Recent revenue numbers are also hard to pin down. However, GoFundMe does public share how much they have raised on behalf of those using their platform.

GoFundMe is likely profitable. The company doesn’t share its revenue figures with the public, but the fact that the company hasn’t raised money since 2015 suggests that it has long been profitable.

It is unclear how much the company makes on an annual basis or whether its revenue has been increasing. Regardless, it’s safe to say that the business of helping raise funds is a profitable one.

GoFundMe has been around since 2010 and has grown quickly since then, especially over the past few years, as more people turn to online fundraising platforms like this one in order to help their friends or family members achieve their goals when they need financial assistance most.

As we’ve seen, GoFundMe has created a business that is beneficial for both the pledger and the fundraiser. With quick and easy payments, an ever-growing community of donors, and a wide variety of fundraising opportunities, GoFundMe is an ideal platform for both small businesses and individuals looking to raise money quickly and easily.

If you’re thinking about starting or expanding your business through crowdfunding, then consider using GoFundMe as your go-to platform!