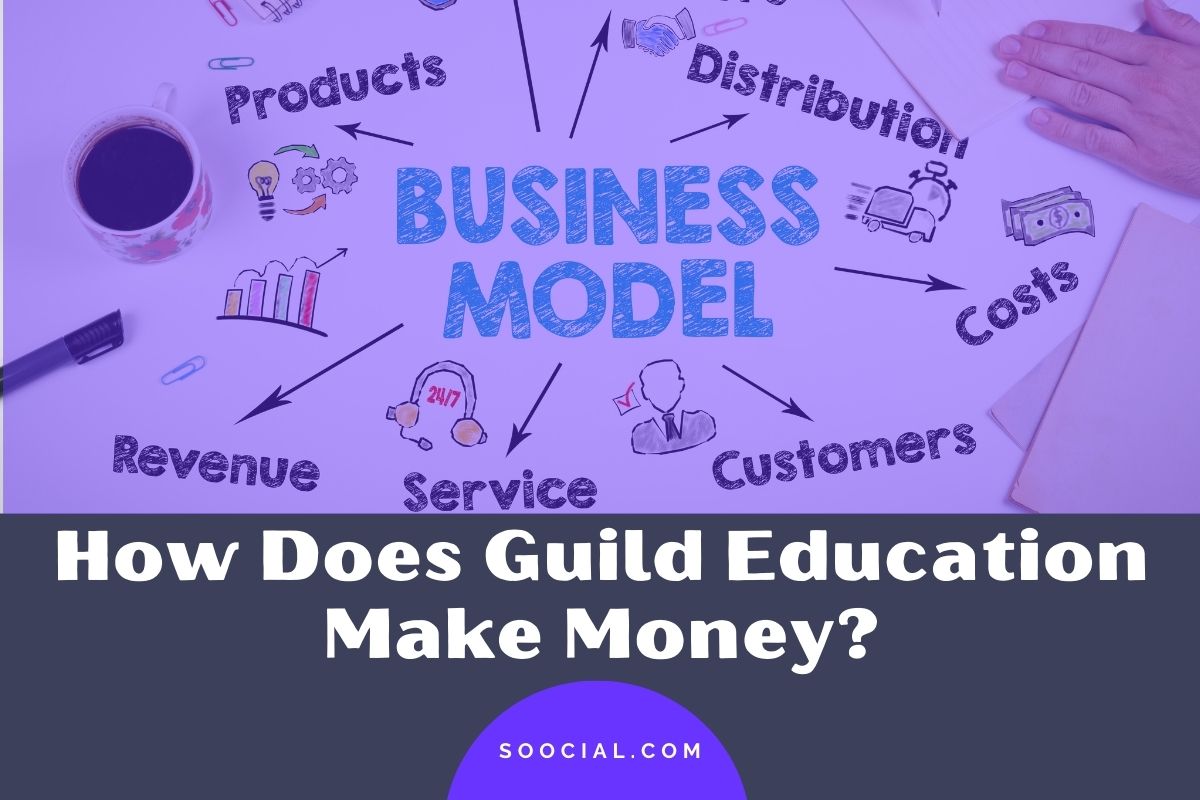 Since Guild Education is such a new startup in the industry, it’s not surprising that about half the people we surveyed have no idea how does Guild Education makes money. However, this still is a very interesting question which we’ll try to answer in the article below.

Guild Education is a technology company that connects employers with top learning providers to deliver high-quality education to employees. It earns money by taking a percentage of the tuition revenue of each education program.

Founded in 2015, Guild Education is a company seeking to bridge the gap in unemployment through adult education.

Their mission is to “unlock opportunity for America’s workforce through education and upskilling with a double bottom-line business model that does well by doing good”.

In their dedication to this mission, this woman-owned tag team created a powerful program valued at over 4 billion dollars.

Their profitable business model earned CEO Rachel Carlson a spot on Forbes’ list of America’s Richest Self-made Women of 2021. The company is doing exceptionally well in just 6 years, and experts expect the momentum to continue.

Guild Education operates on a platform business model connecting employers with top colleges and universities to facilitate the delivery of education.

It takes the hassle out of learning by connecting two core groups:

In doing so, the company provides its students the opportunity to achieve their greatest potential. Students of the program can complete their high school education, obtain a Bachelor’s or Master’s degree if they so choose.

In an interview, Carlson admits to having been an adult student herself. She finished two Master’s degrees while simultaneously building Guild. Now she has her MBA and Master’s of Education and is planning to study digital technology in the near future.

When asked what keeps her motivated, “absolutely our students” she says. “Education can unlock unimaginable opportunities for people. I think if there’s one key in our society today, in 2019 for Americans, it’s the power to learn”.

Her personal history and beliefs in adult education drive her motivation to help other adults achieve similar success through Guild.

According to Carlson, “the dream is to have Guild be available and accessible to every student.” She credits working with “the smartest people in the world” for making her dream much closer to becoming a reality.

Guild is the catalyst for more than 4 million Americans having access to higher learning. Over 40,000 adult students are earning an education through its program.

“We believe if we do our job correctly, that 20, 30 years from now, many, many millions more Americans will be prepared to succeed in the future of work” says Carlson.

Guild Education partners with a number of colleges and universities across the nation. They seek only those who can provide their students with the best quality education at an affordable cost.

The company sticks to a “high quality, low cost” model, evaluating the 3,000 schools in the country.

They take into consideration important yet untracked data such as what is the graduation rate for single mothers? Or how flexible is the college’s school calendar for working adults?

Questions like these have not been tracked by the federal government. Recognizing this, the team at Guild Education took it upon themselves to create a database. This database tracks this information in order to know which schools to partner with. It will also determine which schools will provide the best bang for their students’ buck.

With Guild, students can earn a degree, and learn a trade to obtain a trade diploma or become certified.

Additionally, 88 percent of future Guild students cite their reduced tuition payments as the reason for their decision to enroll. Employers pay for education directly under the program.

This way, Guild affords lower-income students a chance at a life-changing education that they may not have afforded otherwise.

A key component of the company’s business model is its onboarding of employers.

Regarding employer responsibility, Carlson says “I think we need to have a lifelong learning economy. And I think we need our employers to be a partner in that so that everyone who’s working has the opportunity to learn and advance as our economy evolves and scales and that things we need to know how to do evolve and change. And so I’m hoping we can be the catalyst that really changes how America thinks about lifelong learning as not a privilege but a right.”

There is an enormous draw for employers who desire to strengthen their workforce to join forces with Guild. The program connects students to notable employers who invest in their education. This allows them to gain a greater skillset and become an even better asset to their company.

The platform also reassures employers that students can access a Learning Marketplace. This program aligns a student’s education with an employer’s strategic career pathway. The company boasts that with its program, part-time students have a completion rate of two times the national average.

Guild promises access to one-on-one coaching to students to help support them by driving and maintaining their career progression. The benefits outweigh the risk for employers who wish to gain and retain talent.

Using the program, Chipotle boasts 85 percent of its crew members as enrollees. In addition, they’ve attained a 90 percent retention rate and an impressive 7.5 time promotion rate.

How Does Guild Education Make Money?

Having the mind of one of the richest self-made women behind the company is certainly a factor in their progression.

The hard-working mom of twins earned her spot alongside superstar icons such as Rihanna and Dolly Parton. Guild is most definitely doing something right.

Guild partners with employers seeking to educate and equip employees with tools necessary to obtain a degree, and career progression.

As an education strategy partner to a number of Fortune 1000 companies, Guild Education builds trusting relationships that quickly become profitable. “People build great things off of relationships. It starts great relationships and then you go from there,” Carlson says.

Prominent companies such as The Walt Disney Company, Microsoft, and Walmart reap the benefit of partnering with Guild in a number of ways.

By paying their employee’s tuition fees, they earn a reputation as a great company to work for. A stand-out company is one that invests in the betterment of its employees.

Guild also promises partnering companies that their recruitment number could go up by up to 30 percent.

Additionally, companies can expect to experience a much smaller turnover rate with current and future employees enrolled with Guild.

A company typically seeing a 50 percent employee turnover rate will see a 5-7 percent turnover rate with Guild. The ability to retain quality employees drives better business and further entrusts consumers to the brand.

Guild earns a large majority of their revenue from universities redirecting the money that they would typically allocate towards advertising. They instead pay to have access to Guild’s qualified candidate pool, technology, payments, and student services.

Though the company does not share how much universities pay, some programs spend over $4,000 to attract each new student. Forbes estimates that 2020 revenue reached nearly $100 million.

According to their website, “Guild students enrolled through their employer are 2.7x more likely to retain at work than their peers”.

Also, black employees enrolled in the Guild program are more than twice as likely to be promoted through their employer. With statistics like these, it’s no wonder investors are eager to join the Guild Education program.

Investors such as Red Link, Salesforce Ventures, and General Catalyst donate millions to the company. They can expect it will be put to good use as Guild promises to take their platform to new heights.

While the company has not divulged its exact revenues, it is on an obvious upward trajectory. Carlson reveals to have doubled their revenue since March of 2020.

In 2019, the company more than doubled its previous funding round. It earned $157 million in its series D funding round, per a report from EdSurge. This placed the company at a $1 billion valuation.

Such an achievement earned it the coveted “unicorn” status. This is a term for a start-up or private company valued at over $1 billion. Not many start-ups achieve unicorn status. Those that have include well-known companies such as SpaceX, Instacart, and Clubhouse.

And in a 2021 Series E funding round, Guild raised $150 million. The round was backed by investors such as Bessemer Venture Partners, Cowboys Ventures, and more. This latest funding round helped the company more than triple its previous $1 billion valuation in 2019 and brought the company to a new valuation of an incredible 3.75 billion dollars.

In addition to this, the company wants to continue in its efforts to partner with historically black colleges and universities. This will foster greater diversity in the workplace.

Is Guild Education Making a Profit?

Guild Education has surely emerged as a force in the industry.

The company earned a spot as one of three women-owned companies on Forbes’ The 100 Cloud. This list recognizes companies for their influence in tech, and operation on private cloud networks.

Reaching over 4 million in under 10 years, their business model is rapidly drawing more interest to their program.

So that’s about all we have in this guide for how Guild Education makes its money. We discussed their business model in detail and listed all their revenue sources. We hope you enjoyed reading this article, and it was able to give you an insight into its business model.

As the world becomes more and more online, it is crucial for professionals to develop new skills that can help them advance their careers and business. With Guild Education’s immersive training and courses, members can turn from ordinary people into leaders and get ahead of the curve in designing, building, coding, and marketing for the web.

The Guild Education business model isn’t perfect, but it’s not a bad one either. There are some things that could be improved on from a consumer point of view, and if they were, we think people would be happier with the service as an all-around product.

Anyways, what do you guys think about Guild Education? Let us know all your thoughts via email. If you have any questions about this blog post, please drop us an email, and we’ll be glad to answer.

Until next time, keep learning and keep on hustling!

How Does Quizlet Make Money? Business Model of Quizlet