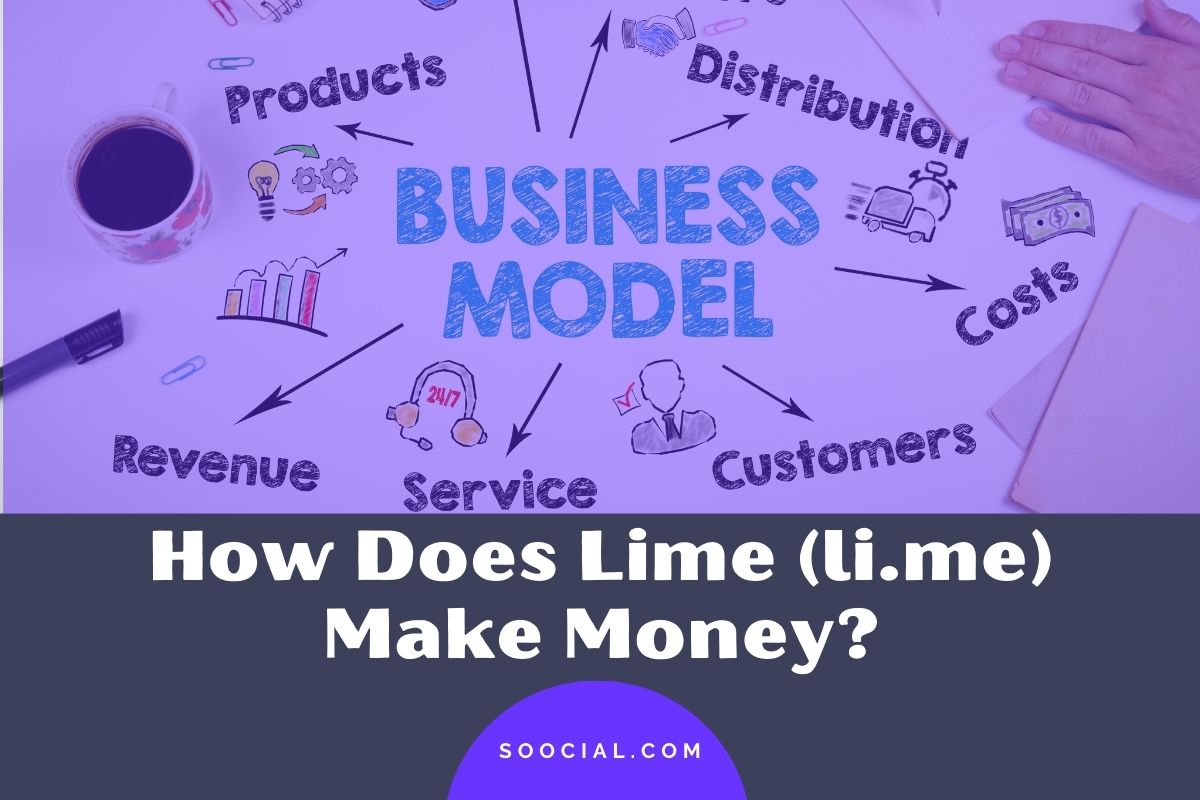 Lime, formerly known as LimeBike is a San Francisco-based rideshare platform that was born out of the idea that traditional borders and limits should not exist in renting a vehicle. It has a mobile application that allows you to find and unlock an electric scooter, e-bike, normal pedal bike parked near to you and you can ride it to your destination and leave at any location which makes the whole process quite convenient for the users.

As Lime launches in more cities, there is one question that’s on everyone’s mind: How does Lime make money? This article will break down its business model and explain how Lime generates revenue. We’ll also analyze whether Lime is a sustainable business and whether it can keep growing with its current business model.

Lime makes money by charging riders a fee every time they unlock and ride a scooter or electric bike. They also offer a monthly subscription called Lime Prime that waives the unlock fees and guarantees the availability of rides. For electric scooters and bikes, Lime charges $1 to unlock and $0.15 per minute. For pedal bikes, the company charges $1 per 30 minutes.

Like Uber and Airbnb before it, Lime invested in the sharing economy. However, rather than taxi rides and rooms for rent, Lime offers pedal bikes, electric scooters, and e-bikes. The business model of the company is relatively simple, so let’s break it down.

Getting around on a college campus or major urban city presents various challenges. While most people use their own vehicles or mass transit, both options have significant downsides. For drivers, parking can often be an issue, particularly when lots or garages are expensive. Mass transit requires passes, and stops may not be convenient.

Lime offers a way around these problems with micro-mobility solutions. Rather than walking to your destination, you can ride an electric bike or scooter. If you prefer to travel the old-fashioned way, Lime also offers non-electric pedal bikes.

When using these vehicles, riders have to follow these steps:

To make its products more widely available, Lime partners with cities and campuses. Otherwise, the vehicles could become a nuisance, and not one that a city would be willing to pay for regularly.

But, where does Lime factor in besides maintaining their proprietary app? Who takes care of the bikes and scooters when they’re not in use? That’s the other side of the business model.

Lime pays individuals called Lime Juicers to pick up and charge the electric devices overnight. The charging process is divided into two elements: harvesting and servicing.

During the harvesting stage, a Juicer will collect scooters and take them to a charging station. The Juicer scans the QR code for each scooter or bike before taking it to charge.

Once the device is charged up to 95 percent or more, the Juicer begins the servicing stage. During this phase, the Juicer takes the scooters to designated locations. After dropping them off, they scan the code again to verify their positions.

Lime also pays mechanics to repair the bikes and scooters if they’re damaged or vandalized. Riders and Juicers report the issues and the location and mechanics will come to pick them up.

If Lime is providing a valuable service, who is using these micromobility products? In Lime’s 2020 end-of-year report, it provided some insight into the average customer.

Here are some highlights:

Overall, it seems that the demand comes from people who want to avoid the hassle of motor vehicles.

In a major city like Seattle, San Francisco, or New York, Lime is a much more convenient alternative. Also, electric scooters and bikes are better for the environment.

While Lime is popular, it has a ton of overhead. The primary costs for the company include:

We’ll break down these costs in the next section.

How Does Lime Make Money?

Lime only makes money from its users. So, the more active users on the app, the more funds the company can generate. That said, the app is free to install and set up. Users only get charged when riding a scooter or bike.

As of the end of 2020, Lime operates in 135 cities across 30 countries. The company also surpassed 200 million rides by the last quarter of 2020. Fifty-five million of those rides occurred in 2020 alone. The average ride is now 13 minutes and spans 1.3 miles, which are both higher than pre-COVID-19 numbers.

If users are spending more time riding, Lime makes more money since it charges per minute. Lime charges $1 to unlock an electric bike or scooter, then $0.15 per minute afterward.

In Seattle, Lime operates around 500 scooters. With that number, the brand can expect to make $6,640 per day in the city alone.

Lime also offers a monthly subscription called Lime Prime. This subscription costs $5.99 per month and waives the unlock fees for users. Some cities don’t have unlock fees, though. In those situations, Lime Prime provides a 25-percent discount on rides.

Other than subscriptions and per-ride transactions, Lime doesn’t have any additional revenue streams.

As with many startups, the road to profitability for Lime was relatively long and winding. Although the company proved that there was a substantial demand for self-service transportation (aka micromobility), it was hard to make money at it.

The first roadblock to success was the fact that Lime had direct competition from another company, Bird. Bird scooters and bikes were actually first to market and generated a lot of buzz, so Lime faced an uphill battle. The company was founded in 2017, and its first funding round brought $50 million from investors.

Once the COVID-19 pandemic hit, Lime saw its shares dip significantly. As a result, the company had to lay off workers and scale back its presence in 12 markets. In May of 2020, Lime was still able to raise $170 million in its fifth round of funding. However, its valuation dropped to $510 million, about 79 percent of what it was the year before.

San Francisco-based micromobility startup, Lime is profitable, demonstrating that its business model for dockless bike share is sound. This is quite a feat for a company that started out as an electric bike rental company but has since expanded to electric scooters, electric pedal bikes, and more.

According to recent reporting, Lime is poised to make a profit in 2021. Even though 2020 was a challenging year for the company, it was able to make strides and finish the year strong.

By the third quarter of 2020, Lime reported that it was cash-flow positive and free-cash-flow positive. Considering how much money the company lost during its first couple of years, this news was pretty earth-shattering.

That said, the announcement does come with a bit of a catch. Profitability can mean different things to different people, and for Lime, the news meant that it was profitable for EBIT (expenses before interest and taxes). While the company didn’t provide exact numbers, it seems that the future is looking much brighter than it was in 2018.

For a breakdown of Lime’s profit margin, we’ll look at some numbers crunched back in 2019. It’s unclear if these numbers are still accurate or to what degree, but they offer some insight.

First, let’s look at the money Lime makes on a single scooter.

Now, let’s look at the costs:

The total per-ride costs are $2.75, leaving a profit margin of 20 cents for an average ride. Longer rides can make more money, but they also incur higher costs for charging, repairs, and maintenance.

With such a small profit margin, it’s hard to believe that Lime could be making much money. Making things worse is the fact that the average scooter’s lifespan is roughly 29 days. So, buying new scooters so frequently eats into their operational costs, which is why the company is investing in next-generation vehicles.

In 2020, Lime unveiled the Gen4 scooter in Paris, which is more rugged and low-maintenance. One cost-saving method is installing swappable batteries so that if a battery gets damaged, the scooter can still keep working and earning money.

That said, if Lime is EBIT positive, it stands to reason that the company will start turning a true profit soon.

Realistically, the most straightforward answer is to charge more per minute. That way, even if their operational costs remain the same, Lime can increase its margins significantly. It’s evident that the demand is there, so incremental increases shouldn’t affect their user base too much.

Conclusion: How Does Lime Make Money?

So, there you have it – information and insights on how Lime makes money. To sum up, the world is changing, and Lime wants to be a part of that. They want to create a platform where you can grab a bike from a city street corner, drop it off truly anywhere else, and then pay for the ride.

LimeBike not only helps people save money by relying on bicycles rather than cars and other modes of transportation, but it can also help improve your health as well as save the environment.

Now that you have read the above article, what do you think about Lime? In addition, if there are any burning questions that you have about Lime, please drop us an email. We’d love to hear your thoughts and answer your questions.

Thanks for reading. We hope you found this useful and if there’s anything we didn’t cover make sure to get in touch.

Have a nice day!