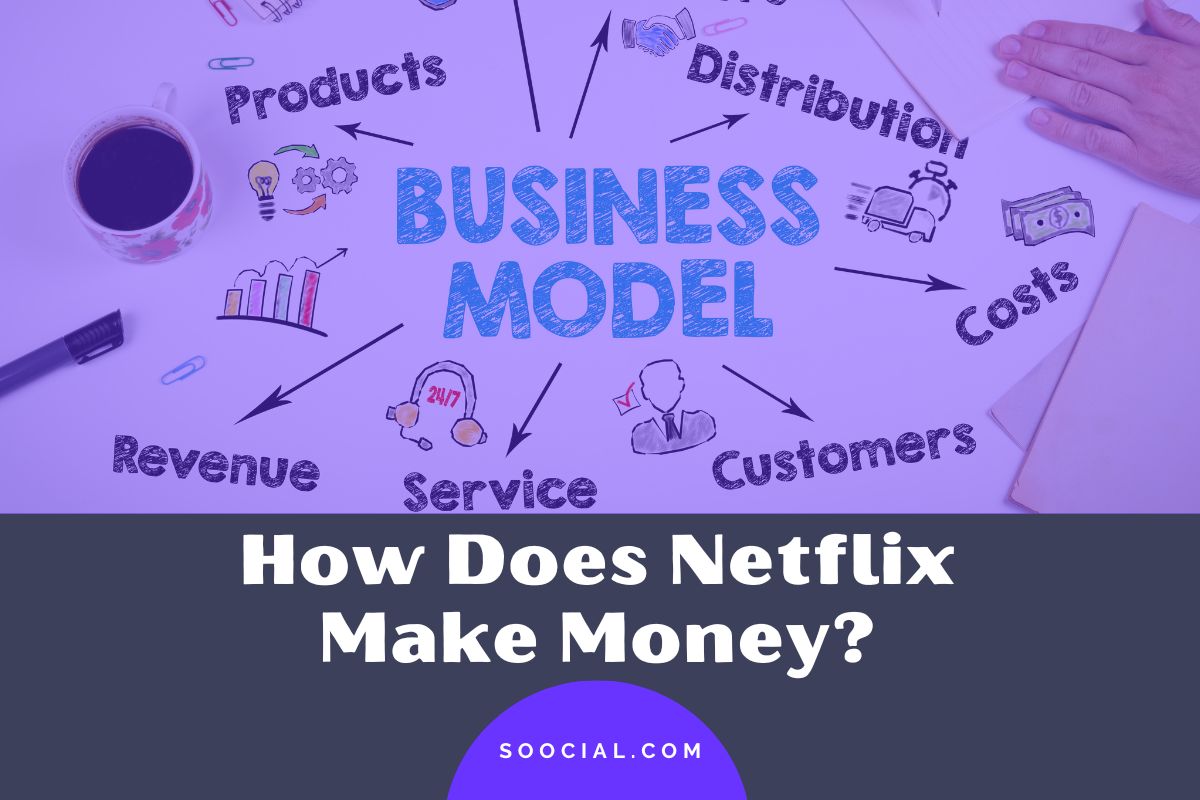 Netflix primarily makes money via subscription fees on its video streaming services. They also make money via DVD rental services. Beyond these revenue streams, they do not have other sources of income.

Founded in 1997 by Reed Hastings and Marc Randolph, Netflix began by selling and renting DVDs. They quickly transitioned to renting movies exclusively. They were known for their popular subscription rental service where DVDs were sent to subscribers by mail, and renters could take out as many videos as they wanted.

In 2007, the company pivoted into the streaming space, and in 2013, Netflix began producing its own shows. That included the popular show House of Cards, and later the runaway hit Orange is the New Black.

Netflix went public in 2002 via a successful IPO. However, the stock has struggled in recent years. The company has missed earnings expectations as it’s struggled to maintain subscription revenue due to increased competition.[1]

What is Netflix & How Does It Work?

Netflix is an entertainment company that charges customers for subscriptions. While they still offer DVD rentals, they are primarily a streaming service with 220.7 million subscribers worldwide.[2] As a global company offering services in many geographic regions, they stream content customized to different cultures, countries, and language groups.

Netflix is famous for giving away free trials that turn into paid subscriptions. Customers can set up an account for free and get unlimited access to Netflix’s library of TV series, movies, documentaries, stand-up comedy specials, anime, and international programming for a month. All Netflix’s content is ad-free.

Netflix’s catalog features hundreds of TV series, varying by geographic market. These include Netflix originals and TV shows made by other studios, like Warner Bros. Sony Pictures, and Walt Disney Studios. Stranger Things and The Queen’s Gambit are popular Netflix originals. Netflix also sometimes commissions continuations of TV shows previously aired on other networks. For example, the company aired a special four-part Gilmore Girls reunion in 2016.

Starting in 2013 with the first season of House of Cards, Netflix started delivering an entire season of episodes all at once, rather than once a week. This helped to popularize ‘binge-watching’ culture, in which viewers watch an entire season from start to finish. The move sparked a cultural revolution in how people watch TV with 73% of Americans and 90% of millennials admitting to binge-watching.[3]

Netflix also streams movies, both Netflix originals like the Irishman and movies by other production companies that they license, like the Godfather.

Netflix formerly allowed multiple members of a household to share a Netflix account under a single subscription plan. Using the same password, each member could access the plan and create a separate personalized profile.

However, in March 2022, Netflix announced that it is changing this policy because of the rise of password-sharing between households resulting in lost revenues. Under the new policy, an additional fee will allow subscribers to add up to two extra members living outside their household.

The company’s method for enforcing this rule could end up angering their loyal customers. Netflix will limit where people can use their subscription. Meaning people traveling or visiting a friend won’t be able to access their Netflix account to watch shows.

Netflix is a subscription service that uses the trial-to-paid-subscription business model. With this model, individuals are allowed to try Netflix with a free account. Unless the individual cancels their account before the end of the trial period, the trial account transitions into a paid subscription. Either trial-users forget to cancel the account, or they enjoy the service enough that they choose to become a paying customer.

Despite beginning as a DVD purchase and rental service, Netflix focused on video-streaming beginning in 2007 as the latter medium grew in popularity. Streaming offers a distinctive business model for accessing media that customers preferred over earlier models.

Compared with video rentals, cable television, and pay-per-view or on-demand, video-streaming gave customers more flexibility and choice. It allowed Individuals to conveniently access as much content as they wanted, whenever they wanted, and as many times as they wanted. This marked a brand new content distribution model.

At the same time, there are disadvantages to streaming platforms like Netflix for consumers. For example, a streaming provider might unexpectedly take content off their platform. This means that if someone is halfway through viewing a TV series, they will be unable to finish it. Customers also do not get to keep the content that they are paying for. They are paying for access, not ownership.

Since Netflix began their streaming service, numerous competitors have also come on the market. These include HBO Max, Disney Plus, and Hulu. With cheap and easily available alternatives, people have complained that Netflix prices are too high and that their selection is not as varied as it could be.

With this in mind, an important feature of Netflix’s business model is the creation of its acclaimed original content. Even if competitors are able to match Netflix in price and selection, they will not be able to duplicate Netflix’s original content. Because viewers cannot access this content from other streaming services, this is key to Netflix’s strategy for maintaining subscribers in the face of competition.

Another strategy Netflix uses to attract and maintain subscribers is to offer promotional offers to employees of partner companies.

Though Netflix invests significantly in keeping subscribers, time will tell how customers react to Netflix’s recent decision to crackdown on password-sharing. This might upset customers who are used to sharing their account with individuals in a different household at no added cost. They might also become frustrated at their account not working unless they are at home. That could cause some to leave Netflix for one of its competitors.

Netflix has significant business, staffing, development, marketing, and licensing expenses. However, in 2021 Netflix brought in $29.6 billion in revenue. That’s up from $24.9 billion in revenue in 2020. After expenses, Netflix made $5.6 billion.

In 2022, the company took swift action to lay off some of its workforce to compensate for its decrease in subscription revenue in a bid to remain profitable.[4]

How Does Netflix Make Money?

The company does not break down the source of their revenue by type of service, but in 2021 they brought in $29.6 billion in total revenue.

Netflix still has their amazing collection of DVDs and BlueRays and it is available to US subscribers who sign up directly for this service. The company charges $9.99 for the basic plan, $14.99 for the standard plan, and $19.99 for the premium plan.

The DVD and BlueRay plan isn’t as popular as its streaming service subscription, and it’s not clear how much the company makes from this offering. However, it remains a part of their business model to this day.

Netflix (NFLX) is currently a public company trading on the NASDAQ exchange. The company went public in 202 at $15 per share. In August 2022, the company’s stock was trading for around $244. That translates into a market cap of $108.5 billion.

Prior to going public, the company went through 13 successful funding rounds and raised a total of $121.9 billion. Well-known Netflix investors include TCV and Groupe Arnault.[5]

While Netflix has missed market expectations and reported subscriber losses in 2022, previously, the company was steadily growing their revenue. In 2021, the company made $5.1 billion, up from just $1.8 billion in 2019.

However, the company has lost subscribers in recent quarters and needs to find a way to increase revenue so that its recent profitability gains aren’t lost.

Now that we’ve looked at how Netflix makes money and its business model, it’s time to wrap up this article.

Netflix was founded in 1997, and it has since grown into one of the largest streaming services in the world. Netflix has a unique business model that allows it to deliver quality content at very affordable prices.

The company offers its customers unlimited access to TV shows, movies, documentaries, and more, starting at just $10 per month. It also allows users to download shows and movies onto their mobile devices so they can watch them offline without Wi-Fi. The service is now available in over 190 countries around the world.

Netflix is a great example of how a company can build a loyal customer base by offering something that people want and then providing them with an experience that makes them feel like they are getting more than what they paid for. They’ve shown great foresight in adapting to changing technologies and trends in how people watch and pay for entertainment.

The company created a unique brand identity with an engaging website, great customer service, and quality content. While also keeping costs down by using technology efficiently, outsourcing some of its operations, and using its scale as leverage in negotiations with content providers.

In addition, Netflix has also been able to grow rapidly by expanding internationally, which has helped increase demand further still!

Thank you so much for taking the time to read this article. We hope you found it interesting and would love to hear your thoughts on Netflix!

23 Binge-Watching Statistics You Should Know

18 Anime Fan Base Statistics To Sink Your Teeth Into

31 OTT Statistics to Help You Understand The Industry