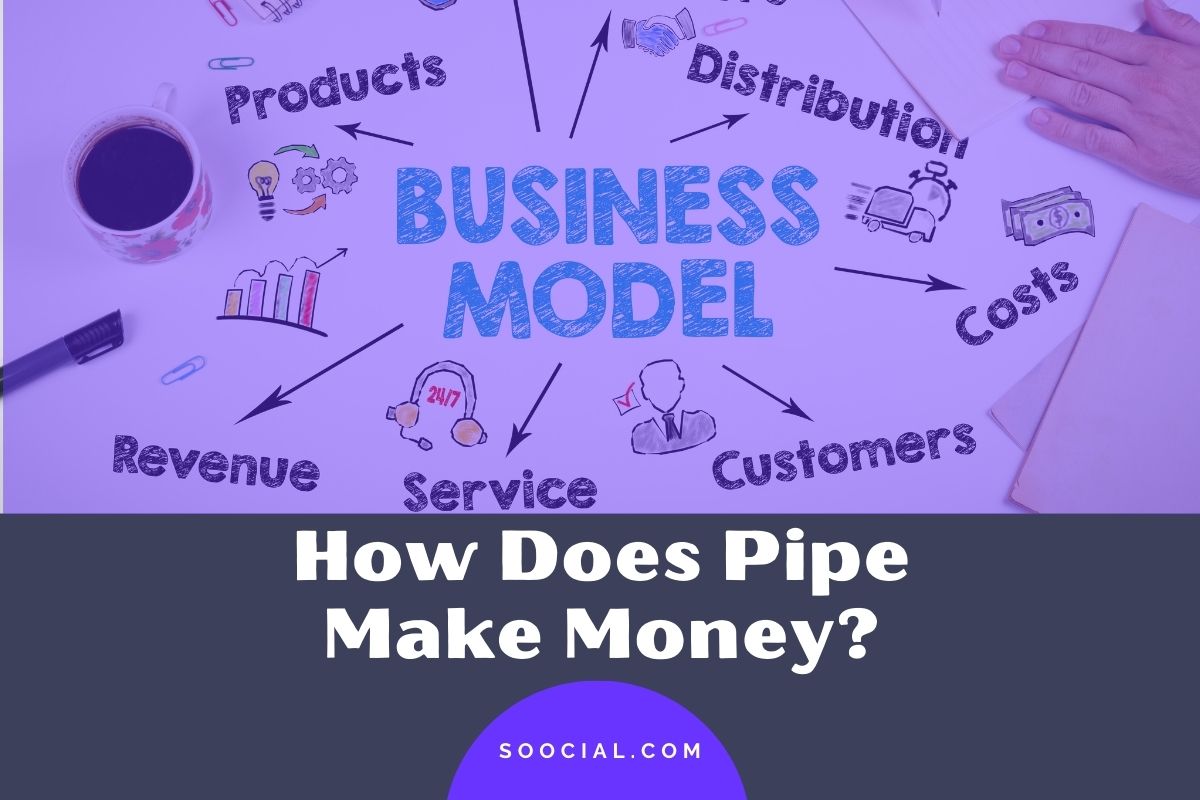 Pipe is a fintech company that helps companies with recurring revenue connect with investors so that they can get money early without requesting loans or diluting equity.

Pipe operates on a fintech platform business model as an exchange for recurring revenue contracts. It makes money by charging both the company selling revenues and the investor a trading fee of up to 1% for each transaction completed on its platform.

Pipe is like Robinhood for private companies. The platform allows both the company selling and the investor to cut out the bank by matching them directly.

Pipe has a profitable business model that combines the services of investment banking and venture capital firms with the democratization of crowdfunding. They provide these services at a fraction of the cost to their clients and with less dilution to the founding teams than the traditional financing techniques require.

TechCrunch describes Pipe as the “Nasdaq for revenue”.

In his appearance on Secret Leaders, Pipe co-founder Harry Hurst explains the ownership mentality that is part of his business model. According to Hurts, “Every person that works at Pipe is a real shareholder”.

Pipe provides a platform that acts as an exchange for recurring revenues. Its investors get these contracts for revenues at a discounted rate.

According to Pipe, these investors are “a vetted group of financial institutions and banks.” Originally, their customers were SaaS companies, they have since branched out to other types of businesses as well, such as:

Pipe’s pitch on their website is, “Convert your recurring revenue streams into instant upfront capital anytime”. Even their company name is part of investor culture. PIPE is an acronym for “private investment in public equity”.

Salesforce CEO Marc Benioff is one of their investors and his name recognition has to be good for marketing. Pipe also has its own blog that discusses the nuances of financing and the SaaS world.

Pipe co-founder Harry Hurst says Pipe’s marketing is not simply about favorable numbers. Hurst claims, “Investors that are investing are not necessarily price sensitive. They’re going in for a partnership.”

Pipe has the expenses one would expect of any large platform:

While Pipe has since branched out, Pipe had originally “made its bones” by targeting SaaS companies and there are no signs that they will abandon that strategy. SaaS companies, according to co-founder and co-CEO Harry Hurst, “have wonderfully predictable recurring revenues that, assuming negative churn, last forever”.

Warrants debt securities can be dangerous for startups because it allows creditors of loans related to venture debt to be entitled to equity at a predetermined price.

This predetermined price can have a nefarious impact on the fundraising activities of emerging cloud-based SaaSes in the later rounds of fundraising, especially if the endangered SaaS were about to have an IPO.

For those uncomfortable with all of this debt securities jargon, picture an analogy to William Shakespeare’s The Merchant of Venice.

The emerging SaaS is the Venetian merchant Antonio, venturing out onto the stormy seas of the cloud-market in a post-pandemic environment. In desperate need of financing, Antonio the SaaS goes to some VC firm or a bank, the Shylock of our story. Shylock offers a warrant debt securities contract that entitles him to a pound of flesh as collateral for Antonio’s financing.

Normally, Antoinio would never sign such a contract, but the post-pandemic world in its digitized-by-necessity new reality is in dire-need of timely, cloud-based solutions and Antonio so earnestly wants to help Bassanio marry the object of his heart’s desire, the Princess Portia.

Just when all hope is lost, Princess Portia, disguised as Antonio’s defense attorney, is finally revealed to be none other than the $2 billion unicorn known as Pipe and she saves the day with an entirely new asset class, recurring revenue contracts!

How Does Pipe Make Money?

Pipe, on average, charges a 1% fee per transaction. That fee is applied to both parties on each side of the transaction, the company selling ARR and the investor purchasing ARR. Pipe’s platform acts an exchange for its new asset class, recurring revenue contracts.

Pipe’s platform allows the investors to analyze data, including MRR, on various companies that are selling ARR. The platform users can use Pipe’s software to track ARR-selling companies and their performance, month-to-month and year-to-year, in a way similar to that of a stock investor using portfolio trackers, earning reports, and even Japanese candlesticks to track a company that he or she wishes to purchase shares in.

Fees for Companies with ARR

Based on the company website, these companies can be broken down into four main categories:

Cloud service companies are essential for most businesses that currently use the internet to operate. One could argue that in post-pandemic times, the internet business is the only business.

Gartner, who many consider to be the Yelp of the SaaS-world, takes it one step further. In 2019, they had predicted the cloud services market would increase to $266.4 billion in revenue in 2020. That was before the pandemic!

As stated earlier, the investors tend to be financial institutions and banks. However, instructions for investing are made available on the company website, so retail investors have the opportunity to purchase ARR as an asset class in much the same way as they would stocks and cryptocurrencies on a brokerage site.

This ease of use is opening up a new market of investors that would not be available during the traditional seed funding normally associated with startups.

One of the problems facing investors that Pipe has solved is their desire for monthly recurring revenue (MRR) rather than annual recurring revenue (ARR), because customers often do not want to have prepay annually. Pipe co-CEO Harry Hurst states, “The problem is that their customers want to pay for their subscriptions monthly or quarterly.”

This is such a problem that fledgling SaaS companies often have to discount their revenues as much as 40% in order to entice their investors to prepay annually.

Pipe’s platform has a MRR to ARR conversion feature that solves this problem, often within hours. In fact, Pipe’s software is fully integrated “into its customers’ accounting, billing, and subscription management systems”.

Funding for Pipe is still in its early stages. Regardless, their funding has been quite successful so far. During their venture round, over just a three week period, their funding quintupled from $50 million to a $250 million.

Notable investors of Pipe include:

While the yearly valuation data is not available, Pipe’s current valuation has hit $2 billion in March of this year. Their estimated annual revenue is $12.3 million per year.

Pipe co-founder Harry Hurst describes why it was so easy for Pipe to get such a high valuation at its last funding round. “We named our price because we didn’t need the money.”

Pipe has a profitable business model that accepts a small percentage of fees from each transaction on the platform. This model ensures that the company will continue to grow and scale as it adds more companies and more investors.

Pipe’s business model is profitable and scalable, which positions it well for future growth. However, as with any small business startup, there are risks.

The first risk is that Pipe may fail to attract users to its platform; if this happens, the company would be unable to create a network effect and would not reach the critical mass necessary to be successful. To mitigate this risk, Pipe has begun marketing itself on social media outlets and through outreach efforts to potential partners and investors.

The second risk is that Pipe may attract too many users; in this case, resources would be stretched too thin and customer service could suffer. To mitigate this risk, Pipe plans on building up its team and making sure that customer service remains a priority.

Finally, in order to ensure long-term success, Pipe should continually consider adding additional features to its platform while at the same time maintaining low costs in order to maximize profits.

TechCrunch has described Pipe as “pipe-ing hot”. According to TechCrunch, ARR on Pipe’s platform is “in excess of $1 billion and trending toward $2 billion”.

No so, with your SaaS! You miss a payment, and there is no collection process necessary. The SaaS or DaaS or iPaaS simply has to flip a switch and you are stuck in the 1980s! Good luck explaining that to your clients!

As Smith puts it, “A company will not pay the interest payment on its first-lien until after they pay their software maintenance or subscription fee”.

This reliability is key to Pipe’s profitability because reliability is execution.In his appearance on Secret Leaders, Pipe co-founder Harry Hurst put it like this, “Ideas need to be open-sourced. It’s the execution of the idea that’s proprietary.”

Conclusion: How Does Pipe Make Money?

Pipe allows business to get early access to capital from investors and gives them the option of receiving recurring revenue from customers instead of diluting their equity. It is a new asset class for a new economy.

The beauty of Pipe is that it allows companies with recurring revenue to access capital and use it to grow without having to dilute their ownership or take out loans. The platform is great because it helps companies scale faster, better, and larger.

It’s not just startups that can benefit from Pipe, either. Companies of all sizes can use Pipe as an alternative to traditional methods of funding. This includes large companies that need capital without giving up equity or taking out loans. As more industries begin to rely on subscription-based business models, the demand for Pipe will only increase.

This concludes our overview of the business model behind Pipe. We hope it helps you understand how the platform works and why it is so revolutionary for the future of business financing.