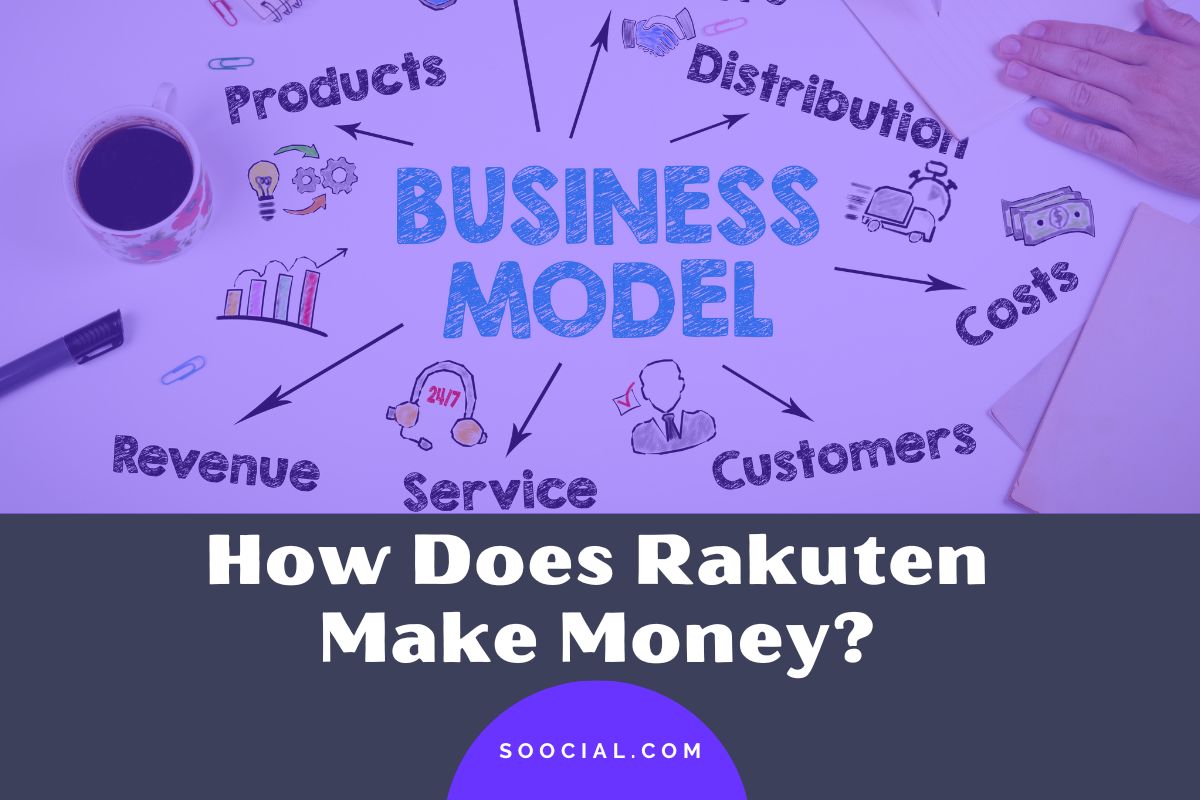 Rakuten is a shopping rewards company that gives consumers cash back when they shop at popular retailers. The company has a creative business model.

Rakuten.com was launched in 1997. It is a part of Rakuten Group, a publicly traded e-commerce and financial technology company headquartered in Japan. The Rakuten Group was founded by Hiroshi Mikitani.

While Rakuten.com used to run an eCommerce store at that same domain, The Rakuten Group closed that store in 2020. Currently, Rakuten only operates a shopping rewards service on that domain name. This service is something the Rakuten Group began offering after their 2014 acquisition of the online rebate site Ebates.com.[1]

The name Rakuten translates from Japanese to mean ‘optimism.’

What is Rakuten & How Does It Work?

Rakuten is a shopping rewards company that offers consumers cash back rewards when they make purchases on eCommerce sites. They offer Apple and Android apps and browser extensions for Chrome, Firefox, Safari, and Microsoft Edge.

Consumers download their app, install a browser extension, or visit Rakuten’s website. They can then browse through Rakuten’s 3,500 retail partners that offer cash back rewards via Rakuten when users shop at their online stores. Rakuten’s retail partners include many large consumer goods companies like Old Navy and Sephora and department stores like Walmart, Target, and Nordstrom.

When a customer clicks on an affiliate link on Rakuten’s site or app, they are then sent to a retail partner’s website where they shop and make a purchase as they normally would. Once they make a purchase, Rakuten receives an affiliate commission for referring the customer to the retailer. Then Rakuten passes a portion of the affiliate reward on to the customer. That can work out to anywhere between 1% and 40% cash back.

When customers use the Rakuten browser extension, they don’t even have to click on a link from Rakuten. They just navigate to the site they want to purchase from, and Rakuten automatically notifies them if there are any coupon codes available on that website.

That’s particularly helpful for customers since it can be hard to remember all 3,500 of Rakuten’s retail partners. Customers can also link their credit card to their Rakuten account so that they can get cashback in-store at participating retailers.

Rakuten helps over 17 million people earn cash back on their purchases. In total, Rakuten has paid out over $3.7 billion in cashback rewards across over 3 billion shopping trips.[2]

Membership is free, and Rakuten often offers rewards for new members to sign up and make their first purchase. This usually includes a $10 welcome bonus after they make a purchase of at least $25.

Customers get paid once a quarter. The money Is sent to them either via check or PayPal transfer. While the US site is Rakuten’s main site, Rakuten also runs cashback sites in other markets, including Canada, Japan, and France.

Rakuten.com’s business model is based on affiliate commissions that it passes onto its members. Many online retailers offer an affiliate commission when other websites register for their affiliate program and then send customers to their site. Rakuten is just taking advantage of this on a much larger scale.

With Rakuten, customers typically use a link or input a code that has Rakuten.com’s affiliate link in it. The retailer then credits Rakuten with whatever percentage of the sale they promised to pass along via their affiliate program. The amount that they pay will depend on the agreement Rakuten negotiated with them.

This is a common way website monetize their content. However, Rakuten does this on a much larger scale. Rather than use affiliate commissions to monetize a blog or media site, Rakuten’s business model focuses on creating a repository of affiliate links that customers can click on. They get their customers to do so by offering them a portion of the affiliate commission.

This makes sense for consumers since they are able to shop at major retailers and get a discount just for being a Rakuten member. Meanwhile, Rakuten is able to make a significant amount in affiliate commissions by earning commissions at scale.

The benefit of using Rakuten to purchase things for a customer over another company with a similar business model is that they have done considerable work to create partnerships with a large number of businesses. Having 3,500 partners makes it easy for them to attract new users.

They also offer the ability for customers to link their credit cards to Rakuten and get cashback rewards for in-store shopping. That’s something many other rewards sites don’t offer.

Companies benefit from partnering with Rakuten by having customers who are more likely to buy from their sites than their competitors since they’re able to get a discount on their purchases through Rakuten. Rakuten also offers them access to user data in order to engage Rakuten shoppers better with personalized offers.

Rakuten has a number of competitors. These include coupon sites like retailmenot.com and Swagbucks.

While it is unclear how much Rakuten makes off of Rakuten.com since the parent company doesn’t separate its revenue streams, it is likely that Rakuten.com is very profitable. The site likely doesn’t have significant expenses since they don’t have to maintain inventory or employ a large workforce. Their main expenses are development costs, staffing, and advertising.

How Does Rakuten Make Money?

Rakuten makes money in three different ways. These are affiliate commissions, commissions on in-store purchases, and the sale of customer data.

These commissions are paid when a Rakuten customer navigates to a partner site and buys something. Rakuten then gets a portion of the total cost of the sale.

These commissions are paid when a Rakuten customer navigates to a partner site and fills out a contact form or an application for a service. Once the company verifies the lead, Rakuten gets a fee for referring the lead to them.

These commissions are paid when a Rakuten customer navigates to a partner site. It doesn’t matter what the customer does once there, Rakuten is paid solely for sending customers to a partner’s site.

How much Rakuten makes from a partner varies considerably. For example, partners that sell very high-value items might pay a higher commission because it is harder to acquire a lead. Whereas popular retailers might pay a much lower commission since they have lower profit margins. Some partners also potentially pay more than one type of affiliate commission to Rakuten.

Rakuten offers customers cash back or discounts on in-store purchases. Customers simply use the credit card or bank account they’ve associated with Rakuten at the store to make a purchase, and that purchase gets credited to their account with the promised cash back.

Rakuten.com earns a commission for every qualifying purchase. It is unclear how much the company makes on these purchases.

One part of Rakuten’s business model is monetizing the data that they gather from their 17 million customers. The company aggregates and anonymizes this data and then sells it to marketing companies and other data brokers who then use it for market research, to design ad campaigns, or in other applications.

The data sold is of users’ transactions and purchases. Rakuten does not sell user personal data. It is unclear how much the company makes on these sales.

Rakuten.com is owned by Rakuten Group (TYO:4755), a publicly traded Japanese company. The Rakuten Group is traded on the Tokyo Stock Exchange. The company’s stock sold for 695 Yen in August 2022. That price values the company at $1.1 trillion.

Aside from Rakuten.com, Rakuten Group owns a number of different subsidiaries, including the messaging app Viber, the e-book distributor Kobo, and Rakuten Mobile, a mobile carrier in Japan. They also have a banking unit.

The cashback rewards service run on Rakuten.com was previously called Ebates.com. Rakuten Group bought the company for $1 billion in 2014.[3] This Rakuten Group subsidiary is likely worth much more now. Prior to being bought by Rakuten Group, Ebates.com raised $25 million in three funding rounds from one investor, Founders Circle Capital.[4]

Rakuten.com is likely profitable. While the cashback reward site’s parent company, Rakuten Group, does not release details on how much their subsidiaries make, Rakuten.com has a streamlined business model and consistent revenue stream.

That said, Rakuten.com’s parent company is currently not profitable. The Rakuten Group has seen losses in the tens and hundreds of billions of yen in 2019, 2020, and 2021.[6]

Rakuten is a huge company, with operations in many countries and a variety of different businesses. But despite its size and complexity, the business model is pretty simple.

It works by selling ads to retailers and then giving customers who buy from those retailers a percentage of their purchase back as cash or points. This gives people an incentive to shop with Rakuten’s partner retailers rather than directly with them. It also means that every time someone shops with one of these partners, they are generating revenue for Rakuten without having to pay any fees themselves.

Rakuten has proven itself as an innovator in the field of e-commerce, and it shows no signs of slowing down. As more people turn to online shopping, Rakuten will continue its mission of providing customers with the best possible shopping experience.

Well, that’s all for today! It’s been a pleasure to walk you through this article, and we hope you found it informative.

If you have any questions about how Rakuten makes money or if there’s anything else you’d like to know about their business practices, please don’t hesitate to reach out.

Thanks again for reading!

How Does Honey Make Money? Business Model of Honey

545 Shopping Slogans and Taglines To Help Sell Anything