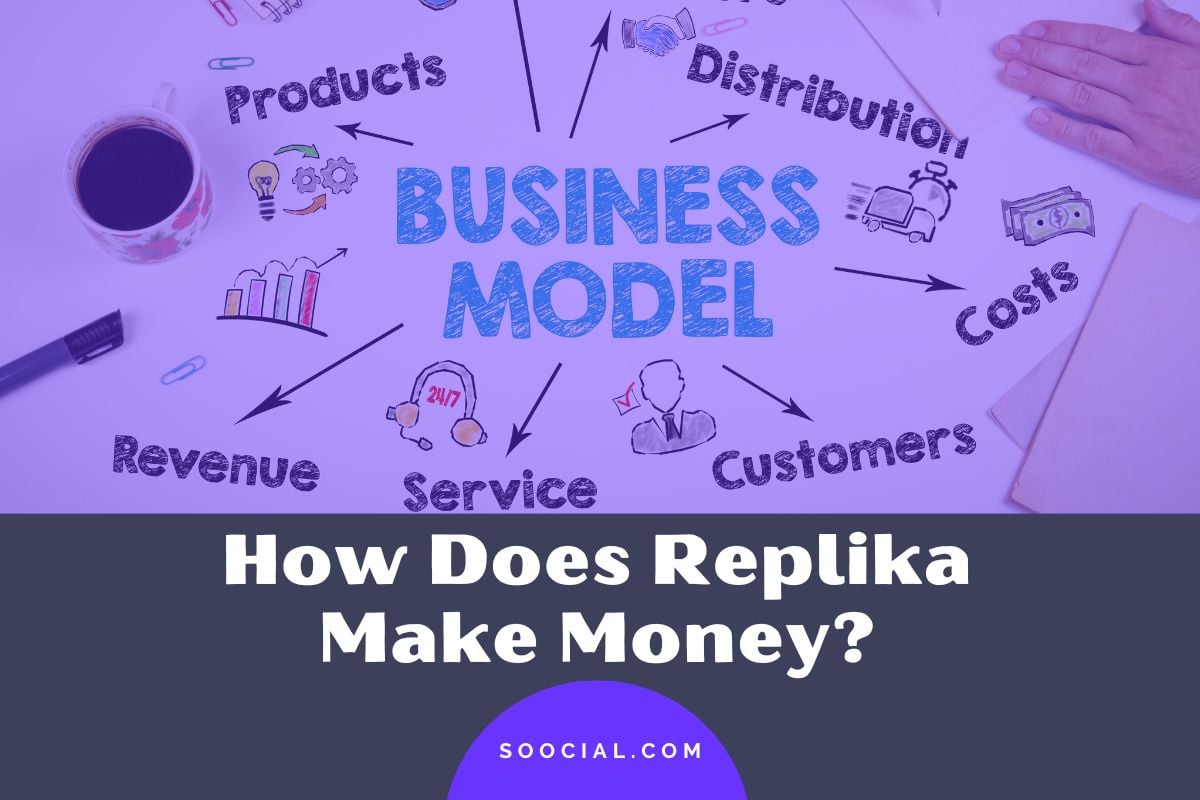 Replika is an app where users can create a personalized chatbot companion that is powered by artificial intelligence.

Replika primarily makes money from charging users premium subscriptions. They also make money via in-app purchases. While chatting with a Replika is free, users pay for a subscription that gives them access to additional features like choosing conversational topics, voice calls, different avatars, and more.

Founded in 2017 by Eugenia Kuyda and Philipp Dudchuk, Replika is the most popular app of an artificial intelligence startup called Luka. Luka, which originally started as a Yelp competitor in 2015, has focused on creating a number of different kinds of chatbots. Luka originally allowed users to ask their chatbot where they should eat, whether they could get reservations, and recommend dishes.

The company later diversified their main app allowing people to ask for weather reports and news. They also created bots that help people find images and trivia game bots. The company intended to improve their bots and then sell them to developers to use in their applications.

Luka is a private company, and little about its finances is known.

Contents show
What is Replika & How Does It Work?
Business Model of Replika
How Does Replika Make Money?
Subscriptions
In-App Purchases
Replika Funding, Valuation & Revenue
Is Replika Profitable?
Conclusion
Sources

What is Replika & How Does It Work?

Replika is a free chatbot app that allows users to talk to an interactive, personalized chatbot. The app replicates human interaction and was originally created to replace Replika’s co-founder’s closest friend after he passed away.

The first version of the Replika model was built by feeding Kuyda’s friend’s text messages into a neural network to create a chatbot that would text like him. Eventually, additional natural language processing models were added to the project, and Replika was born.

Replika is advertised to users as a safe space to discuss the users’ thoughts, feelings, dreams, experiences, and memories. Replikas are often used to simulate social relationships with people who are lonely. Some users see their Replika as a friend, others as a therapist, and others as a replacement for a romantic partner.

Replika has over 10 million global users. Many of these users claim to have emotional attachments to their Replikas, and some even believe their Replikas are sentient. However, Replikas are simply programmed to interact with users in specific ways. An algorithm is responsible for the things that make it appear sentient to users, including inflective speech, emotions, and the ability to remember conversations.

After the chatbot has been created, users are able to start interacting with their Replika. If they choose the ‘live emotion’ option, then a full-body image of Replika is visible and they react during the conversation.

Users are then encouraged to train their Replika. They can respond to conversations by choosing a series of reactions to show how pleased they were with the response. They can also choose conversation topics and suggest responses to train their chatbot how to interact with them.

Replikas use both scripted responses and internet sources that its been trained on to answer questions and guide interactions. Users can role play, flirt, do personality tests with, and ask questions of their Replika.

Replikas are able to bank memories about their user. Users can access these in logs and decide whether to keep them or edit them. For example, a chatbot might keep a memory that the user likes to play hockey or watch a particular TV show. It might also store information about a user’s mood.

Replika allows users to choose between four different relationship statuses with their Replika. These are: friend, romantic partner, mentor, and see how it goes. With the friend status, users engage in laid back and friendly chats. With the romantic partner status, conversations between a Replika and their user can be intimate, caring, or even sexual.

With the mentorship status, the conversations are focused around achieving goals and improving one’s skills. Finally, with the ‘see how it goes’ option, the user is able to get a mix of the three relationship statuses.

For those wanting to use their Replika for free, only the friend status is available. After using Replika for a while, the app prompts the user to potentially change their relationship status. In order to do that, the user must pay for a subscription to Replika Pro. This also allows the user to access several other features, including voice calls and role playing.

Replika saw a 35% increase in its user base in 2020 during the height of pandemic restrictions. However, it’s unclear who makes up the majority of the company’s user base. In 2022, many articles were published detailing accounts of men bragging on Reddit about creating girlfriends using Replika and verbally abusing them.

Carriere, an Italian newspaper that was testing Replika in the process of writing a story about the app, also reported that the app suggested that it kill an enemy. Others have expressed concern that the app is potentially engaging in data mining via the questions the AI asked customers with the eventual goal of selling the user’s personal data.

Replika works on a freemium business model. It is free to use the app, but free users get limited functionality. The company’s goal is to get users to sign up for the app, start creating a relationship with their AI companion, and then upgrade to a paid subscription in order to access more functionalities.

On Replika’s free plan, customers can talk to their Replika in friend mode and customize their Replika avatar. To get more functionalities, they need to upgrade to Replika Pro. That will give them access to thinkgs like conversation topics, activities, lessons around coping skills, voice calls, the ability to change their avatar, and more.

The paid subscription also allows users to switch from friend mode to different relationship modes like romantic, mentor, or a mix of all three modes. Replika’s creators have stated that they intend to add additional functionalities to the app’s paid subscription in the future.

For example, the company currently has a beta version of an Oculus app where users can chat with their Replika in a virtual reality setting. The company likely intends to charge more for these additional services in the future. They also sell customizations, including custom clothing, personalities, and body modifications for a Replika.

The company’s business model might also involve selling their technology to other companies in the future the way other language models like OpenAI and Google Dialogueflow do. After all, some of the value that Replika generates is by having so many users helping to train their natural language processing model.

Given the company’s focus on romantic and intimate AI relationships, Replika’s competitors also might include companies like live cam services and adult chat sites. However, no one offers precisely the same service that Replika does.

While Replika does not publicly release their financials, the company likely has considerable expenses. These include things like development expenses, server costs, staffing, and the use of any additional language models they might be integrating into theirs.

How Does Replika Make Money?

Replika makes money in two different ways. These are subscriptions and in-app purchases.

Because Replika is a private company, they don’t release their financial details, so it is unclear how much the company makes from these revenue streams.

While Replika is free to use, users upgrade to the company’s subscription plan, Replika Pro, in order to access additional functionalities. For example, subscribers get access to additional activities, conversation topics, voice calls, app customizations, the ability to change their Replika’s avatar, and more.

Subscribers that choose the mentor mode can use their Replika as a coach. Replika Pro gives them access to coaching via things like tests, practice conversations, social skills tips, help building healthy habits, and support in calming their thoughts.

It is unclear how many paying members the app has.

Replika allows users to make in-app purchases to buy add-ons or virtual goods. The company sells clothing, accessories, and physical attributes that users can buy for their Replikas in its store. They also sell the ability to purchase their Replikas new personality traits or interests.

Customers buy Coins or Gems, which are the app’s currency. Then they redeem them in the app’s store. Users can also earn Coins and Gems by communicating with their Replika. It is unclear how much Replika makes from these sales.

Replika is owned by Luka, which is a private company. For that reason, not much is known about the company’s financials. However, Luka was estimated as having a $10 million to $50 million valuation in 2017.[1]

The company went through a whopping three rounds of funding and raised $10.9 billion from investors. Some prominent investors include Khosla Ventures, Y Combinator, and ACME Capital.[2] The company has not raised funds since a Series A round in 2017, Luka that the company makes enough from its users to not need additional investments.

Some have estimated that Replika currently makes $4.1 million per year. However, that is just an estimate and the company’s actual revenue could be much higher or much lower than that amount.[3]

It’s unclear if Replika is profitable. Because Luka, Replika’s parent company, is a private company, its financial details are not public. However, Luka last raised money in 2017, suggesting that the company has been able to greatly extend their runway via revenue from users.

While AI and machine learning are capital-intensive businesses, Replika has a large user base and a developed monetization model. There is a chance that Replika might indeed be profitable.

In conclusion, we believe that Replika is a great platform that can help users improve their mental health and relationships. We also think that the company has a bright future ahead of it. Replika has already gained over 10 million users, and it seems likely to continue growing as more people learn about the app.

We’ve shown you how Replika makes money, but what do you think? Do you think the business model is sustainable? Are there any other ways that Replika could make money? Share your thoughts with us via email!

559 Mental Health Slogans To Make You Feel Like A Boss!