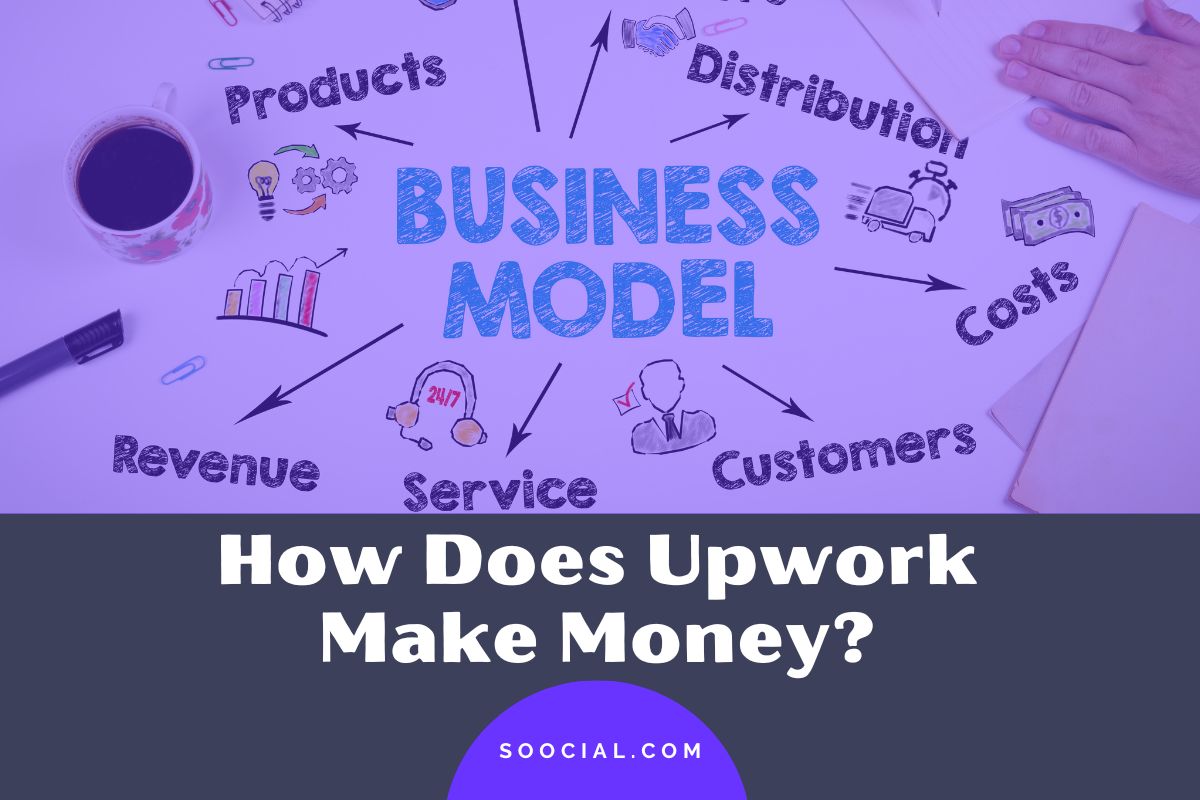 Upwork is one of the most popular online job boards connecting freelancers with companies. The company’s revenue streams include fees from businesses and freelancers to use their platform, but they also have some other creative monetization strategies.

Upwork primarily makes money via transaction fees to companies who use their platform. They also make money by charging freelancers fees on their payments from clients.

The goal of the merger was to become the market leader for freelance job postings. At the time, both companies were experiencing competition from freelance.com. Initially, the companies continued to operate their own websites. But, in 2015, executives decided to sunset the individual brands and operate under the name Upwork.[3]

Elance was founded by Beerud Sheth and Srini Anumolu, and oDesk was founded by Odysseas Tsatalos and Stratis Karamaniakis. Upwork (UPWK) went public in 2018 and is currently listed on the NASDAQ stock exchange.

What is Upwork & How Does It Work?

Upwork is a global freelance job listing platform. It works by having businesses post freelance jobs and freelancers, who have profiles on Upwork, apply to do the work. This is slightly different than other popular freelancer platforms. For example, on platforms like Fiverr, freelancers are the ones who post their portfolios, and businesses connect with those they want to hire.

When a freelancer applies for a freelance job, they send information about their qualifications and bid how much they are willing to do the work for. The company that posted the job then looks through all the applications, reads through freelancers’ profiles, and decides which to hire.

Next, the company sends the freelancer a contract via Upwork with the details of the work, such as the pay rate, hours, or deadline. Upwork allows companies and freelancers to connect in a variety of ways. For example, they can send chat messages to each other.

Upwork also offers a time tracker to businesses. They can record the freelancer’s keystrokes, take screenshots, and send them to the business.

Once the work is complete, the freelancer sends an invoice to the company through the platform. At that point, the company sends the agreed upon payment to the freelancer. Upwork handles all of this and takes a percentage of the payment from the freelancer and charges the business a fee on top of their payment.

Upwork attracts a wide variety of freelancers and work opportunities. There are a large number of writers, designers, and developers on the platform. But there are also a significant number of customer service, accounting, and administrative workers. In total, there are over 90 categories of freelancers on Upwork.[4]

Upwork attracts freelancers from around the world with various levels of skill and experience. The company boasts 145,500 core clients on the platform who spend at least $5,000 a year [5] and 833,000 active freelancers.[6]

Upwork’s business model focused on helping companies and freelancers find each other – and making money off their interactions. By creating a platform where there are a large number of freelance opportunities and freelancers, Upwork has become a central place where businesses go to get help with small tasks.

In the past, it could be difficult to find a freelancer to do a small job. However, freelance job sites make finding someone simpler. With Upwork, companies can create one posting and get freelancer applications from around the world. This expands most companies’ reach beyond the local classified boards they might have posted on before.

While many job boards charge to post a job, Upwork’s business model is a little different. Posting a job is free. However, companies pay transaction fees on payments they send to freelancers. Upwork also charges transaction fees to the freelancer for payments processed by the platform.

That means that many freelancers rush through their assigned work or aren’t as qualified as the company expects them to be. This increases the likelihood that companies will get frustrated by the quality of the work and stop using Upwork.

In 2019, the company was seeing a growing number of freelancers and a dwindling number of jobs being posted on the site.[7] From one month to the next, job opportunities went down by 31%.

Their current goal is to attract larger companies to use Upwork on an ongoing basis rather than attracting small companies who use the platform occasionally. That means the company has been reducing its talent pool and purging freelancers with low ratings from its platform.

Upwork is trying to cash in on the growing desire for a contingent workforce in larger companies who are hesitant to hire permanent positions for short-term projects. Upwork aims to be the solution for large Fortune 500 companies to get ongoing support.

Whether that strategy will work for a company that has become associated with low pay and low-quality work, remains to be seen. It might have to invest in recruiting better freelance talent if that strategy is going to be successful.

Another challenge with Upwork’s monetization strategy is that it’s based off companies continuing to work with freelancers on their platform. However, if a particular freelancer and company wants to work together on an ongoing basis, they can simply exchange their personal contact details and connect offline to reduce their costs.

In situations like that, Upwork then loses out on the transaction fees it would have collected from the ongoing relationship.

Upwork has a number of competitors. These include other freelance job boards like Fiverr and Freelance.com. But it also includes higher end temporary staffing platforms, many of which are specialized to very specific industries or professions like programmers. Upwork also provides non-vetted freelancers.

Companies like TopTal and CloudDevs are competing for similar business and put their freelancers through exhaustive tests and vetting before they add them to their platform, giving companies more confidence in the temporary talent that they’re hiring.

Upwork has significant marketing, research, administrative and other expenses. In 2021, Upwork brought in $505 million in revenue but still saw a loss of $56 million after expenses. That’s up from a loss of just $22 million in 2020 against revenue of $373 million.[9]

How Does Upwork Make Money?

The company does not break down the source of their revenue, so it is unclear how much each of these revenue sources added to their overall revenue.

Upwork used to charge subscription fees to businesses just to gain access to its platform and post jobs. However, they have recently done away with subscription fees and moved to a transaction fee model for companies.

The Client Marketplace Plan is a combination of Upwork’s former Upwork Basic and Upwork Plus plans.[10] It provides companies with premium features that used to be only accessible to Plus subscribers. In exchange, they charge a fixed transaction fee of 5% on all payments or 3% for customers in the US who pay with their checking account.

The plan allows companies to access all talent tiers, invite up to 30 freelancers to apply for a job, do advanced freelancer searches, and get codes for organizing work on hourly contracts.

Upwork also offers the Upwork Enterprise plan for large companies who want a flexible talent pool. Upwork claims companies like Microsoft and Airbnb are users.[11] This plan allows companies to add things like IP-ownership agreements to their onboarding or cost center tracking to ongoing work relationships. It also provides access to enhanced support and the ability to integrate the Upwork API into a company’s existing systems.

Upwork offers the ability to set up an ongoing payroll for workers and insure freelancer engagements. The company also offers these companies talent sourcing help. Upwork Enterprise has custom pricing on the plan that Upwork doesn’t explain on its site.

Each time a freelancer works with a new company, they have to meet these lifetime earning targets in order to reduce the percentage Upwork charges them on their payments.

Upwork charges companies a variety of other additional fees for services. For example, they charge their enterprise clients for insurance around their freelancer relationships.

Upwork does not delineate all these additional sources of revenue or how much they generate from them.

Prior to going public, the company went through twelve successful funding rounds and raised a total of $168.8 million. Well-known Upwork investors include EquityZen and Benchmark.[14]

As the company is in the middle of repositioning their platform to attract larger and better paying companies, there is hope that they will be profitable in the future.

They have a network of freelancers who provide services to clients, and they handle the transaction between them. This allows Upwork to keep a portion of the revenue from those transactions for itself, and it also ensures that both sides are protected from fraud and other problems.

But there are some drawbacks to this model as well. For one thing, Upwork is responsible for vetting all of its freelancers—which means they need to be able to do background checks on each one in order to make sure they’re trustworthy enough to be hired by clients. That can take time and resources that Upwork might not be able to afford if they’re trying to stay competitive with other platforms like Fiverr or Freelancer (which also employ similar business models).

There are pros and cons of this business model, but in general, it’s one that is helping to connect millions of people worldwide while providing quality work at a fraction of the cost.

Whether you are thinking about starting your own business or just looking for an opportunity to make some extra money, check out Upwork—you may be surprised by what you find!

How Does Webflow Make Money? Business Model of Webflow