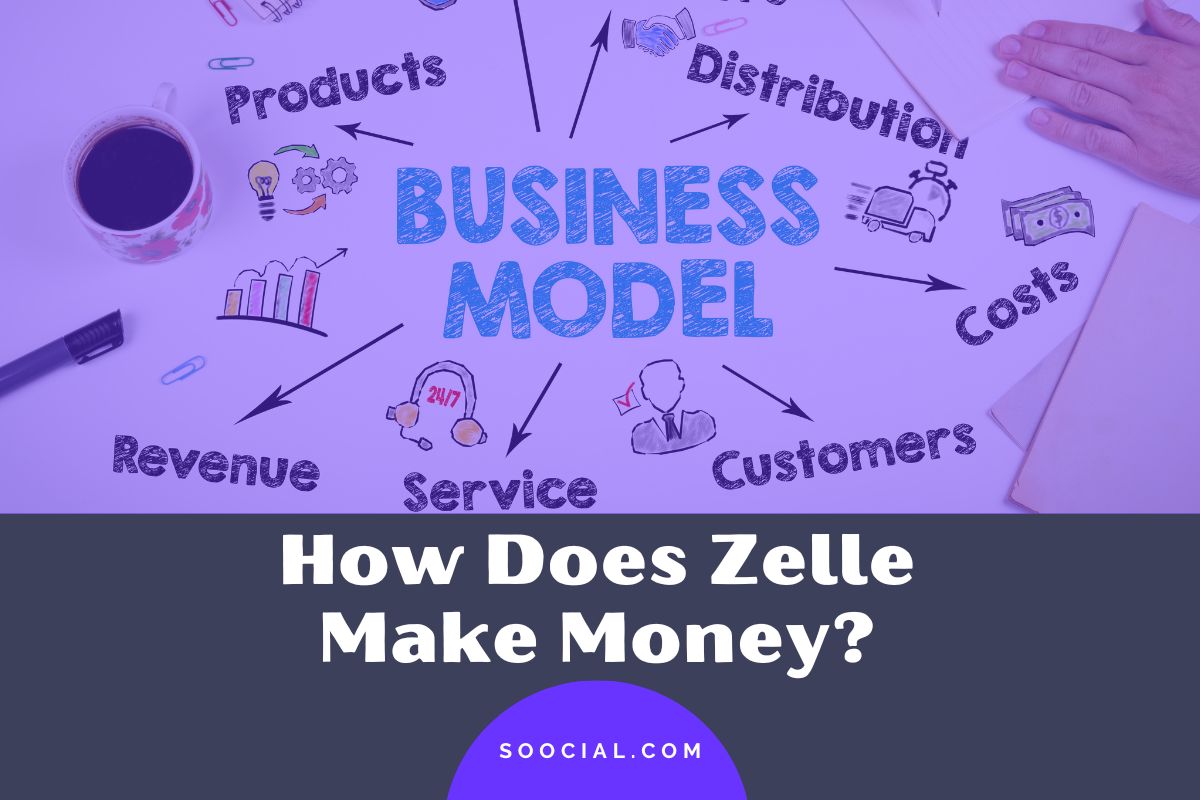 Zelle is a peer-to-peer payments network where users send funds from their bank account to someone else’s account. The company makes money in only one way.

Zelle makes money from per transaction fees paid by participating banks. Zelle does not currently generate revenue directly from consumers for any of its services.

The company was started and is funded by a consortium of banks. They wanted to create a peer-to-peer payment network that would allow individuals to send money from their bank accounts to the bank accounts of their family or friends.

Founded in 2011, Zelle is a brand owned by a company called Early Warning Services LLC. It’s a private company whose shares are owned exclusively by banks. These include Bank of America, Truist, Capital One, JPMorgan Chase, PNC Bank, U.S. Bank, and Wells Fargo.

Zelle was originally called clearXchange and owned solely by Bank of America, JPMorgan Chase, and Wells Fargo. When other banks joined the network in 2016, it was sold to Early Warning Services and then rebranded as Zelle in 2017.

Contents show
What is Zelle & How Does It Work?
Business Model of Zelle
How Does Zelle Make Money?
Participating Bank Fees
Zelle Funding, Valuation & Revenue
Is Zelle Profitable?
Conclusion
Sources

What is Zelle & How Does It Work?

Zelle is a peer-to-peer payments network aimed at consumers. While it was created as a separate app, consumers who bank at participating institutions can make Zelle payments directly from their bank’s mobile app.

Typically, Zelle connects with both the recipient’s and the sender’s existing bank accounts and money is automatically removed and deposited directly into the parties’ accounts. However, only those who bank at a participating institution are able to sign up for Zelle deposits directly to their accounts. Anyone else can still download and use the Zelle app to accept funds.

Aside from sending payments, Zelle users can request payments from others or ask contacts to split the cost of a bill. Financial institutions can place limits on how much can be transferred via their customers’ Zelle accounts. These limits vary from bank to bank and can include daily, weekly, and monthly limits.

Payments made via Zelle can’t be canceled and are sent immediately. What’s more, individual banks decide how much Zelle transfers cost. Some banks allow their customers to send money via Zelle for free, whereas others charge for it.

Zelle has a unique business model for a payments network, in that, it’s not actually focused on earning revenue directly from users. Instead, Zelle is meant to provide a consumer peer-to-peer transfer service to the customers of the banks that own Zelle’s holding company and to the customers of any other participating banks.

Zelle is legacy financial services companies’ answer to the fintech peer-to-peer payment networks that were taking away revenue and services from established banks in 2011 when clearXchange was founded.

Banks decided to start their own payments network since consumers were transferring money to external accounts like PayPal and Venmo and then conducting a significant portion of their financial transactions on those apps. By offering an in-house solution, banks prevent many customers from using those services and are able to generate revenue on those transactions.

That keeps more of their customers’ money in their accounts and allows the banks to expand their payment options. Tactically, that makes it harder for one of their fintech competitors to introduce a hybrid payment network and bank account that could eat significantly into banks’ market share.

That also made solving the technology challenge easier. If each bank had created their own peer-to-peer payments system, the banks would have had to figure out a way to make all of them work together.

Zelle has over 924 participating banks and credit unions in its network.[1] In the first half of 2020, it facilitated $133 billion in payments.[2]

So, how is Zelle funded? The banks that started it invested significantly in building its infrastructure and services. As new owners were added, it is likely those banks also invested heavily in funding the company’s operations and technology development.

Apart from the company’s owners, it also has participating institutions. Banks and credit unions that participate in Zelle pay fees to do so. This allows Zelle to continue to operate, expand, and refine its technology. It also likely makes income for the banks that own Zelle.

Zelle doesn’t directly charge anyone sending any transfer transaction fees. While some banks offer Zelle transfers to their customers free of charge, others charge their customers for each transfer. Participating institutions who charge fees likely generate a considerable amount of revenue by using Zelle.

Zelle sends transfers over the Automated Clearing House (ACH) network via the banks themselves. Because of that, you cannot send international transfers using Zelle.

Zelle has a number of competitors in the form of fintech payment technology companies like Venmo, PayPal, Cash App, and Apple Cash. However, none of their have the same business model. Most competitors allow consumers to send money to businesses as a rule, rather than as an exception. Some, like PayPal, also allow international payments.

Zelle likely has considerable staffing, technology, and development costs but as it is a privately held company, Zelle’s expenses and revenue are not public.

While Zelle has been widely adopted, many watchdogs are critical of the service since it has become synonymous with high profile fraud incidents. To protect customers, many banks are starting to use secondary confirmation methods and putting limits on transfers to newly created accounts.[3]

How Does Zelle Make Money?

Zelle does not directly make money off its payments. Instead, Zelle allows banks the use of its platform, and banks can choose to charge their customers for the transactions. Instead, Zelle makes money from fees and contributions from participating banks.

While Zelle doesn’t directly charge transaction fees to those using its app, the company needs to generate income to continue to improve, maintain, and run its technology platform.

The company is owned by a number of big banks and has almost a thousand participating banks. These institutions pay fees to cover Zelle’s operating and technology development costs.

As Zelle is a private company, it does not disclose how much it charges participating banks or how much money it collects in total. However, some industry articles have suggested that Zelle bills participating institutions on a per-transaction basis and charges between $0.50 and $0.75 per transaction.[4]

Zelle is currently a private company, and so few details about its finances are public. It is not clear how much the company makes on an annual basis or how much was originally invested in the service.

However, it is known that Zelle’s parent Company Early Warning Services is owned by a number of banks, including Bank of America, Truist, Capital One, JPMorgan Chase, PNC Bank, U.S. Bank, and Wells Fargo. These banks were the company’s original investors. How much each owns of Zelle or how much they each invested isn’t known.

It also isn’t clear how much the company is valued at. To get an idea of how much it could be worth, we could look at the value of similar payment networks. However, many of Zelle’s competitors are now part of much larger companies and don’t clearly differentiate how much revenue their subsidiaries generate.

In 2021, Zelle processed 1.8 billion payments for a total of $490 billion in payments that flowed through its network. In contrast, in 2021, Venmo processed just $230 billion in payments. Venmo was acquired by PayPal in 2013 for $800 million. Since then, it’s not clear how much Venmo might be valued at independently of PayPal.

Square’s Cash App, meanwhile, processed just $167 billion in payments in 2021 and made $12.3 billion in revenue that way. However, Cash App now does more than just send transfers. It also allows you to buy and sell stock, use a Cash App card, and buy and sell cryptocurrency. In addition, it’s believed that 76% of that revenue came from Bitcoin in 2021. The company also operates their Cash App in the UK. For those reasons, it’s unclear how much the company generated from its peer-to-peer transfer service alone.

While it is hard to make a direct comparison, similar companies suggest Zelle’s valuation could be very high.

Zelle could also be making a significant amount of revenue for the banks that own it. After all, if the company charges $0.50 to $0.75 per transaction and facilitates 1.8 billion transactions per year, that equates to between $1 billion and $1.35 billion in revenue.

Zelle is likely profitable. As a private company, Zelle does not release its financial statements. However, the company has over 900 participating banks in its network and is one of the largest peer-to-peer payment processors in the US. If the company is indeed charging $0.50 to $0.75 per transaction, then it is making a significant amount of revenue.

As you can see, Zelle is a very innovative way for people to send money. The business model is based on a payment network, which allows users to send money directly to other users in minutes without any fees. The network is designed to be easy to use and secure, so that you can trust your funds are safe when they’re on the platform.

The company has been able to grow rapidly by offering a service that people want and need, while keeping costs low. It has been able to do this by leveraging its existing relationships with financial institutions and payment processors in order to offer an easy and convenient way for people to send money directly from one person to another without having to go through an intermediary such as PayPal or Venmo.

Zelle has come a long way since its inception in 2016, and it’s only going to get better as more people adopt it as their preferred method of sending money. We’ll continue to monitor the growth of Zelle as well as other platforms like it so that we can provide our readers with the most up-to-date information possible.

Thank you for reading!

How Does Venmo Make Money? Business Model of Venmo

How Does Wise Make Money? Business Model of Wise

How Does PayPal Make Money? Business Model of PayPal