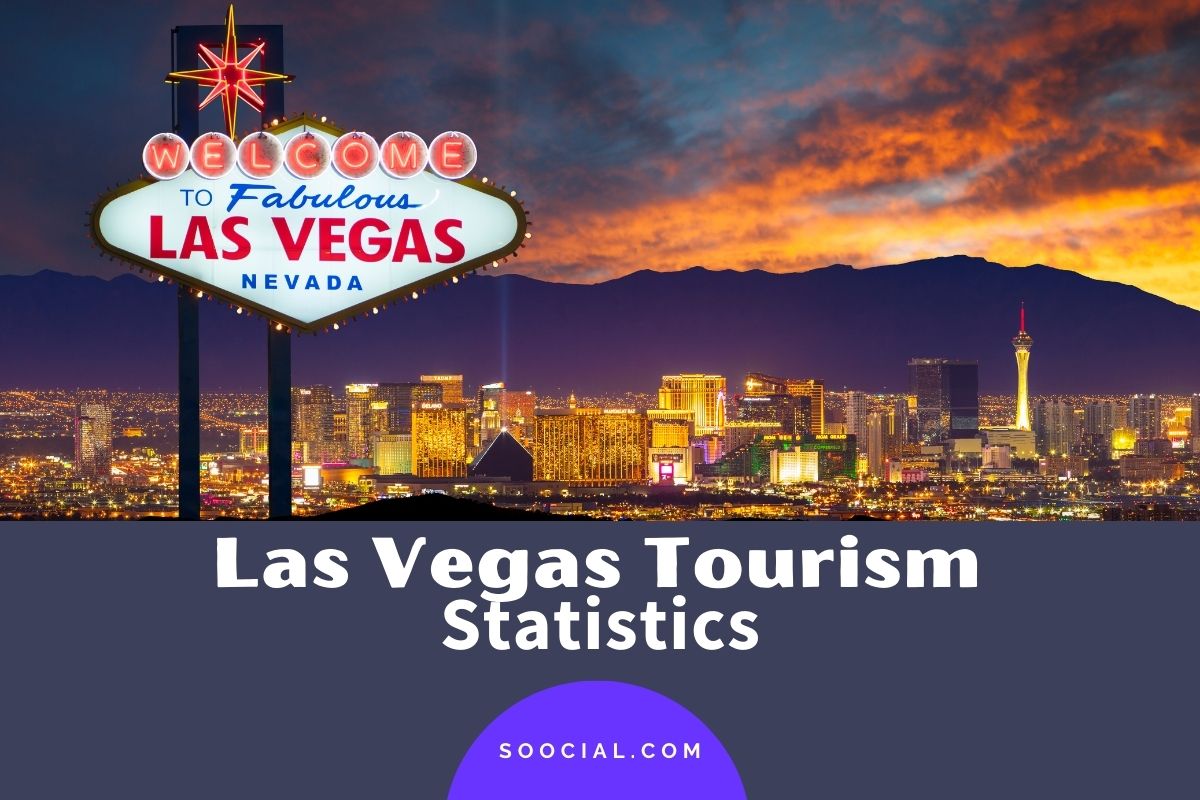 As one of the most popular travel destinations in the world, Las Vegas has been consistently attracting millions of visitors from all around the globe, and for various reasons! Sin City boasts a variety of places promising unforgettable entertainment, exceptional dining, and luxurious shopping.

As tourism is one of the most dominant industries in Vegas, COVID-19 brought about a considerable shift in visitor count and behavior. The below figures outline the latest state of Las Vegas tourism and its post-pandemic recovery. Read on!

Figures revealing the latest visitor count, demographics, and origin of travel, as well as emerging behaviors among post-pandemic travelers.

The first time Las Vegas visitor volume exceeded the 40 million benchmark was in 2014 when Sin City recorded a whopping 41,126,512 visits.

The visitor volume floated around 42 million during the following years, with the specific figures by year as follows:

To further put this figure into perspective, the last time that the Las Vegas visitor volume was under 20 million was in 1989.

4. In mid-2021, 68% of Las Vegas visitors said they were very satisfied with their trip there.

A further 37% said they were somewhat satisfied with their trip to Vegas, while a mere 4% stated they were dissatisfied. Comparing these figures to pre-pandemic ones, however, paints an entirely different picture.

In 2019, a staggering 94% of Las Vegas visitors were satisfied with their trip there. A mere 5% said they were slightly satisfied, while only 1% were dissatisfied.

Interestingly, the first-time to repeat visitors ratio was the same in 2019.

Among emerging travel behaviors, however, 41% of visitors in 2021 said their Las Vegas trip was their first overnight one since the pandemic quarantine. A further 22% said they worked during their trip to Vegas in 2021.

6. 58% of Las Vegas visitors in 2021 came to the city via ground transportation.

The portion of those who visited the city via air travel stands at 42%, a figure that hasn’t been recorded since 2014. The air travelers’ portion of visitors recorded a 7 percentage point decline since 2019.

Among those who used ground transport, the average number of people per vehicle stood at 2.9.

As Vegas is dubbed the Gambling Capital of the World, the above figure comes as no surprise when observing visitors’ favorite activity in the city, if not the main reason for traveling there.

While there are no figures of statistical relevance for 2020, this is still an 8 percentage point drop from 2019, when a whopping 81% of visitors who came to Vegas gambled there.

The only time this figure was surpassed was a decade earlier, in 2009 when the gambling portion of visitors peaked at 83%.

The most dominant income demographic was the same in 2019, even though it then accounted for 29% of the total visitor count.

The rest of the travelers were single, divorced, or widowed. The married portion of Las Vegas visitors recorded a near 33% increase since 2019 when it stood at a whopping 73%.

11. 2021 recorded fewer visitors with a college degree or higher.

At 51%, the most dominant education demographic among Las Vegas travelers in 2019 consisted of those with a college degree or higher.

In 2021, however, the portion of travelers with the same education level equaled the one of those with some college/trade school, at 38% each. At 24%, the least dominant education demographic consisted of those with a high school diploma or less.

While this is a staggering figure on its own, it’s actually a substantial drop from the 77% recorded in 2019.

A further 20% were African American, followed by Latino/Hispanic visitors at 16%. Asian visitors accounted for 5%, while 3% of visitors to Vegas belonged to other ethnicities.

The above figure points to a staggering drop of 13 percentage points when compared to the pre-pandemic portion recorded in 2019.

When observing domestic traveler stats, at 63%, the largest portion came from Western states, with California, Arizona, and Utah being the most dominant states, at 28%, 12%, and 8%, respectively.

Those coming from Southern states accounted for 16% of Vegas visitors, followed by travelers from Central states at 13%. At 8%, the smallest portion of travelers to Vegas came from the US Northeast.

Figures revealing the latest recorded state of room inventories, occupancy rates, number of people per room, as well as the most popular accommodation areas in the city.

Interestingly, this figure peaked at 150,535 in October, which is also the month that recorded the highest number of visitors in Las Vegas. January and February recorded the lowest available room inventory figures, at 145,308 each.

While room inventory figures are important when considering the state of the tourism sector in a certain location, they’re not directly proportional to the overall visitor volume. T

he earliest Vegas room inventory records point to 1970 as the year with the lowest average available room inventory rate of 25,430. In the same year, however, visitor volume reached 6,787,650.

To put things into perspective, in 2016—the year which recorded the highest number of visitors—room inventory stood at 149,339, which is less than 1% below the peak in 2013. This signals that the number of accommodation facilities grows at a faster pace than the number of Las Vegas visitors.

This figure comes as no surprise since, as previously stated, October was the month that recorded the highest number of visitors in Las Vegas. No other month in 2021 has surpassed the 80% benchmark, and only July and November came close, with occupancy rates of 79.4% and 77.6%, respectively.

As expected when observing the total visitor count, January and February were the months with the lowest occupancy rates, at respective 31.6% and 42.0%.

Occupancy rate is another aspect that clearly demonstrates the effect of the COVID pandemic on the Las Vegas tourism industry. The occupancy rate in 2019 stood at 88.9% and was followed by a massive drop to 42.1%—which is also the lowest-to-date since 1970—recording a 58% increase to 66.5% in 2021.

At 90.4%, October was the only other month where weekend occupancy rates exceeded 90%. Midweek occupancy was highest in October as well, at 77.5%.

On the other hand, January recorded the lowest figures in both midweek and weekend occupancy rates, which stood at 48.3% and 22.5%, respectively.

When observing the yearly averages, weekend occupancy rates outperformed midweek ones by 36%.

2021’s average Strip occupancy rate was 67.7%, while the same figure Downtown stood at 56.6%. Both locations recorded their peak and minimum occupancy rates in the same months. The year-high occupancy rates were recorded in October at 83.4% for the Strip and 73.6% Downtown.

On the other end of the scale, January was the month with the lowest occupancy rates, at respective 31.0% and 25.6% for the Strip and Downtown.

Even though the occupancy rate was higher on the Strip, 2021 recorded a substantial hike in the number of visitors that explored the Downtown area when compared to previous years.

This is the highest recorded figure since 2016 when the average number of people per room stood at 2.0.

This points to a staggering 440% increase since 2019 when a mere 5% of visitors to Las Vegas traveled to the city with someone under 21.

The latest figures detail the city’s revenue from various sources such as accommodation facilities and gaming, as well as average traveler budgets and spending.

Revenue Per Available Room (RevPAR) noted substantial differences between the Strip and Downtown. Namely, Strip RevPAR stood at an above-average $98, while Downtown RevPAR stood at $53.5.

Revenue Per Available Room peaked in October for both locations, at $154 for the Strip and $81.6 Downtown. January was yet again the poorest-performing month, when Strip RevPAR stood at $29.92, while the same figure Downtown was $16.37.

Another area proving the devastating effect of COVID-19 on the Las Vegas tourism industry is the Revenue Per Available Room.

This points to an all-time high since 2016 when the respective figure stood at $619.

The second-largest portion of travelers’ budgets went into shopping ($312 per visitor), while lodging ranked third at $145. The average local transportation cost per visitor stood at $131 while $59 per visitor was spent on sightseeing.

The two smallest portions of visitors’ budgets went to shows/entertainment and parking, at $12 and $10, respectively. While the exact figures for 2019 and earlier differ, the proportions of what they were spent on are the same.

Even though various aspects of the industry faced a notable decline after COVID-19 lockdowns, the above stats reveal that Las Vegas tourism is steadily recovering.

Furthermore, the industry recorded some all-time high figures on several fronts such as visitor diversity as well as spending in different sectors, and therefore revenue.

Regardless of whether the current situation is the new normal or not, one thing’s for sure – Vegas remains a top travel destination worldwide, showing no signs of slowing down!

Well, that’s it! We hope this post has given you a better sense of the tourism industry in Las Vegas and how it’s changing.

Let us know if there’s anything else you’d like to read about, and please share this with your friends so they can enjoy it as well!

Thanks for reading, and as always…Happy travels!