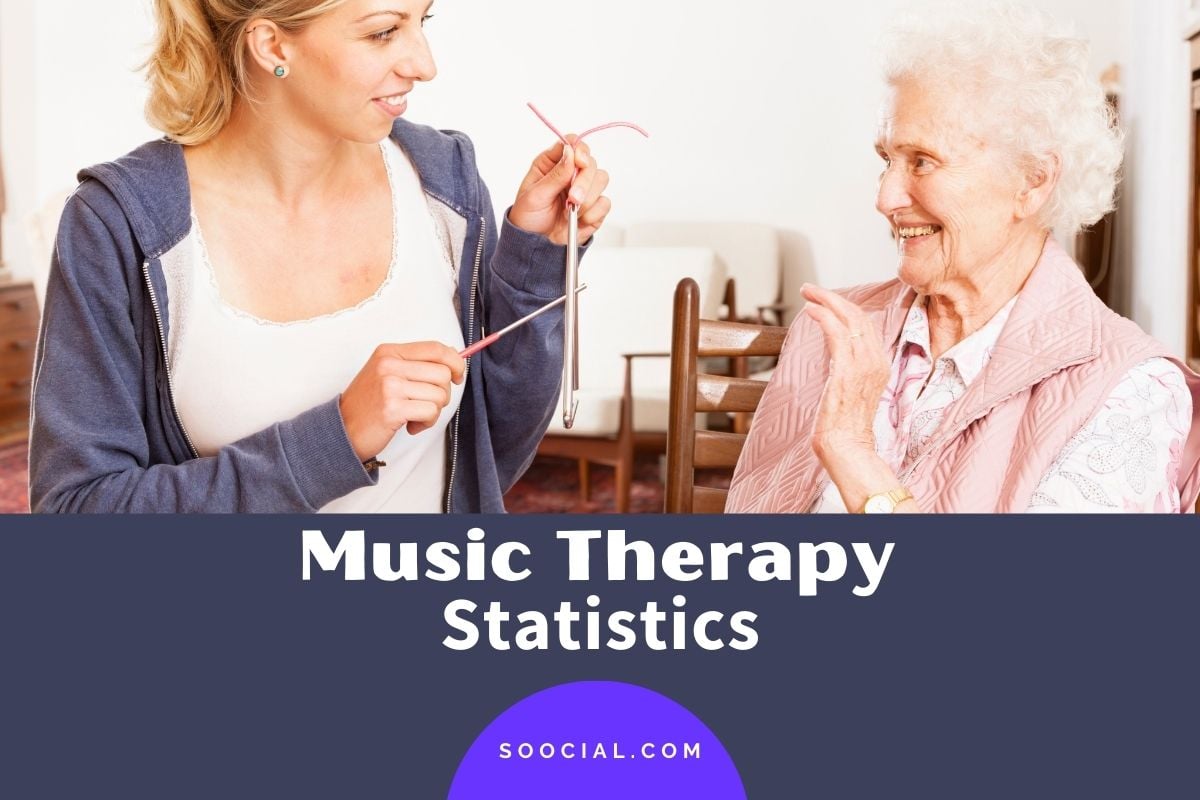 Music is a powerful tool that can help people in many ways. Music therapy has been around for thousands of years, and its use has expanded over time. Music therapists work with people of all ages who are suffering from physical or mental illness, trauma, grief, or developmental disabilities.

Music is everywhere! We sing to music in the shower, we note down brilliant ideas for songs when we’re sitting at a red traffic light, and music can even boast the likes of Mozart and Beethoven to its success story. That’s why it’s not surprising that music therapy is such a large industry — with plenty of facts and figures to prove it.

If you want to learn more about how music therapy can improve your life and the lives of those around you, read on!

This figure continues to rise each year due to various factors, including several research studies supporting the effectiveness of music therapy, word of mouth, and coverage by the media. Music therapy originated in the 1940s; back then, music was used to provide comfort to soldiers experiencing physical and emotional traumas.

Nordoff-Robbins approaches music therapy based on the credence that each individual is sensitive to much at certain levels, which can be used for their personal growth. In this type of therapy, clients aren’t just passive. They actively participate with their therapist in making music.

In a survey of 42 children aged 3 to 11, over two-thirds of healthcare providers in the music-listening group claimed that administering their patient’s IV was easy and less painful.

Ths study found a correlation between music and stress and found that music can help comfort pediatric patients in emergency rooms.

The patients who were exposed to music were relatively less stressed about having an IV inserted. They were also in less pain than the group of patients who didn’t listen to music. Among the non-music-listening group, only 38% of healthcare providers reported that IV administration was easy.

4. A new study has found that music therapy can be an effective treatment for depression.

We’ve all heard the saying “music soothes the savage beast,” but does it really?

The use of music therapy is a great way for patients with depression to get the help that they need. This type of treatment has been shown in various studies and clinical trials not only to improve depression symptoms but also to reduce length or recurrence rates.

In a recent study, researchers uncovered that patients who experienced music therapy showed a drastic improvement in depression symptoms over a 3-month period. 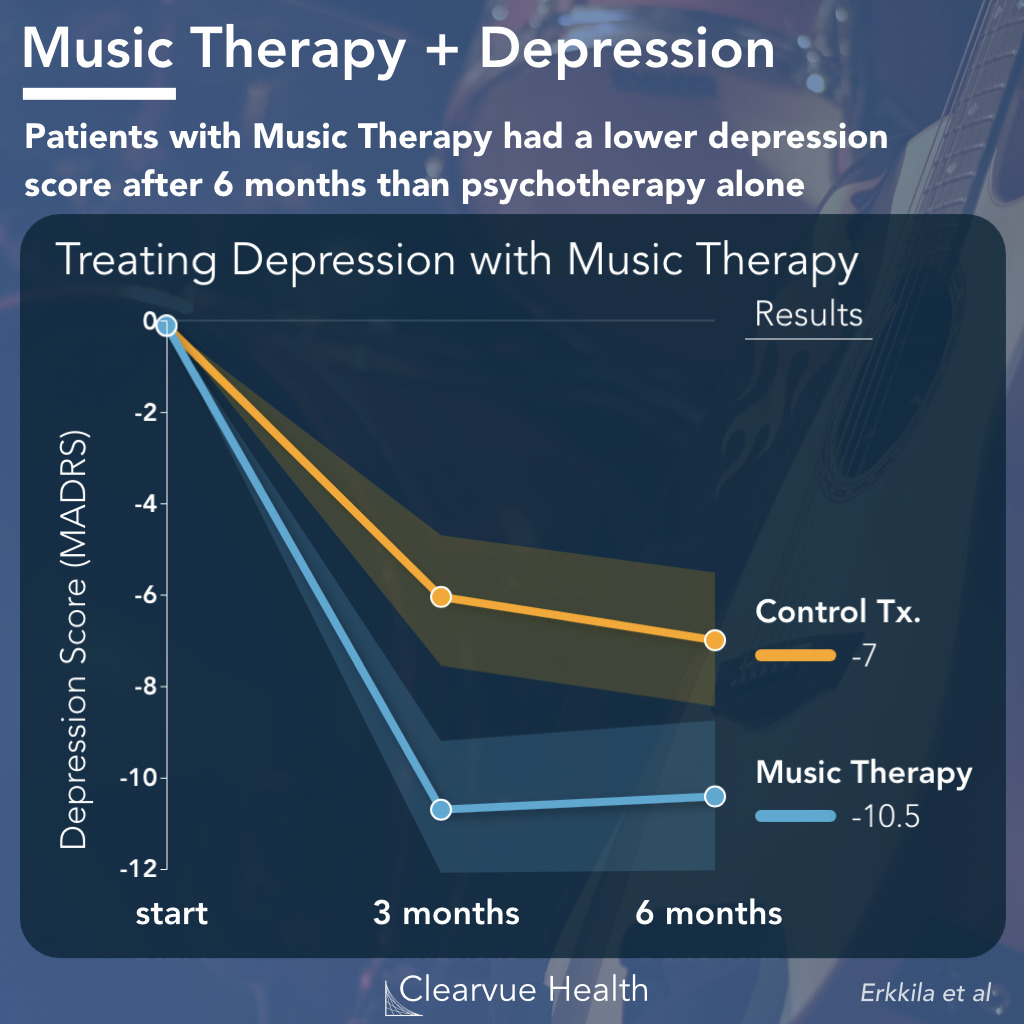 5. There are currently more than 26,000 music therapists in the United States.

Nearly 50% of music therapists employed in the United States work in companies with 100 to 1,000 employees. The job has had a positive outlook since 2004, and vacancies in this job have increased by a little over 30% since then in the United States.

6. There are more female music therapists in the United States than males.

According to a database of 30 million profiles, there are an estimated 78% of female music therapists in the United States compared to only 22% of men.

However, despite women dominating the industry, they make less than what a man makes in this career. For every $1 that a man earns, a woman only earns 95 cents.

There are more White music therapists than any other race in the United States.

Comparatively, roughly 13.3% of music therapists are Black or African American, 11% are Latino or Hispanic, 6.7% are Asian, 0.9% are Alaska Native or American Indian, and the rest are of unknown race.

Since 2010, there have predominantly been White music therapists than any other race.

8. At $49,360 per year, African American music therapists receive the lowest average salary in the United States.

The evident pay disparity between different races in the United States is not new knowledge. However, it can still be disheartening to see it in the music therapy industry. On average, African American music therapists receive only $49,360 per year, while their counterparts receive more than $53,000 per year.

9. In the United States, 74% of music therapists have a Bachelor’s degree.

Music therapists with a Bachelor’s degree make up the majority of the workforce. Comparatively, 19% have a Master’s degree, 4% have an associate degree, 1% only have a high school diploma, and the remaining 2% have degrees in other fields.

10. Nearly half of music therapists work in the healthcare industry.

With the numerous benefits of music therapy in physical and mental ailments, including Alzheimer’s, depression, stress, and pain, it’s hardly surprising that 49% of music therapists are in the healthcare industry.

Moreover, 16% of them work in the education industry. The rest are dispersed in the hospitality, government, technology, manufacturing, construction, media, and transportation industries, among others.

11. 85.7% of music therapists report using technology in their practice.

Of the participants in a study looking into the use of technology in music therapy before and during the COVID-19 pandemic, 85.7% responded positively, which means they do use technology in their practice. On the other hand, 16 participants (14.3%) said that they don’t.

12. Of those who don’t use technology in their music therapy practice, 85.2% state that they think technology can help them conduct sessions.

There are only a few music therapists that don’t use technology in the clinic setting or in their practice, but it’s clear that a majority of them think that it will help.

On the other hand, only 8.2% believe that technology won’t help, while 6.6% are undecided. This shows that music therapists are open to embracing technology in the field in the future.

13. More than half of music therapists believe that specialized MT software will be the most beneficial for their practice in the future.

14. 53.6% of music therapists believe that technology helps them observe their patients better.

Over the years, the interest of music therapists in using technology in their practice has increased significantly.

Particularly, some of the benefits that these music therapists noted are usability of observations, accuracy, feasibility, saving time, and broadening the scope of the assessment, among others.

15. In a recent study, all music therapists in North America indicated that they use technology to some extent in their practice.

Generally, the survey also showed that those in North America are more open to using technology and believing that it can help their patients during sessions. They also are more open to receiving training sessions and investing time to learn these technologies. On the other hand, music therapists in Europe were not so inclined to do so.

The Impact of COVID-19 on Music Therapy Practices

16. 32.1% of music therapists reported that music therapy was no longer provided during the COVID-19 pandemic.

This is a result of institutions deciding that music therapy is no longer viable amid the strict health protocols imposed due to the pandemic.

This decision greatly affected both patients and therapists. For example, many therapists lost their job, and a handful of patients were no longer receiving music therapy, which had drastic consequences, particularly in end-of-life care.

This means that face-to-face sessions were no longer allowed, which pushed therapists to come up with creative ways to stay in touch with their patients. This included the use of online methods, phone calls, and streaming.

However, even in circumstances where face-to-face sessions were kept, there were still health protocols in place (wearing a face mask, social distancing, and personal hygiene). Groups were also divided into smaller sections, and sessions were kept short.

18. In a recent survey, all North American music therapist respondents believe that there has been a greater need for music therapy since the onset of the COVID-19 pandemic.

The response across the globe was largely affirmative. In Asia or Oceania, 85.2% of music therapists believe that music therapy is in even more demand amid the challenges of the pandemic, while 79.6% of those in Europe agree with this statement.

However, despite this great need, it was greatly unfortunate that music therapists were forced to see fewer patients during this time, which was due to social distancing and clinics closing as a result of the lockdown.

Music is a potent tool for human connection, and in times of isolation, it greatly helps. That is also why, in general, 70.1% of music therapists in the survey believe that there is a greater need for music therapy amid the pandemic.

19. A little more than half of North American music therapists believe that conducting music therapy sessions online has been mostly as equally effective as face-to-face sessions.

This is an indication that tele-music-therapy (TMT) may not be embraced by the majority in the future due to its limitation and drawbacks and that in-person sessions are perceived to be far more beneficial.

What is music therapy used for?

Music therapy is an approach wherein the natural mood-lifting attributes of music are used to help people improve their mood, mental health, and overall well-being. This may involve activities like singing, writing songs, and listening to music. Music therapy can help those with depression and anxiety.

How many people use music therapy?

In 2010, the number of people receiving music therapy reached almost 1 million. In 2013, that number increased to 1.2 million. Finally, in 2021, music therapists around the world are helping over 1.6 million people. Thanks to media coverage and word of mouth, this figure is increasing yearly.

Is music therapy scientifically proven to be effective?

In addition to anecdotal evidence, studies have shown that music therapy is effective. For example, a comprehensive meta-analysis showed that music therapy treatment improved social functioning in serious mental disorders like schizophrenia, reduced symptoms of depression, and improved sleep quality.

What age group uses music therapy the most?

Research shows that the age group that uses this type of therapy the most is adults between the ages of 45 and 54. They were reported to have a more positive attitude about music therapy, which is why it can be used as a complementary treatment among these groups.

What is the job outlook for music therapists?

Music therapists have had a positive job outlook since 2004. Overall nationwide vacancies in this career have risen by 32% in the United States since that year, which equates to average yearly growth of 2.05%. By 2029, the demand will likely fill 26,660 jobs in this career.

We hope you found this article useful and informative! We know that music therapy is a growing field with many opportunities for growth, and its benefits are only becoming more and more apparent.

As more research is done and more people are exposed to the benefits of music therapy, we can expect to see the field continue to grow, which will be great for everyone involved!  So we wanted to give you all the information you could want in one place.

Thanks for reading, and stay tuned!

647 Music Slogans That Will Have You Grooving

909 Music Captions for Instagram to Keep the Beats Going