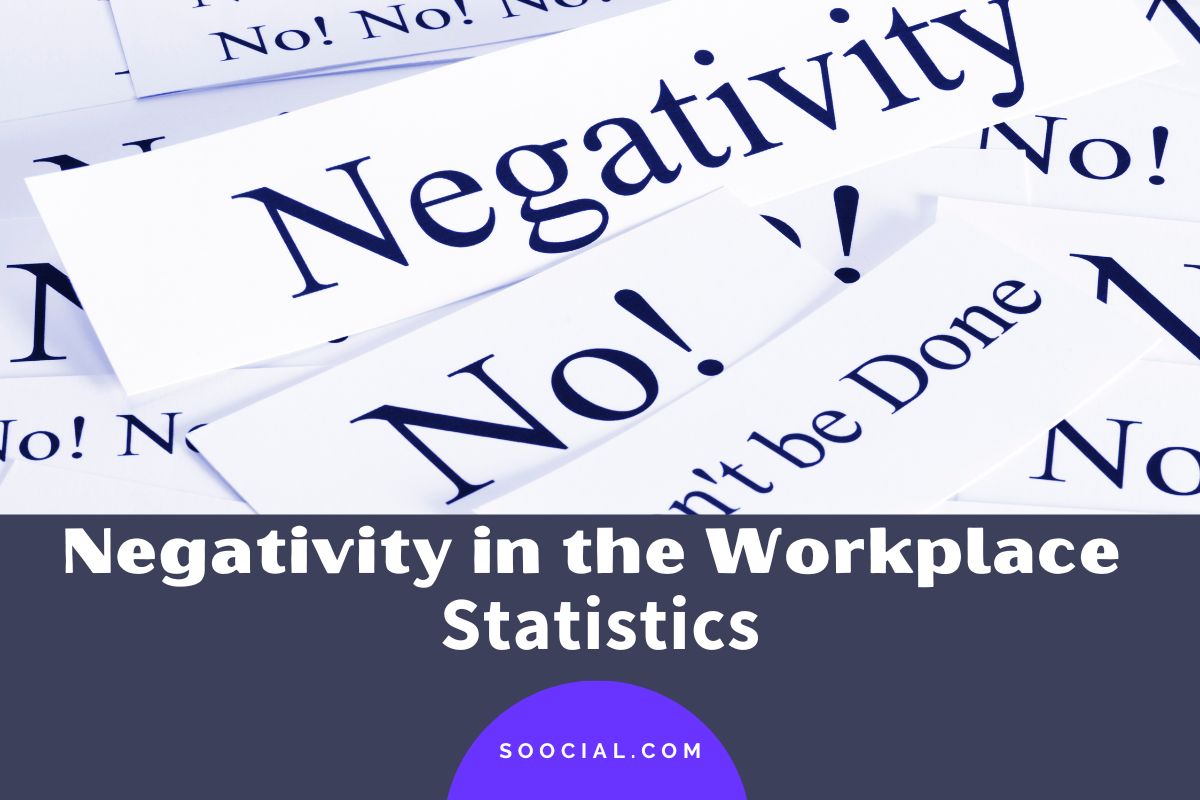 You know how it goes: you’re looking for the latest statistics on negativity in the workplace, and you can’t find them anywhere. You’ve spent hours searching, and you’re starting to feel like there’s just no one out there who cares about this topic as much as you do.

That is, until now. we here at Soocial have compiled a list of the most relevant statistics on negativity in the workplace into one place, so that you can finally stop worrying about finding them yourself.

So what are you waiting for? Go ahead and start reading—you’ll be glad you did!

Statistics on Negativity in the American Workplace

1. Almost 4 in 10 American employees state that their manager doesn’t frequently engage in open conversations about work.

Building a positive workplace requires open and continuous communication between managers, leaders, and other employees. The lack of open and honest communication is one of the primary reasons why many workplaces have problems with their culture.

That’s why it’s quite disheartening to know that a good chunk of managers in America is not doing their part to maintain a positive workplace.

2. 20% of American workers are not comfortable with having open conversations with their manager.

These workers state that their managers aren’t really doing much to create a comforting work environment for them. When employees don’t feel comfortable or don’t trust their managers, they can become more disengaged, and this can cause workplaces to be toxic.

3. Nearly two out of three American employees admit to having worked in a toxic work environment.

Additionally, 26% of them state that they have worked in more than one toxic workplace. This toxicity has manifested in various ways, including ageism, racism, and sexual harassment.

Unfortunately, toxicity in the workplace is commonplace. However, companies should take action to curb this toxicity because, at the end of the day, employees don’t care about their salaries or their number of vacation days as they care about workplace culture.

4. 28% of Americans state that a negative work environment makes them ill-tempered at home.

Employees who are stressed at work commonly bring that stress when they go home. This spillover is pretty common, with almost half of American workers having to postpone important events in their personal life, such as birthdays, graduations, and family gatherings, to tend to the demands of their work.

5. 26% of American workers between 65 and 74 years old experience ageism at work.

Ageism is a form of discrimination where an employee is subject to unfair treatment because of his or her age. In addition to the statistic above, 20% of those between the ages of 25 and 34 experience the same age-related discrimination.

However, it’s quite disheartening that the employment law in the United States only protects workers aged 40 and above from ageism because, realistically, employees of all ages have experienced discrimination and unfair treatment because of their age.

Ageism can happen at any time during someone’s employment, but it is most common during the application process.

6. An estimated three out of four working Americans believe that workplace culture depends on management.

From an employee’s viewpoint, managers and executives hold the most responsibility in establishing a strong workplace culture. They expect managers to set a workplace’s tone, establish good values, and open channels of communication.

7. 98% of employees have experience with workplace negativity or incivility at one point.

As it appears in this statistic, negativity in the workplace is commonplace, with nearly all employees experiencing it at one point in their working lives.

However, companies need to be able to distinguish the difference between a workplace with some rude people and one that’s systemically and endemically negative. The latter has a more toxic work environment with potentially dire consequences.

8. Executives and managers who work in Fortune 1,000 firms spend 13% of their working hours dealing with the consequences of workplace negativity.

As expected, workplace negativity costs a lot of money. Human resource professionals even say that even just one incident of incivility can consume weeks of effort and attention.

In fact, managers and executives who work in Fortune 1,000 companies spend a good deal of their work hours (approximately seven weeks per year) repairing employee relationships and dealing with other consequences as a result of negativity in the office.

Additionally, things can get costly and messy when attorneys or consultants have to be involved in settling an incident.

9. Nine out of ten employees are more productive when they’re surrounded by positive people.

Employees want a more positive work environment. I mean, who doesn’t, right? Employees who receive praise and recognition for their hard work are likely to be more productive and serve customers better.

Polls show that they’re more engaged at work than employees who are in a negative work environment where they are scarcely recognized for what they do.

10. 58% of employees who quit due to workplaces with a toxic culture said their managers caused them to leave their jobs.

However, managers have the biggest capacity to change the state of their workplaces. For example, they can build a positive workplace culture by listening to their workers, holding employees accountable for their actions, setting clear expectations, and verifying information when it’s not clear.

The Cost of Workplace Negativity

11. From 2014 to 2019, the turnover costs caused by employees leaving their jobs due to toxic workplaces caused by their managers reached $223 billion.

A huge percentage (58%) of employees who leave their companies because of a toxic or negative work environment state that it was their managers who caused them to ultimately leave.

With a huge turnover cost caused by such workplaces, it’s definitely worth looking into why this happens and what can be done to address this.

For one, companies can conduct development programs for managers to help them hone their leadership skills and soft skills. They also need emotional intelligence to build high-performing and highly engaged teams. Leadership has to be strategic and intentional to keep turnover costs relatively low.

Systemic negativity in the workplace is a major problem that no business should ignore or push under the rug. If left unaddressed, it results in financial consequences—to the tune of a whopping $3 billion per year!

That’s because maintaining a positive work environment is necessary for employee morale, which affects employee satisfaction and productivity.

Having managers and co-workers with a negative attitude can quickly turn things around for an otherwise positive team. This can have tremendous effects on any worker.

For example, this statistic states that nearly half of those who work in a negative workplace purposely don’t work as hard as the negativity is too much for them to bear and it weighs them down.

Not only does productivity suffer, but quality also does as well. When a worker is persistently experiencing incivility or negativity in the office, they’re less likely to be engaged.

They spend time worrying about the negative incident they experienced, and this can cause anyone’s motivation to waver. As such, workers who have been exposed to workplace incivility are more likely to intentionally turn in subpar output.

15. Employees exposed to workplace negativity are 30% less creative than those who aren’t.

According to an experiment conducted by a University of Florida professor, people who are treated rudely by others are less creative than those who aren’t. They generated 25% fewer ideas, and even if they came up with ideas, most of the ideas weren’t that original.

For example, when they were asked what they’d do with a brick, those who were exposed to negativity produced unimaginative ideas, such as “build a wall,” “build a house,” and the like. Meanwhile, others in the experiment provided answers like “sell it on eBay,” “decorate it and give it as a present,” and other similar answers.

16. A quarter of employees who were treated negatively take their frustrations out on customers.

This is one of the biggest consequences of having a systemically negative workplace. Employees don’t feel valued; instead, they feel frustrated and are likely to take their frustration and disappointment out on customers. For client-facing jobs, this can prove to be detrimental to a company’s success.

Additionally, customers who witness companies maltreating their employees are likely to take their business elsewhere. For example, if a store manager publicly reprimands an employee, customers will likely find this offputting and walk out of the store without buying anything.

It mostly doesn’t matter if the employee was wrong or if they did something illegal; people just want to see workers in an establishment being treated poorly, regardless of the cause.

17. 12% of employees who are treated negatively have left their job.

If you are treated with disrespect and incivility, you’ll eventually get to a point where you can’t take it anymore. When employees feel undervalued, disrespected, and unmotivated, they’re more likely to quit their jobs. Companies suffer as a result because increased employee turnover is quite costly.

18. 78% of employees who experience negativity in the workplace feel their commitment to the company declined.

Along with a declining commitment to the company, output quality, performance, and productivity suffer as well.

That said, 66% found their performance to have declined as a result of incivility in the workplace, and 63% lost precious work hours from avoiding the person who mistreated them.

How does negativity affect the workplace?

What causes negativity in many workplaces?

The primary causes of workplace toxicity or negative are too much workload, lack of trust in management’s ability to propel the company forward, anxiety about job security, insufficient recognition for each team member’s efforts and contribution, boredom with work, and lack of open communication.

What are the signs of a toxic workplace?

A toxic workplace is more than just a bad day at work. It looks like this:

In the worst scenarios, there will be discrimination, harassment, and bullying.

What are the types of negative people in the workplace?

There are mainly four types of employees causing negativity in the workplace:

How do you deal with negative employees?

To deal with these employees, the first thing to take note of is to resist the urge to rant and complain to prevent the negativity from spreading. You should instead address the issue directly with the employee by providing specific examples of the negative behavior and using personal observations.

The statistics are clear: negative people are bad for business.

In the workplace, negativity is a huge problem. It not only affects productivity and morale but it can also lead to reduced engagement and higher turnover rates.

But how do you deal with it?

It’s not easy being positive all the time, especially in a workplace where negativity is common. But there are steps you can take to improve your workplace culture and reduce negativity from creeping in.

We hope this information helps you become more aware of the negativity in your environment and gives you some tools for dealing with it. If nothing else, maybe this research will make you feel less alone in your experience.

Here’s to hoping for a more positive future!

26 Why Employees Quit Statistics That You Should Know