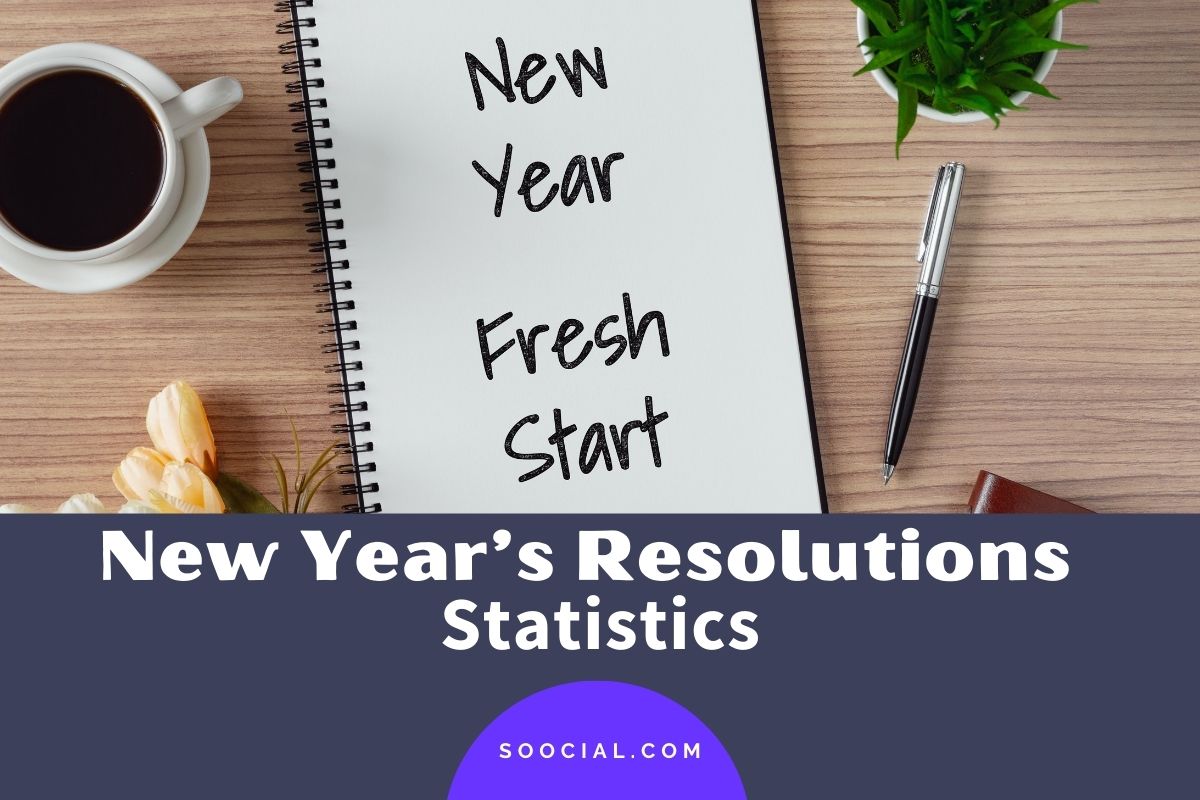 The new year is upon us—and that means it’s time for New Year’s resolutions! Every year, we hear about the most common resolutions (eat better, get fit, save money, drink more water) and how few people actually achieve them. We even have a term for the phenomenon: broken resolutions.

If you’re anything like us, your New Year’s resolutions will be broken within the first couple of weeks. But don’t despair, we’ve got you covered. Here are some great statistics to make you feel better about giving up on your resolution by mid-January.

We’re so excited to kick off the new year with a list of New Year’s resolutions statistics that will knock your socks off. We’ve done the research and compiled this list of data points that you’ll want to keep in mind as you move forward in 2022.

Not only will you see the common patterns in New Year’s resolutions, but you’ll also learn some fun facts to help you make your own goals this year.

The number of people committing to New Year’s resolutions in Britain is low, but increasing, according to a study conducted by YouGov. The report found only around 16% of Britons said they would be making a New Year’s Resolution going into 2022, compared to around 11% who said they made a resolution in 2020.

Younger people were more likely to make New Year’s Resolutions, according to the report, with around 32% of people between the ages of 18 and 24 saying they would do so, compared to only 10% of people over the age of 55.

According to the Global Consumer Survey conducted by Statista for 2022, around 39% of American adults made New Year’s resolutions for 2022.

The report found that many of the people making resolutions were focusing on exercising more and eating healthier, but a handful had started to focus on more modern resolutions, like “spending less time on social media” (21%) and reducing the amount of stress they experienced at work (21%).

According to a poll conducted by CBS News, the number of Americans planning on making New Year’s resolutions in 2022 dropped drastically compared to 2021.

Around 26% of Americans said they were discouraged from making a New Year’s resolution, potentially due to the unpredictable nature of the world at the time.

According to a poll by Ipsos and Urban Plates, around two in five Americans said they had a resolution planned for 2021. Of those planning their New Year’s resolutions, 20% of respondents said they were focusing on a single goal, while 18% said they had multiple goals.

What are the Most Common New Year’s Resolutions?

6. Improving health is the main theme of resolutions in the UK

A YouGov study at the end of 2021 found health was the most common theme among New Year’s Resolutions for all those considering making one. For the third year in a row, Britons focused on things like improving their fitness or exercising more (49%).

Around 41% of people in the study said they wanted to commit to improving their nutrition and diet, while 40% want to specifically lose weight. Women were more likely to focus on weight loss than men, at 44% compared to 34%.

7. About 50% of Americans made resolutions about getting in shape in 2021

Underneath the top themes of losing weight and becoming fitter, Americans prioritized things like saving more money (44%) and improving their diet (39%). Around 21% of Americans said they wanted to pursue a career ambition in the year ahead, while 18% went the other direction and said they wanted to spend more time with their family.

8. Women are more likely to make resolutions to live healthier

Around 4 in 5 Americans n the study also said they were confident they would be able to stick to those goals, and around 57% said they believed their lives would be better in 2022 than in 2021.

9. 58% of Americans plan to make small changes with resolutions

A study conducted by OPTAVIA and reported by Medifast found around 49% of resolutions still focused on factors like improving financial health, while other common resolutions looked at improving holistic wellness (46%), and improving body positivity (43%).

However, to combat previous failures, around 58% of Americans were planning on incorporating small changes into their daily lives, rather than making huge changes immediately.

Around 42% said they were going to celebrate more small victories in their lives, and 49% claimed they would be setting goals to build healthier habits. 66% of the respondents in the study said they were focusing on losing weight through daily lifestyle changes rather than short-term diets.

10. The pandemic had an impact on New Year’s Resolutions for 2021

11. 74% of Americans said they wanted to make lasting positive changes in 2022

A survey conducted by One Poll and commissioned by N!CK’S, found around 75% of people said they were less concerned about fulfilling typical New Year’s resolutions.

69% said they’re less focused on making major lifestyle changes, and are more concerned about ensuring long-term happiness. Around 74% of respondents said they wanted to make long-lasting positive changes to their lifestyle in 2022, which would make them happier.

79% of respondents said they wanted to make changes for 2022 that were good for both their health and happiness.

How Successful Are We at Keeping New Year’s Resolutions?

The Chair of Psychology at Scranton, Professor John C Norcross has produced numerous studies over the years discussing the nature of New Year’s resolutions and the science behind them.

By the time 6 months have passed, fewer than half of all people (46%) will still be keeping their New Year’s resolution.

According to YouGov’s study at the end of 2021, around 31% of people who made New Year’s resolutions for 2021 were successful in sticking to those resolutions for the full year. Men were more likely to claim they had kept all of their resolutions than women, at around 38% compared to 26%.

Approximately 44% of the people in the study said that while they didn’t keep all of their resolutions, they were able to stick to some of them.

Around 19% of people said they didn’t keep any of the resolutions they made this year, balancing at around 15% of men, and 22% of women.

14. January 19th is the day you’re most likely to give up on a resolution

Using research into over 98.3 million user-logged activities, the Strava fitness app discovered people were most likely to give up on their resolutions entirely on January 19th. Strava now officially refers to this day in its marketing as “Quitter’s day”.

The US News Report team recommends strategies like developing critical awareness and starting with smaller goals to improve your chances of success.

16. Only 10% of US adults stick with their resolutions

A study conducted by OPTAVIA and reported by Medifast Inc found only 10% of American adults actually stick to their New Year’s resolutions as of 2021, and around 47% of all resolutions are broken in the first month of the new year.

The report also found the number of people setting resolutions decreased drastically, moving from around 50% of the respondents in 2021 to approximately 44% in 2022.

According to the report, the primary reason people gave for failing to reach their goals was a lack of motivation, at around 48%. Other common reasons included lack of a plan at 30% and limited support at 22%.

17. 55% of Americans don’t keep resolutions for a full year

A poll by Ipsos and Urban Plates found around 55% of people who make a resolution didn’t keep to their promise for the full year. 11% of people answering the survey in total said they kept to their resolutions for less than one month.

Lack of motivation was the main reason not to carry on with a resolution (35%), though some respondents said they were too busy (19%) or they changed their mind about what they wanted to achieve (18%).

18. Only 35% of people believe they’ll achieve their goals

A survey of 2000 American adults commissioned by N!CKS and conducted by One Poll found only 25% of people believe they’ll achieve some of their goals, and 4% don’t believe they’ll be successful with any.

For the people who didn’t expect to reach their targets, February 4th was considered to be the most likely day when they’d give up on all their goals.

When asked why they felt it was so hard to stick to a resolution, 42% said they struggled to give up something they enjoyed, and another 42% said they thought they had been overly ambitious with their goal setting. 38% claimed they didn’t have a good support system to cheer them on, and 37% said they set too many goals.

A large-scale study into which New Year’s Resolutions were likely to lead to more successful results than others found participants setting approach-oriented goals were more likely to achieve their targets.

58.9% of the people who used approach-oriented goals achieved their targets and stuck to their goals for the year, compared to 47.1% of people with avoidance-oriented goals.

A study conducted by Fidelity found 84% of respondents learned to “let go” of worrying about things they couldn’t control during the pandemic, and improved their focus on achieving smaller personal goals.

The percentage of respondents who said they stuck to their New Year’s Resolution as a result of the mindset change in 2021 was 71%, compared to 58% in 2020.

So: The odds are against you.

The thing is, if you make it to February, the chances of you making it through the year are much better.

Keep going, even if it’s hard. And if you need help, we’ve got your back! We’re here to support you every step of the way.

It’s been great digging into the data about New Year’s Resolutions with all of you, and we hope that you’ve seen some interesting data that’s made you think. Hopefully, you’ll keep these numbers in mind as the new year approaches and you make your New Year’s resolutions.

You can also use this data to create a New Year’s resolution of your own: Be there for someone who needs help keeping their resolution! OR maybe even make it your goal to help them achieve their goals.

Just remember: You can inspire someone else by talking about what you do to reach your goals. The struggle is real and sharing it makes the journey less lonely!

So go on—make this the best year yet!