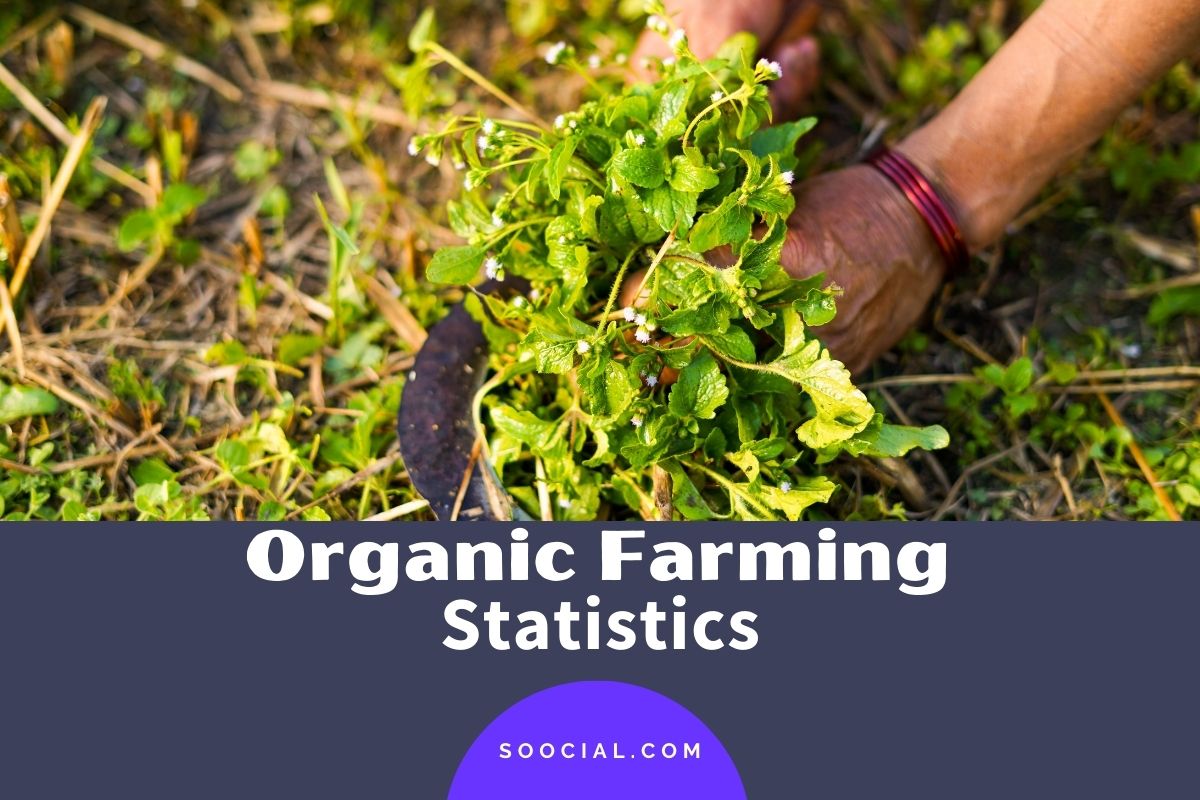 Many people wonder if organically produced food is healthier, and it often is. It has more nutrients because of the soil it grows in. Apart from that, organic farming reduces erosion, recycles animal waste, and decreases nitrate leaching into the water.

However, it has its drawbacks. Should we entirely switch to organic farming, and is that even possible? You’ll find answers to all your questions from the organic farming statistics we’ve compiled for you.

Read more about the organic farming industry, its pros and cons, and many other interesting things.

Contents show
Key Organic Farming Facts and Stats (Editor’s Pick)
Global Organic Farming Statistics
1. Organic farms could account for 25% of the total agricultural land in Europe by 2030.
2. Organic agriculture is practiced in 187 countries.
3. 1.2% to 1.5% of the world’s agricultural land is organic.
4. Liechtenstein has the largest share of agricultural land (38.5%).
5. In India, only 2% of farmland was under organic cultivation as of March 2020.
6. Germany, Austria, France, and the UK have the highest number of cows for organic dairy production.
7. In 2019, Australia had a 50% share of the worldwide organic agricultural land area.
8. The global organic farming market is forecasted to reach $151.36 billion by 2025.
U.S. Organic Farming Statistics
9. There are 5.5 million certified acres and 16,585 organic farms in the US.
10. Research shows that 29% of organic farmers in the US planned to expand production between 2019 and 2024.
11. North America had a 5% share of the global organic agricultural area in 2019.
12. The average organic farmer salary in the US is $53,254 per year, but 9% of farmers earn this much.
13. There are around 3,012 organic farms in California.
Organic Farming vs Conventional Farming Statistics
14. Organically managed fields have approximately 19.2% less yield than conventional fields.
15. The global organic conversion would result in a 16% to 33% increase in land use.
16. The average price of organic foods can be twice as expensive as conventionally grown products.
17. In the US, yields of organic legumes were 20% lower compared to yields of conventionally grown legumes.
18. Almost 500 million pounds of pesticides could be prevented from getting into the atmosphere every year if all farmers in the US switched to organic farming.
Other Interesting Stats on Organic Farming and Foods
19. A study showed that organically managed soil had 8.33% of organic matter content.
20. Children who follow organic diets have a considerably lower amount of pesticides in their urine.
21. If at least 95% of a product’s ingredients are organically produced, it can be labeled as organic.
22. The average size of an organic farm in the US is 333 acres.
Related Questions
What percent of farming is organic?
Is organic farming increasing?
Which country has the most organic farms?
What percentage of US farmland is organic?
How do organic farming practices relate to soil health?
Conclusion
Sources

1. Organic farms could account for 25% of the total agricultural land in Europe by 2030.

IFOAM Organics Europe demands enabling systematic data collection regarding organic agriculture. That’s because the EU Action Plan for Organic Agriculture and Farm to Fork Strategy’s plan is to increase the percentage of agricultural land in Europe to 25% by 2030. In order to accurately track their progress, they need detailed information.

2. Organic agriculture is practiced in 187 countries.

Organic farming statistics from several sources point out that between 1.2% and 1.5% of the total agricultural land is organic. Unfortunately, it’s not easy to determine the exact percentage because there’s still little data regarding 2021 and 2022. Still, we know that there were 57.8 million hectares in 2016 (14.3 million less than in recent years).

Seeing as how organic systems make up less than 2 percent of the total agricultural production land, there’s clearly a lot of room for growth in this industry.

Even if Liechtenstein is a very small country, its inhabitants try to produce food without synthetic pesticides as much as they can. As a result, almost 48% of the total agricultural land in Liechtenstein is organic. Other countries with a high percentage of organic farmland are Samoa (34.5%) and Austria (24.7%).

5. In India, only 2% of farmland was under organic cultivation as of March 2020.

Even if there’s 140.1 million ha of agricultural area in India, only about 2.78 million is under organic cultivation. Organic farming statistics in India indicate that Rajasthan, Madhya Pradesh, and Maharashtra account for about 50% of organic farmland.

6. Germany, Austria, France, and the UK have the highest number of cows for organic dairy production.

Organically produced dairy products are a crucial aspect of organic farming and large organic farm cow numbers are expected to increase in the future. Statistics also prove that organic milk is healthier.

Therefore, consumers that try to live a healthy lifestyle and have ecological consciousness opt for ecological dairy products. As a result, organic milk is gaining worldwide attention, and its market is expanding.

7. In 2019, Australia had a 50% share of the worldwide organic agricultural land area.

According to Statista’s data from 2019, Australia was the region with the largest share of the global organic agricultural area. It’s also important to note that there were 71.5 million hectares of organic farmland in the world in 2018.

The worldwide organic market was worth $95.38 billion in 2020, meaning that the future for the organic farming industry is bright. Namely, its market value is estimated to increase by $55.98 million between 2020 and 2025.

According to the latest USDA survey, organic agriculture is booming, even though it’s a small sector of US agriculture. California has the largest sales ($3.6 billion) and over 3,000 organic farms. Washington is right behind California, with $886 million in sales, along with Texas ($424 million) and Oregon ($454 million).

Organic farming facts from USDA Research that included 16,585 certified organic farms suggest that almost 30% of farmers who work on organic fields planned to expand production in the following five years. On the other hand, 44% reported that they wanted to maintain their production level.

11. North America had a 5% share of the global organic agricultural area in 2019.

In 2019, Oceania was the state with the largest market share of the organic agricultural area in the world (and it still is). Also, it accounted for 50% of the global market share, while Europe held 23%, Latin America 12%, Asia 8%, and Africa 3%.

California is the state with the highest number of organic farms. There are more than 3,000 organic farms and 965,257 certified acres of organic farmland in this state. Still, this number is incredibly low compared to all the farms in Texas (247,000).

15. The global organic conversion would result in a 16% to 33% increase in land use.

Some organic vs conventional farming facts, such as this one, reveal certain drawbacks of organic farming. Since there’s less yield because organic products are produced without fertilizers and pesticides, we have to use more land to make the same amount of organic food. That means we can’t feed the global population if we entirely replace conventional farming with organic farming.

16. The average price of organic foods can be twice as expensive as conventionally grown products.

The average price of organic products can be even twice as the price of conventionally raised vegetables and fruits. This is one of the facts about organic farming that describes the problem with less yield, which leads to higher prices. However, many consumers think that a higher price means that a product is healthier.

17. In the US, yields of organic legumes were 20% lower compared to yields of conventionally grown legumes.

18. Almost 500 million pounds of pesticides could be prevented from getting into the atmosphere every year if all farmers in the US switched to organic farming.

If every US farmer switched to organic farming, they could stop nearly 500 million toxic and residual pesticides from entering the atmosphere. Apart from that, organic growers and their families have better health because they consume less chemicals through food.

Other Interesting Stats on Organic Farming and Foods

19. A study showed that organically managed soil had 8.33% of organic matter content.

According to the National Soil Project analysis that lasted nine years, organic soil had approximately 8.33% of organic matter content, while conventionally managed soil had roughly 7.37%. However, even if soil rich in organic matter can produce more yields, the lack of synthetic fertilizers and pesticides hinders organic farming.

20. Children who follow organic diets have a considerably lower amount of pesticides in their urine.

Science has proven that children who eat organic food have less pesticides in their urine. Nevertheless, some amazing facts about organic farming reveal that food isn’t necessarily healthy. For example, if an oreo cookie was made of organic ingredients, it would still be unhealthy.

21. If at least 95% of a product’s ingredients are organically produced, it can be labeled as organic.

One of the interesting facts about organic farming and food is that only the products with the “100% organic” label are entirely organic. That’s because it’s difficult for foods with many ingredients to be completely made from organic ingredients. Therefore, if 95% of a product is made in like manner, it’s considered organic.

What percent of farming is organic?

Furthermore, many countries plan to invest in organic farming, meaning that the prices of organic products will decrease.

Judging by all the statistics about organic farming, it’s evident that organic food has become more popular. People have become aware of the environmental issues and many harmful effects pesticides have on their health and the environment.

It’s important to note that organic farming is practiced in 187 countries, and at least 3.1 million farmers work on them. However, some of them mix conventional and organic crops and livestock.

Which country has the most organic farms?

Liechtenstein is the country with the largest organic share of the total farmland (38.5%). Right after Liechtenstein come Samoa, with 34.5%, and Austria, with 24.7% of organic farmland.

In sixteen other countries, 10% or more of the total agricultural land is organic. Liechtenstein is a microstate located between Austria and Switzerland and one of the smallest countries in Europe.

What percentage of US farmland is organic?

There are 5.5 million certified acres and 16,585 organic farms in the US alone—more than ever before. Nonetheless, North America accounted for only 5% of the global organic agricultural area in 2019.

How do organic farming practices relate to soil health?

Organic soil is incredibly beneficial. One of the main benefits of soil rich in organic matter is holding more air and water. Additionally, it can inhibit erosion, supply a steady release of nutrients to plants, and host various kinds of beneficial microorganisms.

Another thing worth mentioning is that organic production methods can lock up carbon and nitrogen. Organic farming statistics reveal many more beneficial effects, but its drawbacks, as well.

Even if organic produce is healthier and there are some environmental benefits of organic farming, it’s debatable whether we should stop producing food conventionally.

This industry seems to grow along with the demand for organic products, so mixing conventional and organic ways of farming would be the best option.

Recent trends in organic farming show improvements in production methods. We hope that we’ll be able to get more yield even without pesticides in the future, which would lead to price reduction.

All in all, organic food is slightly better for your health and if you want to contribute to solving some major environmental issues, occasionally buy organic products.

It’s clear that organic farming is more prevalent than ever before, and it’s exciting to see what will happen as technology improves and more people realize the impact of their food choices.

While we don’t always have the option to choose organic products over conventionally-produced ones, when we do, it can make a difference in our lives and for our planet.

We hope you were as inspired by these numbers and facts as we were when we compiled them. If so, give yourself a pat on the back—you deserve it!

Hope you have a great rest of your day, and we’ll see you next time!