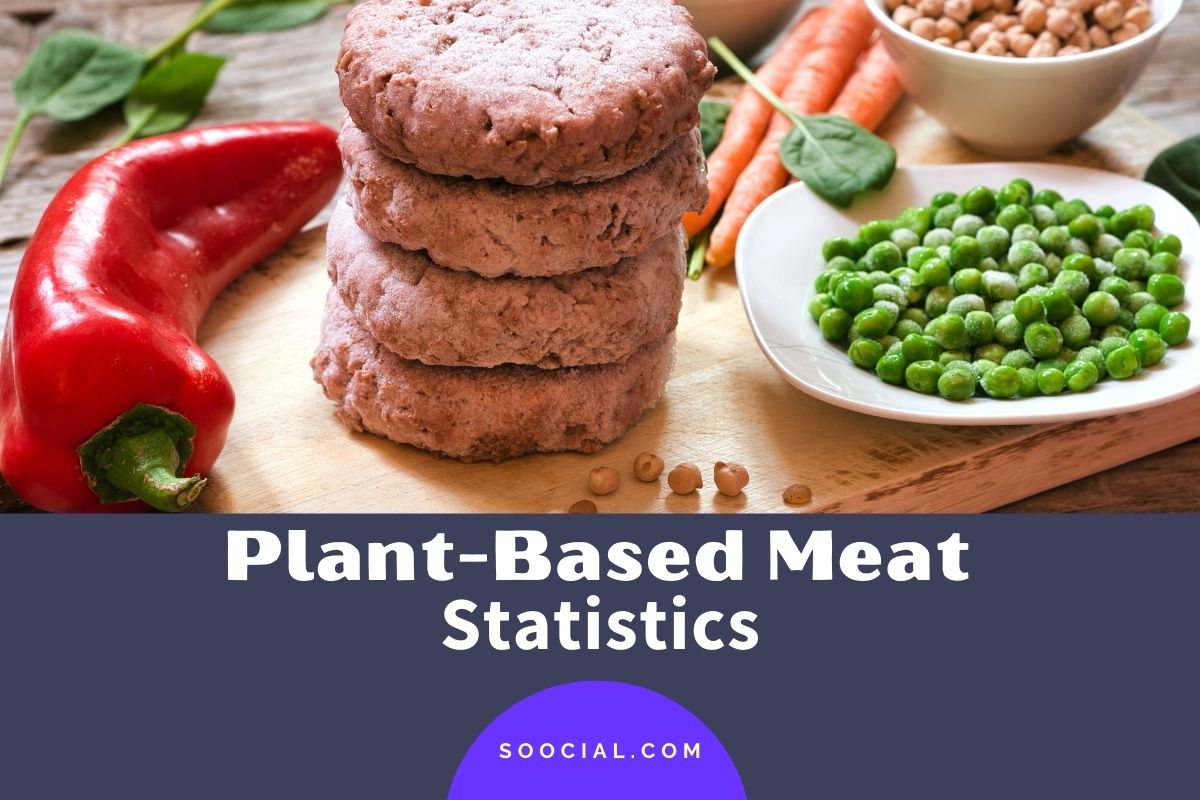 It seems almost impossible that some plant-based products taste the same as meat. Luckily, vegans and other people who follow similar diets don’t have to give up on their favorite foods anymore, as they have cruelty-free alternatives for almost anything.

Plant-based meat has become much more prevalent because people are more aware of how detrimental the meat industry is to our environment. Also, it’s healthier than conventional meat.

We’ve compiled various plant-based meat stats to help you get a bigger picture about its market, consumers, and benefits. Therefore, read on to find out more about plant-based meat.

The plant-based market is projected to grow at a CAGR of 15% between 2020 and 2027. Some factors that could influence this industry’s growth are concerns about animal cruelty, increasing consciousness about the benefits of eating vegan meat, and more people who follow a plant-based diet.

2. Only 4% of plant-based meat sales in the US are from Impossible Foods.

Impossible Foods is a company that produces plant-based meat. However, while Beyond Meat’s market share stands at 25%, Impossible Foods hold only 4%. These two companies are the most prominent in the vegan meat industry, but it seems that Beyond Food has a larger market share.

3. Beyond Meat’s burgers and sausages are available in 122,000 stores worldwide.

Impossible foods vs Beyond Meat market share statistics reveal that Beyond Meat is considerably more popular. Namely, it’s possible to find Beyond Meat’s products in more than 120,000 stores around the world, while Impossible Foods’ burgers and sausages can be found in only 20,000.

The plant-based meat market size in 2021 was almost $940 million, meaning that the demand for such products in the US is growing. They’re more available, and customers can now find them even in regular grocery stores and markets.

6. Plant-based meat and dairy could comprise 7.7% of the worldwide protein market by 2030.

As plant-based food sales are very likely to increase by five times until 2030, the plant-based meat industry growth is inevitable. Furthermore, meat and dairy substitutes are healthier, and younger generations are more prone to purchasing more nutritious foods. Therefore, we can conclude that these estimations are correct.

According to consumers, health benefits and different sources of protein are the primary reasons for buying plant-based meat. Nevertheless, the two most popular plant-based meat companies, Beyond Meat and Impossible Foods, report that 90% of their customers buy animal products.

According to plant-based consumer demographics, younger generations are more likely to be aware of all the benefits of the vegan lifestyle and plant-based food, so they purchase it more frequently.

On the contrary, 51% of those aged 60 or older never buy plant-based meat. The same statistics show that men aged 44-75 are the least likely to worry about environmental issues.

10. Around 62% of plant-based food buyers in the US purchased beef-style alternative burgers in 2021.

Over 50% of people choose to eat meat because they like it more than plant-based alternatives. Apart from that, 27% of them don’t like the taste of plant-based meat, 25% think it’s too expensive, 21% claim it’s too processed, and 20% don’t like its texture.

12. Australia and Eastern Europe have the smallest plant-based meat market share (2% per region).

Eating plant-based meat isn’t a popular trend in Eastern Europe and Australia. In fact, North America and Western Europe hold the majority of the global market share (44% and 34%, respectively). On the other hand, the Middle East and Africa account for 4%, while Latin America accounts for 3%.

According to a report that includes data collected from 880,000 American restaurants, consumers are most likely to find vegan meat options in New York.

Plant-Based Industry Trends and Other Noteworthy Stats and Facts

Switching to plant-based meat or at least increasing its intake can have a tremendous impact on the environment and save countless lives.

Research conducted by World Animal Protection revealed that fast-food restaurants saved around 92,000 cows, 212,000 pigs, and 405,000 chickens in 2021, all thanks to vegan meat alternatives.

Luckily, plant-based meat market trends for 2022 reveal that there will be even more meatless options at fast-food restaurants.

17. Eating less meat can save 10 million human lives per year.

Apart from saving lives, a plant-based diet can save $30 trillion only from the health benefits, as it can lower the rates of chronic diseases like type 2 diabetes, heart disease, and cancer. That’s why people should consider following a vegan diet or reducing their meat intake.

18. Those who consume the most plant protein have a 29% lower risk of heart disease.

One of the well-known plant-based meat nutrition facts is that it lowers the risk of heart disease.

Piplsay surveyed 30,700 Americans in 2021 and found out that 70% of Americans liked plant-based or fake meat at fast-food restaurants, while 60% would continue eating it. Also, only 29% didn’t know that several major US fast-food chains served plant-based meat.

According to the US Bureau of Labor Statistics, ground beef can cost between $4.1 and $6, while the cost of Impossible Foods’ two quarter-pound patties is $5.49. The goal of this company is to keep lowering prices and eventually undercut the price of ground beef.

It seems that people have become more aware of the benefits of plant-based meat. Apart from being healthier than real meat, its production is environmentally-friendly.

Even if older generations usually don’t put a lot of faith in plant-based meat and believe real meat is an essential part of our diet, Millennials and Gen Zers don’t think the same. That’s why the plant-based meat industry has a bright future.

On top of that, the plant-based meat market share has increased significantly during the past several years, meaning that all estimations regarding this industry are most likely to be correct.

What is plant-based meat?

Plant-based meat is a term for food made of plants but mimics the taste of meat and fish. Not all fake meats are plant-based, as some of them contain eggs or milk. Other ingredients such meat is made of are tofu, soy, vital wheat gluten (seitan), potato starch, various kinds of nuts and seeds, etc.

Eating plant’-based meat is healthier and can help with weight management. Furthermore, research shows that it can also prevent various health issues, like cardiovascular disease and hypertension.

Why is plant-based meat so expensive?

What chemicals are in plant-based meat?

Since plant-based meat isn’t natural, it’s expected that it contains unhealthy chemicals. The most common are:

Is plant-based meat really better for the environment?

Yes. Firstly, plant-based meat produces fewer greenhouse gas emissions and requires less land space. Also, while it takes between 2,000 and 8,000 gallons of water to produce one pound of beef, only 300 gallons of water is needed to make tofu. Livestock production leads to more groundwater pollution, as well.

There are many other reasons why plant-based meat is better for the environment. Of course, its production can negatively affect the environment, but producing meat is much more detrimental.

How popular is plant-based meat?

If we consider that plant-based meat and dairy sales could reach $162 billion by 2030, we can conclude that vegan meat will be even more popular than before.

The number of vegans in the US has increased compared to the previous years, as well as the demand for plant-based meat. Plant-based meat stats also reveal that vegan meat and dairy could comprise 7.7% of the global protein market by 2030, which is encouraging.