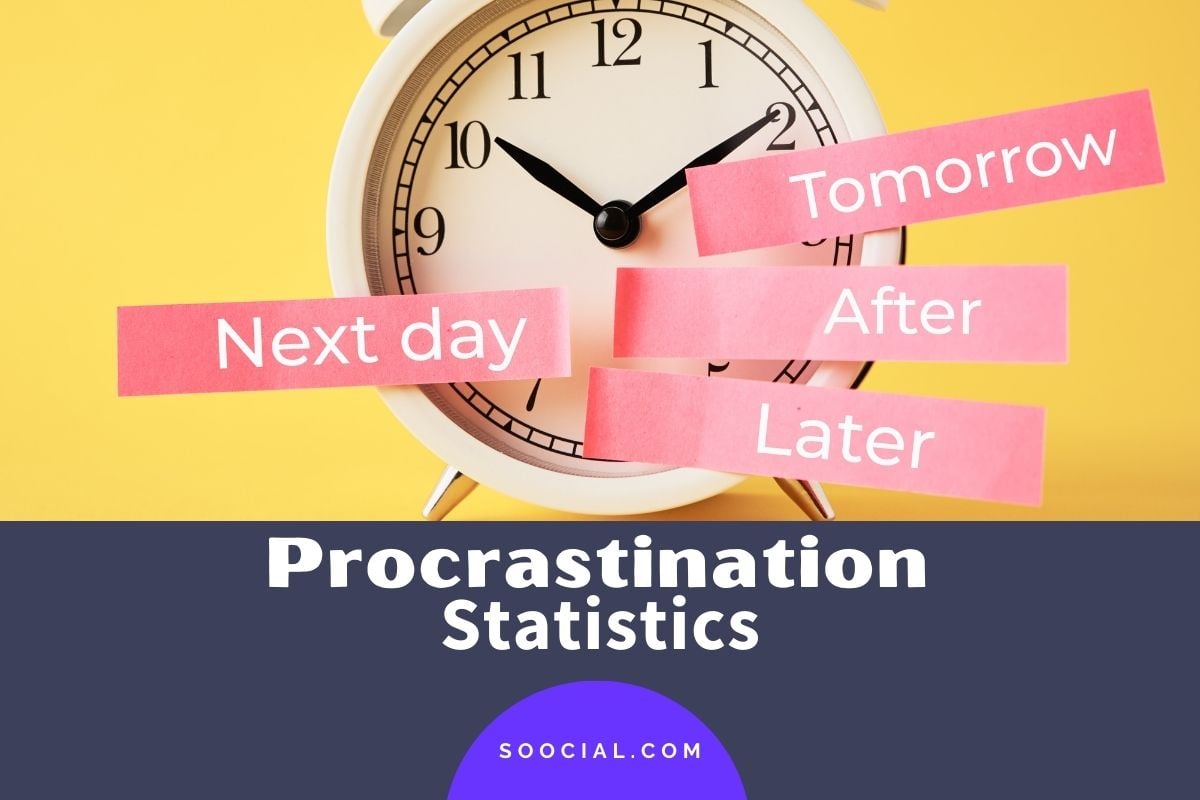 Procrastination is a problem that we all face.

In fact, it’s more likely than not that you’re probably procrastinating right now! (Don’t worry: We won’t tell anyone.)

There’s always internal and external pressure to get things done. But sometimes, it feels like there’s just no way we can get our homework done by the deadline, or work on a big project by the deadline. And it’s easy to feel like you’re alone in your struggle. It’s easy to feel like you’re the only one who just… doesn’t want to do anything productive with their time.

Procrastination is the common enemy of every person on this planet, the thief of time, and the destroyer of dreams. We have all felt its grip.

But you’re not alone! In fact, statistics show us that we’re ALL procrastinators—and that even if it feels like we’ve got everything together, we could still probably be more efficient with our time.

No matter how much experience you have with procrastination, it’s never too late to learn more about it. In fact, learning about the science behind why people procrastinate can help you hone your skills as a master procrastinator and make sure that the time you spend putting off your work is actually worthwhile (and yes, we know that sounds like a contradiction).

Read on below for our curated list of procrastination statistics that are guaranteed* to help you become an even better procrastinator (*not really guaranteed).

Here are some fascinating statistics about procrastination to help you overcome your tendency to put things off.

1. In the 1970s, only 5% of adults were considered chronic procrastinators.

Considering the percentage of adult procrastinators right now, which is at most at 20%, this statistic is really worrisome. Nowadays, with the digital age and having more forms of distraction, the actual rate of procrastination could be higher than what we see in these studies.

2. Approximately 15–20% of the adult population are chronic procrastinators.

3. The age group of 14–29 years olds procrastinates the most.

A German Representative Community Study published in the National Library of Medicine found that procrastination decreases with age. Naturally, younger people were more likely to procrastinate than older age groups, especially younger men. It probably has to do with the distractions that come with youth.

4. 74% of people surveyed in a study stated that they procrastinate their bedtime at least once a week.

Many people engage in numerous forms of procrastination—even to the point of going to bed later than planned. According to a study conducted on an adult sample, 74% procrastinated like this at least once a week. When they were asked why, they couldn’t give an external reason.

That’s almost two months a year or 218 minutes per day spent on procrastination. This trend is likely to go upwards in this digital age if people don’t practice mindfulness and mood regulation.

You’ve got an essay due in seven hours. The problem? You haven’t even started.

But here’s the thing: you’re not alone!

In fact, procrastination is one of the biggest pains in the butt that plagues students everywhere—all over the world and every day of the year.

6. Around 80–95% of college students procrastinate.

Although this is hardly surprising since most procrastinators come from this age group, it can still be quite problematic. To top it off, 75% of college students consider themselves chronic procrastinators.

According to a survey conducted by StudyMode, an ed-tech company, 87% of high school and college students admit they procrastinate.

7. 50% of college students admit that their procrastination habit is consistent and problematic.

Procrastination is a common occurrence among students — not just among college students but also among elementary, middle school, and graduate students. In fact, it’s so common among students that there is a term called student syndrome, which is the tendency to put off tasks until the last minute.

8. 65–75% of graduate students want to reduce their procrastination.

Among graduate students, procrastination is associated with task aversion, self-efficacy, fear of failure, and other types of academic-related anxiety. Among students, the frequency of procrastination depends on the task involved. Based on a study, students seem to procrastinate the most on writing their term papers, with 46% of them putting it off until the last minute. Additionally, 28% of students put off studying for exams.

On the other hand, when it comes to general school activities, only 10% of students procrastinate. However, 11% put off administrative tasks, and 23% put off attendance tasks.

12. Students state that procrastination takes up a third of their daily activities.

This comes in the form of sleeping, playing video games, watching TV, or browsing the internet — probably also involves watching cat videos. Unfortunately, this causes students to miss critical deadlines and rush to complete their coursework.

13. 88% of employees admit that they procrastinate for at least an hour per day.

This survey included data from 2,219 workers. With this statistic, it’s safe to admit that procrastination is a rampant problem in the workforce and life in general. Procrastination decreases employee productivity and hinders employees from reaching their full potential.

14. An estimated 76% of entrepreneurs report procrastinating for one to four hours per day.

According to a study by author Darius Foroux, there are more “casual procrastinators” among salaried workers (80%) than the self-employed. These are individuals who procrastinate for one to four hours per day.

15. An estimated 10.9% of salaried workers report that they don’t procrastinate.

As a stark contrast, 14.5% of self-employed individuals don’t procrastinate. The key to beating procrastination is consistency. When you consistently deliver results, you’re more likely to be motivated.

There is a lot of incentive for entrepreneurs to help their employees avoid procrastination. For example, an employee earning $40,000 per year and procrastinating for three hours a day can cause a productivity loss of $15,000.

16. There are more “hardcore procrastinators” among entrepreneurs than salaried employees.

Why Do People Procrastinate?

17. 50% of people pinpoint the nature of the task as the reason for procrastinating.

Upon going into specifics, two common reasons why people procrastinate due to their task are either that the task is viewed as boring or the punishments or rewards are far off into the future. For example, if you still have a month to finish an assignment, you’re more likely to put it off at the last minute.

18. Low self-confidence was a cause for procrastination among 8% of individuals.

Having low self-confidence can cause you to doubt your ability to complete the task at hand successfully. You could also likely be afraid to fail, and this fear of failure can cause you to procrastinate and avoid the task.

19. 28% of students indicate tiredness as a cause of procrastination.

Studies show that tiredness or not having the energy to start a task is one of the top three culprits of students procrastinating. Students state that they’re tired because of a couple of reasons, including lack of sleep and having a high academic workload.

20. 6.4% of students admit that their procrastination is influenced by sensation seeking.

However, keep in mind that this only has little influence on the procrastination habits of students. Students were found to like the sensation and challenge that comes with putting off doing their tasks at the last minute.

The Negative Impact of Procrastination

21. 94% of people report that procrastination negatively impacts their happiness.

It’s more than just putting things off until the last minute; procrastination also causes people to lie to justify their delays, which can lead to disaster and cause unhappiness.

22. 70% of procrastinators are likely to be less happy than the average person.

This statistic was found by the Procastinus website survey center. Chronic procrastination can cause unhappiness. You regret not getting the job done promptly, and you feel guilt and shame. You might also feel anxious about not finishing the task. It’s a vicious cycle that can be challenging to break.

23. Those who have a higher tendency to procrastinate comprise 57% of unemployed individuals.

24. A single-point increase on a five-point procrastination tendency scale translates to an estimated $15,000 salary drop.

It is no surprise that people who procrastinate more don’t necessarily get salary raises or promotions. Employers love workers who get things done, so they’re likely to get higher salaries as well. Procrastination also causes employers to lose valuable work hours, which can hurt their overall profit margin.

25. 45% of students report that procrastination regularly affects their grades negatively.

This statistic is according to a survey conducted by StudyMode involving 1,300 high school and college students. When asked about their study habits, these students reported that their habitual procrastination affected their grades negatively on a regular basis.

What percentage of the population are procrastinators?

Despite 94% of people indicating in one survey that procrastination hurts their happiness, 15–20% of adults still report being chronic procrastinators. Additionally, approximately 25% of the adult population identify procrastination as a defining trait for them, which is concerning, to say the least.

What percentage of students struggle with procrastination?

You need to brace yourself for this next one. Studies by the American Psychological Association (APA) show that anywhere from 80–95% of college students are, to some degree, procrastinators — particularly when it comes to their coursework.

What age group procrastinates the most?

According to a German representative community study published on the National Library of Medicine, procrastination was highest in the youngest age group (14–29 years old). In particular, the males were bigger procrastinators than the females in this age group. The study consisted of 1,350 women and 1,177 men between 14 and 95 years old.

How long does the average person procrastinate?

According to a YouGov survey, the average person spends 218 minutes per day procrastinating. That is equivalent to a whopping 55 days spent procrastinating each year.

Additional statistics show that an average of 1.59 hours per day of procrastination is spent on the internet. In this digital age, the procrastination trend is moving upward rather than downward, so the actual numbers could be higher than what is found in these studies.

What is the psychology behind procrastination?

Psychologists have linked procrastination to several factors, including lack of structure in one’s routine, low self-confidence, anxiety, or simply the lack of motivation to complete distressing or enormous tasks. Further research shows that obsessing over negative thoughts can lead to procrastination.

And there you have it— procrastination statistics that prove the world is full of people like you and me who just can’t seem to get around to things.

What’s really interesting about looking at statistics like these is that we realize we’re not alone. It’s easy to feel isolated or lonely when we’re lying in bed at 3 AM, thinking about all the things we’re supposed to be doing but didn’t do. But that’s not true! We’re part of a worldwide community of procrastinators!

We hope this list has been helpful and encouraging, and that it can help you learn a little bit more about why you procrastinate and how you can break away from some common traps.

Do you have any thoughts on this subject? Do any of these statistics surprise or shock you? Let us know what you think by sending us an email!

If you feel like you aren’t ready to tackle your problems yet, that’s okay too. But if you can start taking action today, what are you waiting for? Don’t wait any longer! Go out there and start working on the things that matter most to you.

23 Binge-Watching Statistics You Should Know

17 Teenage Reading Statistics To Get You Thinking