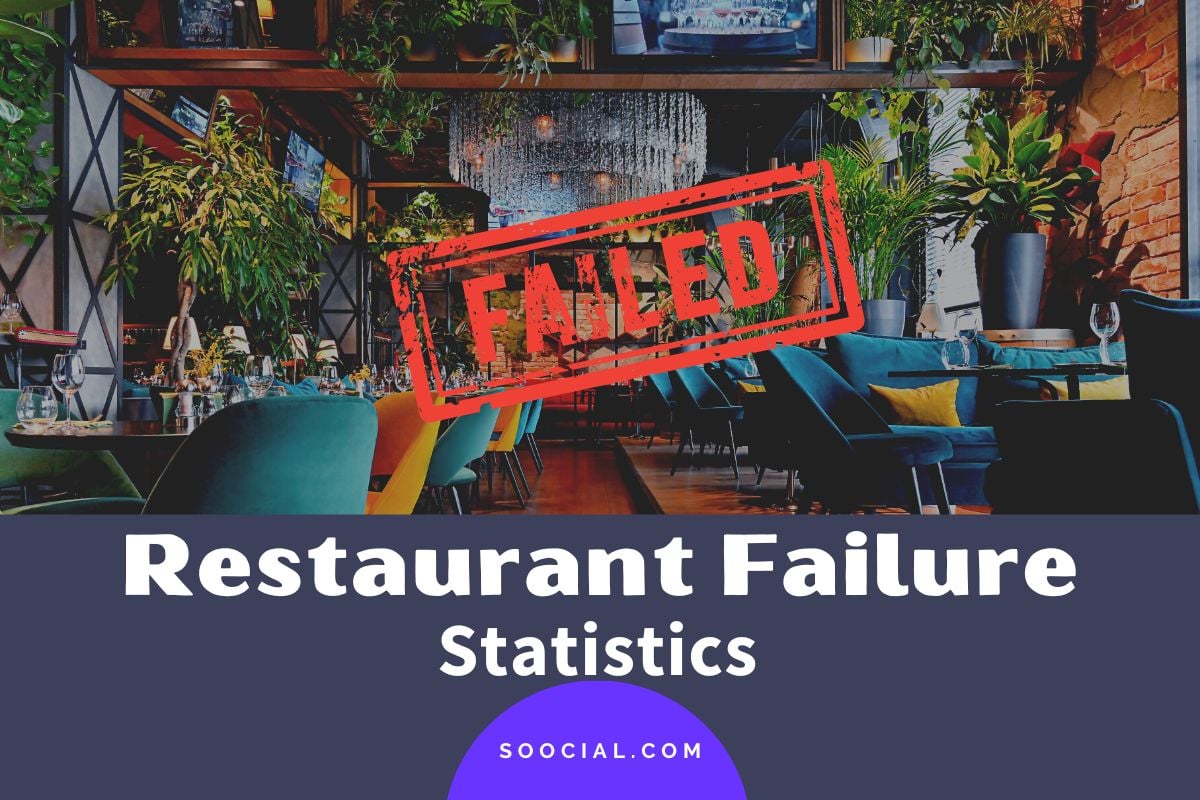 So, you’re thinking about opening your own restaurant. Congratulations! You’re about to embark on a journey that will be full of highs and lows, successes and failures, and all the good, bad, and ugly in between.

But before you get too far down that road, we need to talk about something: the odds of your restaurant failing. And they’re not great.

You’ve probably heard it said that restaurants fail at a rate of more than 90%. That’s a lot of failures, and it can be hard to take in. But what if we told you that wasn’t the full picture? What if there were other statistics—about restaurant failure rates—that didn’t make their way into the mainstream media?

We did some digging and put together this list of restaurant failure rate statistics—and we’re sharing them with you today because we want to help you succeed!

1. 17% of independently-owned, full-service restaurants fail during their first year of operation.

The above figure falls only two percentage points short of the one for service businesses in general, 19% of which fail during their first year of operation.

What’s more, standing at 4.5 years, the average lifespan of restaurants is slightly longer than the one of other businesses, which stands at 4.25 years.

2. 61% of independently operated restaurants fail within the first three years.

Only about 39% of independently operated restaurants survive for more than three years.

The reason for this high failure rate is simple: most of the time, people just don’t know what they’re getting into—they don’t understand the hard work and dedication that’s needed to make a restaurant successful. So many people open up restaurants without realizing how much work goes into it and without understanding what it takes to be successful when you’re working on your own.

But there’s good news! That doesn’t mean that you shouldn’t try—it just means that if you’re going to do it, you need to be prepared for all of the things that might stand in your way.

3. 80% of restaurants close within five years of opening.

If you’ve ever opened a restaurant, you know how difficult it is to keep your doors open. Not only do you have to compete with other restaurants in the area, but you also have to deal with all of the day-to-day challenges that come with running any business. So it’s no surprise that 80% of restaurants close before reaching five years of operation.

The statistics don’t lie: if you want to be successful in this industry, you have to be willing to work hard and put in long hours—and that’s not even including all of the research and planning that goes into starting up a new restaurant!

4. Each year, nearly 40,000 jobs are lost due to failed restaurants, along with $3.2 billion in lost capital investment.

Restaurants are a significant part of the American economy. There are more than 600,000 restaurants in operation today, and they employ about 11.2 million workers. That’s an enormous number of jobs!

A restaurant’s success depends on its ability to create an environment where guests feel welcome and comfortable, making it easy for them to relax, enjoy great food and beverages, and enjoy the company of family and friends.

But what happens when things go wrong?

Restaurant failures lead to the loss of nearly 40,000 jobs per year—and that’s just the tip of the iceberg. Not only do failed restaurants cause job losses, but they also result in lost capital investment of approximately $3.2 billion per year.

5. The median lifespan of restaurants with five or fewer employees stands at 3.75 years.

The above figure is slightly smaller than the one for other service businesses with the same employee count, which stands at four years.

When it comes to restaurants with 20 or fewer employees, their median lifespan is around three months shorter than other service businesses with the same employee count.

However, restaurants with 21 or more employees boast a median lifespan of around nine months longer than businesses in the service industry with the same number of employees.

In the first three quarters of 2021, however, the average number of quarterly closures dropped to 19,500, which is even lower than pre-pandemic averages.

7. 80% of restaurants that didn’t receive Restaurant Revitalization Fund support are at risk of permanent closure.

As of January 2022, 42% of businesses that didn’t receive RFF support are in danger of or have filed for bankruptcy. This compares to 20% of those who did receive RRF support. The corresponding figures in April 2022 stood at 40% and 25%, respectively.

Stats on Restaurants’ Most Common Challenges

8. 96% of restaurants faced supply delays or shortages of key food or beverage items in 2021.

What’s more, over 50% of restauranteurs think that business conditions won’t be back to normal for at least a year. On the other side of the spectrum, 51% of adults agree they’re not eating out at restaurants as often as they’d like.

9. Inventory costs were the greatest cause of strain for 33% of restaurants in 2021.

For equal portions of 30%, the greatest cause of strain were rent and labor costs. 1% of restaurants cited other causes of strain as their greatest, while 7% cited none.

38% opted to seek help from banks or take out small business loans, while 30% relied on their friends and family for support.

Online lenders and/or SBA-guaranteed loans were the way to go for 21% of businesses, while 20% opted for grants and 18% for Paycheck Protection Program loans.

14% relied on Employee Retention Tax Credits, while 9% opted for crowdfunding.

Only 2% of restaurant operators didn’t need any financial help staying afloat in 2021.

11. 5% of restauranteurs would like to but can’t cut down on labor costs.

Among those who do manage to cut down on labor costs, 44% opt for increased productivity, while 33% reduce their hours of operation. Equal 32%-portions of restauranteurs increase staff retention and create labor targets as methods of cutting down labor costs.

29% use restaurant scheduling software, 23% rely on POS sales data to predict scheduling needs, while 19% cross-train and/or repurpose staff as a way to cut down on labor costs.

COVID-19’s Impact on the Restaurant Industry

15. 62% of restauranteurs report accumulating additional debt since the beginning of the pandemic.

Another 57% say their restaurants have fallen back on expenses. 41% of restaurant operators who didn’t receive a portion of the Restaurant Revitalization Fund report taking out personal loans to support their businesses, which compares to 19% of those who did.

16. As of April 2022, 48% of restaurants that didn’t receive Restaurant Revitalization Fund support are on the verge of defaulting on a loan.

17. Between February 2020 and January 2022, 41% of restauranteurs that didn’t receive RRF support have taken out personal loans to support their businesses.

Another 26% of restauranteurs report selling a personal asset to support their business, while 11% took on new investors. The corresponding figures for restauranteurs are twice lower, at 19%, 10%, and 5%, respectively.

Namely, food and beverage sales in the restaurant and food service industry totaled $864.3 billion in 2019, dropping to $659 billion in 2020. By the end of 2022, however, sales are expected to reach $898 billion, exceeding the pre-pandemic figure by nearly 4%.

19. The average profit margin for restaurants with 20 seats or less dropped by three percentage points between 2019 and 2021.

20. 35% of restauranteurs say most of their suppliers increased pricing during the COVID-19 pandemic.

21. The number of employees in the restaurant and food service industry dropped by 46% between March and April 2020.

Gradually increasing from April onward, this figure reached 11.3 million in July 2021, which is 8% lower than the one of 11.7 million recorded in February 2020.

22. 81% of restaurants reduced their staff during the COVID-19 pandemic.

On the other side of the spectrum, 15% of restaurants had to let go of all of their staff during the COVID-19 pandemic.

23. 49% of restaurants that didn’t receive Restaurant Revitalization Fund support had to lay off staff due to the surge in the omicron variant.

This compares to 33% of restaurants that did receive RRF support. During the pandemic and up to January 2022, restaurants with no RRF support had to lay off 30% of their staff, on average, compared to 21% of those who received RRF support.

24. 75% of restaurant operators considered recruiting and retaining staff their top challenge in June 2021.

19% of restaurant operators considered recruiting and retaining staff their top challenge in March 2020.
Just one month later, in April 2020, no restaurants had recruiting and retaining staff on their list of challenges. Even though this figure indicates an immense month-to-month difference, it’s still 61% lower than the one recorded at the beginning of the same year, in January 2020, standing at 49%.

In May 2020, only 1% of restaurant operators considered recruiting and retaining staff their top challenge. This figure fluctuated since then, peaking at 75% in June 2021.

25. Equal 41%-portions of restauranteurs cite the fear of COVID restriction reinforcement and the fear of working with the public due to COVID as the main reasons for labor shortage in the restaurant industry.

The lack of skills ranks second, as agreed by 35% of restauranteurs. Equal 33%-portions of restauranteurs cite the competition from COVID benefits and the one of other restaurants as the main reasons for labor shortage. An overall smaller labor pool follows with 32%, along with the lack of interest in the industry with 31%.

The list is rounded by the competition by other industries with 27% and high turnover with 25%. 3% of restauranteurs cited other reasons for the recent labor shortage in their industry.

26. 90% of restaurant operators who expanded outdoor seating as a result of the COVID-19 pandemic plan to continue doing so post-pandemic if their jurisdiction allows.

By September 2020, 67% of restaurants offered outdoor dining. Dropping ever since, this figure resurfaced at 57% in April 2021. What’s more, 84% of adults are in favor of restaurants permanently setting up tables on sidewalks, parking lots, or streets.

27. 19% of adults stopped dining at restaurants due to the rise of the delta variant.

As a result of the rise of the delta variant, 60% of adults changed their restaurant use, and 37% ordered in instead of eating out. Another 20% chose to sit outdoors if dining out, while 9% canceled restaurant plans.

28. Due to the omicron variant surge, 88% of restaurants faced a demand decline when it comes to indoor premises.

For the same reason, in January 2022, 26% of restauranteurs reduced seating capacity, while 10% switched to an off-premise offer only.

29. 44% of restaurants added takeout/delivery options to their menu offering during the pandemic.

Another 42% expanded their existing takeout/delivery options, while 30% added grocery/pantry items. Equal 28%-portions added a subscription service and meal kits, while 14% made no changes to their menu offering during the pandemic.

30. 71% of restaurants introduced mobile payment options during the pandemic.

Another 70% opted for QR codes, while 54% introduced a tap-to-pay option. Only 6% of restaurants didn’t introduce any contactless payment methods.

31. 95% of restauranteurs report using one or more online ordering platforms.

32. 80% of restaurants had to modify their operating hours due to the omicron variant surge in December 2021.

46% of restaurants report that their business hours were modified for more than ten days during the same month. When it comes to the ways restaurants had to modify their hours, 51% reduced hours of operations on days they were open, while 34% closed on days they would otherwise be open.

33. 49% of restaurants report that their ability to do business has been affected by the cost and availability of COVID tests.

With all these restaurant failure stats, you may be wondering whether or not you should even start a restaurant. Although there are many challenges that come with running a restaurant, the rewards of owning your own business and being your own boss can’t be beat.

We hope you found this post helpful and that it has given you some ideas for success! If you have any questions or would like to share your experiences, please don’t hesitate to reach out. We’d love to hear from you.

Thanks for reading, and have a great day!

569 Fancy Restaurant Name Ideas to Get Everyone Talking

1221 Food Business Name Ideas That Nobody Can Resist