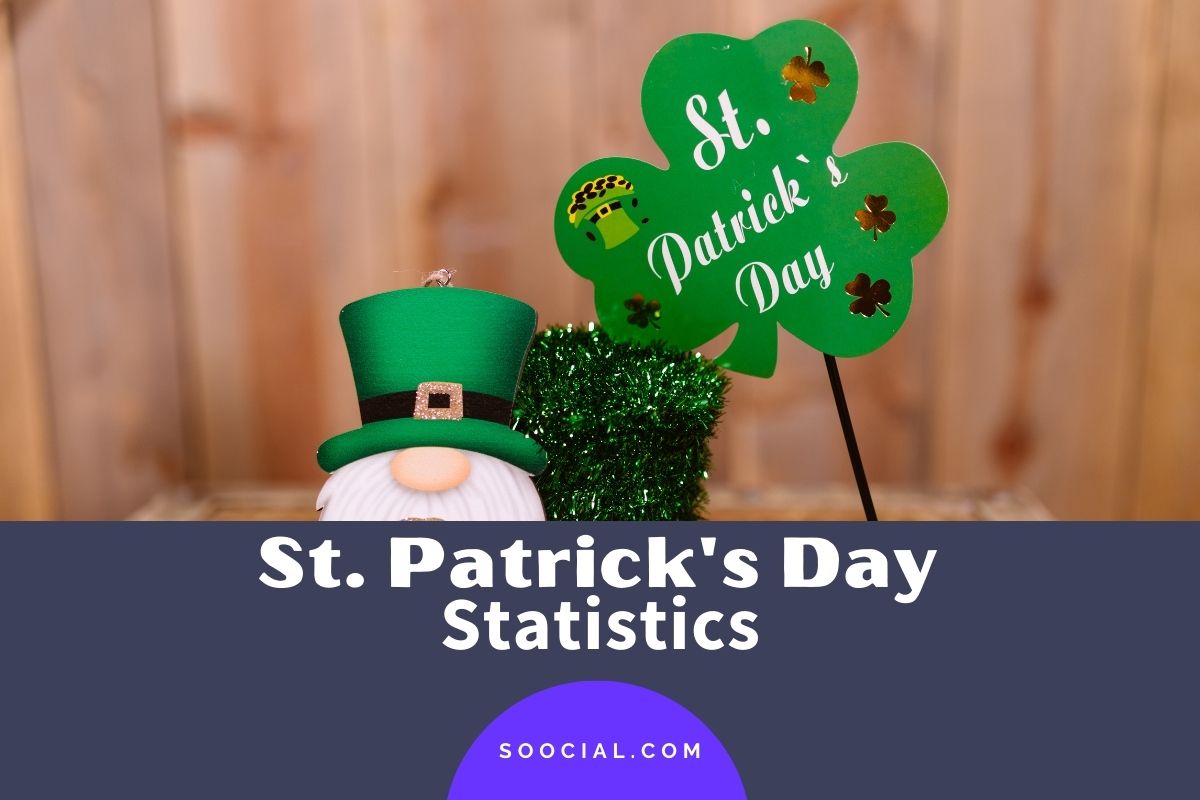 Ahh, St. Patrick’s Day. The one day of the year you can dress up like a leprechaun and get away with it.

St. Patrick’s Day originally started as a religious holiday in Ireland, but it has since become a celebration of Irish culture throughout the world. It’s a day to drink beer, wear green, and eat corned beef and cabbage.

But do you know how much money Americans spent on beer last St. Patrick’s Day? Or how many people will wear green this year? What about the average age of someone who attends a St. Patrick’s Day parade?

If you don’t know the answer to any (or all) of those questions, that’s okay! We have your back—we put together an awesome list of St. Patrick’s Day statistics that will bring out your inner leprechaun just in time for the holiday!

We were able to gather a ton of interesting stats about how people plan to celebrate and how much they plan on spending, as well as some insight into the long history of this holiday.

These are some of the most exciting and essential stats and trends regarding celebrating St. Patrick’s Day.

Who celebrates this fun holiday the most? What do people spend the most money on when preparing for St. Patrick’s Day celebrations? Is everyone really wearing green? Find the answers in the stats below!

Each 17th of March, a huge parade in Dublin, Ireland, marks the day. This four-day festival is a huge deal and often attracts more than 3,000 performers of all kinds, including musicians, poets, and dancers.

According to the latest numbers, over 100,000 overseas travelers join Ireland’s St. Patrick’s Day Parade, and there are about 400,000 total visitors. Besides this huge Dublin event, there are minor celebrations in nearly every Irish village and town too.

Many people don’t know that the first St. Patrick’s Day Parade took place in the United States. According to History.com, it happened on the 17th of match, 1601, in today’s St. Augustine, Florida. Yet, the celebration spread across the country, and now the most famous parade is the one in New York. Between 150,000 and 200,000 people join this event to celebrate the holiday. The number of spectators is an impressive 2 million.

People who celebrate this date love beer, that’s for sure. Namely, a recent WalletHub study showed that beer sales on the day jumped by 174%. The overall spirit sales grow by 153%. About 13 million pints of Guinness beer are consumed globally on the 17th of March.

Unfortunately, that results in some dark trends, as well. Namely, 57 people were victims of drunk-driving crashes during the holiday back in 2019. Meaning, one life was lost every 38 minutes. Nearly two-thirds of all car crashes on the day of the holiday involve a drunk driver.

4. St. Patrick’s Day is the third most popular drinking day.

And when the focus goes on beer drinking, St. Patrick’s Day is actually the world’s most popular holiday. The average number of drinks consumed per person on the day is 4.2. Nearly one-third of men who celebrate the holiday admit to binge drinking.

5. St. Patrick’s Day is celebrated around the world.

While the parades in Ireland and the United States are the most popular ones, this date is marked globally. Canada and Australia are two other countries with significant celebrations and unsurprising mentions. Yet, what if we told you that Russia, Japan, and even Singapore have celebrations on the special date.

Besides beer, which seems to be the top pick for St. Patrick’s Day, other traditional recipes include corned beef, cabbage and champ, and soda bread. Wearing green remains the signature move for both clothing and decorations regardless of the country where the day is celebrated.

6. Chicago River turns green thanks to 60 lbs. of green dye.

Ever since 1962, the Chicago River has been colored green for the St. Patrick’s Day celebrations. For this purpose, 60 lbs. of green dye gets thrown into the water. The effect lasts for five hours and costs about $133 per minute. This event attracts about 400,000 spectators every year.

The famous pot of gold of the leprechaun contains 1,000 gold coins, one ounce each. Therefore, the pot’s value is about $1.92 million. If the value of the gold keeps increasing as it’s been doing for the past few years, the leprechaun may get even richer.

This number has grown significantly since 2009, when only 44% of the population celebrated the holiday.

There was a surge in interest in St. Patrick’s Day in the years after, with about 52% of Americans celebrating the holiday in 2011.

For example, in 2009, Americans spent only $3.29B on the day. Compare that to last year, when the number jumped to $5.14B. However, the year that saw an overall highest spending was 2020 when Americans splurged $6.16B for the holiday.

Unsurprisingly, that was also when Americans spent the highest average per person on the holiday season, at $42.96.

A closer analysis of this data depicts Americans gradually splurge more each year on the holiday.

In 2009, people spent just $32.80 on average, and the number continues to grow. The number reached its peak in 2020 when people spent roughly $42.96. It’s safe to assume the pandemic probably played some role in this.

Between 2009 and 2022, the average per person spending increased by 29.05%. And all current spending trends suggest that the increase isn’t going to slow down anytime soon.

Americans love partying for this special date. Hence, the only years when the spending is down are the years when there are economic or health crises. So, it’s highly likely that US consumers will break the 2020 average spending record as soon as 2023.

The most common way to commemorate the holiday is to dress in green. Of course, the general public also had other ideas for celebration.

Around 34% of Americans prepared a special dinner, making this the second most popular choice. Roughly 26% of the celebrators decorated their homes or offices, and 19% attended a party. However, people were least eager to host one themselves, as only 10% of Americans did so.

When it comes to celebrating styles and trends, things have been pretty much identical over the years. Americans like to wear green, attend parties, decorate their homes, and go to restaurants. Yet, due to the global COVID-19 pandemic, there’s been a shift in the way people celebrated the date in 2021.

The share of Americans who attended a private party also dropped and went from 19% in 2020 to 13% in 2021. This same trend was noticed among those who attend parades as this figure decreased from 15% to only 6%.

St. Patrick’s Day has always been a designated holiday for drunken escapades. Still, only 46% of Americans celebrated this way. Instead, over half of the population preferred food over beverages.

Around one-third of Americans purchased clothing or accessories, and just 28% spent money on St. Patrick-themed decorations. Barely 19% of Americans indulged in candy for the holiday.

Gifts remain the least popular option – only 6% of the population surprised someone with a present.

This number is slightly higher than the 53% of men who expressed an interest in celebrating the holiday.

Of course, everyone had their own ideas on how to celebrate.

Around 85% of men and 74% of women wanted to commemorate the day by wearing green. Making a special dinner was the second most popular way of celebrating, with approximately 30% of men and 38% of women following suit.

However, only 11% of men and 8% of women said they planned to host a party.

15. Men are the bigger spenders when it comes to celebrating St. Patrick’s Day.

The latest 2022 stats show that women are more into celebrating St. Patrick’s Day as 55% of them do so compared to 53% of men.

Yet, men are the primary spenders as the average expenses per person among them was $46.88. Women, in comparison, had a much lower average spend of $38.

Roughly 35% of women and 28% of men spent money on apparel and accessories, making this option the third most popular.

Decorations were also popular, with 32% percent of women and 23% percent of men purchasing them. However, Americans weren’t too keen on gift-giving, as only 5% of women and 6% of men bought gifts.

Below, we’ll list the average spending by age group and see who enjoys celebrating St. Patrick’s Day the most and who celebrates it the least.

The latest figures released by the NRF reveal that those between 25 and 44 spend the most, with the age group 35-44 being the biggest spenders. By contrast, Americans aged 65 and over don’t seem to splurge lots of cash for this holiday.

This number almost came to a tie, as 65% of the population aged 35-44 reported interest in celebrating.

Young adults were the third demographic most likely to celebrate the holiday at 64%. This age group was followed by those aged 45-54 and 55-64, of which 54% and 46% had plans for St. Patrick’s Day, respectively.

Adults over 65, unsurprisingly, were the demographic least inclined to celebrate, with only 37% expressing such desire.

Only around a quarter of this age group attended a private party, and only 15% held one themselves. Instead, three-quarters of American adults chose to wear green to commemorate the festival.

Decorating the home and the office was somewhat trendy, with around one-third of the population doing so. Roughly 30% of Americans celebrated from the comfort of their home and made a special dinner.

20. More than half the American youth mostly purchased food for St. Patrick’s Day in 2022.

The second obvious choice was beverages, as 51% of Americans aged 18-24 rushed to the liquor store. Buying apparel and accessories is also a rising trend over the years; just less than half of young adults visited boutiques and jewelry stores.

Over one-fourth bought decorations, and 23% of the youth purchased candy. Unsurprisingly, greeting cards were the least favorite choice, as only 5% of young Americans bought one.

This region was most keen on celebrating the holiday, as more than half of Northerners made plans. Roughly 52% of Midwesterners marked and splurged around $42.23 individually. Americans from the West partied the hardest but spent the least per person – $41.52.

Finally, more than half of Southern Americans celebrated St. Patrick’s Day. They splurged approximately $41.53 on average.

More than three-quarters of Westerners also sported green attire, indicating that this is a growing trend.

The second most popular way to celebrate was to make a special dinner. Around 40% of North-eastern Americans prepared a delicious meal for St. Patrick’s Day. One-third of Midwesterners decorated their homes and offices instead.

We hope you’ve enjoyed our look at these St. Patrick’s Day Statistics!

There are a LOT of interesting facts and statistics about St. Patrick’s Day out there. Did you know that St. Patrick was actually British? I didn’t until I started researching this post!

We’ve learned there are a lot of interesting facts about this day and its festivities, including the number of people who celebrate it, how much money they spend on it, and how many pints of Guinness are sold each year in honor of the holiday.

Now we’re DYING to know: what are your favorite ways to celebrate this wonderful holiday? Do you have a special family tradition for St. Patrick’s Day? Whether you’re Irish or not, let us know by contacting us!

Until next time, happy St. Patrick’s Day, and may the odds be ever in your favor!

251 Christmas Tree Business Names to Get the Spirit Going

266 Beer Slogans and Taglines that Get the Party Started