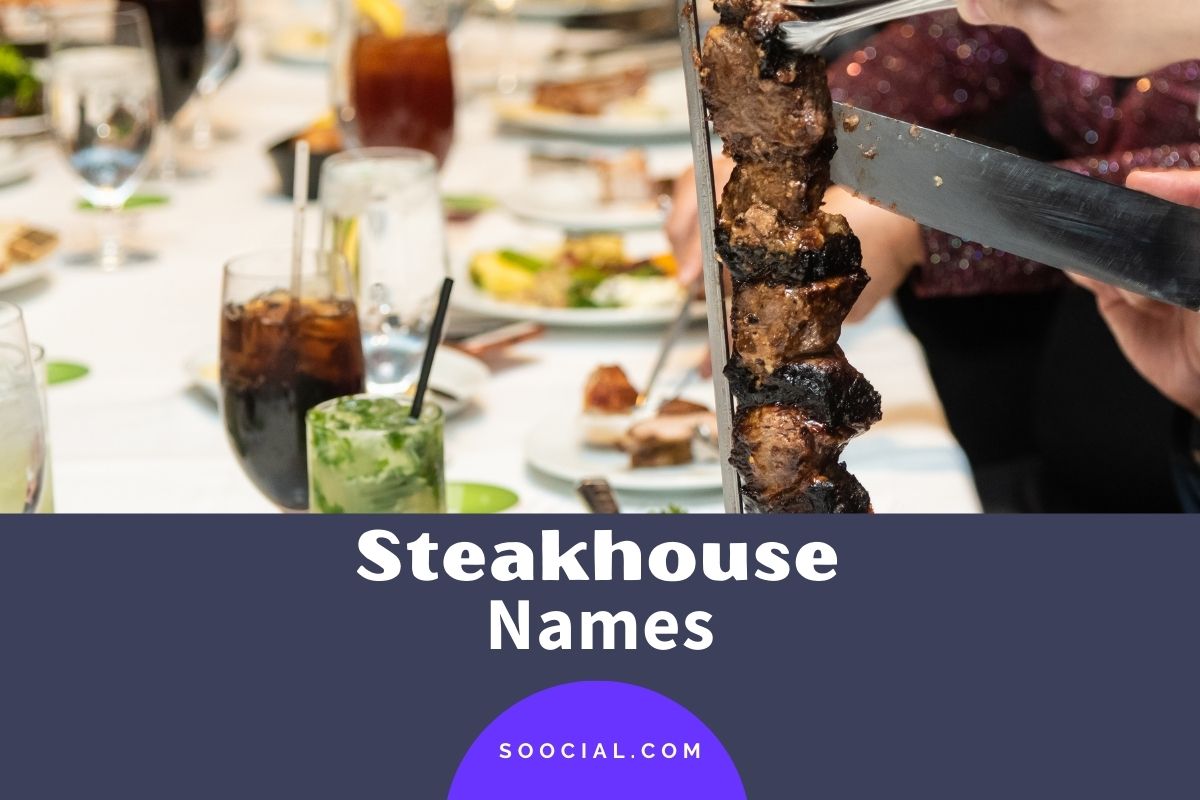 Are you in the process of opening a steakhouse but can’t decide what to call it? Well, look no further. We scoured the depths of our imagination to bring you a huge collection of eye-catching steakhouse name ideas that’ll get your creative juices flowing and kickstart your brainstorming process.

Americans love steak. Just the mere mention of the word out loud makes most people’s mouths water. A piece of juicy meat perfectly seasoned with salt and pepper is like an instant party for your taste buds.

Steakhouses (also known as chophouses) are restaurants that specialize in steaks and are very popular in North America. They are regarded as the premier destinations for special occasions, whether it be a birthday, anniversary, or just because you feel like treating yourself.

They are usually sit-down types of restaurants that have a nice ambiance, good food and service, and a list of wines for customers to choose from. Additionally, these restaurants include a bar so their customers can visit this part of the restaurant before or after the main dinner service.

The steakhouse business is a growing industry, especially here in the United States. Prices are rising, but the demand grows ever larger. This makes it a great business opportunity that can be highly profitable as long as you do your homework.

When starting a steakhouse, the first crucial step is to find an attractive name for it. Naming a steakhouse is a delicate task. The goal of a good steakhouse name is to simultaneously convey an air of sophistication and luxury while also framing an experience people want to be a part of.

The high dollar menu means you have to have a killer name–something memorable and mouth-watering. To make things easier for you, we’ve gathered plenty of interesting Steakhouse name ideas to get your kitchen grilling!

So, without any further ado, let’s begin.

What’s in a name? A lot! The name of your steakhouse will make a huge impact on your business. It might sound silly but the moment someone hears the name of your restaurant, they’ll have some kind of idea of what your restaurant is like. Therefore, it’s important to come up with an eye-catching name.

Now, what makes a name catchy? Most importantly, it must evoke an emotion. It must gently tickle your funny bone, excite you, make you hungry and curious. That’s the only way you’ll remember the name when someone recommends it to you.

Soocial has been helping small business owners, entrepreneurs, and startups with their branding for over ten years. Our team has worked with a lot of different industries. For this section, we decided to dig deep into our vault and pull out a few gems from our steakhouse naming portfolio.

We won’t guarantee you’ll be setting up your next steakhouse with one of these names, but hopefully, they’ll get you thinking in the right direction!

Steak. It’s the term that gets people salivating at the mere thought. Red meat, yummy, cooked on a grill with lots of veggies, delicious!

Running a steakhouse is obviously an awesome business to be in but naming it is one of the harder things to do. You want it to sound exclusive and upscale but not too pretentious. Having a cool-sounding name will create a positive ripple effect that leads to more customers and more success.

We’ve searched high and low to gather a bunch of cool steakhouse name ideas to inspire you. Hopefully, this list will serve you well and help you think of a cool name for a steakhouse restaurant.

Warning: Steak lovers, beware! You might just salivate when you see the following list of steakhouse name ideas.

Naming a Steakhouse can be a time-consuming task, especially since first impressions are important. You’ve got to come up with something that makes customers think of warm, tender meat and the delicious sauces that compliment them perfectly.

Not only do you want to appeal to your target audience, but you also want to stand out amongst competitors. The name should reflect the experience you plan to offer guests.

With that in mind, we’ve listed below some creative steakhouse name ideas. Scroll down and take a look. Some are downright silly, while others are clever to the point that people would want to eat at your restaurant immediately.

Dinner and a show! What is more entertaining than a Brazilian Steakhouse? You ingest copious amounts of meat and watch men dance on giant skewers.

Eating at a Brazilian steakhouse can be a lot of fun. They’re a unique dining experience, and when you’re finished, you won’t be able to eat for the rest of the day.

You’ve decided to open a Brazilian steakhouse, but you’re stuck for a name. A truly memorable name can really mean the difference between marketing success and failure – so the stakes are high – but don’t worry, we’ve got you covered.

Unfortunately, most restaurants lack the potent combination of name, theme and food that will woo patrons into their lair.

Here are some awesome Brazilian steakhouse name ideas for your review. You can use them as inspiration to help you come up with the perfect name for your restaurant.

Steak is delicious. And if it’s prepared by a talented chef at one of the Japanese Steakhouses, then you’re really in for a treat. While there are literally thousands of steakhouse restaurants across America that serve up some quality meat, only a limited number of them are known as Japanese-themed establishments.

If you’re planning to open a Japanese Steakhouse, the first step is to pick an attractive name for it. It’s probably one of the first impressions people will have of your restaurant. It has everything to do with how you are perceived in the marketplace. So choosing a name for your Japanese steakhouses is not something you want to rush into!

We put our heads together and came up with some super creative Japanese steakhouse names for you to choose from. We hope they help you find a well-fitting name for your Japanese-themed steakhouse.

You’ve finally made the decision to open an Italian steakhouse restaurant. Now it’s time to name your restaurant. You have to come up with something that is easily marketable, sticks in the memory of customers, and isn’t already being used by a competitor. It has to roll off the tongue and resonate with the target audience.

There are plenty of Italian Steakhouses around in major cities of the US, but not all of them have memorable names. A memorable name matters because it will catch the attention of potential diners and allow them to remember who you are and what you serve.

Keeping this in mind, we’ve gathered some amazing name suggestions for your Italian-themed steakhouse. Take a look!

The name of your restaurant is one of the most important decisions that you’ll make. A good name requires a lot of thought and effort. Expectations are high when you offer customers fine-dining service, delicious food, and the finest drinks. Need help naming your steakhouse? Don’t worry! We’ve already done the hard work.

Check out this list full of fancy steakhouse name ideas that will easily draw the attention of potential customers with deep pockets.

While we were searching for name ideas, we stumbled upon a Steakhouse Name Generator. It is an AI-based tool that helped us generate a list of good name suggestions for a steakhouse. Here, have a look!

So, there you have it. You now have hundreds of catchy, cool, and creative steakhouse name ideas to help you get started on your steakhouse naming journey!

Remember, the name of your steakhouse greatly affects its public appeal and image, and it may even determine what kind of clientele frequent your establishment. Therefore, don’t rush through the process and choose wisely. Once you find an ideal name, embrace it, own it, and let it speak to your prospective customers!

Thanks for visiting our website and reading this article! We hope you enjoyed it and it helped you find a suitable name for your steakhouse.

If you liked this article, please share it on social media. It’ll help us reach more people and increase our reader base. Please drop us an email if you have any suggestions or feedback!

Thank you very much for your time!