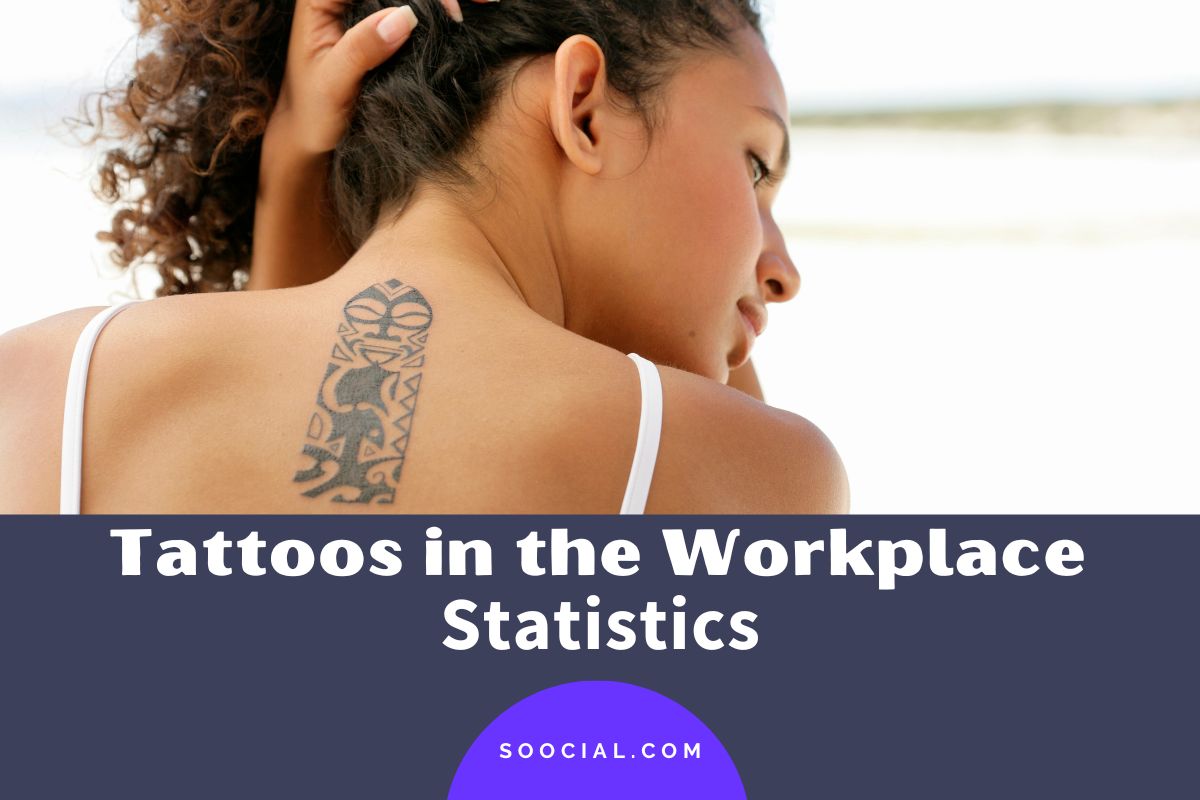 You’ve probably noticed that tattoos are all the rage these days. It’s not just your kid sister with a few stars on her ankle—it’s people from all walks of life getting inked up.

So what does this mean for workplaces? Well, it means that many companies need to update their policies on tattoos in order to stay competitive and attract top talent. But as it turns out, there isn’t much information out there about how many workers have tattoos (and where they are) or how employers should handle employees’ ink when hiring and firing.

That’s why we collected data from numerous surveys and studies on tattoos in the workplace and compiled it into one comprehensive list so that you can easily find everything you need in one place!

Tattoos in the Workplace Statistics (Highlights)

Tattoos in the Workplace Acceptance Statistics by Demographics

1. 94% of female workers say there is nothing wrong with employees showing their tattoos at the workplace.

However, their answers to some of the other questions in the survey reveal that they don’t expect everyone else to be as accepting as them. For example, 21% of female workers say they would be nervous if they had to disclose their tattoos to their employer.

Moreover, 32% of women say they decided not to get a tattoo because of the line of work they are currently in or hope to become a part of later in their career.

2. Only 22% of people between 18 and 25 consider tattoos at the workplace inappropriate.

This shouldn’t come as a surprise, as young people are more likely to have tattoos, so it makes sense that they would approve of them. The stats show that 21% of the 18-to-25-year-olds are tattoo owners, and only people in the 26 to 32 age group are more likely to be tattooed, with 22%.

In contrast, less than 1% of the people older than 60 are inked. This is a likely reason why a whopping 63% of them consider tattoos at the workplace distasteful.

3. 55% of the people with PhDs consider visible tattoos in the workplace unfitting.

The statistics show that the higher the education level of the individual, the less likely it is for them to have tattoos or find them acceptable in the workplace.

Namely, only 3% of respondents with PhDs have tattoos, and their percentage increases to 8% for people with master’s degrees.  Furthermore, 10% of people with bachelor’s, 19% with associates, and 20% with high school diplomas are inked.

So naturally, the percentage of high school graduates who find visible tattoos in the workplace inappropriate is considerably lower, at 38%.

4. The disapproval rate of visible tattoos in the workplace is the highest in the South West Central region of the US (OK, TX, AR, LA) with 55%.

A recent survey reveals that the disapproval rates of visible tattoos in the workplace are not the same across different regions in the US.

Furthermore, 41% of the people in the South East Central (KY, TN, MS, AL) find visible tattoos in the workplace not acceptable, while their share in the Mid Atlantic (NY, PA, NJ) is 38%, which is the same disapproval rate for people outside of the US.

5. 81% of parents with underage kids are comfortable with coaches having visible tattoos.

Moreover, 39% expressed their attitude towards inked coaches as extremely comfortable.

Tattoos in the Workplace Acceptance Statistics by Industry

6. Millennials are the most accepting of visible tattoos in the workplace of any generation

7. 86% of the general public say they are comfortable with athletes having visible tattoos.

According to the statistics, athletes have the most acceptable occupation to have visible tattoos, as only 14% of the population say they are uncomfortable with that. Similarly, 81% of the public are fine with IT technicians, and 78% have no problem with chefs having visible tattoos in their workplaces.

However, there are some professions in which larger parts of the public believe visible tattoos are not acceptable. For example, 41% of Americans say that if a primary teacher shows up at work with a visible tattoo, it will make them uncomfortable, and the same percentage feel that way about a judge.

A presidential candidate is an occupation where most people wouldn’t want to see visible tattoos, with 42% not being comfortable with it.

8. 67% of the workers in the agriculture and ranching industry find visible tattoos in the workplace inappropriate.

Moreover, the stats show that 20% of the hospitality, tourism and recreation employees are inked, while their share in the arts, media, and entertainment sector is 16%.

The lowest percentage of tattooed employees, or 8%, are government officials, while their share is 9% in the IT, engineering, design and construction, energy and utilities, and manufacturing industries.

9. 70% of Americans believe that it is acceptable for waiters and waitresses to have visible tattoos.

Additionally, 20% find it unacceptable, while the remaining surveyors don’t have a strong opinion on the matter.

The stats further reveal that 62% of the US population approves of police officers with visible tattoos, while the approval rate drops to 56% for top managers. Furthermore, 54% of the population believe that it is okay for teachers and 52% for doctors to have visible tattoos.

Lawyers and news anchors get the same approval rate of 49%, while the two occupations where the lowest percentage of the public accepts visible tattoos are politicians and judges with 46%.

10. 76% of Americans believe that visible tattoos or piercings during a job interview hurt their chances of landing a job.

The good news is that only 4% of the employees who actually have visible tattoos and/or piercings say they have been discriminated against because of their body art at work.

11. 61% of HR decision-makers say they are substantially less likely to hire a candidate with a face tattoo.

In addition, 17% say they are slightly less likely to hire a candidate with a face tattoo, while another 17% say that it would not make any difference.

The stats show that face tattoos are the most likely to affect the job chances of candidates, though neck tattoos aren’t overly appreciated as well. Candidates with tattoos on their necks are substantially less likely to land the job, according to 40% of HR executives, while 26% say it will slightly impact their decision.

Tattoos on the lower back are generally the most acceptable, as a total of only 14% of HR executives say they are either substantially or slightly less likely to hire candidates with such tattoos, while they make no difference for 78% of them.

12. 77% of employers say are unlikely to hire someone with tattoos.

Moreover, 35.08% believe that the likelihood of an inked-up candidate getting the job depends on which position they are trying to fill. Additionally, the placement and number of tattoos make a difference for 28% of the employers.

According to these stats, in total, about 77% of employers could potentially refuse a candidate because of their body ink.

Negative Effects of Tattoos in the Workplace Statistics

13. 22% of senior managers believe that visible tattoos in the workplace are unacceptable.

Even though 91% of the senior managers believe that workplace etiquette rules have loosened up in the last decade, there are still certain behaviors that won’t be tolerated.

The largest percentage of senior managers, or 54%, consider using foul language in the workplace unacceptable, while 48% won’t stand for displaying political signs at the office.

On the other hand, the statistics show that visible tattoos at the workplace aren’t that big of a problem, as 35% of senior managers say they were bad etiquette in the past but are no longer considered as such nowadays.

14. 2% of women workers report that they have been fired from their job because of their tattoos.

In addition, 11% of women say that having tattoos has prevented them from landing a job they have applied for in the past.

However, some employers would employ tattooed women but ask them to cover their tattoos during work hours, with 19% of female workers saying this has happened to them.

Finally, 15% of tattooed female employees say they experienced discrimination in the workplace because of their tattoos, and not just from their coworkers but from customers and clients as well.

15. 38% of the people who remove their tattoos say they do it in order to pursue a new job or a career.

Job aspiration is of the top six reasons that people who remove their tattoos give to explain their decision.

Most of them, or 58%, say they just decided to remove their tattoo, while 57% say they suffered embarrassment because of it. Another portion of 38%, besides job seekers, decide to do it because of lowered body image, and 37% say they do it because it causes them problems with their clothes.

Unfortunately, there are also 25% of people who say they removed them because of the stigma around tattoos, which caused bad experiences for them.

If you’re a tattooed employee, we hope this article gave you some useful information about how common tattoos are in your industry and how people feel about them.

If you’re a hiring manager or HR professional, we hope this article helped you understand more about tattoos in the workplace.

And if you’re just an interested observer, we hope this article was interesting! We think tattoos are really fun (and in some cases, really beautiful) so we wanted to share what we’ve learned with you.

If there’s any topic you’d like to see us cover in future articles, let us know about that too! We love hearing from our readers, and we want to make this blog as useful for you as possible.

Thanks for reading, and happy tattoo-ing!

26 Why Employees Quit Statistics That You Should Know