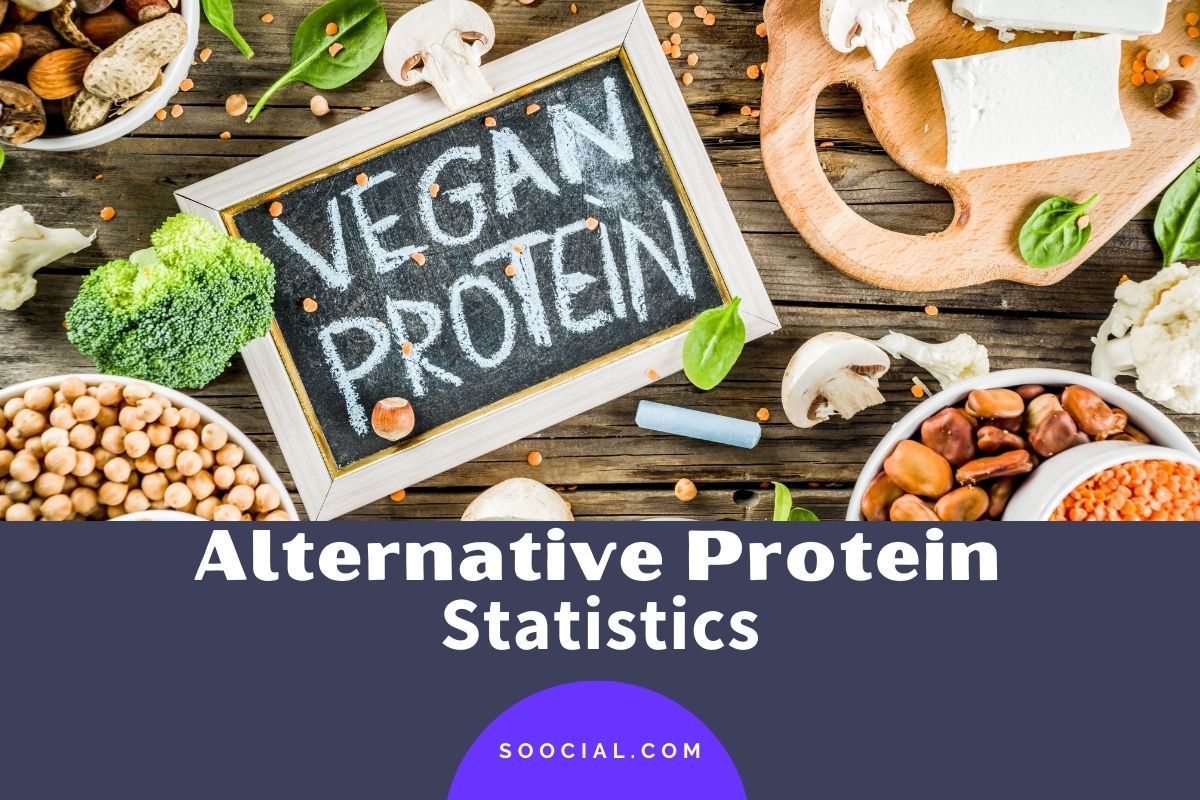 This plant-based substitute to animal protein is seeing an increase in demand as more and more people become aware of its numerous benefits.

Let’s dive into the numbers and see where the world stands on consuming alternative proteins.

1. One portion of a vegetarian-based alternative protein product contains 1.36 grams of salt.

One of the most positive aspects of alternative protein is the amount of salt in each product. Namely, a piece of vegetarian Chicken Chunk has almost four times less than the required daily intake.

What this means is, high salt intake can increase the risk of stroke, high blood pressure, and cardiovascular diseases.

Nutritionists and scientists advise people to consume food that contains a low salt value, and alternative protein is ideal.

2. Only 4% of all plant-based products are low in sodium.

According to a report on the nutritional value of over 150 plant-based products, only 4% had low amounts of salt.

Even though it is advisable to consume products with low sodium value, it appears there is only a handful available.

Just a little less than a quarter of plant-based products contain a vital nutrient in the form of vitamin B12.

This vitamin is one of the eight B vitamins and helps keep our body’s nerve and blood cells healthy, while also making DNA.

The recommended dose for consumption in adults is 2.4 micrograms and these vitamins are safe even if consumed in higher doses.

4. 63% of products on the supermarket shelf include an on-pack claim about protein.

5. Approximately $2.1 billion has been invested in plant-based technologies.

Investments in plant-based technologies have seen a rapid increase between the period of 2010 and 2020.

Contrastingly, about $1 billion have been invested across cell-cultured technologies during the same period.

With a combined $3.1 billion, this growth succumbs to questions about sustainability as the standardization of these technologies is not easy at all.

6. 14.5% of GHG emissions on a global level come from livestock production.

Livestock production is one of the largest contributors to deforestation due to the heavy need for soy production and cattle ranching.

With 14.5% of global emissions being caused by this sector, alternative proteins are becoming key players at a time when there are increasing concerns about global food and nutritional security.

7. Venture capital’s investments in alternative protein amounted to $1.5 billion in 2020.

According to this report, in 2020 alone venture capitalists have invested roughly $1.5 billion in research and production of alternative protein.

This type of investment is making the alternative protein industry incredibly visible. Moreover, that money almost doubled compared to 2019, seeing an increase of up to 80% in investments.

How does the alternative protein market fare across the globe, though?

Let’s find out below.

8. In 2020 there were a total of 44 fermentation companies around the world.

The number of fermentation companies that are focusing on alternative proteins has increased by an outstanding percentage of 91 in just a little over a 12-month period.

Many of these companies are producing fermentation-derived alternative protein products to meet the growing demand, but also to stay competitive within this highly progressed industry.

Just as the number of companies keeps on rising, so does the value of this market. Namely, by July of 2020, these companies managed to raise $435 million in venture capital, which is a staggering 58% increase compared to the year before.

Even Bill Gates saw the potential of the need for alternative protein and invested about $80 million into Nature’s Fynd.

It appears that Japanese folks are widely considering the switch from animal-based proteins to alternative ones.

According to this report, nearly half of all under 19 year-olds have tried consuming food containing alternative proteins.

The highest percentage is evident among 60+ year-olds, as 78.5% have tried alternative sources.

Here’s a breakdown of the people who tried food and drinks containing substitutes for animal proteins:

12. By 2030, the Asia-Pacific region will dominate the alternative protein market.

According to some estimates, the Asia-Pacific region is going to dominate the plant-based protein market within the next eight years.

With an estimated population of about 5 billion by 2030, it’s no surprise that the Asia-Pacific region is welcoming alternative protein solutions with open arms.

Experts believe that plant-based alternative proteins are going to dominate the market as people are becoming increasingly aware.

Latin America is projected to reach $8.8 billion in alternative protein products sales, with Africa and Middle-East regions also expected to see an increase, with predictions placing the value of this market at $8.2 billion by 2030.

14. Beyond Meat is the leading company with a net worth of $9 billion.

The California-based company producing alternative-protein products is the highest valued company in this sector.

In second place comes Impossible Foods, another California-based company, with a value of $5.2 billion.

These companies offer products intended to replace meat patties in direct competition with each other to get on top of this market.

15. Oatly, one of the most successful companies in the alternative protein space, is worth $2 billion.

With a value of $2 billion, it sits in third place far behind the biggest competitors in the world, Beyond Meat, and Impossible Foods.

Food habits, such as consuming dairy, meat, eggs, and seafood, are expecting to see a change into alternative protein plant-based substitutes.

Consumers are switching from their old food diets to more growing and sustainable alternatives. And this will be reflected in the years to come as experts believe this market will grow to reach 11% of the total global protein market.

17. Alternative protein consumption is estimated to grow to 3% by 2025.

Experts believe this number will continue to grow, and we should expect that by 2025, a compound annual growth rate of 3% or reaching 97 million metric tons.

According to recent reports, evaluations, and analysis, this market is likely to reach just south of $300 billion in mid-2030s.

This is an incredible and mind-blowing number, to say the least, as experts dub it an “unparalleled growth”.

The demand for such products continues to rise, and the future looks bright for the alternative protein market.

Latest data suggests the demand for alternative proteins is going to increase tenfold. This means that by 2040, the market could occupy an astonishing 60% on a global level.

The total value is estimated to reach $1.1 trillion as numerous other companies are likely to enter the fray and vie for a piece of the cake.

20. Plant-based substitutes could save up to 39 billion cubic meters of water.

Shifting to plant-based substitutes from eggs and meat alone could save the earth a substantial amount of water usage.

And with earth’s natural resources in dire condition, this move could turn out to save our precious assets for our own benefit.

Namely, with the introduction of alternative proteins, its full implementation may lead to saving up to 39 billion cubic meters of water. Interesting enough, this amount is enough to supply London for the next 40 years.

21. Approximately 1.8 billion people will live in inadequate regions with low freshwater supplies by 2025.

Earth’s natural resources aren’t the only things in dire condition. Data shows that within the next three years, close to 1.8 billion people might end up living their lives in regions where freshwater supplies are considered a commodity rather than a necessity.

This fact alone shows us just how vital the alternative protein market is for the whole world. With that in mind, it’s no surprise the demand is growing to new heights with each passing day.

22. Egg alternatives will dominate the market in the next three years.

The latest reports on the consumption of alternative proteins per product indicate that egg alternatives will note the highest growth rate of all products.

With a 68% increase over the next three years, consumers’ focus is turned toward egg alternative proteins. Over the next five years after that, in the period between 2025 and 2030, this demand will see an even higher growth rate, or 79% to be precise.

23. Cheese and fresh dairy are second and third on the scale of high demand.

Consumption of alternative cheese products will increase by 40% over the next three years, and by 50% between 2025 and 2030.

Fresh dairy products will record steady increases of 36% by 2030, as this market share is expected to reach parity and continue expanding over the next eight years.

We’ve looked at all the data, and now that we’ve got it all laid out in front of us, it’s time we talked about what it means.

The food industry’s capability to innovate and adapt to trending demands is impressive. This initiative for more sustainable diets reflects a rise in the market for alternative proteins.

As we can see by the latest alternative protein statistics, these products are becoming more available to consumers. This, in turn, can actually help relieve the pressure on the food system.

Yet questions still arise about these products’ nutritional value and how they can help move us toward worldwide food security.

Overall based on the recent alternative protein statistics and predictions, this market will exceed all expectations in the future, as demand continues to increase exponentially.

That’s all for now.

We’re looking forward to showing you more data-driven content in the future.

In the meantime, check out our other article about 20 Eye-Opening Plant-Based Meat Statistics