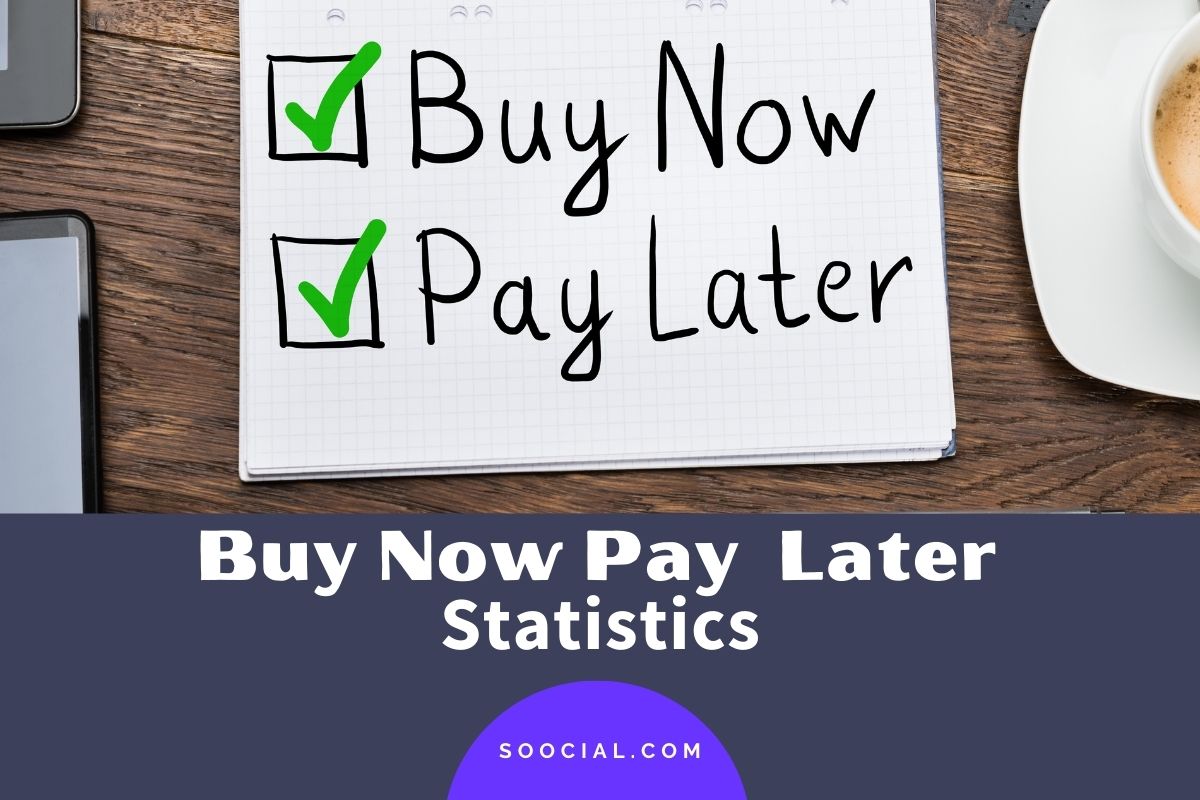 Shoppers have flocked to the flexible purchasing service over the last couple of years, driven by the uncertainty of the pandemic.

Currently, the BNPL market is set to reach a value of around $3.98 trillion by 2030. Analysts attribute the rising popularity of the solution to everything from a younger customer demographic to lower credit card limits.

Contents show
Buy Now Pay Later Statistics
1. The Buy Now Pay Later Market is growing at a rate of 45.7%
2. 55.8% of consumers are using BNPL Services
3. Gen Z BNPL customers have grown sixfold in the US
4. BNPL options increases conversions by up to 30%
5. Customers use BNPL to conserve cash (and buy things they can’t afford)
6. 51% of customers used BNPL during the pandemic
7. The average transaction is worth $104
8. UK shoppers racked up £3.3 billion in debt over Christmas 2021
9. Almost a third of BNPL users have made a late payment
10. 56% of people prefer BNPL services to credit cards
11. 84% of luxury shoppers want BNPL services
12. 65% of BNPL shoppers make repeat customers
13. Credit card issues cause increased demand for BNPL services
Conclusion
Sources

The following stats highlight just how significant BNPL has become for modern customers.

Allied Market Research’s recent report on the Buy Now Pay Later market reveals just how valuable the industry might be. The study, conducted in 2021, found the market is set to reach a value of $3.98 trillion by 2030. That’s a huge increase from only $90.69 billion in 2020.

If the BNPL industry lives up to expectations, it will be growing at a CAGR of 45.7% in the forecast period. This makes Buy Now Pay Later one of the fastest-growing financial services around.

Interestingly, the report also found the “POS” (Point of Sale) segment would achieve the fastest growth, of 49% up to 2030.

The Ascent (a financial analysis branch of the Motley Fool) found more than half of consumers are using Buy Now, Pay Later services today. That’s a massive increase from 37.65% in July 2020.

In less than a year, numbers have shot up, and they’re likely to continue growing. The Ascent’s study also found 53% of people who had never used a BNPL service before were planning on sourcing one within the next year.

3. Gen Z BNPL customers have grown sixfold in the US

Younger customers seem to be some of the most likely people to embrace BNPL services. While millennial use of Buy Now Pay Later offers doubled between 2019 and 2021, according to Cornerstone Advisors, Gen Z use grew by 6 times!

All kinds of customers are seeing the benefits in these services, however. Cornerstone’s research also shows us significant growth among Baby Boomers and Gen X too.

According to analysts, the number of BNPL retail purchases in the US likely toppled $100 billion by the end of 2021.

4. BNPL options increases conversions by up to 30%

According to RBC Capital Markets in an interview with CNBC, BNPL services are extremely valuable for companies. Retailers say the point-of-sale loans are easy to manage, and they lead to more conversions, as well as happier customers.

Having a BNPL service on a checkout page could be enough to increase conversion rates by up to 20% or 30%. What’s more, the average size of the purchase increases with these offers too. Customers can buy between 30 and 50% more when they don’t have to pay all at once.

Installment payments make customers feel like they’re taking less of a risk with their purchases, so they’re more comfortable spending.

5. Customers use BNPL to conserve cash (and buy things they can’t afford)

The Motley Fool’s financial assessment branch discovered several reasons why users are investing in BNPL services. Since the pandemic started, about 41% of customers say they use the solutions to save cash “in case of an emergency”.

Another 25% of customers said they were using BNPL because they lost income during the pandemic. Worryingly, around 45% of respondents used their service to buy products they couldn’t afford according to their budget.

Going forward, about 62% of Buy Now Pay Later users think the service could become the perfect alternative to credit cards. Since credit cards are becoming harder to access for younger customers, BNPL could be the way forward.

6. 51% of customers used BNPL during the pandemic

CR Research, like many analysts looking at Buy Now Pay Later solutions today, believes most customers started using these tools due to increased pressures caused by the pandemic. Around 71% of consumers in the company’s survey said they were making more purchases online.

As well as spending more online, customers also revealed they were struggling more to pay for their purchases out of their own pockets. 51% of consumers used BNPL services during the pandemic.

When using Buy Now Pay Later products, clothing, and electronics were the most common purchases (40% each), followed by furniture (322%), and appliances (29%).

7. The average transaction is worth $104

In an article discussing the rise of Buy Now Pay Later services, the Washington Post revealed the average purchase on Klarna is worth around $104 or £75 (GBP). This indicates people aren’t always using these solutions to buy large, flashy items.

Other studies have revealed similar insights. An interview with Afterpay co-founder Nick Molnar found the average purchase with Afterpay was worth around $100.

In the UK, demand for BNPL solutions has skyrocketed. According to a report by City AM, Shoppers were particularly reliant on the service during the holiday period. Brits racked up around £3.3 billion in Buy Now Pay Later debt over Christmas.

Overall, BNPL spending increased by around £1 billion as customers took advantage of new retailers offering instalment payment options. Unfortunately, around 40% of customers have yet to pay back what they owe, and 11% have already missed repayments.

The rise in spending in the UK prompted the Which? Consumer group to issue warnings to shoppers about the debt BNPL products can create.

9. Almost a third of BNPL users have made a late payment

In a comprehensive overview of the BNPL market, the Ascent revealed around 31.36% of customers have made a late payment on an agreement or incurred late fees. While younger customers are the most likely to take out BNPL deals, they’re also the most likely to end up with fees.

Around 47.45% of the consumers aged between 18 and 24 in the study said they’ve been late on their payments. Additionally, 18.91% of customers said they think they’re likely to be late with a payment within the next 12 months.

Respondents aged over the age of 54 were the most likely to say they wouldn’t be late with any BNPL payments. 62.8% said they were very or somewhat unlikely to incur late fees within 12 months.

CR Research asked its respondents how much they preferred Buy Now Pay Later services to other common installment payment options, like credit cards. 38% of users said they thought BNPL would eventually replace their credit cards.

Over half of respondents (56%), said they preferred Buy Now Pay Later services. When giving reasons why they liked BNPL solutions better, 45% quoted ease of use as the top driver for their purchasing decisions. 44% said BNPL gave them more spending flexibility, and 356% said the services had lower interest rates.

Around 33% of customers said they preferred BNPL because their credit cards were maxed out already.

As part of a new report unpacking the luxury shopping space in 2022, Klarna revealed around 84% of shoppers would find it helpful to pay for high-end items over time.

The study into 1,000 US shoppers found customers love buying pricier items with installment services. Around 78% of customers also said that they consider a luxury brand’s commitment to innovation as important in their purchasing decisions.

Around 57% of customers said they were looking specifically for more flexible payment options at checkouts as part of the shopping experience.

One of the leaders in the Buy Now Pay Later market, Afterpay, revealed a global shopping trend report in 2021, highlighting the behavior of its customers. The research showed a number of interesting findings, including that 65% of BNPL shoppers make two purchases using the service.

More importantly, when making multiple purchases with a Buy Now Pay Later solution, most shoppers make their second purchase fast. The customers in the Afterpay report made their two purchases within 6 months of each other.

For retailers, this could indicate using a BNPL on a checkout page will lead to more repeat purchases. For consumers, the stats suggest most BNPL services offer a good user experience.

PYMTs also found the share of younger customers who are interested in using monthly installment plans is enormous too. Around 87% of people between the ages of 22 and 44 want to break down larger payments into regular installments.

Unfortunately, part of the reason for the lack of credit card options among today’s consumers could be poor credit. Around 20.3% of younger customers have poor credit from past credit issues.

It’s no secret that there are many people looking for a quick fix when it comes to debt. That’s why companies like Afterpay, Zip, and the likes have become so popular in the past few years.

The rise of buy now, pay later providers is undeniable. Whether they be direct-buy companies or their credit-based counterparts, these companies offer a solution for those with less than perfect credit and also allow consumers to buy now and pay later. This convenience comes at a price, with interest sometimes exceeding 30%. But for those who are able to keep up with payments, buy now, pay later can have a lot of benefits.

It is clear that buy now, pay later has had a major impact on shopping habits in many countries. We are really excited about the future due to the increased adoption of these websites/apps for their easy and convenient service. These numbers just keep getting better and better each year!