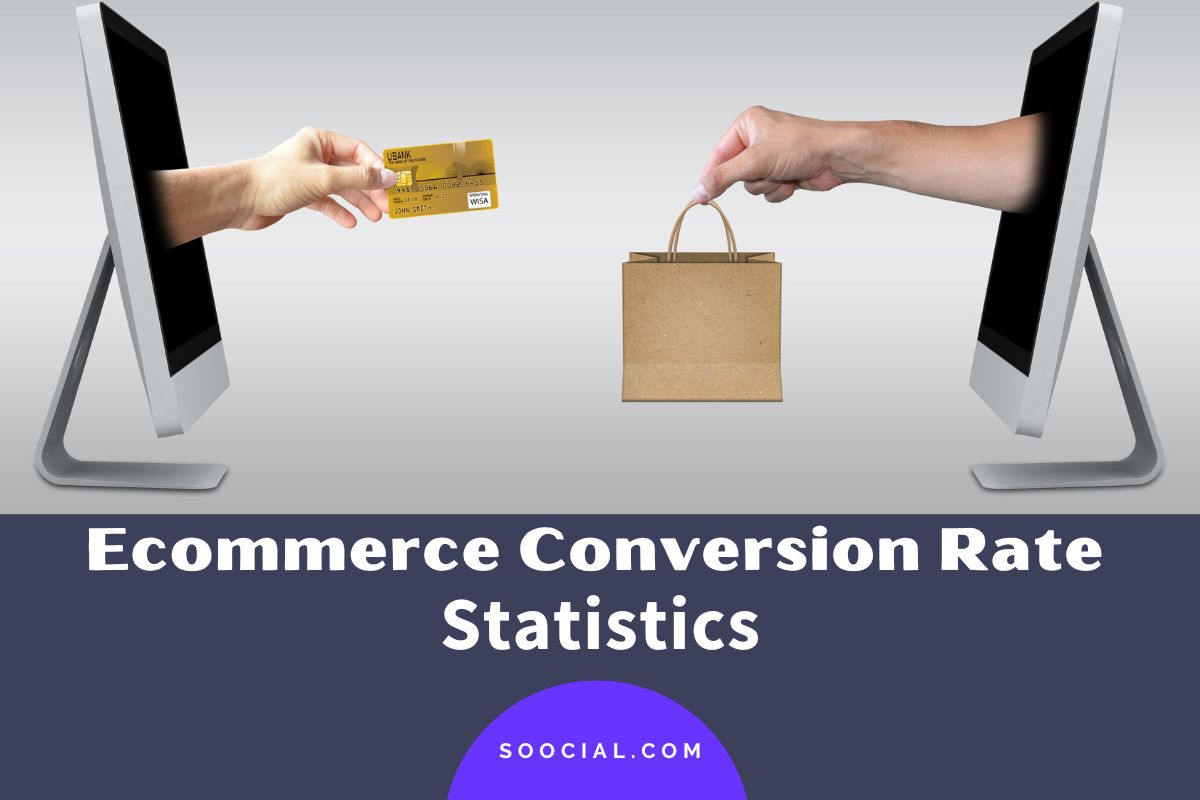 You’ve been looking for a fresh set of eCommerce conversion rate statistics, and now you’ve found them.

We’re sure you’ve heard the saying “data is king.” And while we don’t want to be the ones who tell you that data is not always the most important thing to focus on (because it totally is), it’s also true that the way you present your data can make all the difference in how people perceive it.

That’s why today we’re happy to present you with the latest eCommerce conversion rate statistics! We know from experience that this list will give you exactly what you need to get up-to-date on where things stand in eCommerce today—and help put your own business on track for success.

The eCommerce industry offers something that no one else can – shopping from anywhere in the world, at any time. Moreover, it provides competitive prices at your fingertips. No wonder online conversion rates are booming.

Check out some of the most fascinating eCommerce conversion rate statistics we discovered.

If you are intrigued by our chosen eCommerce conversion rate statistics, make sure to read the entire article. You will uncover many unbelievable pieces of information that will inspire you to log in to your favorite online brand and treat yourself to something new.

Moreover, there are some forecasts that it will skyrocket by the end of 2025, reaching $7.4 trillion. The most popular eCommerce activity is online shopping, which accounts for most of the revenue.

The world is digitizing, and with it, our lives are changing. An excellent proof is that there were 1.32 billion digital buyers in 2014 compared to 2.14 billion in 2021. The reason for this climb is the superb conversion rates seen in many eCommerce businesses.

Furthermore, with the number of digital buyers on the rise, PayPal has become the most popular payment method, with over 40% of online shoppers confirming their use.

The difference between the highest and the lowest eCommerce conversion rate during the period was 1.33%. It’s fair to note that November and December have traditionally high conversion rates because that’s when people do most of their holiday shopping.

In other words, the higher the conversion rate, the better the customer value proposition. Moreover, that also leads to lower customer acquisition costs.

5. 69.82% of eCommerce shoppers who added items to their cart never completed the purchase.

For comparison, the abandonment rate was 59.8% in 2006. So, this segment increased by 10.2% in the years between 2006 and 2021. While businesses can be hopeful that more sales are coming their way, they also need to invest in tools and marketing practices that will lower the cart abandonment segment.

6. The conversion rate for online retail stores in the US is 2.6%.

Based on Statista data, the conversion rate for eCommerce stores in the US is 2.6% in the fourth quarter of 2021. Interestingly, the percentage for the first quarter was 2.2% and for the second and third quarter 2.4%. That means the conversion rate among US online shoppers is higher at the end of the year.

7. The UK has an eCommerce conversion rate of 4%.

8. EMEA has the highest eCommerce conversion rates by region.

According to the data by Dynamic Yield focusing on the average eCommerce conversion rate by region, EMEA leads the way. The average conversion rate for the EMEA region was 4.05%. Next came the Americas, with an average rate of 3.64% and APAC, whose rate was 1.51%. These figures apply for the period between August 2021 and July 2022.

9. The online retail stores with the highest conversion rates are the most trusted brands.

The eCommerce websites with the highest conversation rates are those that build a reliable brand. According to a recent study by Oberlo, 81% of consumers claimed they are buying from brands they trust.

That is excellent advice for all online businesses. People will trust you if you are honest and transparent about your products or services.

10. Germany is the leader in eCommerce conversion rates by country.

eCommerce Europe released a report showing that Germany is the leader in conversion rates by country, with an average of 2.22%. This country was followed by the United States (1.96%) and the United Kingdom (1.88%).

Next on the list of countries with solid eCommerce conversion rates came Denmark, the Netherlands, and Greece. Their respective rates were 1.80%, 1.78%, and 1.44%.

Italy was among the countries where the conversion rate of eCommerce businesses was under 1% or, more precisely, 0.99%.

11. Free shipping can help you reach a higher conversion rate.

A study by Walker Sands showed us that free shipping leads to a high conversion rate. The data revealed that 77% of consumers choose free shipping as the most crucial option and the number one online purchase driver.

Moreover, most website visitors don’t see the free shipping as an extra service, but as a part of the product they purchase. That is because they consider it a necessity, not a perk.

12. Long and complicated check-out processes lead to a drop in the conversion rate.

A fast and seamless check-out process can help eCommerce businesses reach a higher conversion rate. That said, if the process is too complicated or too long, it will lead to a significantly lower conversion rate.

According to the latest abandonment rate statistics, 21% of online shoppers abandoned their orders because the check-out process took too much of their time.

It seems that using a countdown timer as a marketing strategy can do wonders for your conversion rate. A countdown timer can lead to a 9% increase in revenue, which is not a small number.

In addition, the countdown timer creates a sense of urgency in your website visitors and makes them feel like they are missing out if they don’t grab the deal.

That said, your customers can easily recognize if you are faking urgency. Unfortunately, that causes customer distrust, which leads to a severe drop in your eCommerce conversion rate.

On the other hand, product abandonment emails and birthday emails do not have the same success. They can reach up to 18% and 11% conversion rates, respectively. 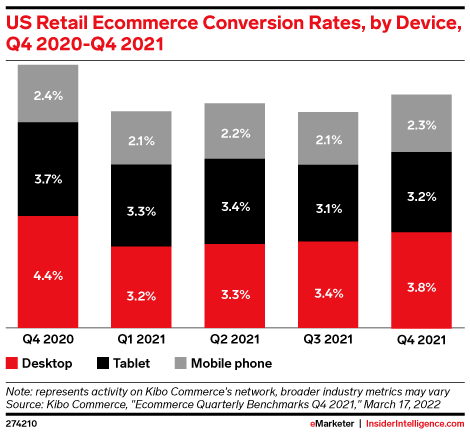 16. Windows is the platform with the highest eCommerce conversion rates.

We have already learned that desktop computers lead to higher conversion rates than mobile devices. But what about the most popular platforms? You probably already guessed that Windows is the platform’s leader in conversion rates. With a rate of 4.9%, it’s way ahead of the rest.

Can you also guess what platform is the last one? It’s Linux, with a conversion rate of barely 0.02%.

If you are also curious about the other platforms, here are some interesting numbers that will make you think.

If you own an eCommerce business and want to see as high conversion rates as possible, it’s wise to adapt your platform to desktops. Desktop shoppers have the highest eCommerce conversion rate of 6.28% and the lowest at 3.98%. Both figures are impressive.

By comparison, Dynamic Yield data shows that mobile devices have the worst conversion rates, with the maximum being 3.73% and the minimum at 2.64%.

Finally, tablet devices are somewhere in the middle. During traditionally good periods for online shopping, their maximum conversion rates reach up to 5.75%, whereas the lowest points go down to 3.91%.

Other popular channels that drive conversions, yet not that high, include Google Ads (1.42% average), Facebook (0.93% average), and social media (0.75% average).

One way to boost your eCommerce conversion rates is to ensure you offer preferred payment methods. According to a ResearchGate study, credit cards are the primary choice for 42% of online shoppers. They are followed by electronic payment methods (39%) and debit cards (28%).

Other popular options include cash on delivery (23%) and bank transfers (20%). Still, credit cards lead the way, thanks to their ease of use.

The same study reveals the most popular electronic payment wallets among US shoppers that drive high conversion rates. Most consumers prefer PayPal (76%), while other popular options include Amazon (24%) and VisaCheckout (15%). Other e-wallets like Google Wallet, Apple Pay, and Android Pay are all popular among less than 15% of consumers.

So, businesses that want to ensure better eCommerce conversion rates should focus on offering credit cards and PayPal to get the best results.

21. Food and beverage industry has the highest eCommerce conversion rate by industry.

22. The fashion, accessories, and apparel industry’s eCommerce conversion rate generally moves between 3% and 4.5%.

23. The eCommerce conversion rate dropped in several industries between August 2021 and July 2022.

Dynamic Yield’s data reveals that the eCommerce conversion rates for some industries have dropped. Here are the insights we discovered.

However, not all industries noted negative trends. In fact, most of the sectors covered by the report saw their conversion rates improve.

24. The cosmetic industry in France had a 32% conversion rate drop during the peak of the COVID-19 pandemic.

COVID-19 heavily affected every industry in the world. However, when it comes to conversion rates, we witnessed the most unexpected change in 2020 in France.

25. The fitness industry has the highest conversion rate on Facebook.

While Facebook may not be the overall winner in conversation rates, some industries are thriving on this social media.

According to an interesting WebFX infographic, the fitness industry has an incredible 14% conversion rate on Facebook. That said, some industries should avoid Facebook marketing because of the low conversion rate.

When Facebook conversions are considered, the technology industry has only a 2.31% conversion rate.

So there you have it: the latest industry data on eCommerce conversion rates. We hope you found this article useful and that it has given you a good idea of what to expect from your eCommerce strategy.

If you have an eCommerce business, you should be cognizant of the fact that your customers are more informed than ever before. You have to make sure they know exactly what they’re getting into when they purchase from you and that they feel confident in their decision—or else they’ll go elsewhere.

If you’re looking for more information on how to improve your eCommerce Conversion Rate, we have a few suggestions:

We know that the eCommerce industry is constantly changing and evolving, so we’ll keep an eye on the latest and greatest eCommerce conversion rate stats, and we’ll be sure to share them with you as they come up.

As always, if you have any questions or comments about any of these stats, please leave us a note via email.

31 Ecommerce Fulfillment Statistics You Will Want To Know

19 AI In Ecommerce Statistics That Will Blow Your Mind