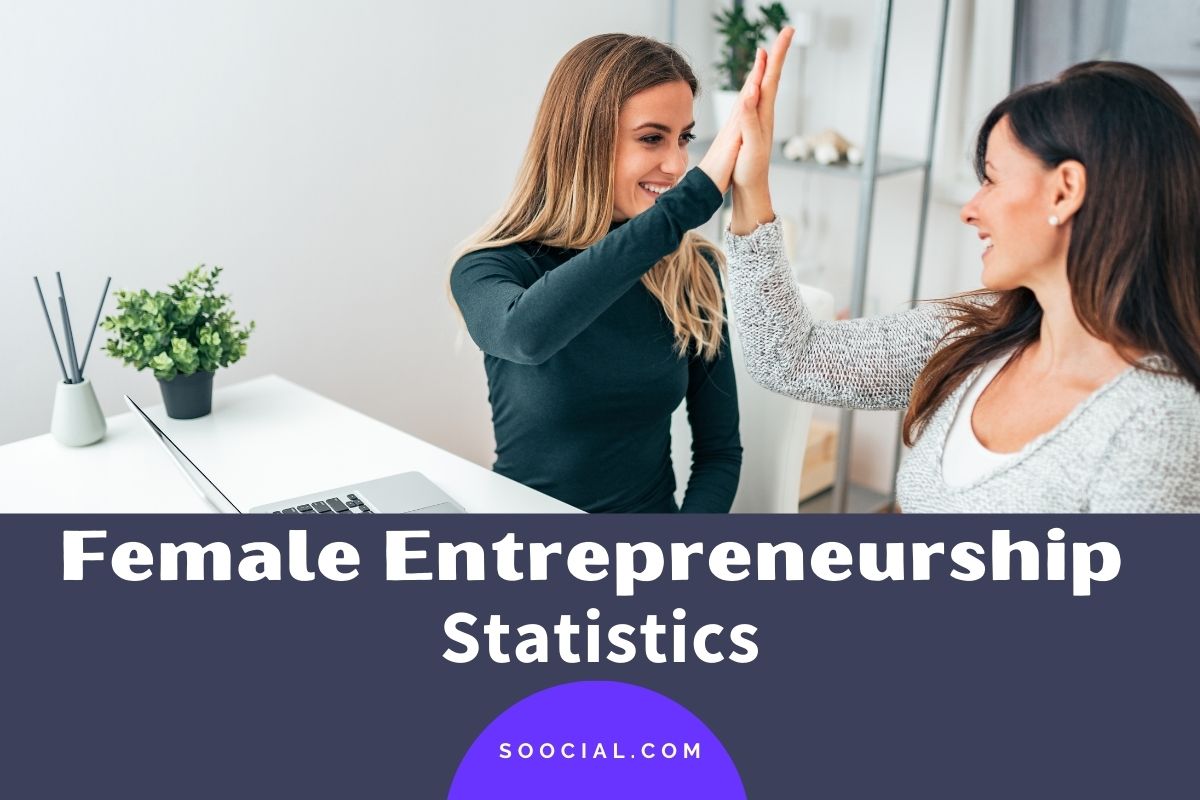 For years, female entrepreneurship statistics have shown a significant difference between men and women when starting a business. Inequality between the genders has emerged as a significant issue in virtually every industry over the years.

Currently, the issue is prompting many groups and government entities to act in search of balance. More grants, training opportunities, and support solutions are now available for female entrepreneurs than ever before. However, there’s still a significant amount of work to do before women have access to all the same opportunities as men.

As we continue forward into a post-pandemic future, where starting and maintaining a business may be harder than ever, it’s important for business leaders to know their landscape.

The following stats offer an insight into the changing nature of female entrepreneurship.

1. Female entrepreneurs are most common in Angola

Around the world, opportunities for female entrepreneurs are growing. However, some regions seem to be more open to gender equality than others. In the developing nation of Angola, around 51.1% of entrepreneurs are women, driven by the growing demand for innovation.

2. 64% of women begin their own ventures out of necessity.

According to a report on female entrepreneurs by EdelGive Foundation, reasons for launching a business can vary from one woman to the next. Around 64% of women said they started their own venture out of necessity, due to the financial circumstances of their families.

Another 63% said that they believed their entrepreneurial ventures would improve their social status and help them to achieve greater financial independence.

31% of all small business or franchise owners in the US are women as of 2021, an increase from 27% in 2020, according to a report from Guidant Financial.

According to this study, the majority of the women who own a business in the world today are highly educated, with 34% holding a bachelor’s degree, and 27% holding a master’s degree. Around 8% of business owners interviewed in the study had a Doctorate degree.

4. The US is the best place for female entrepreneurs to grow

Research published by Mastercard in 2019 found the US is currently the best environment for business entrepreneur in terms of access to funding and opportunities.

The study looked at available data from international organizations like UNESCO and the Global Entrpreneurship monitor to create an index tracking the progress and success of female business owners.

The results of the study found the United States had the best score for factors like women’s advancement outcomes, knowledge assets, and financial support.

Unfortunately, the US is far from the top country to find female entrepreneurs, with just 35.1% of all entrepreneurs identifying as female in 2019.

The SCORE Megaphone of Main Street 2018 report, and 2018 State of Women-Owned Business report by American Express revealed a number of valuable insights. Around 1,821 net new women-owned businesses were launched every day in 2018, and women were more likely to want to launch their own company than men.

While women-owned businesses generate around $1.8 trillion, around 88% of these companies generate less than $100,000 in revenue.

6. Health and beauty are the top industries for female entrepreneurs

The top four industries for women to own their own business, according to Guidant Financial, are health, beauty and fitness services, food and restaurant, and business services.

The report also found the reasons these women choose to become entrepreneurs vary, but 29% are keen to become their own boss, while a further 20% said they wanted to pursue their passion. 13% of women said they were overwhelmingly dissatisfied with the opportunities of corporate America.

7. Female entrepreneurs employ 9.4 million people in the US

The SBA Office of Advocacy found in 2019 there were approximately 1.1 million employer businesses owned by women in the United States. Around 99.9% of these were small companies. Though small in size, these businesses have a huge impact on the employment landscape.

Around 9.4 million workers get their jobs from female business owners. Women employ the most people in the health care, social assistance, accommodation, and food services industry.

8. The average age of a female entrepreneur is 42

A study conducted by Small Biz Trends discovered the average age of a female entrepreneur is currently around 42. There are numerous examples of women entrepreneurs achieving incredible success over the age of 50 too, such as Oprah Winfrey and Martha Stewart.

Notably, the report also found around 47% of female entrepreneurs are well educated, with a college degree or higher. What’s more, their average net worth evens out at around $355,976,666, with many women owning more than one company.

While Quantic acknowledges the progress in the industry by female business owners, it notes women continue to experience significant discrimination in the entrepreneurial world.

10. Nearly half of businesses created by women in 2020 were minority-owned

(Gusto and the NAWBO)

A study conducted by Gusto and the National Association of Women Business Owners in 2021 looked at responses from 1,199 women business owners in different industries last year.

The report revealed 5% of women business owners started their new company during COVID. According to the study, around 47% of all the businesses started in the last year were owned by minorities and created out of need.

Women were more than twice as likely as men (35% over 17%) to start a new business due to a financial imperative.

Figures from Crunchbase demonstrate one of the reasons women struggle to succeed in the entrepreneurial landscape today: lack of funding. According to the data from 2020, only around 2.3% of Venture Capital funding was given to women.

This access to funding has actually dropped since 2019 (when it was ranked at 2.8%). According to groups like the Harvard Business Review, this demonstrates women are under increasing pressure during unpredictable events, like the pandemic.

12. 30% of female business owners have owned their company for more than 10 years

30% of respondents to the Guidant Financial study on female entrepreneurship said they had owned their business for 10 years or more. Around 17% only launched in 2020, and around 20% had been running for two to three years at the time of the report.

13% of female-owned businesses were running for around 4 to 5 years in total. The study shows a large number of companies owned by women last for a surprisingly long time.

13. 24% of women say marketing issues are their biggest challenges

When asked about the challenges they faced outside of the pandemic, 24% of women in the Guidant Financial report said marketing and advertising was their biggest concern. The second most common issue was lack of capital or cashflow, at 17%.

For 15% of employees, retaining and recruiting employees was a major issue, while 14% of women said managing and providing benefits was difficult. Around 13% of all women surveyed named administrative work as an issue.

14. More than a third of female entrepreneurs directly deal with gender bias

A study conducted by HSBC Private Banking and reported by CNBC found over a third of all female entrepreneurs experience gender bias when attempting to raise capital for their business.

The findings come from a survey of over 1,200, just over half of whom were women, across eight countries between June and July in 2019. A wider survey was also carried out online. In the UK, a round 54% of women said they were subject to bias during funding rounds.

46% of women said they experienced gender bias in the US, and in China, women receiving funding achieved the lowest levels of bias.

15. 40% of women who launched businesses recently did so due to the pandemic

(Gusto and the NAWBO)

In Gusto and NAWBO’s study of female entrepreneurs and their response to the pandemic and its economic downturn, the researchers discovered most innovation happened out of necessity lately.

While around 58% of female business owners wanted control over their work schedule, and 24% said they wanted to start a business they could pass onto their family, around 37% simply needed to improve their financial opportunities.

Perhaps unsurprisingly given the challenges faced by women today, 19% of women in the Guidant Financial small business trends study said they felt very unconfident about business opportunities. Around 22% were neutral, while around 58% said they were “somewhat confident”.

Confidence in small business opportunities among women has fallen, as part due to the pandemic, which has prompted more problems for small business owners attempting to receive funding.

Despite concerns and challenges, around 77% of women said they expect their business to survive through the pandemic.

A report conducted by Biz2Credit and published by CNBC found the average annual revenues rose by 68% between 2018 and 2019. However, while the growth was impressive, male-owned businesses continue to generate a much higher annual revenue.

According to the study, which looked at around 30,000 companies across the US in more than 20 industries, male entrepreneurs make almost double the revenue of their female counterparts on average.

18. Women are charged more than men on term loans in the UK

The UK Survey of SME Finances found financing is likely to be a significant issue for women hoping to start their own business. The report from 2020 discovered women are charged an average of 1% more on term loans for their businesses than men (2.9% vs 1.9%).

Additionally, the same report shows around one-third of women consider access to funding to be their biggest barrier to starting a business, compared to around 20% of men.

19. Generation X accounts for the largest number of female-owned businesses

According to the report on female entrepreneurship from Guidant Financial, there are rising opportunities for younger people in the world of female business ownership.

While just over half of the women who own businesses today are from Generation X, millennial opportunities are emerging too.

Around 31% of modern female business owners are baby boomers, while approximately 17% are millennials. Even Gen Z are making their way into the entrepreneur landscape, accounting for 1% of respondents in the study.

20. Women-owned businesses are growing faster than ever

The same study revealed total employment by women-owned businesses rose by 8% during this five-year period. The employment level on average for all businesses was around 1.8%.

In terms of revenue, the total revenue growth for women-owned businesses was around 1% higher than for businesses in general (21% vs 20%).

21. Female entrepreneurs are more likely to be college-educated than men.

Women are more likely than men to hold a college degree when they start their business, and we wanted to remind you that no matter what you’ve been through before, it’s never too late to make your dreams a reality.

Female entrepreneurs in the United States are more likely to have at least an undergraduate degree than men (68 percent vs. 63 percent). However, a similar divide exists in the enrollment of women and men in colleges and universities across the country.

What I find most interesting about these findings is that it’s almost the opposite of what many people would expect.

There you have it—21 Female Entrepreneurship Statistics to know. It’s been a long journey, but we’re here at the end of our blog post! We just hope you enjoyed it and learned something along the way.

So, now that you know more about female entrepreneurship, we want to hear from you:

It was a pleasure sharing these stats with you, and we hope to see you here again next time!

If you found this helpful, please share this article with a female friend or colleague who could use some inspiration. You never know where they might be in their business journey. You could be the one to make all the difference!

405 Instagram Names for Girls to Get You More Followers

315 Youtube Channel Name Ideas for Girls to Be Inspired