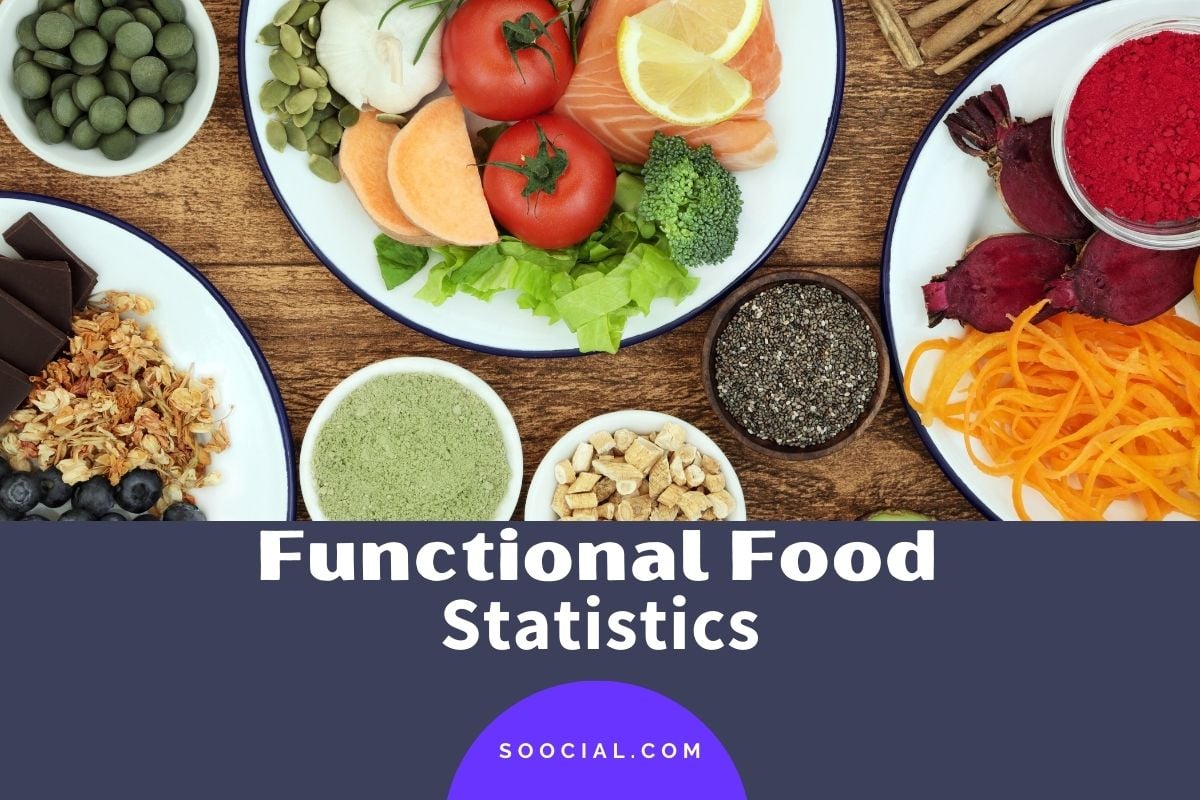 In recent years, consumers have started reprioritizing their nutrition while personalizing their approaches to healthy eating. This led to the functional food market being one of the fastest-growing components of the global food industry.

Since functional foods have a potentially positive impact on health beyond essential nutrition, the numbers around them, understandably, started growing more since the pandemic started and show no signs of slowing down.

Stick around if you want to read some impressive functional food statistics and facts that might change your opinion about the type of food you prefer.

The global functional food market has undergone substantial growth in the past few years. Therefore, let’s open up by listing the crucial figures regarding this up-and-coming industry.

1. At the beginning of 2020, fortified/functional food sales topped $267 billion globally.

These percentages come due to growing consumer demand for well-researched ingredients like probiotics.

The current pandemic might be the main reason for the boost in functional food interest since this type of nutrition delivers wellbeing benefits like stress management and immunity.

As per functional food stats, these numbers are expected to grow even further, precisely at a CAGR of 2.71% during the forecast period 2021-2026.

3. 42% of consumers stated to have adopted a long-term approach to health several years before.

These statistics show that even though the pandemic might have accelerated functional food trends, this is not a new shift.

The shift, however, comes as no surprise due to already concerning numbers in 2020, as 44% of global consumers reported having health problems, while 30% suffered from some kind of intolerance or allergy.

The survey studied billions of online data topics such as social media interactions, recipes, delivery, and restaurant menus, using artificial intelligence. Moreover, it showed that there had been increased interest in boosting the micronutrient content of baked goods.

Other statistics also reveal that, following the growth in 2021 of 9.4%, functional food and beverages sales are predicted to climb even higher in 2022.

5. The global functional food ingredient market is assessed to reach $108.7 billion by 2025.

In 2019, the functional food market size was valued at almost $178 million, while it is predicted to reach around $268 million by 2027, according to functional food statistics from 2021.

When it comes to regions, not only did Asia-Pacific dominate the functional food market in 2019, but it continued setting records years after.

Read on if you want to find out what types of functional foods are among the most sought-after ones or some more figures concerning the overall functional food market.

7. In 2025, retail sales of fortified or functional baby food in the US are foreseen to decrease to around $2.7 billion.

Fortified baby food is a soft and effortlessly consumable food, other than newborn formula while arriving in the mixed formulation and different combinations and tastes.

In 2020, retail sales of fortified or functional baby food in the US reached over $3 billion.

8. A study shows that a quarter of the US adults were actively using food to manage their health.

As per the mentioned report from 2019, 70% of convenience store retailers in the US experienced a boost in sales for better-for-you products.

This further shows that the number of consumers taking wellness-enhancing products for both their mental and physical health has been growing even before the Covid-19 started.

9. With the start of the current pandemic, functional ingredients containing zinc were up 161%.

Ever since the Covid-19 started, consumers have started wanting more from their products, such as foods that give them a good taste and functional benefits. A focus on healthy foods and drinks seasoned with functional ingredients has become a priority for shoppers.

Besides zinc, in 2020, functional ingredients containing calcium antacid grew by 122%.

These numbers represent a significant growth compared to those $32.3 billion from 2016. Some of the leading US companies in this category included Kellogg Co, Chobani LLC, and Dean Foods Co.

The fastest-growing subcategory was reduced sugar sports drinks during this five-year-long period, reaching $1.4 billion in 2020.

Furthermore, in the 2021-2025 period, fortified/functional hot drinks are predicted to see even higher growth than functional soft drinks.

Some of the leading US companies in this category included PepsiCo Inc, Monster Beverage Corp, and Red Bull GmbH.

As per research from 2021, this market stood at $258.80 billion in 2020 and will exhibit a CAGR of 9.5% by 2028. This comes as little surprise since, due to the pandemic, health professionals are actively advertising functional food and beverages to improve immune systems.

14. In 2019, the probiotic part took one-third half of the international functional food market share.

Although the sales faced some declines in 2020, probiotics are still a best-selling ingredient across channels.

What’s more, thanks to the growing comprehension of microbiome health advantages, probiotic sales are expected to grow in the following years as well.

16. As per a recent study on the functional food market segments, the vitamins segment is estimated to record a CAGR of 7.7% during the 2021-2027 period.

Fortified/functional packaged food products represented the highest sales value at $34.2 billion in 2020, while the health and wellness packaged food category took up 64.7% of the market.

After listing all the essential figures regarding the functional food market, let’s delve into the demographics. Which generation represents the target market for functional food, and what have global consumers searched for on the internet in recent years?

Read on to find out this and some more interesting facts about the functional food industry!

18. Since the world is encountering a change in demographics, the functional food trend is here to stay.

Approximately 40% of the population will be people born between 1989 and the mid-2000s in the next five years, meaning the functional food market will continue to enjoy popularity since these generations are among the most health-conscious ones.

Still, the number of elderly consumers will also rise with the young population. As this demographic shows interest in maintaining their health and independence, it also represents a growing market for functional food.

20. As per a survey from 2021, 60% of global consumers are actively searching for food and beverages to satisfy their present wellness needs.

People have been getting more aware of factors that contribute to mental and physical health. What’s more, the current pandemic modified consumers’ habits, including how they eat and perceive food. This is yet another reason why the future of functional foods and beverages looks bright.

21. Research from 2019 shows that 40% of the general population is represented by consumers who live a healthy, active lifestyle.

The research predicts that functional food sales will be increasingly driven by lifestyle problems and conditions of aging of 109 million 50+ Americans and 48 million Americans older than 65.

22. An estimated value of the Chinese functional food market in 2021 was around $31 billion.

Functional food was first defined as a product with specific health functions or that supplies vitamins and minerals by the Chinese authorities in 2005.

In 2021, over a third of Chinese aged between 18 and 25 years intended to improve their health spending, leading to consuming functional food becoming a popular strategy for them.

23. Compared to conventional foods, the functional food price is 30 to 500% higher.

This is one of the primary reasons why the growth of functional food might be restricted. However, the higher price of functional food products comes as no surprise since they need to include healthier or natural ingredients that are much more expensive.

24. The meat snacking market is 300% bigger than the entire plant-based meat substitutes category.

What’s more, during the 2016-2021 period, the whole milk increased its sales by $1 billion, while, in 2020, one of the 10 most popular new product launches in the US was a 25% dairy fat ice cream that was eaten as part of a weight control diet.

25. Among several motivations driving the current use of functional foods and beverages, 48% of users say they consume them because they feel they should.

Furthermore, 33% are concerned that non-fortified food doesn’t provide the necessary nutrients for their body. Lastly, 17% of consumers are currently treating some illness.

What are the categories of functional food?

Although there are numerous ways to categorize functional food, one way is to list them by five different types: fortified, enriched, altered, non-altered, and enhanced products.

How the future of the functional food market looks like?

Over the past several years, especially since the beginning of the Covid-19 pandemic, people have become more conscious about their eating habits, shifting massively to functional foods and beverages.

What are the potential benefits of functional foods?

There are numerous health benefits of consuming functional foods and beverages, including prevention of nutrient deficiencies, protection against diseases, and promoting proper growth and development.

Nowadays, a growing number of consumers demand modified foods, beverages, and dietary solutions to help with their own nutrition and individual health goals. This is where functional foods come into play since they boast numerous potential health benefits.

According to all of these functional food statistics we have discussed, we can safely say that the future for this type of food looks bright.

So, now that we’ve looked at these functional food statistics, it’s time to wrap up. We hope you found the information on this list helpful, and that you were able to get a new perspective on the facts surrounding functional foods.

Having this information is crucial to making your business decisions, whether you’re just starting out or already running a successful brand. Remember to incorporate some of these statistics into your marketing strategies so that you can maximize your potential for success! Good luck!