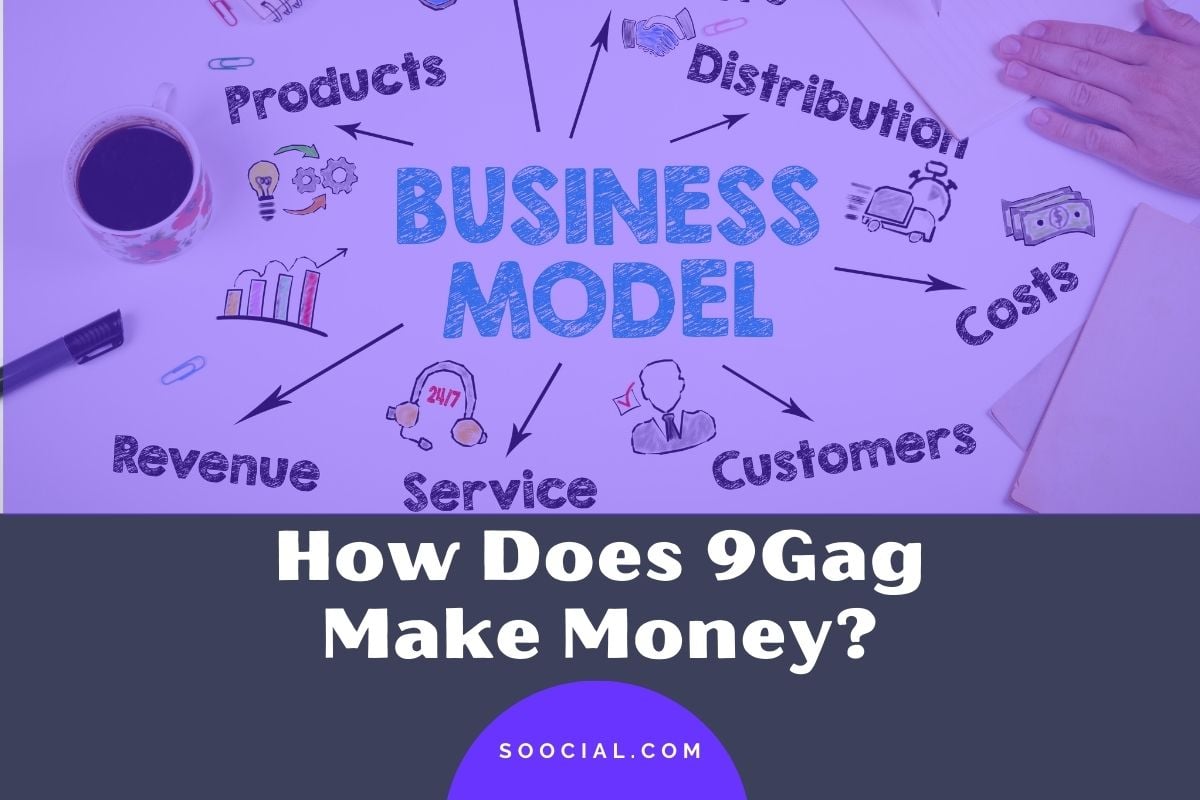 In the past few years, 9GAG has become the go-to place for the latest funny memes and the best viral content on the web. It is an extremely popular website with over 100 million visitors per month and it seems like everyone is on 9GAG these days.

But how does 9GAG make money? 9GAG makes money by selling ads to companies that want to advertise new products and services, charging pro membership fees, accepting donations, and selling merchandise on the 9GAG shop. 9GAG is a profitable, fast-growing community website.

In this article, we’ll take a closer look at its business model and find out all its revenue sources.

9GAG is a website with a social media presence and a mobile app that features popular funny memes, animated gifs, and viral videos.

How Does 9GAG Make Money?

Under its terms of service, 9GAG.com does not share any earnings from advertisements with the video creators.

This is a private company. Revenues and earnings are not published publicly. However, some think that the company makes about $1.2 million in advertising revenue each month.

A report from HM Social Media breaks it down with more specifics about 9GAG. 9GAG got popular before Facebook, especially in Asia.

9GAG compares to Reddit, and the notorious 4CHAN in that no-holds-barred humor is the main attraction for many of the web visitors, to the point of often being sophomoric and offensive.

For the most part, the audience has a teenage male mentality with interests in video gaming, anime, comics, sports, food, drinks, and animals. A popular chat board called “Ask Girls” will give you an idea of what the guys on 9GAG.com are thinking about.

On a good day, over 11 million visitors will view 9GAG.com, which adds up to over four billion visitors annually. Multiply by five, and you have 20 billion page views per year. This gives 9GAG.com a Google page ranking of six in the top ten most popular funny meme websites.

The users make the content. The viewers then up-vote or down-vote the content. Popularity makes it trending, and that creates a viral response. The content has an addictive quality. Once you start reading it, it is challenging to stop.

The company uses only a handful of about eight human editors to help select content for promotion on the website and social media.

The company admits that there are occasional problems with hate speech and offensive content that slips through. However, users are diligent in reporting such content, and human editors can take it down very quickly before it hurts too many people.

The millions of daily website viewers create ad revenues of up to $13,000 per day, which generates an estimation of $9.8 million per year.

9GAG does not use any third-party advertising systems like Google’s Adsense, which takes a commission from the ad placements. Instead, the website uses a proprietary native platform to capture 100% of the ad revenues.

9GAG sells the web traffic for a tidy sum, and advertisers are happy to pay for it. The web pages are kept reasonably clean, with limited advertisements. Therefore, ad placement on 9GAG.com has a significant impact for an advertiser.

In addition to the revenues generated by the 9GAG.com website, the company makes a significant amount of revenue from the sponsorship of content on social media. The amount is undisclosed but is thought to rival the website’s revenues.

9GAG was co-founded by Ray Chan and Brian Yu in Hong Kong in 2008 as a side project for fun with other college buddies.

Craft reports that the company has raised a total of $2.8 million since its inception. Wikipedia disagrees and said the amount raised was $2.8 million in July 2012 or August 2012. Whatever the timing actually was, the capital raise was only done once, over nine years ago. The company has been self-funded ever since.

In July 2021, it was estimated that the company had 123 employees, up 5% from the previous year. The company maintains offices in Hong Kong and Mountain View, California, located in the Silicon Valley area.

9GAG calls itself a global social media and digital publisher with a worldwide audience of about 150 million, mostly Generation Y (also known as Millennials) and Generation Z members.

Gen Z members are younger than Gen Y. They were born between 1996 and the mid-2000s. In America, there are approximately 90 million Gen Zers.

In June 2018, Iconosqaure said that 9GAG was the sixth most followed brand on Instagram. In 2017, Sharablee said 9GAG was the number one social media influencer for entertainment and gaming.

The appeal of the 9GAG system is that most of the content is user-generated, which creates a shared social media experience.

Advertisers can pay for the premium sponsorships of influencers. Advertisers can have compelling viral videos made with branded content. Advertisers gain direct access to the Gen Y and Gen Z audience that is challenging to access through other media and advertising campaigns.

Some of the general competitors of 9GAG for Internet advertising sales include Reddit, Feedly, Flipboard, and Digg. Some of the direct competitors reported by Alexa are websites that offering memes, animated gifs, and viral videos namely ImgFlip.com, Imgur.com, KnowYourMeme.com, and 9cache.com.

Many of the posts on 9GAG are pretty racy. There is also a section on 9GAG.com for those over 18 years old that is not suitable for work (NSFW). Many things can be freely presented on 9GAG except for any criticism of the Chinese government.

In mainland China, the government has website-blocking software that prevents anyone living in Mainland China from viewing any of the 9GAG material unless they use a virtual private network (VPN) to get around the ban. Using a VPN to bypass Chinese government censorship is illegal in China.

The recent anti-democratic crackdown in Hong Kong, with the shutting down of the last democratic newspaper, and the jailing of many reporters that worked for the paper, has also put the 9GAG company at risk of being closed down.

There are memes on 9GAG that make the President of China, Xi Jinping, look so … well, let’s say they are unflattering.

The Non-Asian Audience is Much Larger than the Asians

If the Chinese crackdown comes against 9GAG, then, as long as the founders and most of the staff are not trapped in Hong Kong, the website, mostly in the English language, will continue to flourish. Alexa also reports that 3,523 websites link to 9GAG.

The company continues to operate on the mission to “Go fun the world.” It seems like this will never go completely out of style.

The editors of 9GAG noticed that young people around the same age have similar problems that become the foundation for jokes. Sharing jokes works across multiple cultures in many instances, especially if the subjects are about graduating from college and other important life events that many young people experience.

There was talk in 2018 about making a comedy television program and building up the 9GAG media empire. Right now, the company is testing live chat boards that are still in beta mode. Users who sign up have access to the live chat, from “ask me anything” to a random chat by age group.

Conclusion: How Does 9GAG Make Money?

To sum up, 9GAG earns revenue through advertising, donations, and selling their own merch on their 9GAG store. It does so by making sure that the website is user-friendly and contains a lot of funny viral content to engage users for a longer time.

There are few major reasons that contribute to its popularity. First of all, 9GAG is an extremely user-friendly site. Every page is filled with pictures and the website is always very fast. On top of this, the site design, which resembles Reddit, gives users a familiar feeling. Their fun and friendly user interface keep millions of people coming back for more humorous content.

Thanks for visiting. We hope that we’ve managed to help you better understand how 9GAG generates revenue. If you have something to add or any question, don’t hesitate to email us. We’ll be glad to respond.

Have a great day 🙂