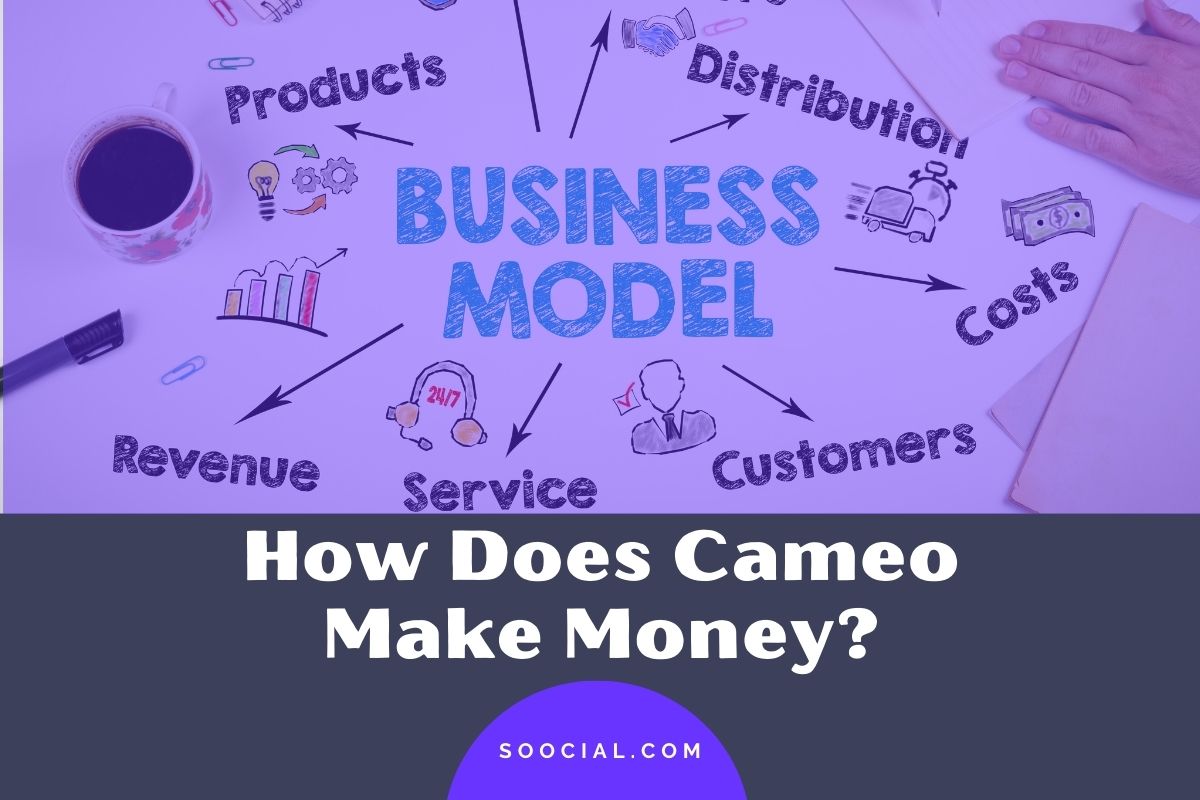 Founded in 2016, Cameo is a Chicago-based online platform that allows users to have personalized and authentic fan experiences with their favorite celebrities, sports stars, musicians, YouTube personalities, and more. The platform allows users to buy short personalized videos from various celebrities on the platform. The videos are called “Cameos” and fans can select a favorite celebrity of theirs to record and send a short video for a specific event or occasion.

If you’re wondering how Cameo makes money, look no further! In this blog post, we’ll dive deep into Cameo’s business model and break down the different ways that Cameo generates its revenue. So, without any further ado, let’s begin.

Cameo operates on a commission-based business model. Cameo charges 25% fees for all the transactions facilitated between the customers and the stars.

Cameo is an online video service that markets celebrities. It is an online marketplace for celebrity generated content like personalized videos, zoom calls, and chats.

Cameo is a source for personalised videos from your favorite stars!

It is available for both B2C and B2C. Furthermore, its future plans will not limit Cameo to just being a transactional site.

Cameo has been operational since 2016 and is based in Chicago.

As an online marketplace, customers are able to hire celebrities to create personalized content, usually in the form of videos but also in the form of zoom calls and chats.

Customers can access Cameo via the company’s website as well as its mobile phone applications (available on Android and iOS). Customers can also browse the platform’s directory to find celebrities.

Celebrities come from a wide variety:

New products have also been added:

Because Cameo is partnered with an army of celebrities, it does not really need to worry about marketing because these famous people have a vested interest in marketing Cameo themselves.

Furthermore, a lot of successful investors, including celebrities like Snoop Dogg and Tony Hawk, are attracting publicity for Cameo.

As with any platform, Cameo needs to pay for technically skilled staff, their energy expenses, and the maintenance of their equipment.

Additional expenses that one would expect of any major platform would include:

As more and more celebrities partner with Cameo and the value of their content continues to go up in value, profits will also continue to increase. Also, as Cameo’s customer base increases, profits are also likely to increase.

The majority of Cameo customers visit the video platform to obtain gifts for friends and family for birthdays, holidays, etc. Cameo claims that it has marketed more than 1.3 million videos last year. Their top 150 celebrities had earned more than $100,000 each for that year.

Cameo also plans to increase its market share by making its first acquisition. The online marketplace will buy Represent, a marketing and merch company that helps celebrities and brands set up individualized online storefronts.

For Cameo, this is a comfortable fit. This is due to the fact Cameo does not want to limit itself to just one type of celebrity. Rather, it wants to attract a large fanbase by inviting celebrities from a variety of backgrounds to create short, customized videos.

Celebrities within Represent’s talent pool include:

In addition to this new celebrity talent, Represent is also bringing its leadership and the acquisition will double the size of Cameo’s team in Europe. The terms of the deal were not disclosed by Cameo.

Cameo claims that its users will not see the changes right away. However, in the future they might be able to purchase “gift bundles” that would pair a traditional Cameo video with related merchandise connected to Represent.

The company also hopes that incorporating “merch”, merchandise marketed to a particular fanbase, into its revenue streams will do more than just increase profit.

They hope that in addition, incorporating merch will augment the fundraising efforts that many on-platform celebrities have been doing to raise money for nonprofits. In short, Cameo wants to use Represent’s merch to not only make a profit; they want to make a difference.

By incorporating the merch model into Cameo’s future business model, Cameo hopes to become a more multipurpose social platform that can fulfill a similar function as Instagram. For now, users spend a limited time on Cameo due to its transactional nature.

Part of Cameo’s plan for future profitability is to make Cameo a multi-purpose platform capable of providing entertainment and validation the way Instagram does as opposed to being simply a marketplace. With this strategy, users would be enticed to spend more time on Cameo and that additional time on the platform could be monetized any number of ways.

How Does Cameo Make Money?

Cameo, at the moment, makes money through the following four revenue streams:

Every celebrity that partners with Cameo gets to set his or her own price, which starts at $5 and can reach well into the thousands.

Once a video creator is chosen, the customer is directed to fill out a form. This form defines the request and can establish conditions that include:

To show customers what they are getting themselves into, the Cameo pages of video creators have the following:

Celebrity Zoom Calls allows customers to buy 10-minute Zoom calls with their favorite celebrity. These calls normally come at 2 to 3 times the price of a video.

Celebrity Chats allows a customer to chat with a star of his or her choice. The messages on these chats are limited to 250 characters.

Cameo now has a product for the B2B market, Cameo for Business.

Cameo for Business allows companies to:

Businesses can choose to approach celebrities directly and pitch their own arrangement. In this situation, Cameo charges a 5% service fee.

The CB4 Plan is a subcategory of the Cameo for Business package. With the CB4 Plan, the 5% fee is waived. Additional features of the CB4 Plan include:

Funding, Valuation, and Revenue of Cameo

Cameo has raised $165.2 million in funding so far.

Cameo’s valuation is at least $300 million. The year-to-year valuation figures, however, are not available at this time, however.

While the year-to-year revenue figures are also not available at this time, Cameo has stated in a blog post that the company had generated over $100 million in GMV for the year 2020. If you calculate with a commission of 25 percent, this would amount to $25 million in annual revenue.

The highest-grossing celebrity creator so far would be Brian Baumgartner who played Kevin Malone on the popular sitcom The Office. He earned more than $1 million in 2020 from his “Cameo shout-outs”.

Cameo is a profitable, venture-backed company that has already gained a footprint in the entertainment industry. Being well-funded, Cameo is able to commit more resources to building excellent marketing teams.

Their revenues have quadrupled within a one-year period and there is no evidence to show that their expenses have increased dramatically. In fact, Cameo’s marketing and advertising costs are actually lower than most companies because of their celebrity partnerships.

Talk show hosts like Howard Stern and Ellen Degeres have even name-dropped Cameo.

Conclusion: How Does Cameo Make Money?

In a nutshell, Cameo is a social network that connects fans with their favorite celebrities, from athletes to singers.

Through Cameo, users can purchase personalized video messages from their favorite celebs wishing them a happy birthday, congratulating them on their wedding, or anything else they might want to hear from a favorite celeb.

The company’s business model is simple: It takes a 25 percent cut from every transaction facilitated via its marketplace. So that’s how Cameo makes money.

We sincerely appreciate you reading this article and hope you’ve found this article to be helpful. We always love to hear from you so if you have any questions or suggestions, feel free to reach out. Also, feel free to share this post on social media if you like to.

Have a nice day!

How Does Jellysmack Make Money? Business Model of Jellysmack