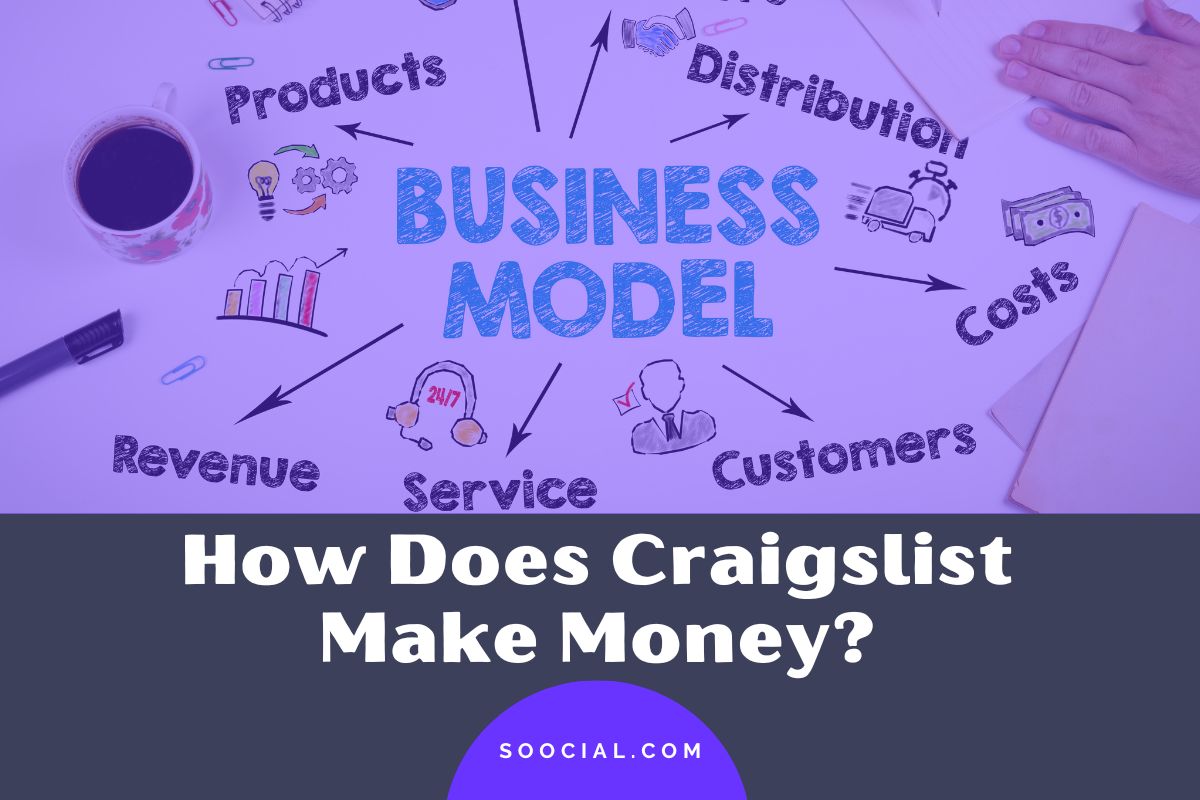 Craigslist is one of the most popular global online classified sites. The company charges posting fees for very select classified categories. Bet you’re wondering which ones those are!

Craigslist primarily makes money by charging posting fees for some very specific classified categories in limited markets. Otherwise, the company is well-known for offering free online classified for anything from finding a job to selling your couch.

Founded in 1995 by Craig Newmark, the company was originally an e-mail list sent to friends detailing local events in San Francisco. In 1996, it became a website and expanded to other classified services. The site has since expanded beyond San Francisco to cover 570 cities in over 70 countries.

Craigslist gets over 200 million visits a month, and millions of people use the site to find opportunities, an old kitchen table, or the perfect apartment.[1]

Contents show
What is Craigslist & How Does It Work?
Business Model of Craigslist
How Does Craigslist Make Money?
Posting Fees
Craigslist Funding, Valuation & Revenue
Is Craigslist Profitable?
Conclusion
Sources

What is Craigslist & How Does It Work?

Craigslist is an online classifieds site. The company allows individuals to post offers of things for sale, job postings, services, and housing ads. It also has a community section and a discussion forum. Craigslist’s offerings are localized with boards for different cities.

People who have something to post can easily write a post and publish it without needing to create an account to do so. After deciding what kind of ad you want to place, the poster types out the details of their post, adds pictures, chooses a contact method, and inputs their location.

They then need to confirm their post to make it go live. At that point, people searching for the things on the site can find their post and e-mail, text, or call them for more information. After discussing the price and sending more information on the item, the pair can meet up to exchange the item for the agreed upon price.

If the post is about a service or a job, people can connect over e-mail or in person for an interview. If about an apartment, an apartment viewing can be set up. Craigslist is primarily a marketplace for connecting people.

While Craigslist is used as a classified site, it is also a community. Some discussion boards are very active. People to talk about everything from divorce to cars to celebrities.

It also previously had a personals section where you could connect to go on dates. However, that section was removed when it was alleged that it was used primarily for prostitution.[2]

Craigslist is not a stranger to controversy. There were several high-profile rape and murder cases that involved someone meeting someone on Craigslist and then experiencing violence.[3]

Craigslist is also often used to scam people.[4] One common strategy is to list an apartment for rent and get someone to make a deposit on it. Usually, the person listing it is later found out not to be connected to the apartment in any way.

Craigslist wasn’t started originally to make money. Its founder simply wanted to create a resource that would benefit his community. Much of Craigslist’s evolution has been focused on providing a public good rather than making money.

That’s likely part of the reason the site has never had advertisements, despite that being a popular monetization strategy for similar online classifieds. Craigslist also doesn’t charge for most of their listings.

Instead, Craigslist only charges for postings in very select cases. For example, the company charges $25 for a job posting in six major US cities and $75 for a job post in San Francisco. The company also charges people in cities like New York City, Boston, and Chicago $5 to $10 to post an ad for a rental apartment and charges dealerships $3 to $5 to list cars.

Craigslist’s business model is therefore a freemium model where they provide a service for free in order to generate a large audience and then charge for certain premium or high value services.

It is unclear if Craigslist will find other ways to monetize their site in the future. There are ample opportunities to do so, including things like adding ads, charging for post placement, and other common strategies companies with similar business models use.

Craigslist has a few competitors in the online classified segment, including Facebook Marketplace and regional sites like Kijiji in Canada. They also face competition from companies that have focused on specific portions of their business model, such as Airbnb taking over their vacation rental traffic. Sites like Zillow have also been taking over some of Craigslist’s rental listing business.

Many of these sites have slicker interfaces and a better user experience than Craigslist. In recent years, Craigslist’s traffic has been declining.[5] Whether the company will be able to stay relevant will depend on whether other companies try to disrupt Craigslist’s hold on its profitable markets.

However, with online classifieds, it can be hard for an upstart to take over a significant portion of a market leader’s traffic and userbase. This is especially true due to the hyper-local aspect of Craigslist as any competitor would have to fight it out with Craigslist market by market. A critical mass of people needs to be convinced to switch from one company to another.

Craigslist likely has significant business, staffing, and development expenses. However, as a private company, Craigslist does not share its financials publicly. It’s unclear how much the company spends each year on expenses or what those expenses include.

How Does Craigslist Make Money?

Craigslist makes money in just one way – by charging for certain kinds of postings in limited markets. The company does not share their revenue or break down the source of their revenue.

While Craigslist’s posts are generally free, the company makes money by charging for certain kinds of posts in specific cities. Here is a listing of all the postings the company charges for:

While Craigslist’s fees are reasonable, the company is charging for high-volume postings in large, populated cities. That means that Craigslist likely makes a significant amount of money off these fees alone.

While Craigslist doesn’t explicitly state how much they make on their posting fees, the market research firm AIM Group has estimated the company’s revenue. They believe Craigslist generated $566 million in revenue from postings in 2020 and $660 million in 2021.[6]

Craigslist is currently a private company and doesn’t seem to have plans to go public. The company’s founder, Craig Newmark is thought by Forbes to still own 42% of the company.[7] The magazine recently estimated that Craigslist is likely worth $3 billion, making Newmark worth at least $1.3 billion.

Craigslist is only known to have received one round of funding in 2004. eBay made an investment in Craigslist that year to the tune of $13.5 million. Whether the company has ever taken on other investors without declaring it publicly is unknown.

Those numbers speak to a significant decline in revenue in 2020. That is likely due, in part, to the disruption of the COVID-19 pandemic. People might have been less eager to sell things or change apartments leading to fewer listings. However, the fact that the company’s revenue did not rebound in 2021 suggests the future of Craigslist might be at risk.

Craigslist is likely profitable. As a private company, Craigslist doesn’t make its financials public. However, some companies have estimated how much Craigslist makes from charging for certain of its online classified postings. If those numbers are correct, the company brought in $660 million in 2021. Given that the company’s expenses are likely modest, there is a good chance that Craigslist is a profitable company. [9]

The fact that Craigslist has not raised funds since 2004 also suggests that the company is generating enough revenue to at least cover its expenses.

So it would be safe to say that Craigslist has built one of the most popular user-driven marketplace businesses with mostly no charge for using its services and offering a simple and easy-to-use interface. It is, of course, backed by strong community and social integration, which is successful in fulfilling the needs of people across different sectors to sell their items at the local level.

One thing that makes the Craigslist business model unique is its lack of emphasis on revenue generation. While many companies seek to make as much money as possible, Craigslist is more concerned with offering its services for free.

By keeping its costs down, the online classifieds site can remain free while still turning a profit. This business model is ideal for Craigslist, and it’s why the website has been so successful so far.

Now that we’ve looked at how Craigslist makes money, what do you think? Is it a good idea to start a similar website? If so, are there any ways you would change their business model to make it more profitable or more efficient?

We invite you to share your thoughts via email!

How Does Upwork Make Money? Business Model of Upwork

24 Home Renovation Statistics You Didn’t Know But Should