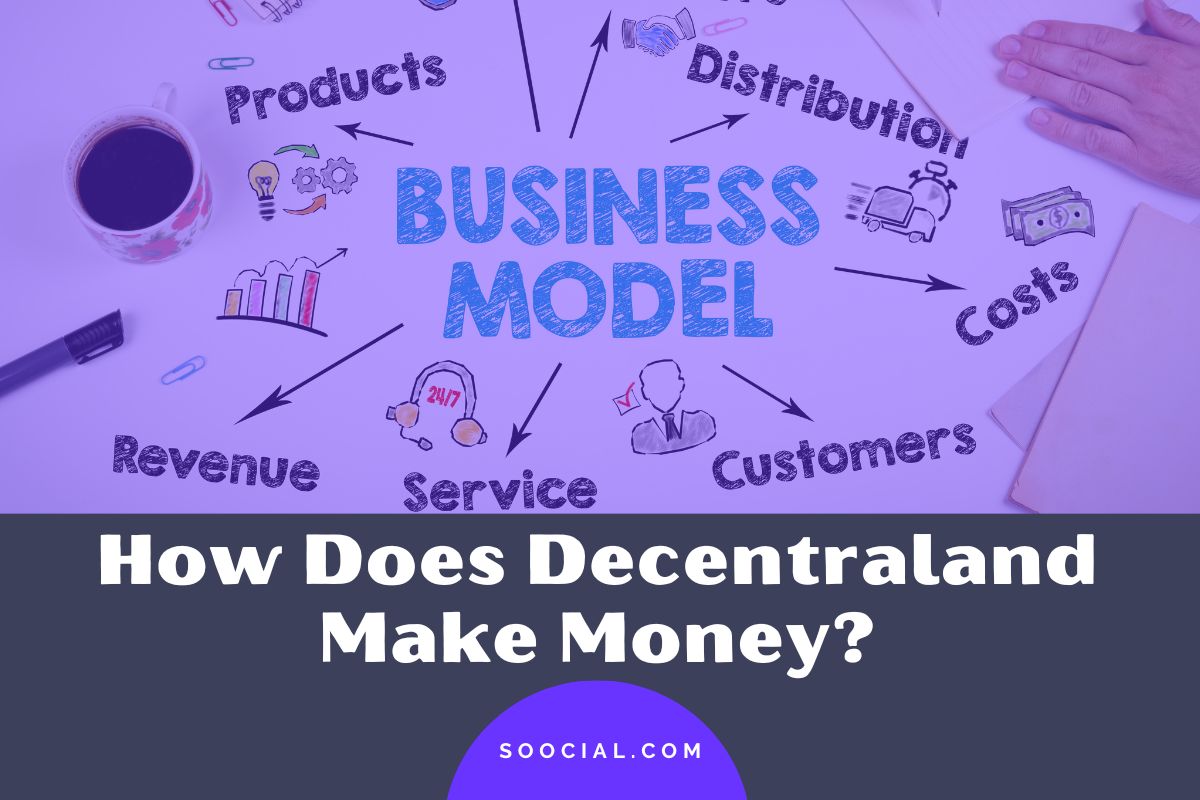 Decentraland is a metaverse gaming platform and decentralized virtual world that’s governed by users via a decentralized autonomous organization (DAO). As a decentralized platform, some people wonder how the company makes money. It’s likely not how you would expect!

Founded in 2015 by Yemel Jardi, Esteban Ordano, Manuel Araoz, and Ari Meilich, only Meilich and Ordano are still working on the project. The co-founders met while working in a ‘hacker house’ in Argentina. They saw the possibility of creating a virtual world powered by blockchain technology.

In 2017, Decentraland issued an Initial Coin Offering (ICO) to raise money to continue to build the project. Their ICO was extremely successful, raising approximately $26 million in seconds.[1]

What is Decentraland & How Does It Work?

Essentially, Decentraland is a gaming platform like other metaverse gaming platforms such as Roblox, a popular platform aimed at kids. However, just like Roblox, Decentraland doesn’t develop its own games. Instead, the company sells virtual real estate to developers and users so that they can make games on it. They can also monetize those games.

Once an individual or company owns or leases a piece of land in Decentraland, they can create games, applications, 3D experiences, and online casinos. For example, in 2022, Atari leased land in Decentraland to created a virtual gaming casino where people can socialize and play games.[2]

Content and applications created on Decentraland can be sold or traded, and so can land. This provides an opportunity for investors to realize capital gains from Decentraland virtual real estate investments.

Users can buy LAND at the Decentraland Marketplace or on secondary marketplaces. LAND is essentially a kind of non-fungible token (NFT). User can also create Estate tokens that represent merged parcels of land. These are also an NFT.

Virtual metaverses are taking off with the sector’s userbase growing. Competitors like Axie Infinity are selling plots of virtual land for millions of dollars.[3]

Companies can also use Decentraland for advertising. For example, they could set up a virtual location or offer immersive digital brand experiences.

Decentraland has its own currency called MANA, which is an ERC-20 token. MANA is not useable outside Decentraland, but it can be used to buy land inside the platform, and it can increase in price like other digital currencies. That makes it potentially a profitable investment.

Decentralized virtual worlds and gaming platforms are still relatively new, and the business model is evolving. Decentraland’s goal is to create a platform that others can build on and monetize their creations. This is similar to Roblox’s platform, which allows developers and companies to create games on it rather than creating games themselves.

By creating a platform that encourages others to develop games and experiences, Decentraland is building a more community-focused experience and getting other individuals and companies invested in its future success.

Unlike gaming companies like Roblox, Decentraland is also mixing in digital currencies and NFTs into its business model. This is designed to create currencies and virtual land that can potentially increase in value over time due to manufactured scarcity by limiting the issuance of coins.

It’s unclear whether this will prove to be a successful business model or what the future of Decentraland holds. A June 2022 report showed declining active user numbers on two popular blockchain-based virtual worlds: Sandbox and Decentraland. The report claimed that they both have fewer than 1000 active users per week.[4] However, Decentraland’s own data suggests those numbers are closer to 25,000 per day.[5]

In contrast, the report stated that non-blockchain affiliated virtual worlds like VRChat and Second Life have 30,000 daily concurrent users. Despite that, many in the blockchain industry believe that it is still early days for Decentraland and that more users will come when the platform has more games built on it.

Insiders and users say, however, that the rising price of LAND is proving to be a stumbling block for innovation. It is too expensive to buy land to create experiences due to speculation.[6]

An essential part of Decentraland’s business model is that the company decentralized governance of this virtual world. That means they will allow people who use the project or are invested in it to decide its future via a DAO where they can shape the world of Decentraland.

The DAO holds what Decentraland calls, ‘the most important smart contracts and assets that make up Decentraland – the LAND Contract, the Estates Contract, Wearables, Content Servers, and the marketplace.”

Essentially, Decentralized is based on a shared governance model. It claims to be one of the first fully decentralized virtual worlds with a goal of handing over control of the company to its users. Those who belong to the DAO are able to control the policies of Decentraland, determine what kinds of wearables are allowed, moderate content, and create policies around LAND use.

Users belong to the DAO by owning Estate, MANA, and LAND tokens. Their votes are portioned based on how much of each they own. Decentraland is maintained by the Decentraland Foundation.

Decentraland has moderate staffing and hosting expenses in order run the platform. As Decentraland is not a public company, it is unclear how much they spend and how much revenue they bring in.

While blockchain projects have faced criticism in recent years for their environmental impacts, Decentraland will likely benefit from Ethereum’s planned switch in 2022 from proof-of-work to a proof-of-stake blockchain model that significantly reduces the environmental impact by no longer requiring that coins be mined via intensive computer calculations.

How Does Decentraland Make Money?

Decentraland makes money in three different ways: by selling MANA tokens, by issuing and selling LAND, and by other platform-based activities.

Decentraland’s business model is focused on increasing the value of MANA tokens by increasing interest and activity on the platform.

The primary way that Decentraland makes money is by issuing MANA tokens. When the platform was first created, the company raised $26 million by selling MANA. However, only a small portion of MANA was sold. The rest is being used to pay the platform’s developers and Decentraland employees.

Ultimately, Decentraland makes money when the price of MANA goes up, and they can sell MANA to users. They then use that money to pay for the platform’s expenses such as salaries and other costs. The goal of the platform is to get people to use Decentraland and buy MANA to use on the site. That is the foundation’s primary revenue stream.

Decentraland also sells LAND to Decentraland users so they can build on the platform. But this is just another way to drive up demand for MANA. In order to buy LAND, you have to buy MANA. The more developers and companies buy LAND and create games on Decentraland, the more users the platform will attract.

If the platform has more users, there will be a higher demand for MANA, increasing the price of the digital currency and allowing Decentraland to make more money from the project. The selling and development of LAND is so important to Decentraland that in 2018 it put $5 million towards helping companies who invested in LAND on the platform build their games and immersive experiences.

Decentraland participates in a number of activities that are directly or indirectly revenue generating for the company. For example, it also allows NFT artists to exhibit and sell NFTs on its platform. However, they don’t make a commission off sales made on the platform.

Instead, the company profits since the transactions took place via MANA through the increased demand for MANA.

Decentraland might also benefit from in-platform promotion of other digital currencies or digital asset projects.

Decentraland has been through a number of funding rounds and raised an estimated $51 million from outside investors in addition to the $26 million it raised in its ICO.[7] Venture capital firms such as Fundamental Labs, Broslyn Capital, Digital Currency Group, and Genesis One Capital are investors in the project.

However, details about the financials of Decentraland, its valuation, or its revenue have never been released publicly. Indeed, very little is known about how well Decentraland is doing or whether it will continue to need to raise funds via venture capital.

Since Decentraland is still a private company, its financials are not publicly available.

Because Decentraland is not a public company and has not released its financials, it is unclear if it is making a profit. While there has been a lot of speculative interest in Decentraland leading to the sale of virtual real estate, much of it remains underdeveloped.

Given its low user numbers, it’s unlikely that will continue without an increase in the development of the virtual real estate being bought. The blockchain gaming platform business model has yet to prove to be successful.

In this article, we’ve looked at how Decentraland makes money and what are the key elements of its business model. Decentraland is an ambitious project which, if successful, will change the way we think about virtual reality. Now it’s up to you to decide whether or not this is a platform you want to invest in.

We hope you enjoyed this deep dive into Decentraland’s business model! If you have any questions or would like to share your thoughts on how Decentraland makes money, please let us know.

If you’re interested in learning more about the project, check out their website and join the community on Discord.

In the meantime, thanks for reading, and good luck with your ventures in the virtual world!

24 Metaverse Statistics That Will Blow Your Mind