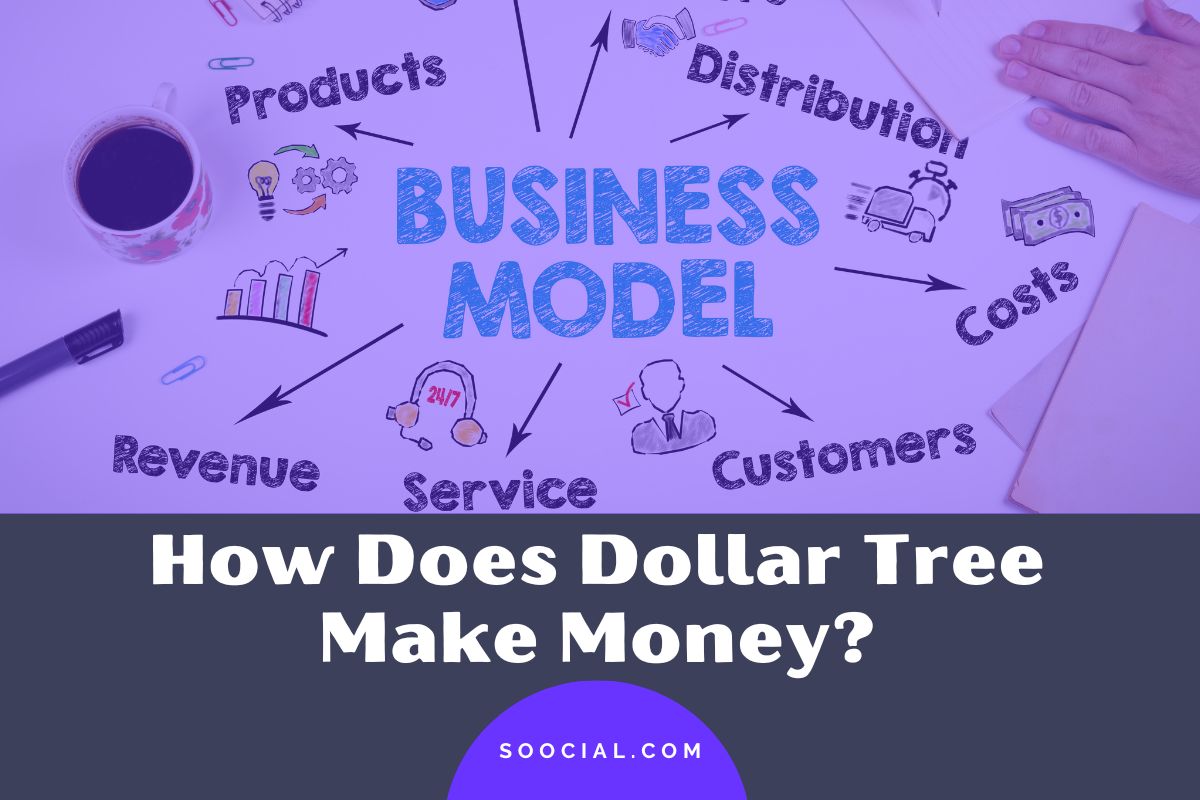 Dollar Tree is a popular chain of discount variety stores. Dollar Tree originally began selling products for one dollar or less. It has since had to increase its price point.

Founded in 1989 in Sumter, South Carolina, the company was started by Doug Perry, Macon Brock, and Ray Compton under the name Only $1.00. In 1993, the store name was changed to Dollar Tree so that the company could expand to multiple low-cost price points.

The company has become successful by ruthlessly sourcing low-cost products, keeping their costs low, and opening up near low-income neighborhoods. Over the years, the company has acquired a number of other discount stores and chains, including Family Dollar. It also opened an eCommerce platform in 2009 to sell its products online.

Dollar Tree (DLTR) is a public company that trades on the NASDAQ stock exchange. The company launched its IPO in 1995.

What is Dollar Tree & How Does It Work?

Dollar Tree is a popular dollar store chain that sells low-cost items in over 15,000 stores across the US and Canada. The company also has an eCommerce platform where customers can buy from them online. Dollar Tree has acquired a number of different dollar and variety store chains, including Family Dollar and Dollar Bills.

Many Dollar Tree stores also sell frozen foods and fresh items like milk and eggs. Many of these products are much lower in price than one might find elsewhere. This is sometimes because the items are in smaller sizes than they might buy elsewhere. They are sometimes also items that the company acquired because there was a surplus or were about to expire.

Shoppers at Dollar Tree like the store because they’re able to get low prices for things they need. Dollar Tree tries to keep as many items as possible in their store at $1.25 or a little above that. However, the company has been moving towards stocking more higher cost items. This has expanded their inventory and delighted customers, who like having more high-value products at a low cost.

Shoppers often like browsing the selections for cheap candy or décor items. However, Dollar Trees are not great places to do grocery shopping since the selection is focused around what the company could get produced at an extremely low price point. That means that Dollar Tree shoppers have less variety to choose from.

A 2021 study by Consumer Reports found that nine out of every 10 Americans shop at dollar stores at least a few times per year.[1] Among those who shopped at dollar stores like Dollar Tree at least once per week, 31% made under $30,000 a year in income.[2]

The study found that people who shop at dollar stores go there primarily to buy household goods and cleaning supplies, followed by home décor and party goods, and then food.[5]

Some people are concerned about dollar stores, and municipalities have even created laws to limit their expansion. For example, New Orleans restricted new dollar stores from opening within two miles of existing ones in certain areas. Many believe that they end up pushing out local grocery stores and creating food deserts.[6]

Dollar Tree’s business model involves selling high volumes of extremely low-margin products. Due to their low prices, the company makes very little off every transaction. They, therefore, have to carefully choose, source, and price their products. Then they have to sell them in extremely large volumes in order to make money.

The company does this via their network of over 15,000 discount stores across Canada and the US. This allows them to negotiate lower prices with large brand name manufacturers. Usually, they buy a smaller size than usual or a version of the product that is lower quality in order to save money. However, their high volume also means that many brands are willing to create products to sell to them in bulk.

Dollar Tree is also able to increase their margins slightly by designing and selling private-label products. Their size allows them to make very large purchases from overseas manufacturers in order to negotiate very low per-item manufacturing costs. The company then distributes those products efficiently to their networks of stores from their regional distribution hubs.

Dollar Tree does very little advertising. Indeed, they don’t have the margin to advertise. Instead, they locate new stores in low-income neighborhoods in order to attract low-income customers that are more likely to buy from them.

The company has a very bare-bones store design and operation. Their stores aren’t elaborately laid out or decorated. The company then runs their stores with very few staff in order to keep prices low. The company also does not have an expensive inventory management system in order to save additional funds.

Dollar Tree’s move into higher-value items is likely to see the company generate additional revenue as the margins on such products tend to be higher. Higher value items might also attract a different kind of customer who might be able to spend more on an average order.

The company’s low-value items have been the source of controversy. People have alternatively accused dollar stores like Dollar Tree of exploiting workers overseas and of selling unsafe products.[7]

Employees have also complained about the working conditions and low pay at the stores. Many managers have accused the company of extracting profits on the backs of overworked store managers who have to do unpaid overtime to keep the store presentable because of chronic understaffing.[8]

Dollar Tree’s low overhead and razor-thin margins mean the company has to cut corners. That also makes it hard for the company to absorb periods of inflation. When prices go up, there is often pressure for dollar store prices to remain steady.

Dollar Tree has a number of competitors. These include other dollar stores like Dollar General and also other low-cost retailers like Walmart or Target.

The company might strictly control its costs, but Dollar Tree still has considerable expenses around staffing, transportation, rent, and administrative expenses. In their fiscal year ending in January 2022, the company spent $5.9 billion on those expenses. The company also spent $18.5 billion on the direct cost of sales.

How Does Dollar Tree Make Money?

Dollar Tree makes money in two different ways. These are via the sale of merchandise and the sale of private label products.

Dollar Tree does not share a breakdown of their income by these two revenue streams in their annual report. While it is unclear how much they make from either of them, the company reported $26.3 billion in net sales and $11.4 million in other revenue.

Dollar Tree’s main source of income is the sales of products that they purchase from brands. They get these products at a very low cost from manufacturers in order to pass the savings onto their customers. These products are often lower-cost versions of brand name goods or smaller sized products.

They might also be products that are close to expiring that companies sells to Dollar Tree for a low price. Dollar Tree and its other dollar stores then makes money on the difference between what the company paid and how much they sell the items for.

While they make very little on each individual item, the company is able to generate significant revenue through high volume of sales.

Dollar Tree is able to increase their margins and diversify their product offerings by creating private label items. To create these, the company contracts with overseas manufacturers. They look for low-cost items that they can produce large quantities of for their stores. They then negotiate a discount based on the volume that they intend to purchase.

By creating private label products, Dollar Tree has more control over the type of products they offer in their stores. They also are able to make higher margins than they would if they were purchasing those products from a manufacturer.

Dollar Tree (DLTR) is currently a public company trading on the NASDAQ exchange. As of August 2022, the company’s stock traded for around $144.45 with a valuation of $32.35 billion. The company has long been a public company, having launched its IPO in 1995.

While there is little data available about Dollar Tree’s venture capital funding prior to its IPO, the company raised a post-IPO round of funding in 2019. Dollar Tree raised $370 million that year from one investor, Starboard Value.[9]

Starboard bought a stake in the company before seeking majority control of the board in order to pressure the company to sell Family Dollar. However, Starboard lost that fight and walked away.[10]

Dollar Tree’s results from the last three years show a company with highly volatile expenses and little revenue growth year-over-year. It is concerning that the company made less money year-over-year despite growing its income.

Dollar Tree is profitable. The company made $1.32 billion during their fiscal year ending on January 2022. However, that was a decrease from the year before, when the company posted a net income of $1.34 billion.[14][15]

The company has struggled in recent years to grow their revenue with only minor increases in revenue year-over-year. That lackluster growth might spell trouble for the company in the future, especially given that their profitability seems to be eroding.

The high inflation many sectors are experiencing in 2022 might be affecting the company as they get squeezed on production and purchasing costs for the private label and branded items they sell.

Dollar Tree has built its business by offering its customers what they want—cheap products—while also providing them with quality service. This is what sets it apart from its competitors: Dollar Tree doesn’t just sell things cheaply; it sells them well.

So, what does the future hold for Dollar Tree? How will they continue to grow and compete in a world where every day more and more people are becoming aware of the value of their time and money?

The answer is simple: they will continue to offer low prices on products that people need.

That being said, there are some concerns about their future as they are facing increased competition from other discount retailers and grocery stores. The competition is fierce, but Dollar Tree has proven itself as a true competitor in a very competitive industry.

Their new product offerings seem to be helping them stay afloat. They are also continuing to expand into new markets and adding new stores, which should help increase their sales numbers in the future.

How Does Costco Make Money? Business Model of Costco