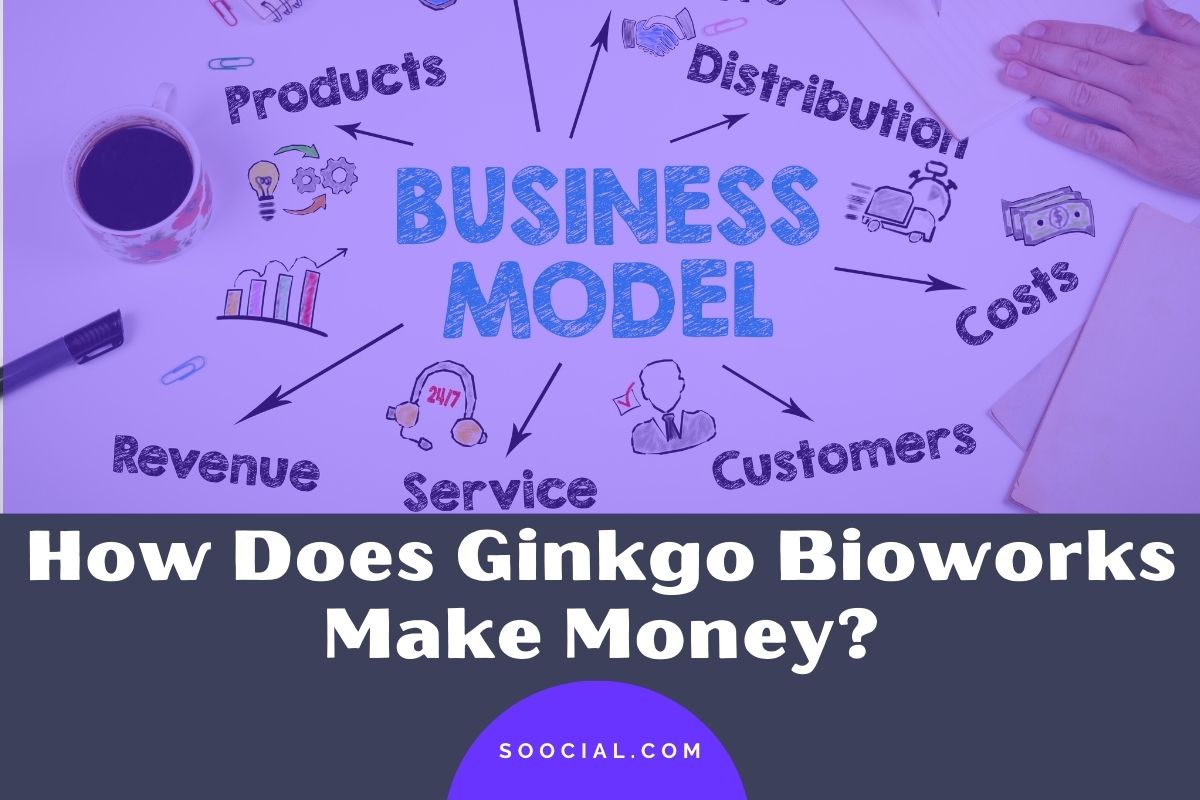 Biotech is a trillion-dollar industry that is full of startups trying to come up with new biological solutions for some of the most complex problems. One such company is Ginkgo Bioworks that has made quite a fuss in the world of synthetic biology and genetic engineering.

Synthetic biology is still pretty new, and some could argue a controversial, industry. But this hasn’t stopped Ginkgo Bioworks from getting quite popular. Ginkgo Bioworks is one of the most well-funded biotech startups around, with a hefty $790 million in funding since its launch in 2009.

With its announcement to go public, it has created a lot of buzz in the market and raised a whole lot of eyebrows from investors who are curious about how it makes money. If you too are wondering about their business model and the ways it earns revenue, this article has all the answers you are looking for.

What makes Ginkgo Bioworks unique is that they are irreplaceable. There is not too much competition out there because there are not too many companies that can do genetic engineering while maintaining a high level of safety and security.

Furthermore, they profit from this partnership “coming and going”, both from the fees for their services and from the equity that these companies have to give them in any successful projects.

Ginkgo Bioworks is able to create these partnerships because there is one area in which most biotech companies cannot compete, genetic engineering. Unlike writing code for a computer program, re-writing the code for a living cell is very expensive.

For computers, writing code involves a small amount of electricity and the time invested by the programmer. Even office space is not much of an issue anymore because the pandemic has taught us that programmers and other IT specialists can still perform quality work, regardless of whether they are in the office or working remotely.

Rewriting the genetic code of a living organism is, as The Wizard of Oz would put it, a horse of a different color. It will probably be a long time before biologists and genetic engineers can rearrange the proteins and DNA within living cells from the comfort of their own kitchens!

Rather, this “genetic writing” needs to take place in state-of-the-art, maximum security facilities with the appropriate climate controls needed for fermentation, lest some virus of COVID-like proportions escape from a biotech lab and cause an uncontrollable pandemic.

It is possible that some of these biotech companies could try to save some money with their DIY (do-it-yourself) genetic engineering kits but think of the societal risks involved. If a man-made super-virus were to escape from such a lab, that could cause a worldwide pandemic that could be very difficult to immunize against and result in global lockdowns.

Because Ginkgo Bioworks is completely focused on genetic engineering and guarantees the security and efficiency of their foundries, biotech companies do not have to worry about such responsibility.

In fact, because robots are more precise and less error-prone than humans, a great deal of the manual labor that is done on these living organisms is performed by robots that have been designed specifically for this task.

Furthermore, if only a handful of companies are actually doing this genetic engineering, it is probably safer for the public good.

If a few large, specialized, modernized companies are doing the genetic engineering, world governments can monitor them closely because they do not need to send their observers to several different places and these large, billion-dollar companies have a lot to lose if they are found to be in violation of safety procedures that are so essential to global health.

The alternative would be hundreds of “mom-and-pop shop” genetic engineers, each requiring government oversight. In such a situation, the government can be right 99% of the time and only make a mistake with one or two companies, and still witness another deadly pandemic.

How Does Ginkgo Bioworks Make Money?

With this model, the exciting projects that Ginkgo Bioworks is involved in are the revenue streams for both fees and equity.

They currently have over 70 projects and will have over 500 in the near future. Obviously, those are too many projects to list but here are some of the best known:

You are probably familiar with the COVID-19 vaccines made by Pfizer and Moderna. What you might not know is that these vaccines were optimized in partnership with Ginkgo Bioworks.

Those particular vaccines are using genetically engineered mRNA. This mRNA trains cells within the subject’s immune system to produce the specific proteins needed to fight the virus. Nobody does genetic engineering better than Ginkgo Bioworks and that is why they were needed for this historic undertaking.

Thanks to the work done by Ginkgo Bioworks, a whole new world is opening up for “nucleic acid vaccines”, the genetically engineered vaccines of the future. In addition to COVID-19, nucleic acid vaccines can potentially be used to prevent flu, HIV, and even possibly some forms of cancer.

Ginkgo Bioworks has also been very active on the testing front:

Other projects to combat future pandemics include:

Conspiracy theorists have argued that vaccines are dangerous because they are genetically engineered to “re-write our DNA”. It probably was not helpful that the writers of the website for Ginkgo Bioworks stated “At their core, nucleic acid vaccines are injectable DNA code”.

The key takeaway from this are the words, “At their core”. This writer probably assumed that the general public did not know what RNA is and therefore it would be better marketing to refer to RNA as DNA. This has had an opposite effect regarding putting the public’s mind at ease. In actuality, Pfizer and Moderna vaccines are not using DNA code; they are using mRNA code. For public safety, that difference is night and day.

DNA resides in the nucleus of a cell and for that DNA to be altered by some other DNA, that new DNA, the messenger DNA, would have to also enter the cell’s nucleus and change the structure of the organism on a cellular level, basically making a new creature and causing any offspring produced by that creature to be genetically re-engineered offspring.

RNA, however, does not reside in the nucleus, but in the cytoplasm of the cell. When mRNA, messenger RNA, is injected into a human seeking vaccination, the messenger RNA makes contact with the person’s RNA within that person’s cells and trains those cells to make special proteins to protect against COVID-19. It does not, however, enter the nucleus of any cell and therefore does not change the DNA of any human seeking vaccination.

Many vegetarian/vegan activists have made the case that supplementing the beef/dairy industry is bad for the environment. Ginkgo Bioworks has been bioengineering various animal proteins so that they can be added to the DNA of plant-based foods.

For agriculture, Ginkgo Bioworks has been genetically re-engineering microbes. The concept of crop rotation has been around since ancient times. Farmers have always known that some crops, such as corn and wheat, tend to deprive the soil of nutrients, while other crops, such as soybeans and peanuts, actually replenish the soil. The problem is that it is the “cash crops, meaning the crops with the most lucrative markets, that tend to do the most damage to the soil.

Regarding fermentation and cannabinoids, Ginkgo Bioworks has invented a new kind of beer. By combining the DNA from cannabinoids with the DNA from brewer’s yeast, they are producing a marijuana beer.

The funding of the Boston, MA-based biotech company has increased exponentially over the years. During 2015, from March to July alone, it quintupled. Then, it doubled the following year and nearly tripled the year after.

Ginkgo Bioworks is not profitable yet as the company continues to spend on research and development. The operating costs continue to outpace revenue and will likely remain so for the foreseeable future.

Nevertheless, their revenue has been consistently growing and is projected to nearly double in 2021.

Also, there have been exponential increases in funding and valuation which allow the company to engage in fundamental research on synthetic biology applications.

It should also be noted that the projects of Ginkgo Bioworks have attracted some of the most renowned investors on the planet:

Having read this article, you should have a solid understanding of the business model of Ginkgo Bioworks.

We hope that this article has not only given you a great understanding of how Ginkgo Bioworks makes money, but also a glimpse into the world of synthetic biology and what it could mean for our future.

As we discussed, Ginkgo Bioworks is the world’s leading organism design company. The firm uses biotechnology to develop genetically engineered organisms that have tons of applications like making fragrances, biofuels, and food ingredients.

It’s clear that Ginkgo Bioworks has great ambitions for the future of their company. Ginkgo Bioworks’ growth and success in the world of biotech are impressive.

Companies like Ginkgo Bioworks are the embodiment of the future — a world where biotechnology becomes more advanced and human beings harness new tools to fight diseases and do amazing things.

The big hope is that all of this advancement in biotechnology will help us cure cancer, deal with environmental issues, or supplant our dependency on fossil fuels with cheap, green biofuels derived from living cells. Whatever your take on these ideas is, it looks like you’re going to have a chance to be a part of a wild ride as we open the door to a new frontier.

Thanks for reading this article. We hope it was helpful. If you have enjoyed it, then think about sharing it with someone else who may also benefit from reading it.

Have a wonderful day!

How Does 23andme Make Money? Business Model of 23andme

How Does Verily Make Money? Business Model of Verily

27 Designer Babies Statistics That Every Parent Must Know