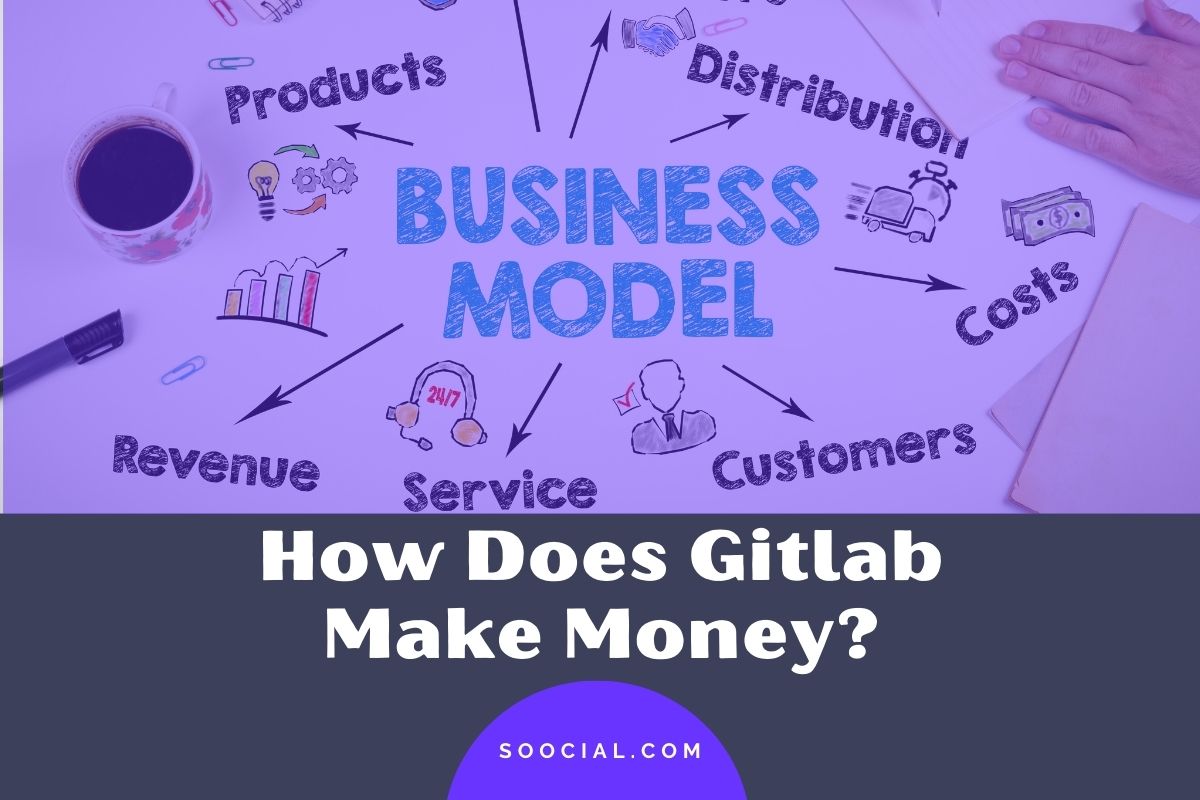 Gitlab Inc, a San Francisco-based firm behind a code repository management platform, has been a source of interest for many techies. GitLab’s popularity has exploded in the past few years and is used by more than 100,000 organizations. It counts high-profile tech companies like Google, Red Hat, Nikon, IBM, Alibaba Cloud, and Mozilla among its ranks.

But how does Gitlab makes money? Well, this is what this article is all about. This article is meant to dive into its business model and find out how Gitlab generates revenue. So, without any further ado, let’s begin.

Gitlab operates on an open-core freemium business model. It makes money through subscription fees and add-ons for its DevOps platform services.

Gitlab is an open-source DevOps platform. More specifically, Gitlab is a web-based DevOps lifecycle tool that provides a Git repository manager with wiki and issue tracking features. This is not just a normal SaaS or freemium, however, because of its slightly different business model.

The business model of Gitlab is open-core. As a DevOps platform, Gitlab runs on open source code. Even though the code is open-source, it is still monetized through additional features that people choose to purchase if they want a higher level of service.

The initial free version of the software services offered by Gitlab are free and open-source. Since the code is open source, it is developed by an online community and, thus, must be free.

That is how an open-core model is monetized. The basic packages that are used to sell the customer on the product are open source and free, while the more advanced features are proprietary and premium.

The way the coding aspect improves on the freemium model is that any open source product is going to have access to a wide pool of developers because they want to use a free product. Moreover they do not want to have to go through all of the steps needed to register and verify every time they use some proprietary software.

Rather than simply offer something for free and hope that people later want to by, an open core product taps into the very large community of open source developers and users that not only will be interested in the product, but might actually improve the product’s functionality by adding more open source code to the software and its repositories.

Gitlab is a DevOps platform that uses open source code. To understand what that means, one must understand DevOps.

DevOps is a philosophy that believes in streamlining the relationship between development and operations within an organization. Development is the writing of code for software, programs, apps, sites, etc. Operations are day-to-day maintenance functions and include security, compliance, IT, etc.

The reason why DevOps exists is because there, historically, has been a lot of friction between development and operations departments within a large number of organizations. That is because the perspective of the development teams that create software is often very different than that of the operations teams that actually have to implement that software into the functioning of an organization.

Because the company’s open-core model targets open source coders, marketing is not a problem.

Probably the most effective marketing strategy for Gitlab is to target the open source community.  As long as their product is good, open source coders will want to use it and will promote it to other coders and any businesses that employ development teams.

DevOps teams and operations teams will also promote Gitlab if their product is good.

Gitlab also has a lot of influential cloud partners that can assist them in many ways, including marketing. These partners include but are not limited to:

Because Gitlab is not really a brick-and-mortar business, they save on a lot of costs. As with any platform, Gitlab needs to pay for technically skilled staff, their energy expenses, and the maintenance of their equipment.

In addition, Gitlab has the expenses of any other platform:

Regardless of the fact that Gitlab is not a brick-and-mortar business, their expenses have been increasing at a rate large enough to eat their profitability.

According to Pitchbook, Gitlab’s expenses have actually been increasing while their revenues have been decreasing. In fact, Gitlab has been operating at a net loss at an increasing rate.

Even though Gitlab has been operating at a net loss, it has recently opened as an IPO on the Nasdaq and that might change things. Its grand IPO premiere was on October 14, 2021, so some time will be needed to see if being traded will be the path to profitability.

Gitlab is in no hurry, however. According to Forex.com, Gitlab is on the 30-year plan to “become the most-used collaboration tool for knowledge workers in any industry”.

How Does Gitlab Make Money?

Gitlab makes money through use of its subscriptions and add-ons. These services give access to its DevOps platform and Git repositories, which offer features like:

As an open-source product, it is distributed under the MIT license. Its premium features, however, sometimes include proprietary software written in closed source code.

All plans have unlimited (private) repositories. They can be used as a SaaS or can be self-managed. Add-Ons are also available.

The Free subscription package is absolutely free with no expiration, forever, according to the company website. The price is $0 with no credit card required.

With Add-Ons, users can buy additional CI/CD minutes or storage for their groups or personal namespaces. Repository storage of up to 10GB per project is free across all tiers.

In late 2018, Gitlab became the first partially Ukrainian unicorn in history with a $1 billion plus valuation. Then, about a year later, its valuation nearly tripled. Finally, within three years of obtaining unicorn status, Gitlab’s valuation has increased 10x!

Revenue has actually been declining, according to Pitchbook. The $81 million plus revenue for fiscal year 2021 was only a little more than half what it had been in for the fiscal year of 2020.

GitLab has been operating since 2011, but has not yet become profitable. The company is growing rapidly but spending a lot of money to expand its business.

According to Pitchbook, Gitlab is nowhere near the “break even point”.

As stated earlier, Gitlab has actually been operating on a net loss. This may change since their recent IPO on the Nasdaq during October of 2021.

The thing to understand is that AWS is a cloud platform partner for Gitlab. Obviously, AWS is a subsidiary of Amazon.

Amazon’s original business model was to lose money for twenty years and destroy the competition on pricing. After this period, Amazon knew that it and its investors would recoup their losses several times over by operating within a relatively competition-free market.

In a natural business environment that would not be possible. However, if your business has a powerful investor that allows you to absorb losses for twenty years until your competition goes bankrupt, you do not need to turn a profit any time soon.

Conclusion: How Does Gitlab Make Money?

In this article, we explained the business model of Gitlab as well as its pricing plans and how it makes money. In addition, we have also mentioned the fundings it received, its valuation, and the revenue it generated in the last few years.

We’d also like to mention that while the company generates the majority of its revenue through SaaS/enterprise offerings, it still provides its open-source product for free so developers can try out the tool without spending a dime.

Well, you made it! You’ve reached the end of this article, and hopefully, you’ve found it useful. If you have any questions regarding this article or have any feedback for us, feel free to drop us an email. We would love to hear your feedback.

Thanks for visiting, and have a great day!

How Does Postman Make Money? Business Model of Postman

How Does Webflow Make Money? Business Model of Webflow