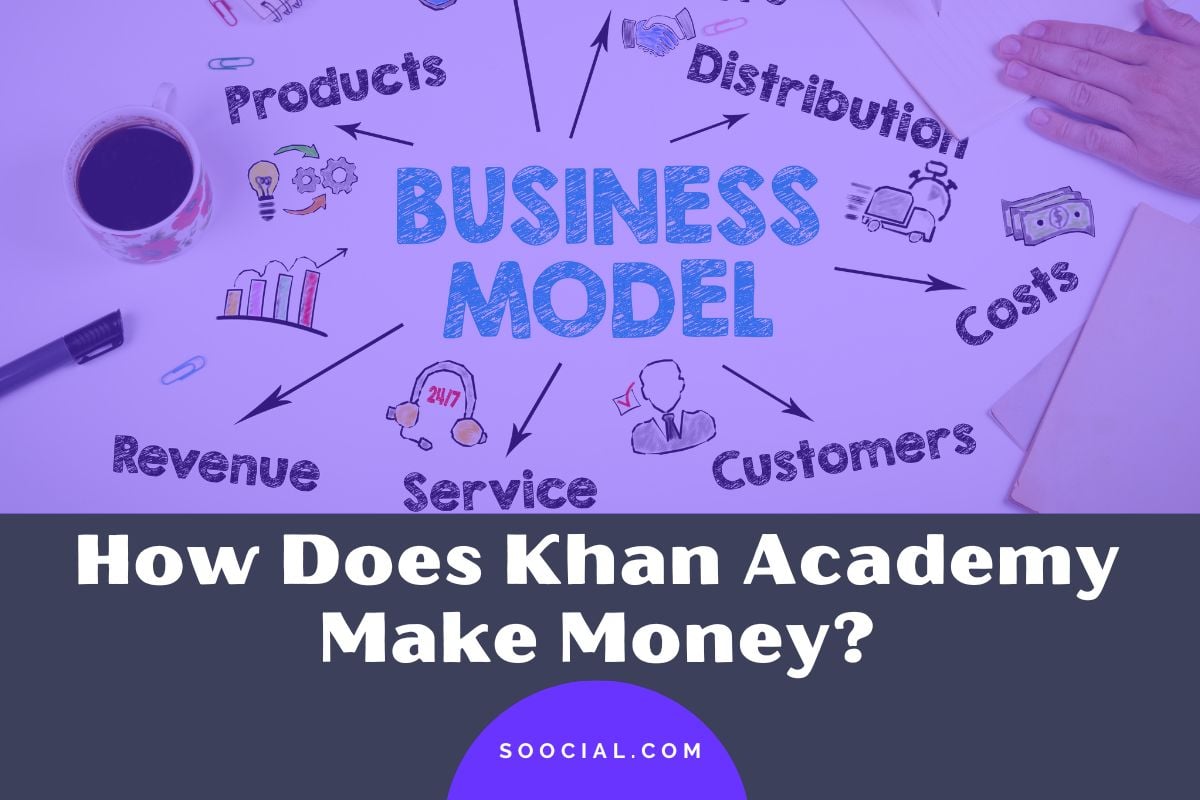 Khan Academy is one of the most popular online learning platforms in the world. The nonprofit organization reaches tens of millions of students a month.

Khan Academy primarily makes money via donations and grants. However, the nonprofit also makes money through things like tuition fees for the Khan Lab School and partnerships on SAT prep courses.

Founded in 2008 by Salman Khan, Khan Academy is a non-profit educational organization. Specializing in short video lessons, the organization’s website has a number of lessons and supplementary practice materials to support educators and individual students.

Khan founded the non-profit after graduating from MIT and Harvard Business School. He uploaded some videos to YouTube to help young relatives who needed tutoring support and the videos took off. After getting millions of views, Khan decided to quit his job and work on Khan Academy full-time.

What is Khan Academy & How Does It Work?

Khan Academy is an online educational platform that focuses on providing interactive and video content for free to people around the world. The organization’s education materials are available in 190 countries, and over 50 million students have benefited from the free content.

Education materials on the site are targeted towards elementary and high school students. Videos are typically between five minutes and 20 minutes. After students watch educational videos on the site, they are then prompted to take a quiz to ensure they digested the material they just learned.

While students can use the lessons on their own to study for tests or learn the material, the site is also used by teachers to help animate lessons. Parents homeschooling their children also use the site.

Khan Academy provides content in over 40 languages, including English, French, Mandarin, and Spanish. Children around the world can therefore benefit from the nonprofit’s offerings. This mission led the organization’s founder to earn the nickname the ‘world’s teacher.’[1]

Khan Academy covers a number of educational topics, including Math, Science, Economics, History, Art, and Computing. While Khan Academy was founded on YouTube in 2008, the nonprofit launched its own website, and Salman Khan started uploading his videos there.

The site was particularly popular in 2020 at the height of the COVID pandemic when many children were forced to learn from home. That helped the site gain more recognition and users. Even after many students have returned to the classroom, the website remains popular.[2]

The nonprofit started offering free SAT prep courses in 2014 in partnership with College Board. Their SAT Prep content includes information about what to expect on different parts of the test, tips on strategy, tools to help study, and practice tests. Khan Academy has since expanded its partnerships to offer test prep help on other standardized tests like the LSAT.

The school features class sizes of just 10 students and a total of just 230 students at the school. Unlike conventional schools, the Khan Academy School runs year-round. The schools also operate on an extended school day where students are at school for 9.5 hours per day. [3]

The Khan Lab School is focused on what it calls mastery-based education. This involves mastery-based, mixed-age, blended learning. The school does not give out traditional letter grades but instead provides students with a Mastery Transcript detailing what skills they have mastered.

Khan Academy is not a business, it’s a non-profit. For that reason, the organization has a very different ‘business model’ than many other sites focused on providing educational content to kids. Khan Academy is not focused on making money off its endeavors. Instead, it’s focused on covering its expenses and expanding its program to help more people.

The nonprofit relies on donations to grow its program and to pay for its ongoing expenses. Khan Academy wouldn’t be as big as it is today if not for the generosity of its many donors. One of Khan Academy’s first major donors was Ann Doerr, the wife of venture capitalist John Doerr. She sent Khan a donation for $10,000.[4] She later increased that donation by another $100,000 the same year.

Doerr, who is currently the Chair of the Khan Academy’s board of directors, was able to help Khan connect with others in Silicon Valley. Khan Academy has since received donations from many famous CEOs. Bill Gates gave Khan Academy $1.5 million and then another $4 million. Google gave Khan $2 million and Reed Hastings, the CEO of Netflix gave him $3 million.[5]

Many of these donors felt like Khan Academy was using the web in a creative way to expand the meaning of education. Donations continue to roll in, including a $5 million donation from Elon Musk when Khan Academy was overwhelmed with traffic in 2020 due to the pandemic.[6]

Khan is an excellent fundraiser for Khan Academy. He has given a number of talks, including a 2011 Ted Talk that helped open doors among tech philanthropists.[7] The board of Khan Academy also has a number of people who are well-connected in Silicon Valley and help with fundraising.[8]

Ultimately, Khan Academy’s main business model is to offer a much-needed, free educational service for children. People who believe in the nonprofit’s mission have supported the company to ensure it can continue to support Kids.

However, the organization also has other business models that bring in income. For example, the Khan Lab School brings in income via tuition fees. Tuition for 2022/20223 is $29,950 for the lower school, $32,600 at the middle school, and $33,600 at the high school.[9] The school offers financial aid based on a family’s demonstrated need.

The company also makes money off of test prep courses. While the courses are free, Khan Academy is paid by its partners to provide educational support for students looking to study for those tests. These include SAT and LSAT prep course materials.

While Khan Academy is a well-known charity, has a few independent sources of income, and also has a dedicated donor base who gives consistently, the nonprofit is at risk of large increases in expenses or downturns in donations.

For example, in 2020, the large traffic surges Khan Academy experienced required the organization to urgently fundraise for more money to pay for its increased costs. While donors came through, like any non-profit the organization could see a downturn in donations in the future that could interfere with its operations.

Khan Academy has considerable program and administration costs. In 2020, the nonprofit spent $59 million on expenses. However, the organization had $79 million in revenue that same year. That was up from $46 million the year previously.[10]

Whether the non-profit can continue to generate that same amount of donations and revenue remains to be seen. If donations dip, the organization might be able to look at other monetization strategies. For example, the nonprofit could likely make a considerable amount of revenue running digital and video ads on its site.

How Does Khan Academy Make Money?

Khan Academy makes a large portion of their revenue from donations from philanthropists. While anyone can donate to Khan Academy, the organization has a considerable number of large corporate and individual donors.

In 2020, Khan Academy had 21 donors who gave more than $1 million to the organization. These donors include Ann and John Doerr, Bank of America, AT&T, the Bill and Melinda Gates Foundation, the Elon Musk Foundation, and Google.org.[11]

Khan Academy runs a private non-profit school for kindergarten aged kids through grade 12. The school charges tuition fees to students who are enrolled.

Khan Academy is not a for-profit company, so it doesn’t have a valuation. The company’s funding comes from donors or earned income and can vary significantly from year to year.

Khan Academy is a non-profit focused on providing free educational content to students in elementary. middle, and secondary school. As a non-profit organization, the organization does not try to be profitable. However, in both 2019 and 2020, Khan Academy raised more money than they spent.

If Khan Academy was a for-profit company, there is a good chance that it would be profitable, given the quality of the content it offers and the number of users the site attracts.

This article has covered everything you need to know about Khan Academy’s business model, from its origins and what it offers students to its approach to monetization and how it plans to continue growing.

In summary, Khan Academy offers a unique and valuable resource to the world in the form of free online education. Khan Academy is dedicated to making education more readily available without charge. The world has benefited tremendously from this education based operation.

The business model of Khan Academy is unconventional but proves to be able to successfully support its type of organization. Giving lectures online for free is unique, and it gives those who couldn’t afford education the opportunity to learn.

The effectiveness of the model can be seen in the number of Khan Academy’s users – over 18 million people use their website every month.

20 AI in Education Statistics To Rethink How You Teach