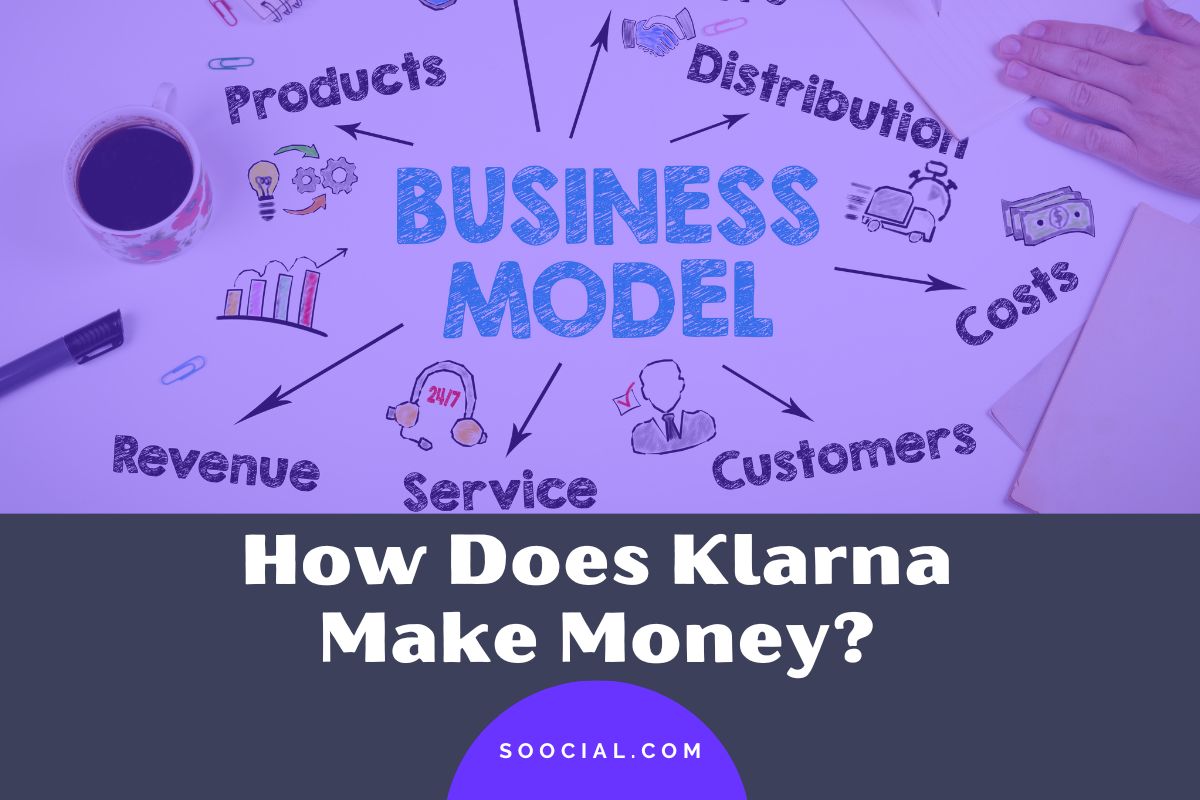 Klarna is a fintech company that offers consumers the ability to buy a product or service now and pay for it later.

Klarna primarily makes money by charging retailers a percentage of all transactions they process as well as a small flat fee. The company also makes money from their Klarna card, interest on the cash they hold, and interest from consumers who borrow money from them over longer loan terms.

Founded in 2005 by Swedish entrepreneurs Niklas Adalberth, Victor Jacobsson, and Sebastian Siemiatkowski, Klarna is one of the world’s largest and most popular consumer buy now, pay later (BNPL) offerings.

What is Klarna & How Does It Work?

Klarna is a fintech company in the alternative payments and credit space. The exact type of credit that Klarna offers is called consumer buy now, pay later credit and is typically offered on online purchases at the retailer’s point of sale or checkout.

The company’s revenue streams include transaction fees and payments from retailers but also interest from consumers.

Buy now, pay later companies allow customers to buy a product today and pay for that product over a period of time by making several payments. Typically, if the customer makes all the payments on time, there are no interest charges or late fees for the service. However, if they are late or need more time, many buy now, pay later companies start charging consumers interest.

Klarna offers three products for its buy now, pay later offerings. Pay in 30 Days, Pay in 3 Installments, and Financing. With both of the first two products, Klarna is paid by retailers. Retailers are motivated to offer the service since studies show that offering it results in more sales and higher average sales per purchase.

With Pay in 30 Days, customers are extended credit with no interest fees or late fees. The same thing is true about the Pay in 4 Installments option, which gives customers 6 weeks to pay for their purchase interest-free. Customers make a payment when they checkout and then every two weeks.

With Financing, customers who want longer-term financing for larger purchases can get 6 to 36 months to repay their purchase at an interest rate of up to 19.99%.[1]

Klarna decides whether it will extend credit to a particular user by performing a soft credit check for each credit application and a hard credit check with a user who originally signs up for Klarna. Usually, the credit decisions take just seconds, and the consumer can finish checking out. The companies will then pay a flat fee and a percentage of the transaction to Klarna.

Klarna is also unique among buy now, pay later companies in that it offers in-store payment options at prominent retailers like Macy’s.

Companies in the consumer buy now, pay later space claim to be offering more flexibility and better options than purchasing via a credit card.

In some ways, they are like payment companies as they make money primarily via transaction fees and flat fees for each purchase. Indeed, for companies, the cost of Klarna is usually similar to what they would pay for processing premium credit cards.

It can also replace financing offered by ecommerce companies directly to their consumers, creating a significant savings for a company. Companies also get paid immediately by Klarna, who then accepts the credit risk of fronting the rest of the payment.

But buy now, pay later companies are also alternative lenders. While the terms of Klarna’s shorter term financing offers charge no interest to consumers, the interest rates for longer-term financing range from 0% to 19.99 APR. This is similar to the cost of credit card debt.

The benefit for the consumer is that Klarna uses different criteria than many credit card companies in deciding how much credit to extend to a customer and at what rate. That could include previous borrowing and repayment by the customer via Klarna.

Klarna has partnered with payment processor Stripe in order to accelerate their penetration into the market. Stripe now allows small and medium businesses the ability to easily integrate with their Stripe payment processing infrastructure.

The challenge with the buy now, pay now business model is that it is easy to replicate. That means that Klarna has a number of competitors. Companies like Affirm and AfterPay hold a significant part of the market, which is now relatively competitive. Legacy payment processors like PayPal and technology companies like Apple are also now offering a Pay Later option.

These companies are essentially trying to undercut each other with better terms for merchants and for consumers. For example, some of Klarna’s competitors offer fixed fees lending with no late fees. Or lower interest rates on longer loans.

Right now, companies like Klarna are trying to expand into more markets to gain more market share and revenue. Klarna has somewhat of a headstart around this since they started in Europe and have had a successful US expansion.

However, Afterpay, a key competitor, is owned by the enormous payment processing company Square. That could make it harder for companies like Klarna to compete given how well-financed Square and its parent company Box are.

Ultimately, BNPL companies are in a race to outpace each other on key metrics that indicate market saturation. These include the number of active consumers using their payment platform, how many global merchants they have, and the total amount of transactions they process. In 2021, Klarna had 147 active consumers, 400,000 retail partner, and processed $80 billion in sales.

Klarna also has considerable staffing, sales, marketing, and development expenses. In 2021, the company made $1.42 billion in total revenue but had a total of $733 million in losses after accounting for expenses.[4]

Whether Klarna’s 2022 results will be in the black has yet to be seen but it looks like Klarna expects losses in the future related to their ongoing expansion.

Klarna’s business model is focused on increasing the number of people and merchants who use their platform. That way they can increase the amount of money they process and earn income on. However, winning the race to get more consumers and merchants costs significant money.

How Does Klarna Make Money?

Klarna makes money in four different ways. These include merchant fees, interchange fees on Klarna cards, interest on consumer loans, and interest from the cash they hold.

While Klarna made a considerable amount in revenue in 2021, the company does not break down the source of their revenue by revenue type. It is unclear how much Klarna makes from each of these revenue streams.

Klarna charges fees to merchants who offer their customers buy now, pay later options on their purchases at the point of sale. Klarna charges merchants a fixed fee of $0.30 and then a percentage of the transaction up to 5.99%. This is the same for both in-store and online purchases.

In return, Klarna provides flexible payment options that increase a merchant’s sales and pays the merchant the funds immediately. This makes up a significant portion of Klarna revenue.

Klarna has a card that they offer to consumers that allows them to make purchases in 4 payments at any store. They charge a monthly fee after the first year of $3.99 per month and late fees on missed payments. This is a great way to get consumers to use Klarna more often and boosts their merchant fee revenue.

Klarna offers users who want to borrow money for longer periods of time the option to take out a loan for 6 to 36 months. These loans charge between 0% and 19.99% APR.

That means that Klarna earns interest on their loans and also charges late fees. It is unclear how much revenue they earn through interest and fees charged to consumers.

As a company that has to keep considerable working capital on hand to lend, Klarna also earns interest on these funds when they’re not being used. However, they can also lose money on these funds if they make a bad investment or in the case of currency conversion losses.

In total, the company has raised $4.5 billion over 27 funding rounds.[7] Investors in the fintech company include Sequoia Capital, WestCap, Softbank, and others.[8]

While Klarna has faced financial losses over the last several years, this was expected as the company is in the midst of a massive expansion into new territories.

Klarna’s results for the last three years show increases in revenue but also an alarming increase in losses.[9] While this was planned due to expansion expenses, it is likely one of the reasons why investors sourced in 2022 on the company.

Klarna is not profitable, but neither are many of its buy now, pay later competitors. The industry is very capital intensive, and most players are in the midst of expensive and aggressive expansions that Klarna is trying to keep pace with. The company booked a loss of $730 million on profits of $1.42 billion in 2021.

Another significant tailwind that will hit the buy now, pay later sector in 2022 are borrowing costs. Interest rates are rising, and that means that companies with this business model will struggle to borrow money in order to deploy it to make loans for the new business they gain.

We hope you’ve enjoyed this case study of Klarna’s business model and how Klarna makes money. Klarna is one of the hottest fintech startups out there that has disrupted the traditional payments system and created a new, innovative way for people to shop online that benefits both consumers and businesses.

We hope you enjoyed the article and learned something new about Klarna’s approach to business. If you did, please consider sharing this article with your friends and family on social media! Also, be sure to check out our other blog posts on business models, as well as our extensive collection of articles on other companies.

How Does PayPal Make Money? Business Model of PayPal

How Does Stripe Make Money? Business Model of Stripe

How Does Afterpay Make Money? Business Model Of Afterpay

How Does Splitit Make Money? Business Model of Splitit