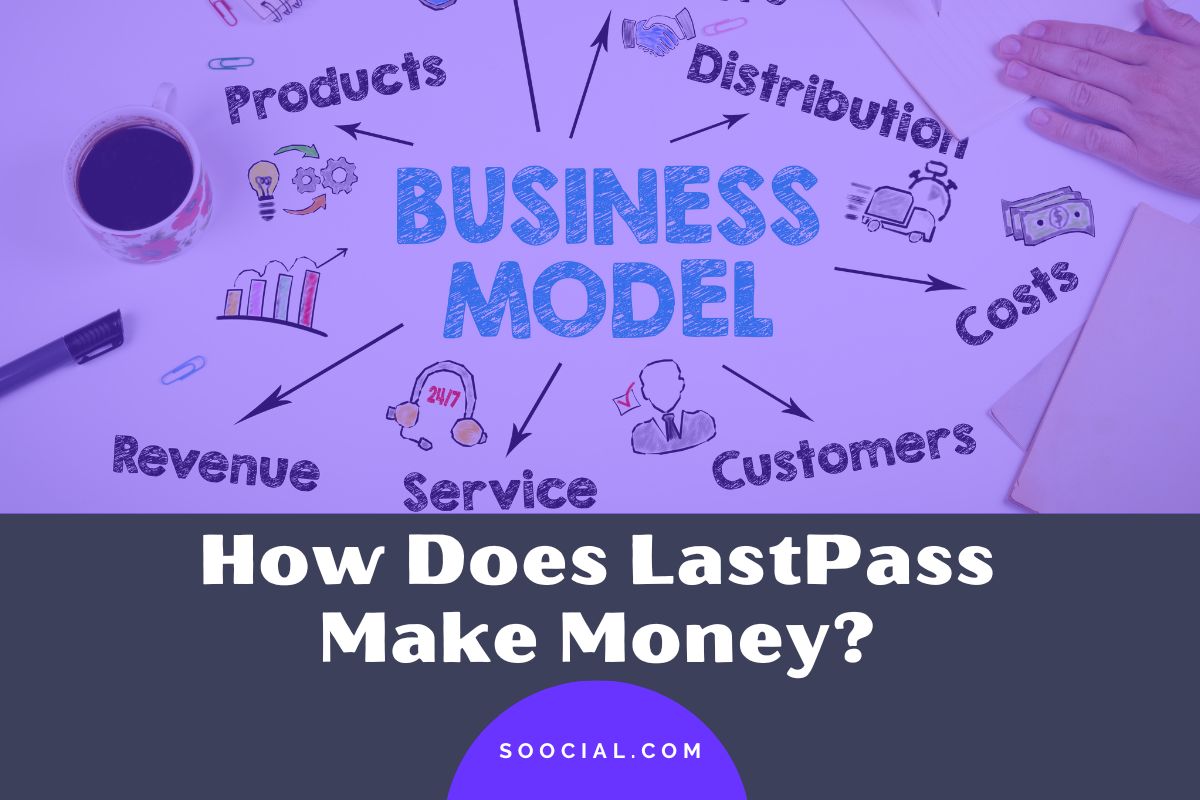 LastPass is a freemium software as a service (SaaS) company offering password and identity management. The company makes money by charging for premium products.

LastPass primarily makes money from their advanced password and online security products for businesses. They also make money by providing two individual subscription options in addition to their free app.

LastPass was founded by Joe Siegrist, Andrew Zitnay, Robert Billingslea, and Sameer Kochhar in 2008 to provide a solution for a common problem. Internet users have many accounts that require authenticated login using a password. If unique, secure passwords are used for each account, it is impossible to remember all of them. Before software like LastPass was developed, people would usually write their passwords on a piece of paper. This presented security concerns.

What is LastPass and How Does it Work?

LastPass is a software as a service (SaaS) company offering password and identity management. It also provides several unique online security and storage services. LastPass has grown into one of the largest password management platforms.

By using a secure server with end-to-end encryption, people are able to keep all their passwords safe using a single master password to access their data. The software also generates strong passwords to improve a user’s online security.

The remote work trend helped boost LastPass’s popularity as the app allows multiple users to access passwords for business accounts and share encrypted files. As a result, LastPass has become one of the top password management services with over 33 million registered users, including 100,000 businesses.[3]

Users can choose between a free version and two subscription options. LastPass Premium has several advanced features and 1 GB of file storage. Free users get a 30-day premium trial. The family package, which is preferred by businesses, allows up to six users to share passwords and files. Each user has their own vault in which to store information, which can be shared with others on the network.

LastPass can be downloaded and installed as a browser extension for PC and laptop users. Android and IOS apps are also available. Once the software has been installed on a device, the user creates an account using an email address and a master password.

When LastPass was launched in 2008, the free version could only be installed on one type of device. It could be used on either a PC or a mobile device, but not on both. In 2016, the free app was upgraded to support syncing between devices. It could be used on both PC and mobile devices. However, in 2021, the company reverted to its original policy. Syncing between devices is no longer possible for free users.

The LastPass dashboard is intuitive and easy to use. It simplifies processes like storing notes, addresses, payment cards, and bank accounts. The auto-fill function makes it quick and easy to fill out online forms requiring an address, email, phone number, and bank card details.

Cloud storage always raises concerns about security. To this end, LastPass uses the most advanced security algorithms. It uses a 256-bit key, which is virtually impossible to hack. The AES-256 encryption standard was established by the US National Institute of Standards and Technology. This system is used by banks and government security agencies to protect online data.

Despite the high level of security, LastPass cloud vaults are not impenetrable. There have been numerous security breaches between 2011 and 2022. The most recent hacking attempt was in August 2022.[4] With each incident, LastPass management has assured users that no personal information was stolen.

Ironically, it’s their tremendous success that makes LastPass a target for hackers. A large database with millions of users is an attractive opportunity for cybercriminals.

Many of the features provided by LastPass aren’t unique, particularly when using the free version. However, their top-tier subscription service, for families and small businesses, is arguably the best of its kind. These packages offer many features that are not available on browser password managers, like password sharing, dark web monitoring, and biometric technology.

Most browsers, like Google, offer free password storage and protection with auto-fill options. There are also many free apps that one can install to generate and store passwords. Like LastPass, they can be integrated with most browsers.

When compared to browser password managers, LastPass is generally more secure. It provides a second layer of protection by saving a user’s sensitive data on a cloud server. This means that if a user’s Google account is hacked, their passwords remain secure.

LastPass is also incredibly easy to use. Competing software, like Bitwarden, can be complicated. Most LastPass functions are performed with a single click. The free version allows users to store unlimited passwords, whereas many of its competitors limit the number of passwords. For example, Dashlane only provides storage for 50 passwords.

LastPass operates on a freemium business model. The company offers free software for saving and retrieving passwords, along with several other online security and data storage services. Products are monetized by user subscriptions for additional services or features.

Private users can choose between two types of annual subscriptions. Business clients are charged different rates depending on their requirements.

LastPass offers a free version to attract new users. Users of the free service are encouraged to sign up for the subscriber service through a free 30-day trial of the premium plan. This is a strategy used by most freemium service providers, including many of LastPass’s competitors. Business users get a 14-day free trial offer.

To stay ahead of the competition, LastPass offers added value with unique services and enhanced security. Dark web monitoring is a LastPass feature that is not offered by many of its competitors. Though Dashlane has a similar feature – and some say it’s better. Dark web monitoring alerts a user when their information is leaked in a data breach.

The Family plan allows 6 users to share passwords and stored data. Many of its competitors, like Bitwarden, only allow password sharing with one other user. They also offer unlimited devices and password storage for Premium and Family subscribers.

From the outset, LastPass has endeavored to make its software easy to use. This seems to be one of the primary reasons why it is so popular. The system is upgraded periodically, with new features, or to improve usability and speed.

LastPass also offers free email tech support to their paying customers and unlimited shared folders on their Family plan. Recently, an Authenticator app was launched, making it possible for users to login into their accounts without a password.

In 2021, when LastPass announced that only Premium and Family subscribers would be able to use their software on multiple devices, many customers were upset. While it is unknown how many users migrated to other platforms as a result, the decision will not affect revenue as paid customers are not inconvenienced.

Changes to the free platform should increase profitability. Users of the free software, who don’t want to change their service provider, will have to upgrade to the Premium package if they want to use multiple devices. Furthermore, an exodus of non-paying users frees up resources, like server space for expansion in the business market.

The LastPass brand is well-established, reducing the need to attract new free users. Instead, the emphasis has shifted to increasing the number of lucrative business clients. LastPass earns 75% of its revenue from corporate clients and aims to increase its market share in this sector.[5]

LastPass has been able to capitalize on the remote work trend with additional features, developed especially for businesses of different sizes, from – one to nine employees up to more than 3,000 employees. Apart from offering group sharing, LastPass also offers businesses unique admin, security, and analytics tools.

LastPass employs 384 people.[6] In addition to paying salaries, maintaining technical infrastructure forms a large part of operating expenditure. The company also has to pay for regular expenses, like buildings and utilities. These costs are covered by the income generated from private and business client subscriptions.

How Does LastPass Make Money?

While a free version of the software is available, this serves only as a gateway to attract new users. Free software users are encouraged to upgrade to one of two paid offerings.

Businesses can apply for specialized services on the LastPass website. Pricing for these products will depend on a company’s individual requirements. They offer a 14-day free trial for this service.

There are three different business plans:

LastPass also makes money via subscriptions. These plans include the company’s Platinum Plan and their Family Plan.

The Premium plan costs $3 per month and is billed annually, so users pay $36 per year.[7] Along with all the free features, the premium plan also offers:

The Family plan is suitable for families and small businesses. It grants multiple users access to passwords and encrypted files. It costs $4 per month ($48 annually).[8] In addition to all the premium features, Family users also get:

LastPass is a private company. Its current valuation is unknown. However, in 2015, LastPass was sold for $110 million.[9] Since then, the company has grown significantly and is probably worth much more. Over the past three years, LastPass has grown its revenue by over 50% year-over-year on average.[10]

LastPass’s estimated revenue is $69.6 million per year.[11] It is unclear if the company has raised any funding from investors as there are no listings of venture capital investments in the firm on Crunchbase. If they did receive funding, the arrangement and details were kept private.

LastPass is most likely profitable. The company has expanded rapidly and invested in product development and infrastructure without external funding. This suggests that it makes enough from its operating revenue to sustain and grow the business.

However, because LastPass is a private company that doesn’t share its financials, it is unclear how profitable they might be.

In conclusion, we’ve seen that LastPass has found success in the competitive world of password management tools. They have done this by providing a service that is easy to use and understand and making sure that it’s available on as many platforms as possible. They also have a strong focus on security, which is something that will always be important in the world of technology.

The company has been around since 2008, which means it’s had plenty of time for its business model to mature and grow into something that works for them.

It is clear that LastPass has found a way to make money, and they do it in a way that is easy for you (the user) to understand. They do this by charging you for the premium version of their product and giving away the free version. This makes sense because if everyone had access to the full version of LastPass, then there would be no incentive for people to upgrade to premium.

There are many other ways that LastPass could make money as well. One idea would be to start selling ads on their website or within their app; however, this might upset users who don’t want ads on their browsers or apps. Another way would be to charge businesses that want access to more features than consumers get in order for them to use LastPass with their employees or customers. The possibilities are endless!

If you’re interested in learning more about these services or seeing what else LastPass has to offer, check out their website!

We hope this blog has been helpful! If you have any questions about anything we covered here, please feel free to reach out.