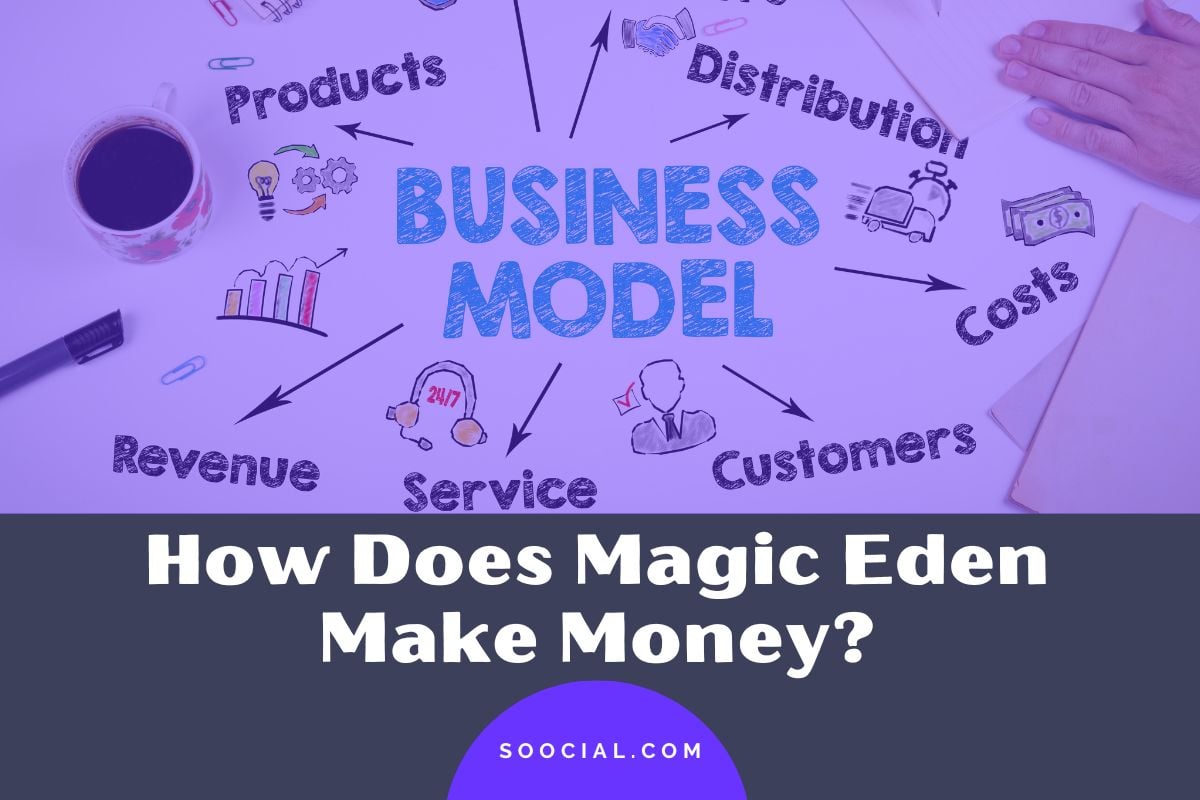 Magic Eden is a popular Non-Fungible Token (NFT) marketplace where users can buy or sell NFTs. It also functions as a primary marketplace, allowing users to mint NFTs.

Magic Eden primarily makes money by charging 2% fees for every transaction on their platform. The company also makes money from Magic Tickets.

Founded in 2021 by a group of four crypto entrepreneurs and software engineers, Magic Eden was intended to provide users with a safe and accessible Solana NFT marketplace. It placed a strong focus on its community from the start, and provided unique rewards to members who purchased its Magic Tickets.

What is Magic Eden & How Does It Work?

Magic Eden is a non-fungible token (NFT) marketplace built on the Solana blockchain. It is a platform where users can buy and sell unique pieces of digital art that are typically available in photo format. Since Solana uses a proof of history consensus mechanism, transaction processing speeds are very high on the network.

Simultaneously, transaction costs are much lower compared to a proof of work blockchain like the original Ethereum. The low transaction costs and high processing speeds make Magic Eden an excellent platform for buying and selling NFTs. Each NFT is unique and carries proof of ownership within a token in the Solana blockchain.

Creators of digital art can receive royalty payments on Magic Eden every time their work is sold to a new buyer. This is a characteristic inherent to NFTs, irrespective of the platform used to trade them. However, the use of a proof-of-history blockchain like Solana incentivizes more people to buy and sell NFTs due to the network speed and low transaction costs.

But it is also cheaper compared to buying the same NFT through a secondary market like Magic Eden. To provide additional functionality and stand out from other NFT marketplaces, Magic Eden has a launchpad section. Here, users can directly mint NFTs from newly launched collections.

Each collection on launchpad shows the NFT theme and price, along with the number of units being sold. Often, the creator’s website and social media accounts are linked in the launch page. There are NFTs for games, shows, web3 apps, and more.

Each NFT collection featured on launchpad has a timer showing the sale duration and time to launch. For creators, Magic Eden is the secondary marketplace of choice because of the massive liquidity potential that it guarantees. According to data posted by Magic Eden, the site accounts for 90% of daily traded Solana NFT volume.[2]

It is also the best way for a creator to gain exposure for their brand, since Magic Eden gets as many as 10 million unique user logins each month. Magic Eden also boasts higher average session times, at 14 minutes per user.[3] These numbers are in a different league compared to other web2 and web3 marketplaces, which is an indicator of Magic Eden’s higher engagement rates.

Magic Eden also helps NFT creators execute a cross-launch on both Ethereum and Solana at the same time. To get listed on Magic Eden launchpad, creators fill out an application form. Here, they enter basic information regarding their project and the network they intend to launch it on.

In addition to its marketplace and launchpad, Magic Eden also has a gaming section. Currently, the platform hosts over 35 games from various genres. Users can entertain themselves and win crypto rewards at the same time.

To get started on Magic Eden, users must first have a Solana compatible wallet. There are several decentralized finance (DeFi) apps that connect users to the Web3 and blockchain world. Magic Eden recommends Phantom wallet as an easy way for beginners to transact with the Sol token.

By using a crypto exchange such as Binance, owners of a Phantom wallet can fill their wallet with funds. Binance allows users to buy Sol using fiat currency. Once users have funds in their wallet, they can simply connect it with Magic Eden.

There is no need to create an account, nor does Magic Eden ask users for one. It is an inclusive platform, free to all. Anonymity is a huge bonus of using the Magic Eden marketplace, since it doesn’t associate purchases with names or identities.

Magic Eden supports both Solana and Ethereum for purchases. Some of the popular Solana wallets supported by the platform include Slope, Exodus, Brave, and Solflare. Ethereum wallet support includes MetaMask, WalletConnect, and Coinbase.

For users who are new to the world of Web3 and NFTs, Magic Eden also supports credit cards as a payment method. Users can switch from crypto to credit cards.

The details page also contains metadata, information about the creator, and market trends. Users can also view the creator royalty percentage and transaction fee percentage on this page. An NFT’s MoonRank and HowRare.is rank is displayed next to the title. These are ratings that help buyers understand the value of an NFT.

Magic Eden operates as both a primary and secondary market for NFTs. While the platform has no listing charges for creators, it takes 2% on every transaction. These transaction charges are separate from royalty amounts set by creators.

Since Magic Eden is the top NFT marketplace on Solana, it has no real competition. It offers users a very convenient means to research and buy their favorite NFTs, resulting in huge amounts of daily traffic. Magic Eden supports payments through both Ethereum and Solana wallets.

It even allows users to pay with their credit cards. By simplifying the process of purchasing an NFT, Magic Eden encourages users to spend more money on the site. It also adds value through the company’s launchpad section and gaming section.

Users spend more time on Magic Eden compared to other NFT marketplaces, because it has a wider variety of listings and more activities to engage in. There are games, auctions, launches of new NFTs from popular creators, and exclusive community programs.

Magic Eden also has its own collection of NFTs, called Magic Ticket. Funds from purchases of Magic Tickets go directly to the company. Users get various benefits like access to MagicDAO, which is a discord-based Decentralized Autonomous Organization (DAO).

Magic Eden’s biggest rival is OpenSea, as they offer similar services. While OpenSea started out on the Ethereum network, it integrated the Solana blockchain in July 2022.[5] This made the company a direct competitor to Magic Eden.

User onboarding is a streamlined process on both platforms with very few steps. However, Magic Eden supports a higher number of Solana wallets. For creators, OpenSea charges a slightly higher transaction fee at 2.5% of the sale price. This makes Magic Eden a slightly more attractive alternative since it charges 2% per sale.

Magic Eden is a private company and does not release its financials. While the company is estimated to have an annual revenue of around $13.3 million per year, it also has considerable expenses.[7] These include things like staffing, hosting, platform, and development expenses.

Due to the lack of data on Magic Eden’s financials, it is unclear how much the company spends on expenses.

How Does Magic Eden Make Money?

As Magic Eden is a private company, details about how much revenue it generates from these different revenue streams aren’t public.

Whenever an NFT is sold on the Magic Eden marketplace, the company charges a 2% transaction fee. This is equal to 2% of the sale value, and is separate from the royalty fee.

Magic Eden doesn’t charge any listing fees to creators, and honors their royalty contract. By charging a 2% fee on every transaction, Magic Eden generates significant revenue since many NFTs sell for large amounts of money.

These are NFTs created by Magic Eden. They are used as a means to foster community interaction. Magic Ticket users enjoy unique benefits, like access to the exclusive discord-based DAO.

Customers can purchase three different tiers of Magic Tickets from the marketplace. These are Normie, Degen, and OG, in the order of least to most expensive. Each ticket tier has a fixed floor price and total supply.

Magic Eden is currently a private company, and its financials aren’t available to the public. Right now, it is unclear what the company is valued at.

Annual revenue for Magic Eden is estimated to be around $13.3 million.[10] But there is no official report to verify this. Given the recent upward trend in the NFT market, it is possible that Magic Eden could be making more than this figure.

Magic Eden is likely profitable. The company has very little overhead and likely employs a small workforce due to its mostly automated and online nature. However, the company could also be facing financial difficulties in 2022 due to the downturn in crypto and NFT markets. That’s led many investors to stop actively trading or investing in NFTs.

It also has multiple reliable sources of revenue generation. The global NFT market size is estimated to reach $211.7 billion in 2030, so Magic Eden still has room to grow and offer new services.[11]

So there you have it! Magic Eden is a marketplace for NFTs on the Solana blockchain that’s taken the crypto world by storm. It’s clear that Magic Eden has a strong business model and is well-positioned to thrive in the future. But what does this mean for investors?

One thing is certain: Magic Eden has made an impact on the blockchain industry and will continue to do so as long as it continues to execute its strategy.

Thanks for reading—and have a great day!

335 NFT Names to Transform Your Art Into a Digital Empire